Modern Muscle at Its Rustiest 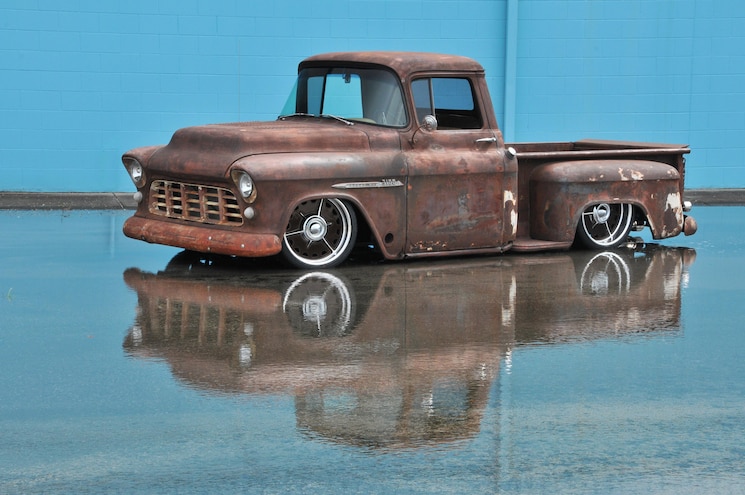 The team at StreetHeat in Melbourne, Florida, has been turning out distinctive custom vehicles for more than a decade. Matt Verzi and Gavin Broome have more than 30 years of combined experience and specialize in one-of-a-kind, high-performance rides. They keep in touch with their customers after the sale and have often been contacted later for even more refinements. That was the case with repeat customer Eddie Atkins. About five years ago, Eddie asked the pair to create his dream ride, providing them with a list that began with rusty but reliable, rockers in the weeds, and a high-performance V-8 under the hood as well as many other modern upgrades. After an active search, Matt and Gavin found this ’55 Chevrolet 3100 pickup in Lakeland, Florida. Patina trucks had become their specialty, and they bought this Mother Nature–inspired classic knowing it would work for Atkins. The plan was to bring it back to life with new upgrades at every level while leaving the nicely aged patina alone. 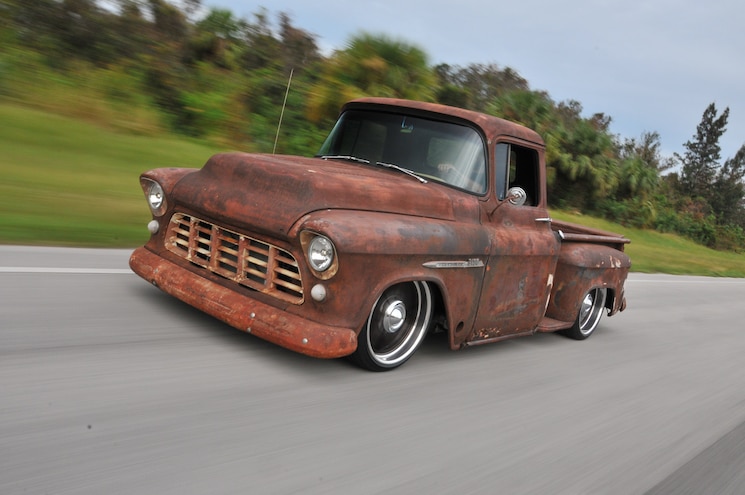 View Photo Gallery | 11 Photos
Photo 2/11   |   1955 Chevy Apache Rustina Revival Drive
Chassis work is always the first priority, and the team began by boxing the rails and installing a Camaro clip up front. A triangulated four-link from Competition Engineering holds an 8.5-inch, 10-bolt Chevrolet Nova rear, fitted with 3.73 gears and an Eaton Posi. Work progressed smoothly and, within three months, the truck rolled out with air ride, C5 Corvette brakes, custom wheels, and a brand-new interior, along with a modern Chevrolet fuel-injected 5.3L V-8. Eddie enjoyed the truck for a couple of years and when it was time for a change, he contacted StreetHeat for assistance in selling the truck. A few phone calls and a few photos later, and the connection was made with a repeat customer, Alan Donatelli from Youngstown, Ohio. His guidance to the team at StreetHeat? “Let’s make a good truck even better!” 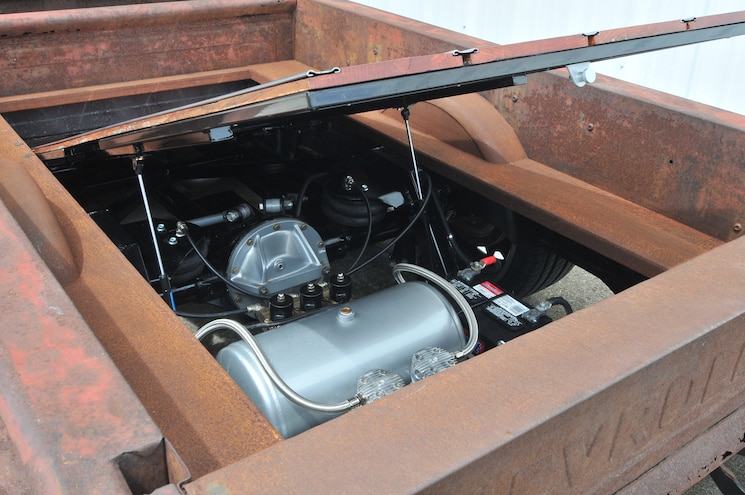 View Photo Gallery | 11 Photos
Photo 3/11   |   1955 Chevy Apache Rustina Revival Lift Up Bed
The truck was shipped from Cape Carteret, North Carolina, to Melbourne, Florida, complete with the new owner’s list of upgrades. Seeing it on the transporter after its five-year absence brought back a lot of old memories for the team, especially listening to the big V-8 burbling through its custom exhaust. Alan wanted American Racing rims, new instruments, a custom intake, more horsepower, cut-outs on the side-exit exhaust, and a lift bed with new wheel tubs. 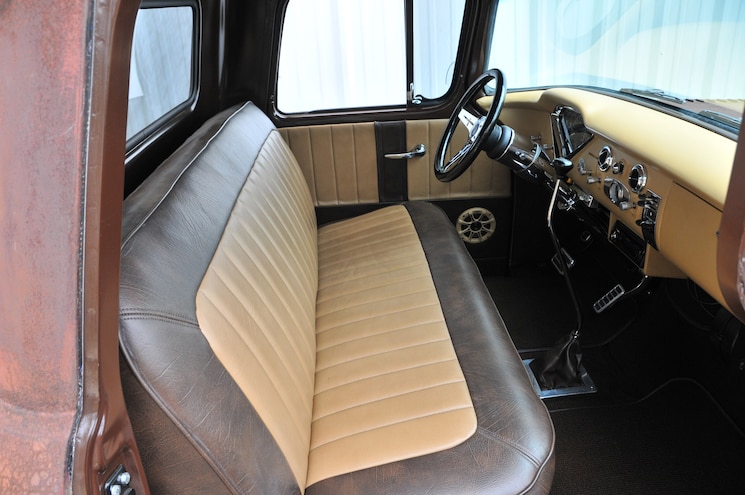 View Photo Gallery | 11 Photos
Photo 4/11   |   1955 Chevy Apache Rustina Revival Interior
Checking items off the list began inside with replacing the Dolphin gauges with the Dakota Digital HDX package that incorporates the latest LCD screen. A central Viair gauge was added to monitor pressure in the air suspension, now upgraded with 2,600-pound rear bags to soften the ride. Additional comfort in the cab was achieved with a Vintage Air A/C unit blowing through vents in the center and both sides. The tall Lokar shifter, aftermarket pedals, TCI column, and Grant wheel gave a modern feel to the controls. Filling the cab with retro sounds began with a Kenwood head unit feeding a pair of 6.5-inch Kicker component sets mounted in the doors. The bench seat was original to the truck and was reupholstered by Gavin during the initial build—his very first attempt at that sort of thing. He also made the door panels to match, and all held up beautifully. The dash was painted a satin cream matched with a chocolate brown. 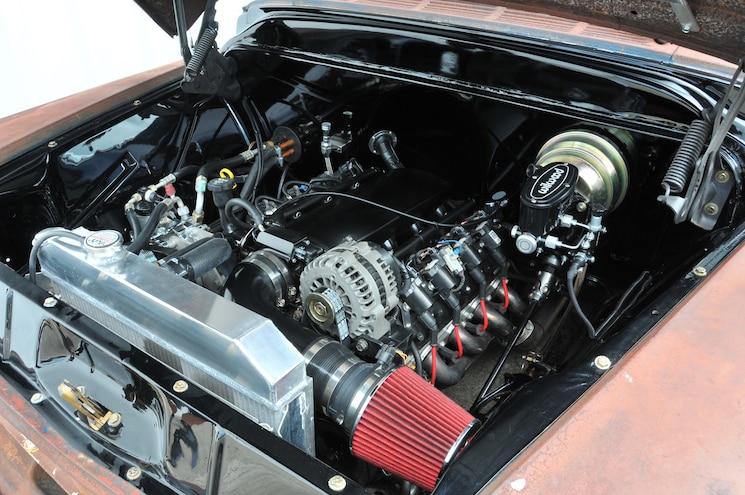 View Photo Gallery | 11 Photos
Photo 5/11   |   1955 Chevy Apache Rustina Revival Engine
Power was next, and although the original 5.3L LS engine was still in great shape, Alan wanted to add a combination of increased performance and unique cosmetics. It was transformed with a Sharp Customs aluminum sheetmetal intake, hotter cam, cold-air kit, exposed coil packs, and stainless-steel shorty headers flowing into a custom MagnaFlow exhaust. The new system features a pair of Noweeds electronic diverters mounted after the X-pipe. With some careful plumbing, exhaust gases now exit through the front fenders for an aggressive performance rumble. With the diverters closed, exhaust travels to the rear and exits through twin pipes in the middle of the bumper. The final step was showcasing the beautiful chassis work with a lift-up bed floor. A steel framework was created, rear tubs were added and aged to match, and the 100-year-old pine bed floor was stained a rich Sedona Red. Door poppers activate the bed, and a pair of gas struts holds it open, giving spectators a preview of the advanced engineering underneath. Finally, the truck now rolls on a set of custom-painted American Racing Stella wheels (20x8.5 up front and 20x10 in the rear).
Although the bodywork is a little rougher than the StreetHeat team usually likes, the owner enjoys every undisturbed rusty inch. The louvered hood was probably done back in the ’70s and is now fitted with a sheetmetal barrier underneath to keep the engine dry during the rain. It took just a little more than a month to tailor the truck for its new owner, and it’s already on its way back to Ohio where Alan will be enjoying his rejuvenated ride for years to come. Alan sends special thanks to Matt and Gavin from StreetHeat along with Alan Ethier.