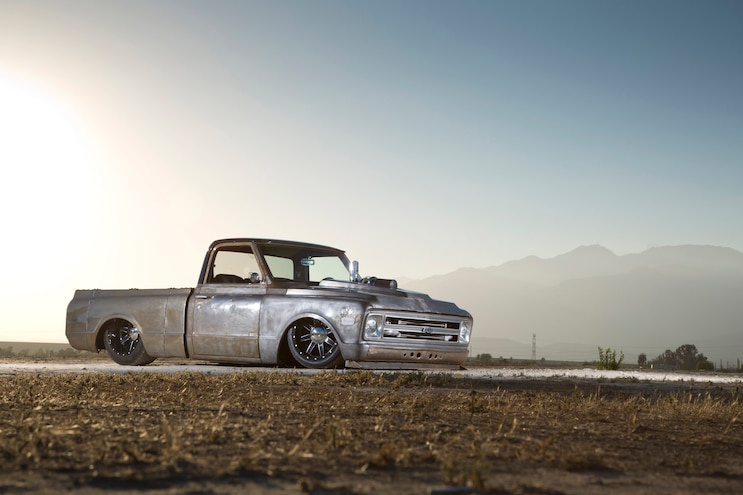 Diesel swaps of all sorts are wickedly popular these days. Enthusiasts change powerplants (from gas to diesel, or from one brand of oil-burner to another) for good reason, as diesels are quite powerful when built correctly. With that being said, having diesel power in a classic truck is not that big of a shock. In this instance, however, the vehicle is far from ordinary. The ’68 Chevrolet C20 featured on the following pages is a piece of rolling art that happens to function quite well with a diesel under its hood. At least that's how its owner, Jeremy Daeseleer, sees it.
One thing you are probably asking is how a vehicle like this comes to life. Well, the evolution of Jeremy’s 700hp C20 actually started with a 1hp vehicle. Of course, we’re not talking about a truck; the build began with a jog cart—a two-wheeled, horse-drawn cart.
Jeremy and his wife, Amanda, are all about training horses. To display his passion for her and the sport of showing horses, Jeremy restored a vintage Jerald Sulky jog cart. It turned out beautiful, but Amanda’s horse thought it was food and did some damage to it that had her very frustrated. Since they were demotivated at the time, the jog cart was traded for a golf cart that was formerly used at the Stardust Resort and Casino in Las Vegas. That cart was then tricked out with air ride and even had a stake bed.
However, tragedy struck again when a large truck ran into it and damaged the cart’s paint. It was traded for this truck, then known as “the Annoying Orange.” The ¾-ton longbed rig was bright orange and had a big-block Chevy gas engine under the hood. At that point, it was just a simple cruiser, but things were to change, as one of Jeremy’s buddies, Randy Johnson, found out a local shop needed a truck to work on for a TV show. Apparently, the shop’s scheduled ’53 Chevy burned in a fire and the crew needed something to work on ASAP. 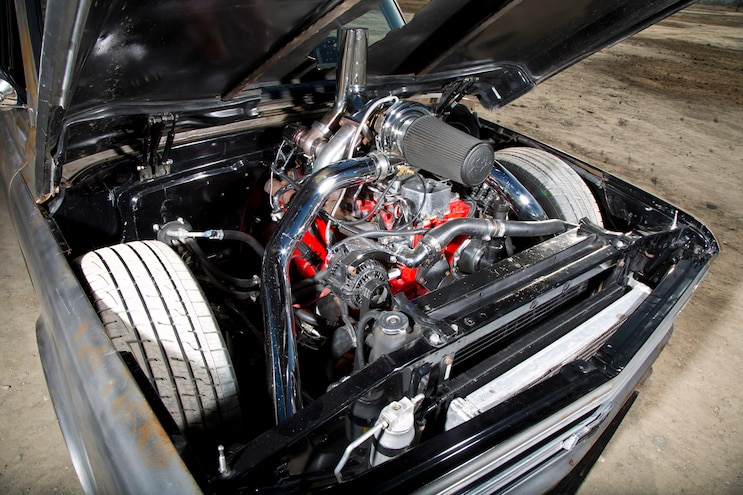 View Photo Gallery | 28 Photos
Photo 2/28   |   Creating all the power for this one-of-a-kind truck is this 5.9L Cummins engine that was built by Industrial Injection.
Jeremy volunteered his truck for the build, and this is when its transformation into the Coal Cart (his name, not ours) began. The truck was outfitted with an Industrial Injection–built 5.9L Cummins engine with a 72mm Viper PhatShaft turbocharger and a 47RE four-speed automatic transmission. The body was also stripped to bare metal and the bed was cut down to a short version. The suspension was also dropped a bit, but the truck wasn’t nearly as low as it is now. 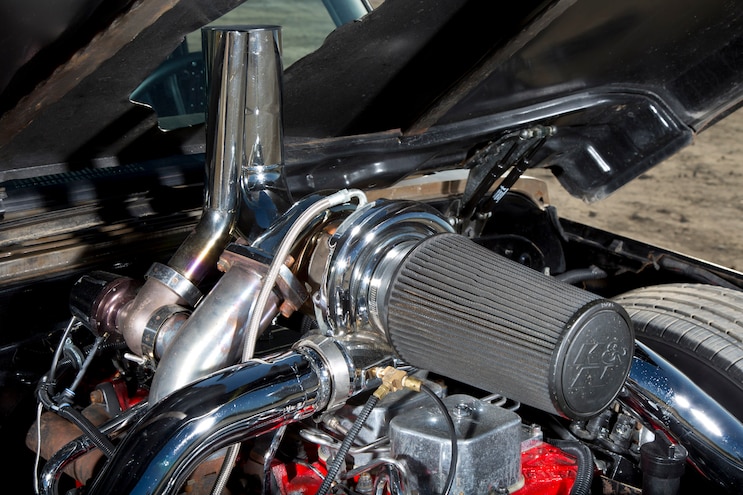 View Photo Gallery | 28 Photos
Photo 3/28   |   Industrial Injection’s 72mm Viper PhatShaft turbocharger forces copious amounts of boosted air into the 5.9L Cummins.
When Jeremy got the C20 back from the shop, it was only “TV ready” from an appearance standpoint, as the engine and transmission suffered catastrophic damage (in separate incidents).
Frustrated at the situation, Jeremy turned to Travis Pruis of CTP Concepts in Gardnerville, Nevada. Travis was able to encourage Jeremy to get his truck ready for the Lone Star Throwdown in Conroe, Texas. Once all the parts showed up, there were only 45 days before the big show.
With the drivetrain back in running order, the C20’s suspension was revamped with parts from CB Chassis Products. The stock front setup was swapped out for the company’s independent front suspension system with rack-and-pinion steering, while the rear frame was cut off behind the cab and CB’s custom backhalf with triangulated four-link was attached. The suspension utilizes a set of Slam Specialties airbags for a smooth ride and the ability to lay the truck on the ground when air is released from the system.
The interior is equipped with custom leather seats and Atomic Armadillo Metal Fab door panels. On the dash is a set of Classic Instruments gauges that helps Jeremy monitor the drivetrain vitals. To the right of the gauges are controls for the Vintage Air SureFit air-conditioning system and an AccuAir e-Level controller that manages the suspension. Below these accessories, a custom center console houses a B&M shifter along with AutoMeter Competition Instruments transmission temperature, boost, fuel pressure, and pyrometer gauges. 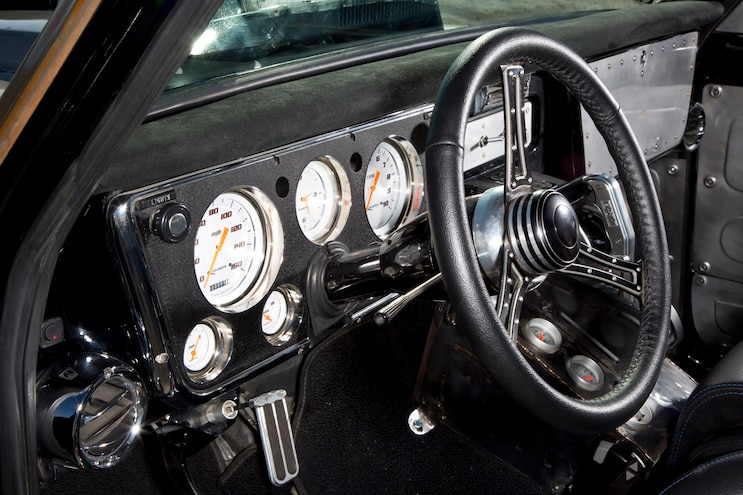 View Photo Gallery | 28 Photos
Photo 4/28   |   Jeremy modified the dash to match the exterior. It houses the Classic Instruments gauges that help him keep an eye on drivetrain activity. 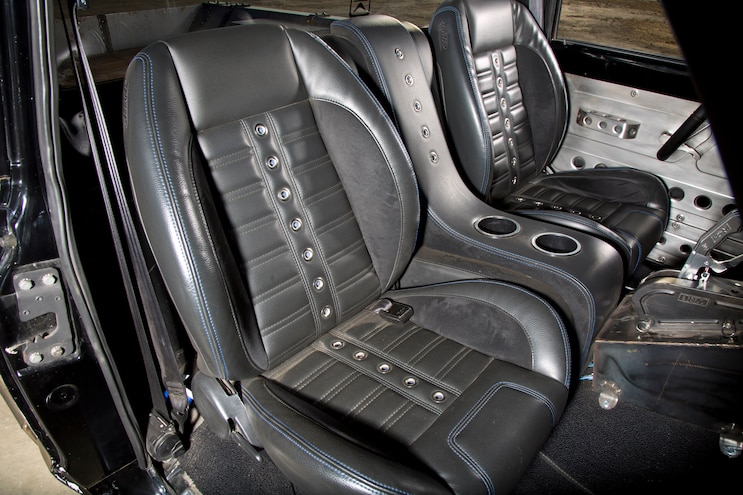 View Photo Gallery | 28 Photos
Photo 5/28   |   Chevrolet C-Series trucks of the ’60s are factory-equipped with a flat bench seat. Jeremy upgraded his rig with custom bucket seats to add comfort on long trips.
The exterior was kept in raw condition but upgraded a bit. In the front, a steel front pan with a handmade chin spoiler was added to replace the bumper. Moving up, the cowl hood was fabricated by welding on the side sections of a spare hood. In the back is a roll pan and a custom inner bed. The bed floor is comprised of reclaimed wood that was salvaged from an old barn. 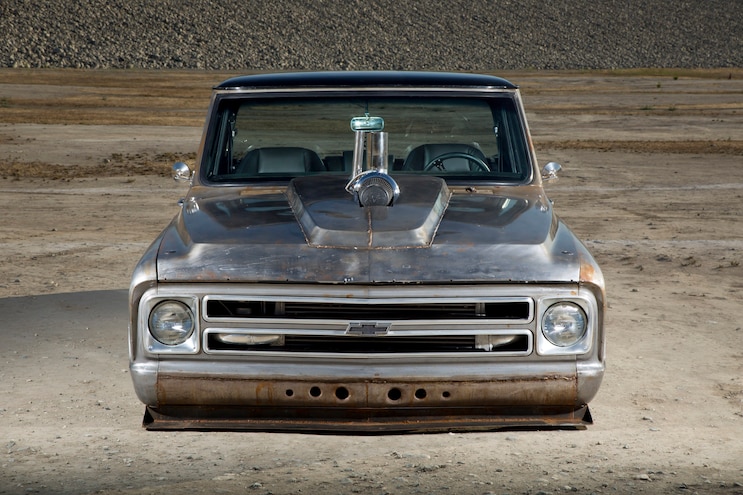 View Photo Gallery | 28 Photos
Photo 6/28   |   Front-end features are highlighted by a custom cowl-style hood scoop that was made by welding two side sections of a spare hood onto the original. The bumper was also removed, and a front pan and chin spoiler were made to complement this wild ride’s fascia.
When it was completed, this truck made a 4,500-mile round-trip to Texas and back—it’s no trailer queen. In fact, a few video clips of its maiden voyage went viral.
There is more to come. Jeremy tells us his next project is creating a lifted version of the truck. The plan is to haul horses with the C20, so he can marry both of his interests. We’re sure it will be another stunning ride, as Jeremy did a killer job picking up the pieces on this one and creating a truly unique rig. 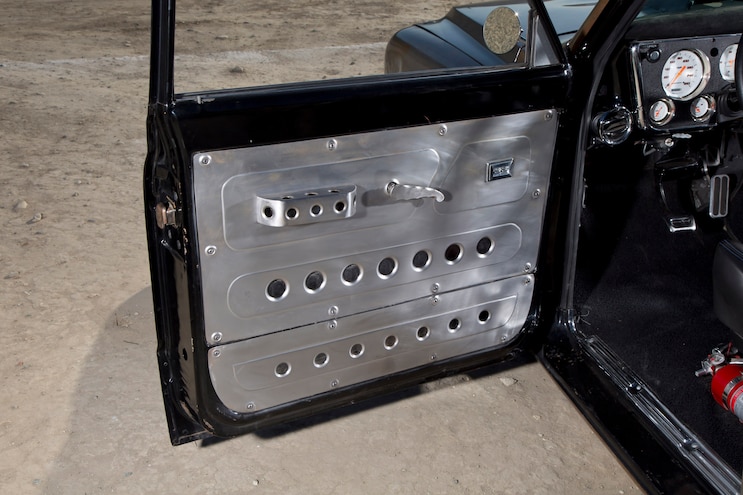 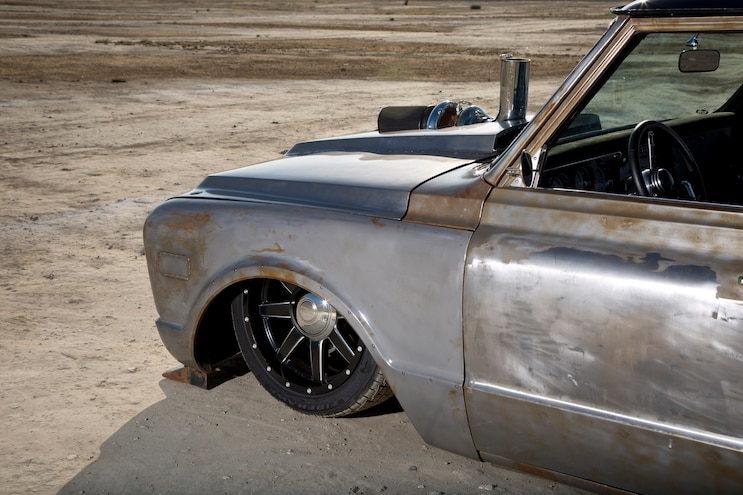 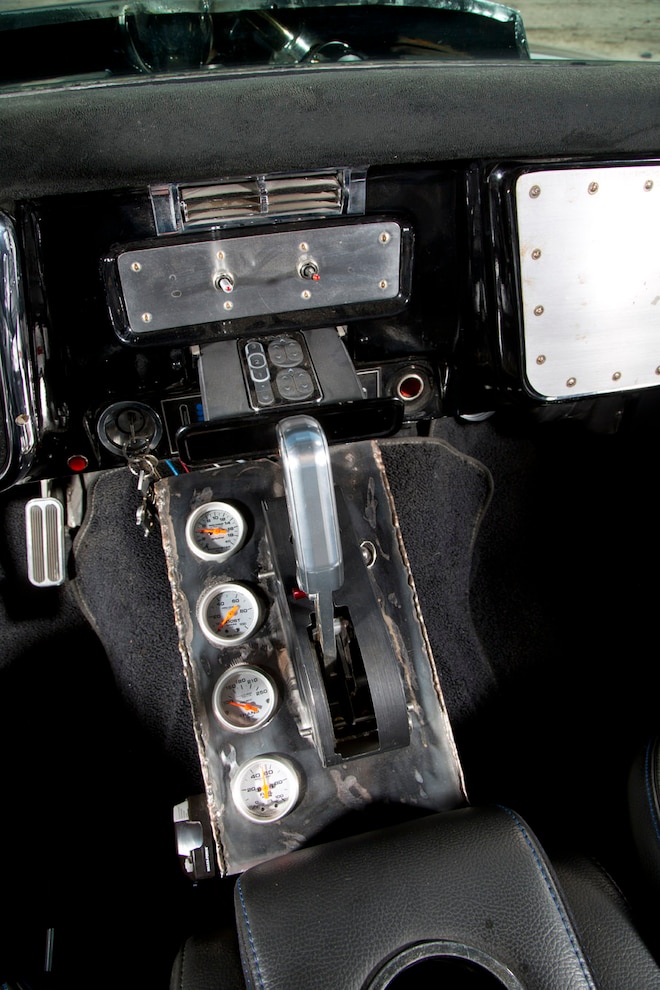 View Photo Gallery | 28 Photos
Photo 9/28   |   An AccuAir e-Level controller is held in place with a CTP Concepts custom ashtray, which slides into and is concealed by the dash. On the floor is a custom console that holds the B&M shifter and several AutoMeter Competition Instruments gauges. 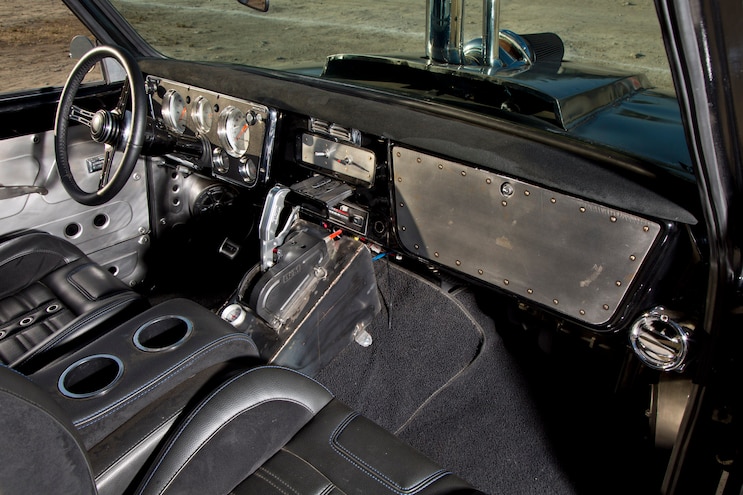 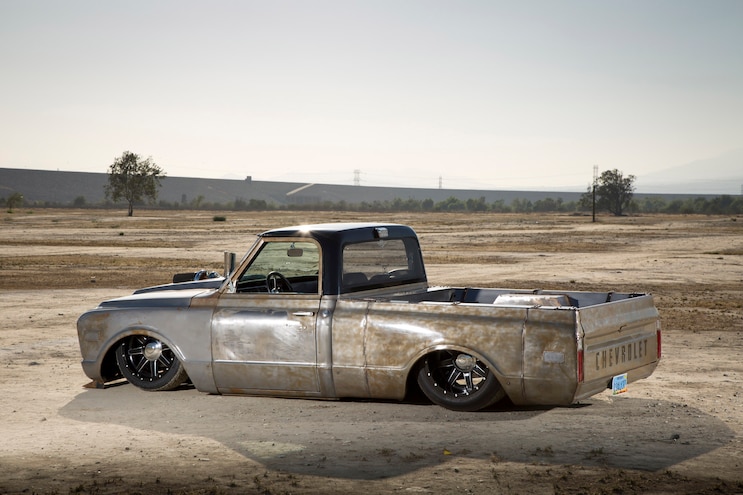 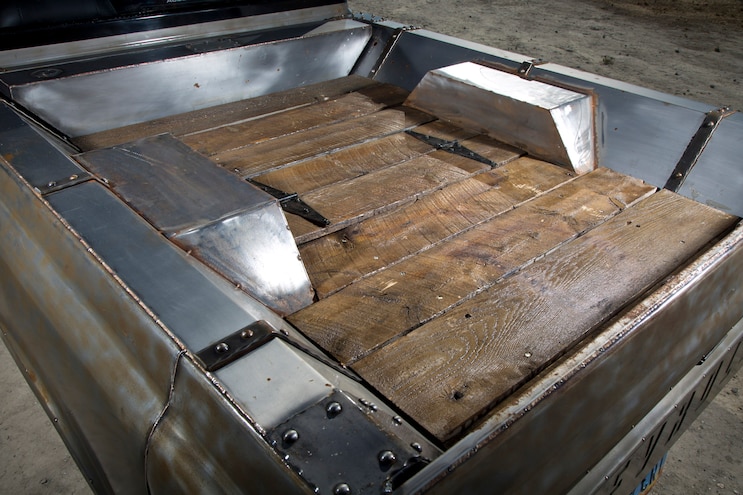 View Photo Gallery | 28 Photos
Photo 12/28   |   Custom wheel tubs and inner bedsides were created with help from Travis Pruis at CTP Concepts. The bed’s floor is comprised of reclaimed wood from an old barn. 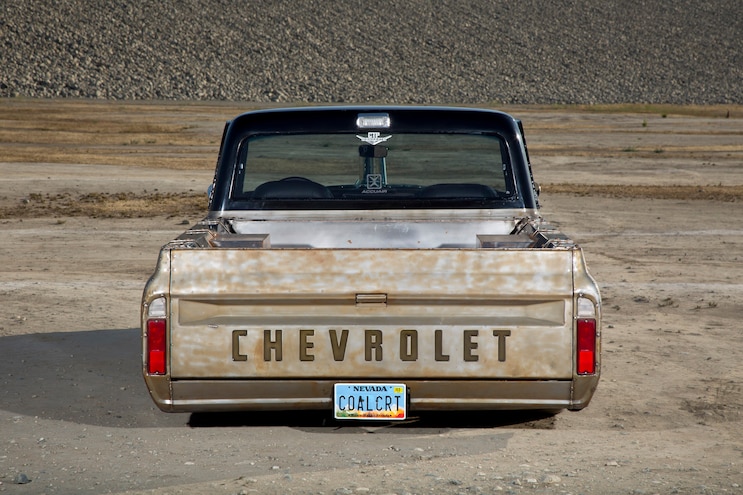 View Photo Gallery | 28 Photos
Photo 13/28   |   To clean up the back of his truck, Jeremy removed the rear bumper and replaced it with a steel roll pan. View Photo Gallery | 28 Photos
Photo 14/28   |   Fuel Maverick wheels (20 inch) fit the bill here, but they are modified with “Poverty” hubcaps to tie them into the vintage of this classic Chevy.