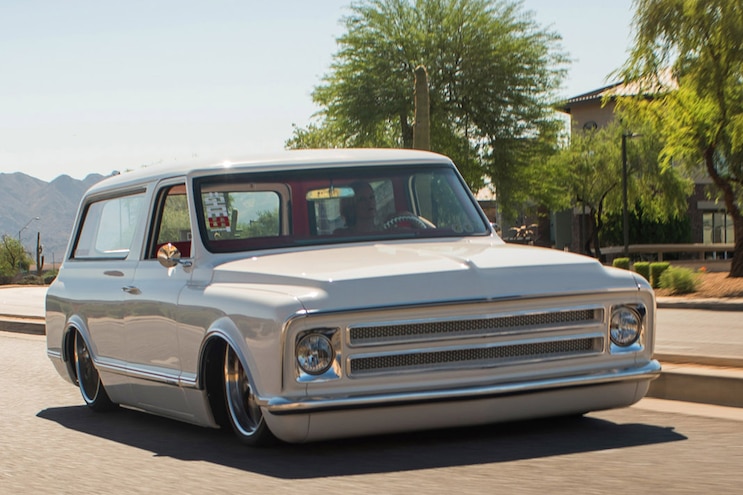 If GM had built the Tahoe back in 1968, this is what that product would look like after today’s custom enthusiasts got their hands on it. This one-of-a-kind Chevrolet is the product of creativity, imagination, modernization, and a talented skillset. Owner Jason Ellis of Visalia, California, is a longtime friend of builder Brandon Sisco from Barrett Jackson Garage. The pair thought up this project, contemplating what could have been a General Motors concept vehicle that got left in a barn for decades. As a huge fan of the ’90s OBS Tahoe, Jason wanted a two-door version inspired by the ’67-to-’72 body style. Beginning life as a three-door Suburban, this truck been drastically shortened—but don’t call it a Blazer! There is not a removable roof, zero K5 parts were utilized in the build, and the wheelbase is not as short as a Blazer. This SUV has a style all its own, and that was the whole point. The name Ghoesst is a play on its white paint, Tahoe (hence the “hoe”), and the LSA SS powerplant. 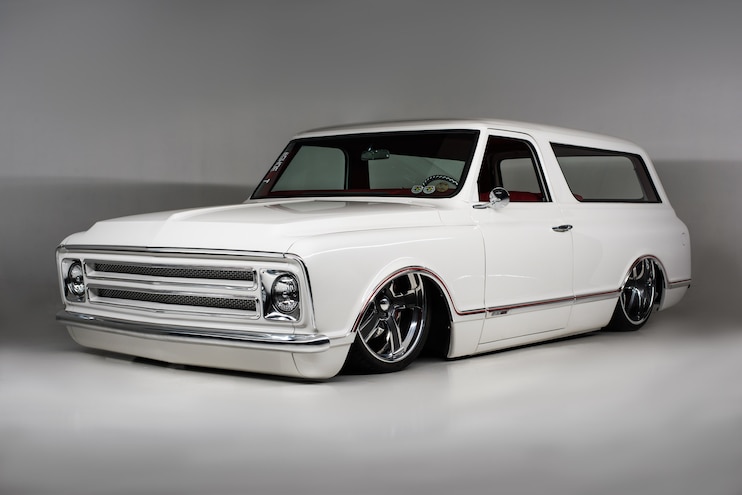 View Photo Gallery | 13 Photos
Photo 2/13   |   1968 Chevrolet Tahoe Concept One Off Ghoesst
Since the focus was on shortening the Suburban, Brandon cut 34 inches out of the body as a first step. If that isn’t nerve-racking enough, more cuts were made, including 2.5 inches chopped from the top and a 2-inch body drop to eventually lay it on the pavement. To give the truck a more flowing, laid-back look, the squared Suburban front doors were replaced with C10 versions. The pillars were custom modified, along with the door frames and wheelbase. With those major structural changes complete, the extensive list of cosmetic body alterations could begin to take shape. The list includes a front roll pan, as well as fender extensions by Bob Grant, shaved front markers, C10 truck taillights, reshaped quarter panels, a custom rear hatch, and a new cowl to rid the unsightly windshield wipers from the front. 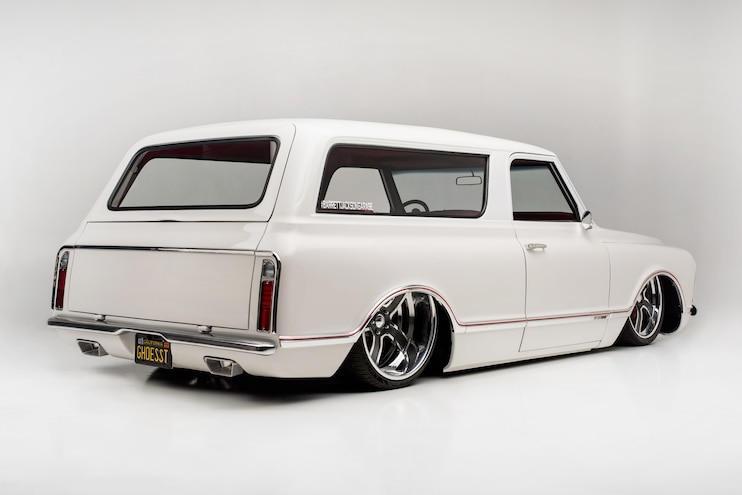 View Photo Gallery | 13 Photos
Photo 3/13   |   1968 Chevrolet Tahoe Concept One Off Ghoesst Rear
The highly transformed body was going to need a chassis built to fit its new length. Brandon called up GSI Fabrication to do a rear setup with RideTech sleeve bags, a parallel four-link and Watt’s linkage. Up front, Brandon used a set of 2.5-inch drop spindles from Classic Performance Products and Firestone 7-inch double-bellow airbags to bring it all the way to the ground when aired out. Stopping power comes from four Baer disc brakes (14-inch in front and 12-inch in the rear). The chassis has been powdercoated in cast gray to match the 22-inch Intro Wheels. As another way to keep this build as clean as possible, all fuel, air, and brake lines were hidden from sight. 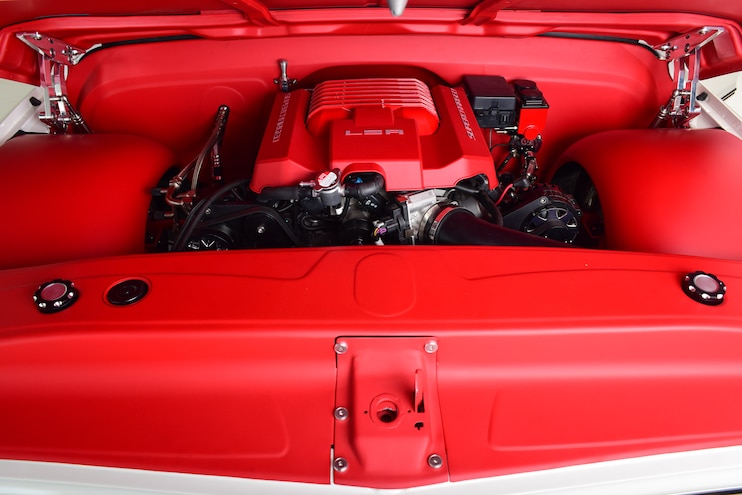 View Photo Gallery | 13 Photos
Photo 4/13   |   1968 Chevrolet Tahoe Concept One Off Ghoesst Engine
The framerails needed a motor installed between them that would not only be a showpiece but also have horsepower on demand. A ’16 GM Performance LSA Supercharged 6.2L Connect & Cruise was installed to do the job. But that was just the first step—albeit a big one. A GM 12-bolt rearend was narrowed 4 inches to be able to tuck the rear wheels and custom exhaust under the body of Jason’s ’68. After some tuning at AZ Pro-Dyno Tune, the now-two-door makes more than 475 rear-wheel horsepower and more than 450 lb-ft of torque.
Leaving no doubt this creation was meticulously built in every aspect, the interior and audio work was handed over to Frank Ceballos of Ceballos Customs. The red leather and suede are easily noticeable in contrast to the Audi White exterior paint, but there are some hidden gems inside, too. The front seats are modified versions from a ’98 Suburban and the rear from a Tahoe of the same year. The dashboard has been relieved of its air vents, making room for a custom head unit and air-conditioning controls. Other interior additions include a custom dash pad, console, Ron Francis push-to-start wiring, ididit steering column, and Intro steering wheel. 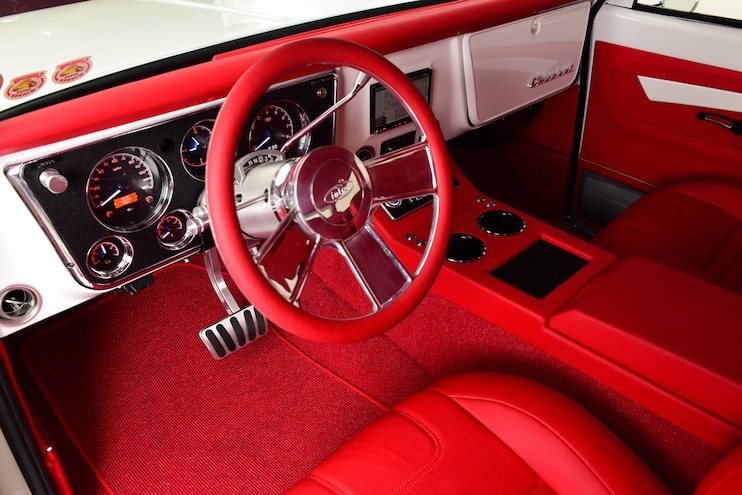 View Photo Gallery | 13 Photos
Photo 5/13   |   1968 Chevrolet Tahoe Concept One Off Ghoesst Interior
A project like this doesn’t come together overnight. However, it was built completely in-house at Barrett Jackson in just 4½ months, which seems nearly impossible considering what has been done here. It debuted at the SEMA Show and has received a lot of praise, including an Innovation Award, Builder’s Choice, and finalist as Truck of the Year for Good Guys. The only thing left to do now is drive it and enjoy it.