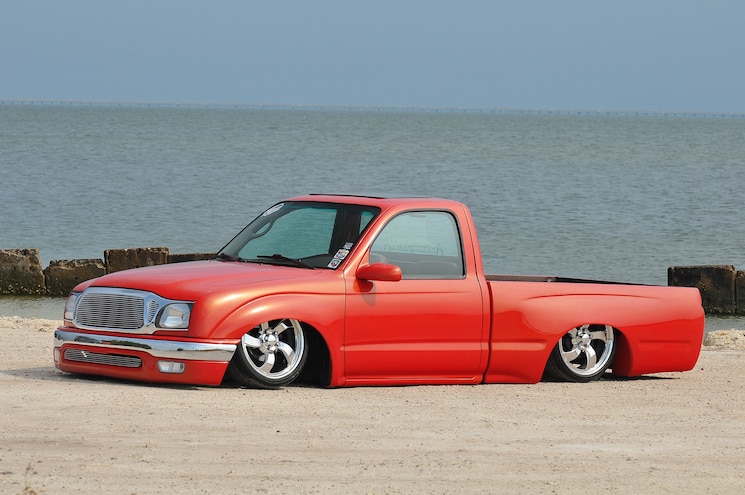 Everyone knows that in the truck culture, trucks get passed around like a football during an NFL preseason game. Timothy Saneewong found that out the hard way. But before that, he spent years looking through truck magazines and working on import cars to make them flashy. Although his love was for trucks, he seemed to keep getting imports because they were more easily affordable. “I remember I was 19 years old and I saw this Toyota Tacoma that I fell in love with,” Timothy tells Truckin. “I knew I would one day own something similar.” That mini-truck was Tony Rispoli’s ’02 Toyota Tacoma named E10Pvmnt, which had galvanized Timothy’s mini-inspired Honda build. 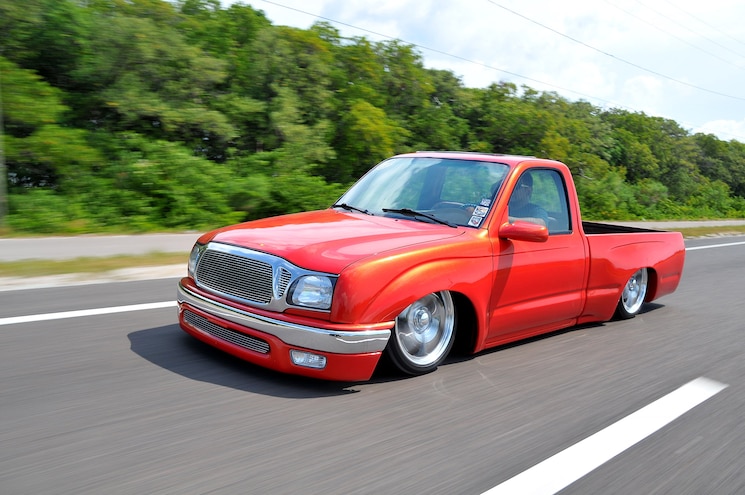 View Photo Gallery | 12 Photos
Photo 2/12   |   2002 Toyota Tacoma 4ChunTaco Drive
Timothy contacted Tony and tried to work a trade for his Honda to get the Tacoma, but that clearly wasn’t happening. He continued to work on his import, bagging and shaving it to resemble the Toyota. During that time, Timothy started his own custom paint and body shop called Sureal Customz Paint and Body in Central Florida. One day while browsing a mini-truck magazine, Timothy found another amazingly built Toyota Tacoma that he fell in love with—only to find out it was the same one Tony owned but completely redone. This time, the truck was named Unsloppy Seconds and carried the same unique bodywork but different paint. 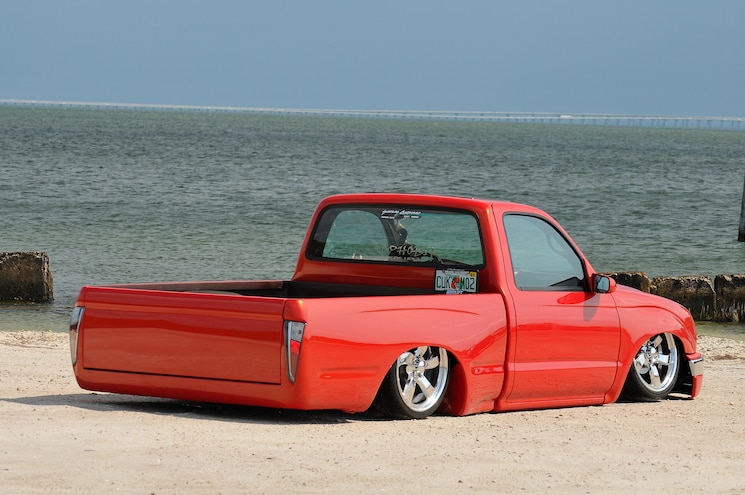 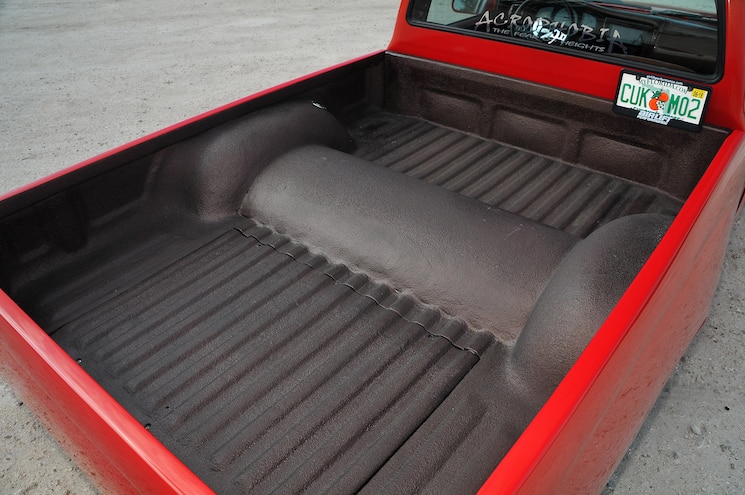 View Photo Gallery | 12 Photos
Photo 4/12   |   2002 Toyota Tacoma 4ChunTaco Bed
Once again, after a few calls, Timothy was unable to procure the elusive Tacoma from the second owner. While he continued to master his craft at his custom shop, his club member from Northwest Florida had purchased and was rebuilding a Toyota Tacoma that caught Timothy’s eyes. As luck would have it, the Toyota was the same Tacoma he had been trying to get. Bought by Keith Bryan and completely redone in bright red, it had once again graced the fine pages of a mini-truckin magazine, this time with the moniker Redtro. Now that it was closer and in the same family as Timothy, he bided his time and offered his now completely custom Acura import and a stock truck he had purchased. Keith agreed to the trade and Timothy finally got his unicorn, which he proudly decided to name 4ChunTaco (to commemorate being its fourth owner and incorporate a play on words since he’s Asian). 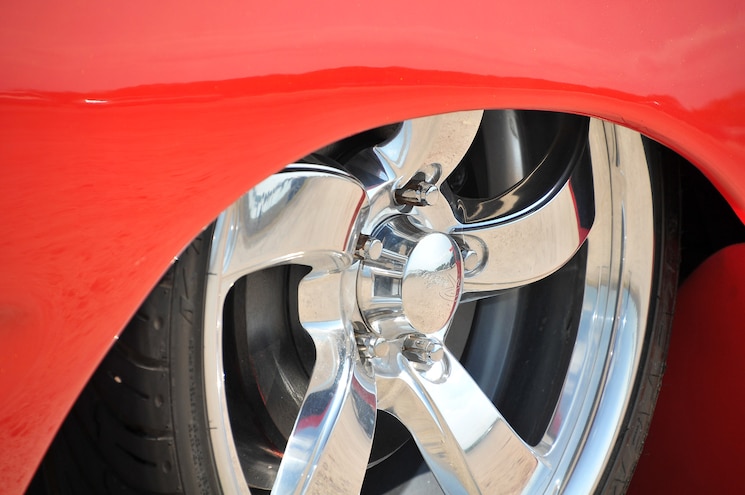 View Photo Gallery | 12 Photos
Photo 5/12   |   2002 Toyota Tacoma 4ChunTaco Wheel
Timothy kept it as a daily driver but kept getting asked if his shop was the one that built it. “The question was asked so many times,” Timothy adds, “I had to make it mine and different.” Timothy decided to go wild with his dream truck and stripped it down to metal to recreate it. He added Toyota Prius taillights to keep it Toyota but also tried something that had never been done before: He chose the brightest and most subtle red paint he could with a touch of flipping pearl to stand out and separate it from the last look.
The next stop was the upholstery shop, where the seats were wrapped by Dread at Interior By Dreadz, and the rest of the cabin was created by Timothy at his shop. The dashboard was smoothed and painted by Timothy and final touches were added to change it up. The entire Accuair setup was rewired and the plumbing was updated to work faster and more efficiently. A set of Raceline wheels was mounted to finish off the Tacoma makeover to put it back on the road. 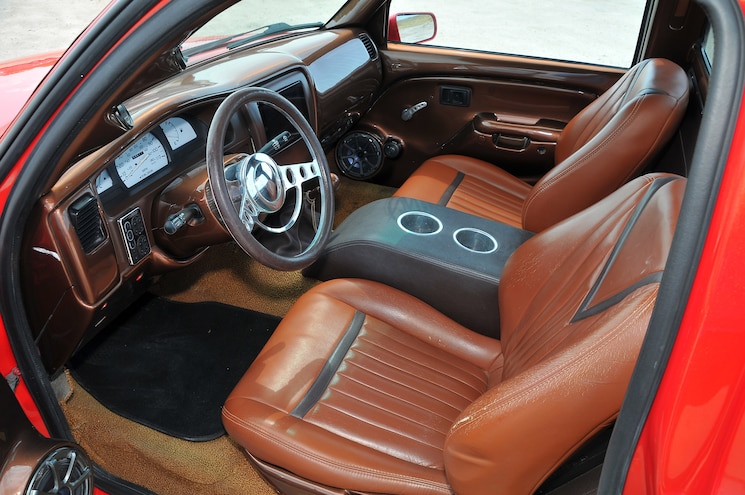 View Photo Gallery | 12 Photos
Photo 6/12   |   2002 Toyota Tacoma 4ChunTaco Interior
Timothy wishes to thank his fiancée, Vanessa, for her love and understanding throughout the process and those late nights at the shop. At first, it was a matter of her putting up with the mini-truck life, but since then, she acquired her first mini and will be building it very soon. Unfortunately, right after the shoot, Timothy’s Tacoma was rear-ended and the bed was damaged pretty significantly. Timothy is currently working on building it back up and debuting it shortly with a new look, because 4ChunTaco will never crumble and will always be there at the end.