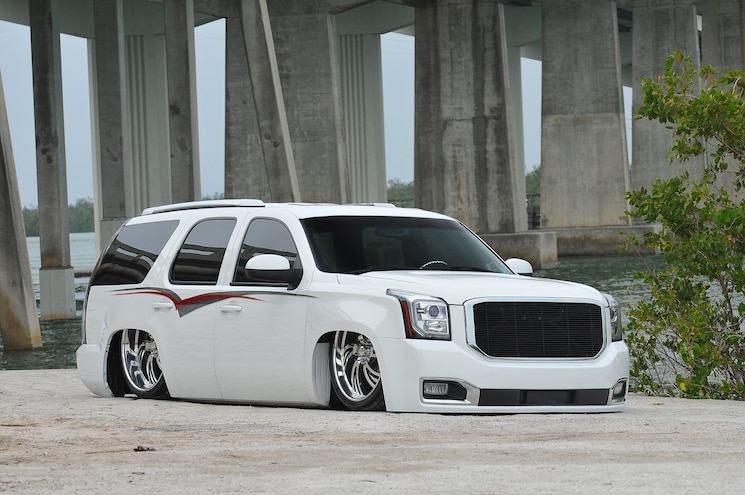 When trucks are in your blood, there is no downtime in the customizing world. For Bobby Mast of North Port, Florida, customizing trucks is second nature. As a contractor by trade who builds and customizes homes, Bobby spends the majority of his time being creative. In 2010, he purchased a Chevy C10, which he was anxious to elevate to show quality. After contacting multiple shops and dealing with promises that were never fulfilled, Bobby started to worry his Chevy would never be complete. 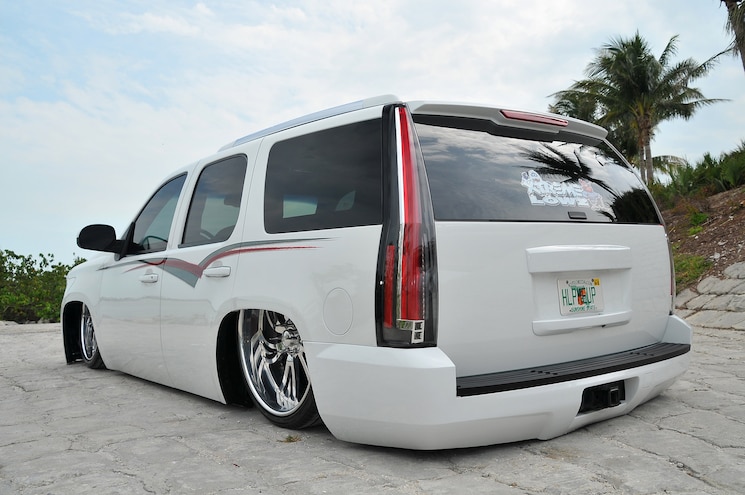 View Photo Gallery | 15 Photos
Photo 2/15   |   2007 GMC Yukon In The Meantime Rear
As the C10 missed show after show while it was at shops and between shops started to anger Bobby so much that he began to look for something to purchase to keep his mind off the project. “It had been seven years and no real progress,” Bobby tells Truckin. “It was time to get something to play with in the meantime.” Of course, Bobby couldn’t start small, so he began searching social media sites for trucks for sale. He found an ’07 GMC Yukon located in Memphis, Tennessee. The owner was willing to sell it, but Bobby wanted to take a look first. The two arranged to meet at Lone Star Throwdown in Texas, where Bobby ultimately purchased the body-dropped Yukon. 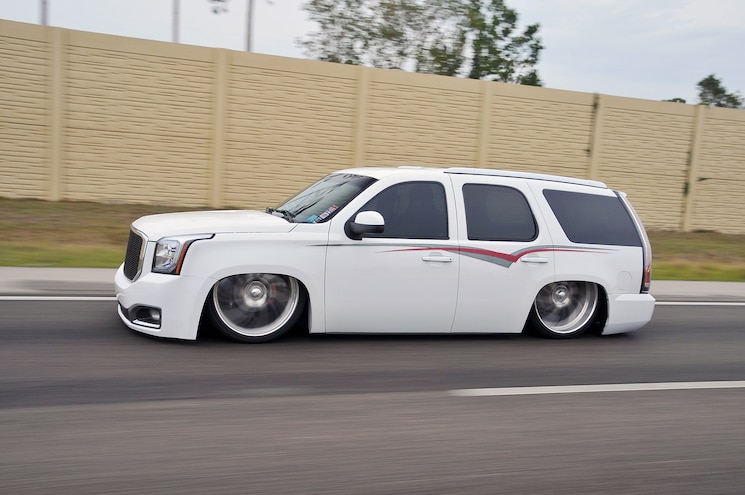 View Photo Gallery | 15 Photos
Photo 3/15   |   2007 GMC Yukon In The Meantime Drive
Once he brought the truck home, he knew he wanted to go a different direction than the C10, based on the time it took to get things done. Although the GMC was painted solid white, it was in rough shape for an ’07. The interior was left stock and showed visible wear and tear from years of use, so Bobby decided the first thing to do was start with comfort. With the help of Biggie Bear at Audio America, Bobby started working on the hydro-dipped dashboard and audio install. Once that was complete, the seats were removed by Jesse and Aaron of Innerworx in Sarasota, and the front buckets were modified and bolstered for comfort. The rear bench seat was cut and narrowed to fit between the tubs. Perforated leather was used to wrap the seats and a double-diamond insert was added front and back. Red safety belts were used to break up the solid black color of the cabin. 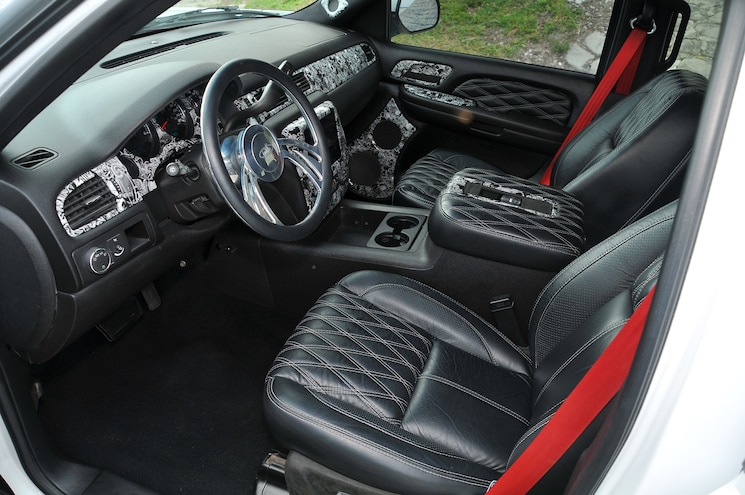 View Photo Gallery | 15 Photos
Photo 4/15   |   2007 GMC Yukon In The Meantime Interior
Unlike his C10, everything seemed to be falling into place without any snags. He brought the truck to a show in North Carolina and saw someone selling a ’17 front clip. He purchased the entire front end and brought it back home to SaltWorks Metal Fab, which replaced the entire front end, headlights, hood, and fenders—and even modified the doors to match. Now prepped for paint, the Yukon was brought to Tony at Forbidden Customs, where it was stripped down to metal and blasted with PPG Frost White and had graphics laid down on the sides. Once Bobby had it out of the paint and body shop, he added a T-Rex front grille to the new front clip. 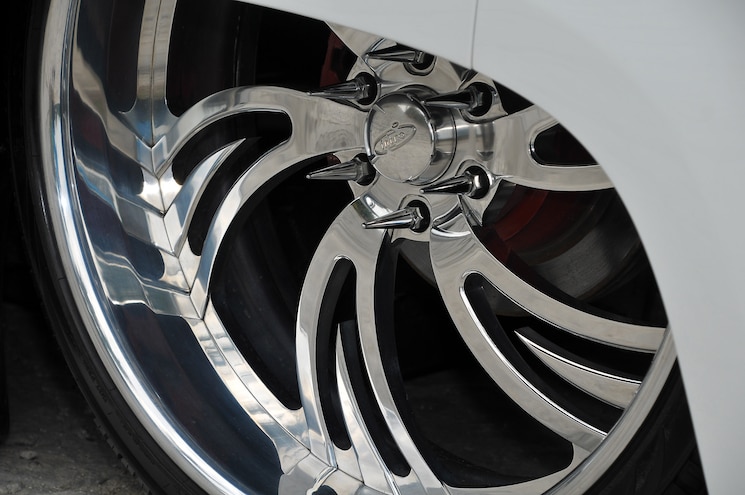 View Photo Gallery | 15 Photos
Photo 5/15   |   2007 GMC Yukon In The Meantime Wheel
During the process of the build, the motor in the Yukon lost oil and started knocking. By the time Bobby tried to fix it, the damage had been done and the cam had seized. He purchased a GTO wrecked as a donor car and removed the 6.0L motor and ported and polished the heads. An engine cover was removed from a ’10 Camaro, modified to fit, and painted Galaxy Silver. Florida Power and Speed tuned the motor to get it working flawlessly. 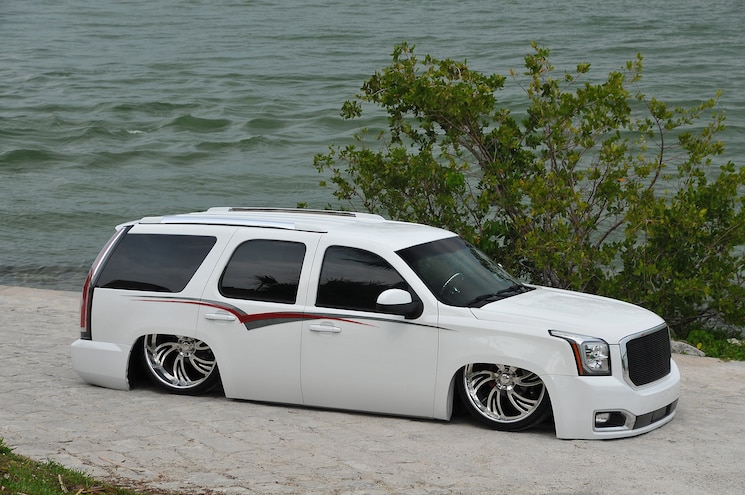 View Photo Gallery | 15 Photos
Photo 6/15   |   2007 GMC Yukon In The Meantime
Bobby unveiled the makeover of the Yukon exactly one year to the date at Lone Star Throwdown 2018 in Texas. While his C10 is currently still in a shop in pieces, he was successful in getting the Yukon completed and up to his standards in only 12 months. Bobby wishes to thank his beautiful girlfriend, Nikki, as well as his Xtreme Lowz family for always being there for him. With the ultimate goal of debuting his Chevy in a year, Bobby certainly showed it doesn’t take eight years and tons of broken promises to complete a custom truck. His Yukon, In the Meantime, showed it could be done.