When Everything You Touch Turns to Gold 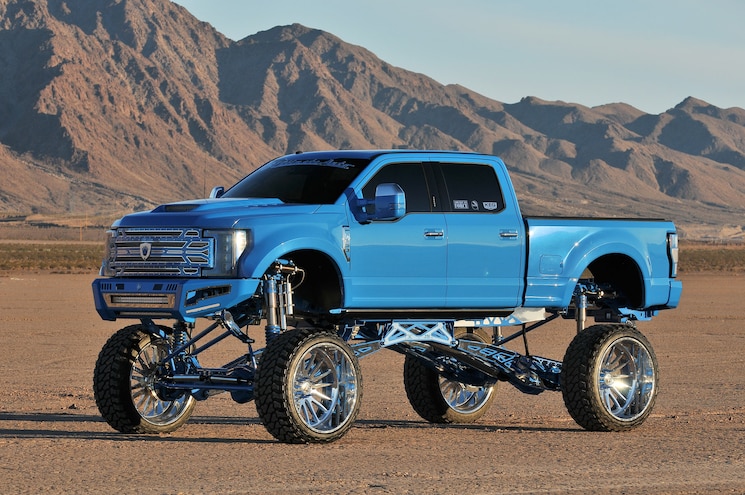 In Greek mythology, King Midas had the ability to turn anything he touched into gold. Tim Dunaway seems to have that same good fortune. A self-proclaimed entrepreneur from The Woodlands, a town right outside of Houston, Tim is much more than that in the truck culture. “My bread and butter was in the wireless business,” Tim tells Truckin, “and today I still have that business.” Twenty years ago, he opened a cell phone repair center, and through the right moves, or “the golden touch,” if you will, he reached levels far above mere success. Ten years ago, he was able to venture off into the truck world as well as other startup businesses. 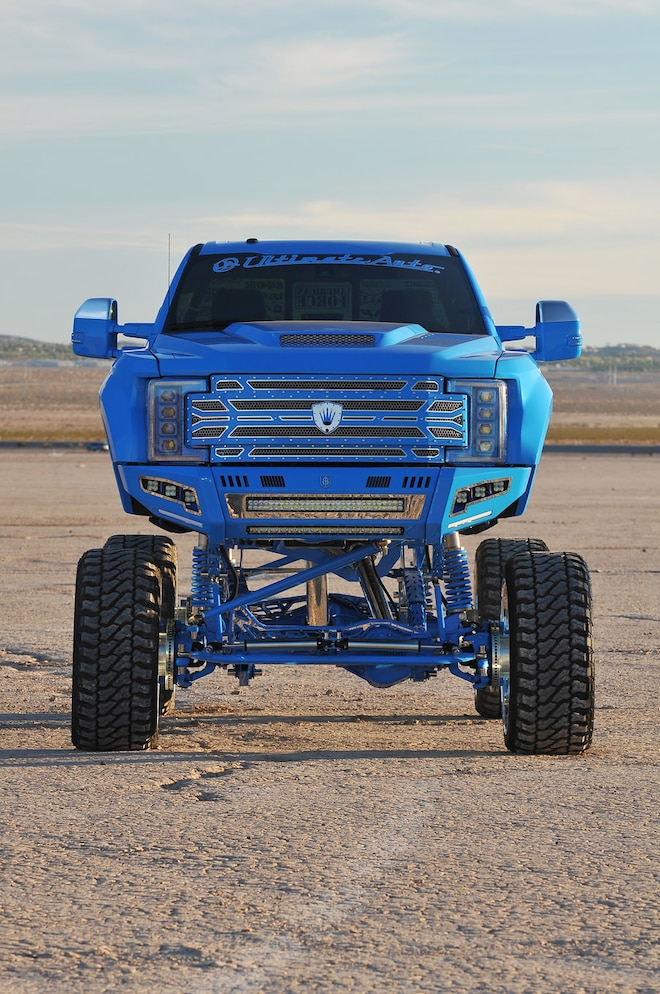 View Photo Gallery | 25 Photos
Photo 2/25   |   2018 Ford F 250 The Midas Touch Front View
As part owner of successful companies like FLO Airride, clothing company #WeOutHere, and many other ventures, Tim has his Midas touch in almost everything that has been successful in the culture. As a young boy, he was intrigued by cars and trucks. But once he was able to afford the costly luxuries he dreamed of, he wasn’t shy. “I’ve brought 13 high-end builds to SEMA over the last three years,” Tim adds. “I guess I make the right decisions on the builds.” Tim has remained low key and never looked for the recognition in any of his builds, but he owns heavy hitters like Arctic Frog (the white Jeep with the tracks as wheels), Rapture (a Ford truck that graced the cover of Truckin), and FLO Squared (the ’77 K5 Blazer featured on the January 2018 cover). 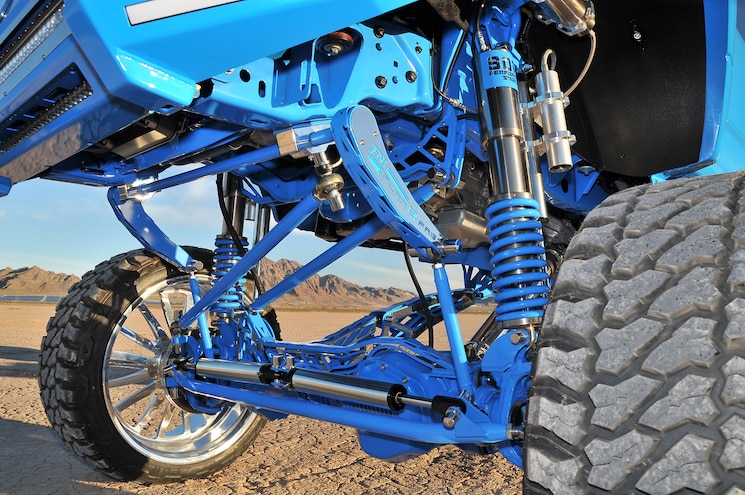 View Photo Gallery | 25 Photos
Photo 3/25   |   2018 Ford F 250 The Midas Touch Front Suspension
Tim wanted to break the mold at SEMA 2018 and started looking for the latest and greatest project to date. With his wide-bodied and ’bagged ’17 Audi R8 and Eleanor Mustang as the side dishes he was bringing to Las Vegas for 2018, he walked into Planet Ford in Spring, Texas, and picked out a brand-new ’18 Ford F-250 Platinum crew cab. As there were only two and a half months until the deadline, Tim knew the work had to be quick. He contacted Rob Pique of Plan B Fabrication in Orlando, Florida, and made arrangements for the truck to be transported. Once it arrived in Florida and Rob became aware of the time crunch, he worked quickly adding the SORD hydraulic adjustable shocks and sheetmetal radius arm setup. The travel range on the suspension was 18 to 24 inches, and all the steering was converted to heims and high-steer crossover steering. A dual steering stabilizer was added to the front axle, along with a 1.75-inch custom-built front sway bar kit. A full frame crossmember was installed in the front and rear. The complete suspension uses double overlay with mirrored stainless steel for finishing touches. 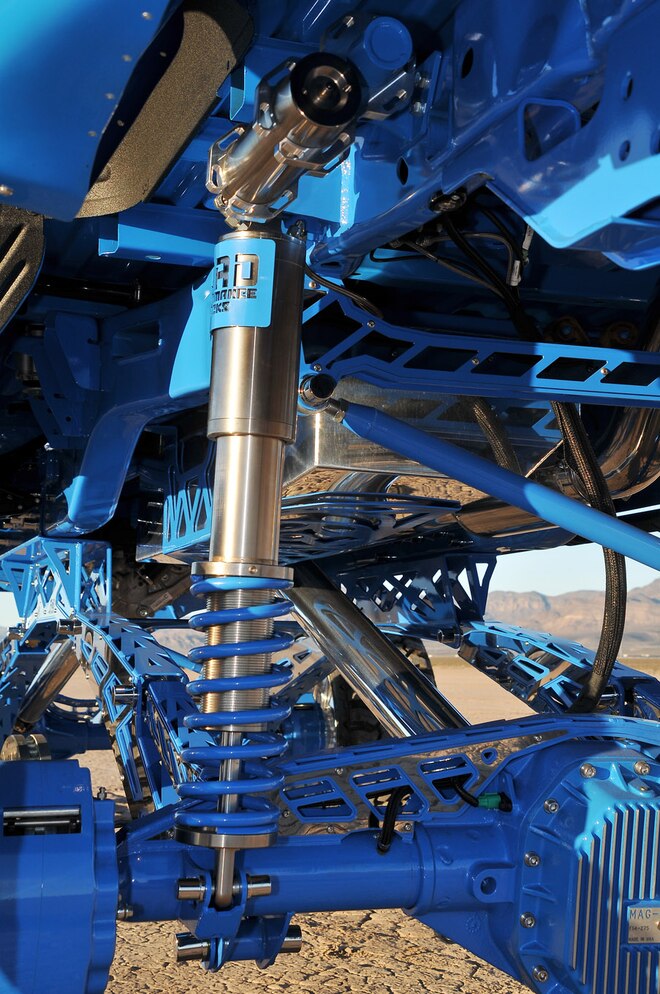 View Photo Gallery | 25 Photos
Photo 4/25   |   2018 Ford F 250 The Midas Touch Sord Shocks
Rob enlisted Joe Labon, owner of Ultimate Auto in Orlando, for the bodywork and paint Tim chose while on the short drive from the suspension shop. “It started out that I was using Ultimate Auto because it was only 20 minutes away from Plan B,” Tim says, “but Joe ended up being the most important and doing the most work.” His first thought was he wanted to do more bodywork to the Ford than his past trucks. He asked for 6-inch McNeil fenders to be added to the front for a stouter appeal. For paint, The Ford Grabber Blue was Tim’s first suggestion. He didn't entertain the thought of any other color being used for his new Ford, so the paint masters at Ultimate Auto tackled the paint first, adding some blue pearl for a better shine.
Ultimate Auto next added a full distressed Alea Leather kit with breathing holes in each seat. In the center console, the team added a Lock’er Down vault to keep all Tim’s personal items safe. Tim requested the highest-end audio system be inserted in the build, and Joe was more than happy to oblige. An integrated Apple TV unit was installed as well as touch-screen tablets in the back for his kids to play on when they are riding with their dad. Morel Elate Titanium components were added throughout for flawless sound and subwoofers were mounted underneath the rear seats, hidden away. As the truck bounced back and forth between Joe at Ultimate Auto and Rob at Plan B, Tim encouraged them to use their superior fabricating skills in every aspect of the build. 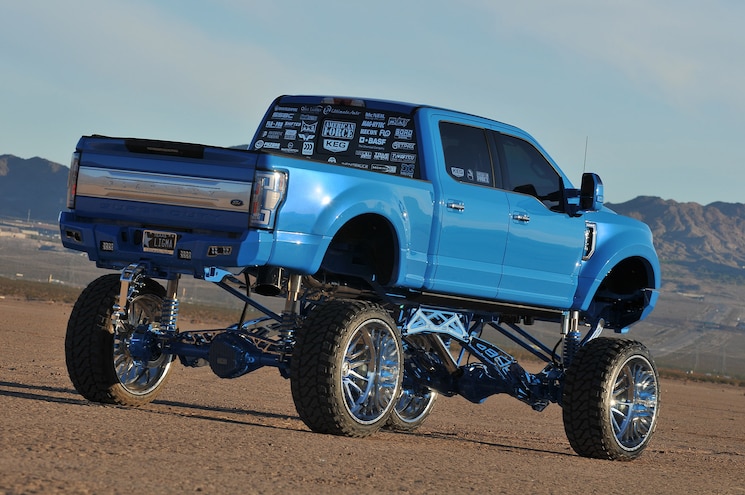 View Photo Gallery | 25 Photos
Photo 5/25   |   2018 Ford F 250 The Midas Touch Rear 3q
All in all, Tim admits his Ford was the most expensive build he’s done to date, but one look at his perfectly designed Platinum and you can understand how he got his golden touch. Tim loves teaming up with great people and starting businesses together to watch them grow. Although Plan B and Ultimate Auto had free rein to use their unique blend of creativity, they came together to build perfection. Tim wishes to extend his gratitude for the hard work and quick turnaround time of both shops but mostly a huge thanks goes to his wife, Michelle, and their two boys, Andrew and Ethan, for their patience and understanding of the expensive hobby that brings a smile to Tim’s face every time he talks about his vehicles.