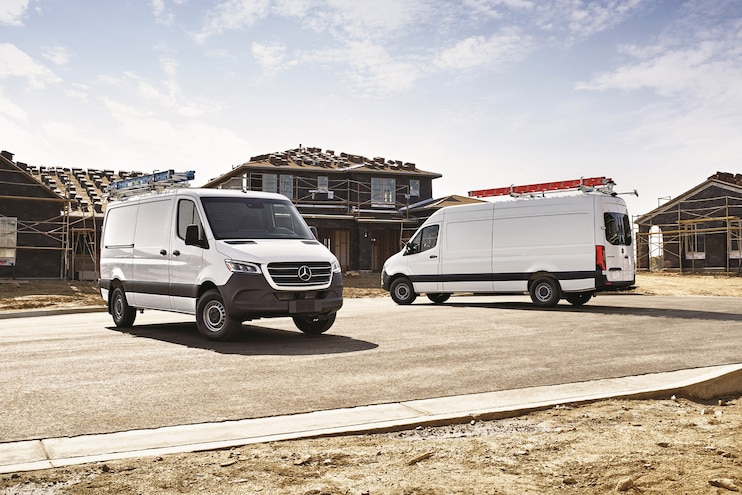 The ’19 Mercedes-Benz Sprinter is a business-like and square-edged work van, so it makes perfect sense that it’s been given a seriously tough job to accomplish. Not only does the reinvigorated Sprinter have to prove itself to a work-focused customer base, one where every saved dollar counts, it must justify the construction of a brand-new, $500 million factory in Charleston, South Carolina, built to satisfy Sprinter demand in the U.S. and Canada.

Speaking at the factory’s ribbon-cutting ceremony, Volker Mornhinweg, the global head of Mercedes-Benz vans, described the production delays and complications with the previous U.S. versions of the Sprinter. “It could take six months to get a Sprinter order into the hands of a customer…this was far too long,” said Mornhinweg, matter-of-factly.
The delays can be blamed on chickens or, to put it more precisely, on the so-called “chicken tax.” This decades-old, 25-percent tariff is levied on light trucks imported into the U.S. True to its bizarre name, this rule has its foundation based in a long-ago global dispute over chicken imports and exports. While the poultry side of this argument was laid to rest years ago, the tariff on foreign trucks has remained in place. 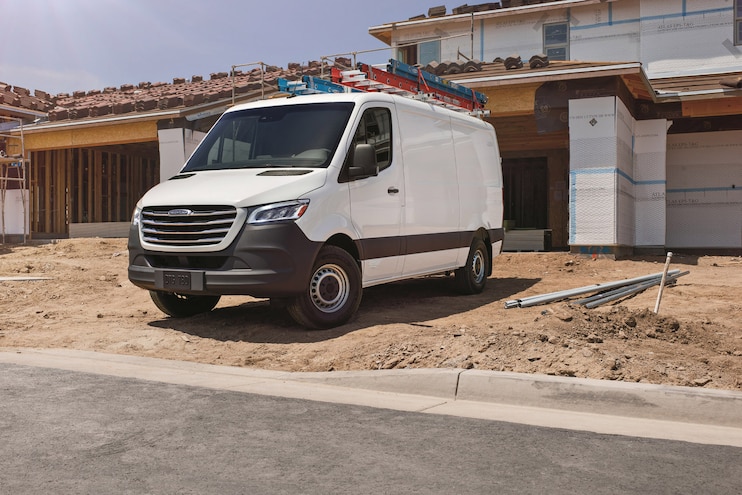 View Photo Gallery | 71 Photos
Photo 2/71   |   2019 Mercedes Benz Sprinter First Drive
Starting in 2006, in a complicated maneuver to avoid the chicken tax, Mercedes-Benz began building complete Sprinter vans in Europe, then disassembling the trucks prior to shipping them stateside. Once at a facility in South Carolina—a much smaller precursor to Mercedes’ new factory—the vans were reassembled, then sold in a wide range of passenger, cargo, and RV-friendly iterations. This avoided the tariff, but it created logistical headaches for Mercedes and its customers.
According to Mercedes, the more than 1-million-square-foot expansion of its South Carolina operations—changing it from a kit assembly point into a true factory—has created approximately 900 jobs. By 2020, overall head count is expected to grow to 1,300.

Our first drive of the ’19 Sprinter happened earlier this year, during a press event held in the Netherlands. Despite its large size—the longest cargo variants stretch to 290 inches in total length—the Sprinter impressed us with its overall agility, relatively narrow body (a major plus point on narrower European roads), and surprisingly comfortable ride. While the electro-mechanical steering felt numb, the truck’s tight turning radius and available surround-view cameras to make parking easier helped offset this handling demerit.
Here in the U.S., there will be a choice of two engines. The first, and the one we drove in South Carolina, is a 3.0L turbodiesel V-6 that produces 190 hp and 324 lb-ft of torque. Rather than the previous Sprinter’s antiquated five-speed automatic, the diesel variant comes with a new seven-speed automatic. The extra gears allow for quicker acceleration and better economy. Mercedes also noted that this new gearbox equates to a 12-percent drop in engine rpm at 65 mph—from 2,575 rpm in the outgoing Sprinter to 2,260 rpm in the new one.
The Sprinter will also be available with a 2.0L turbocharged I-4 that delivers 188 hp and 258 lb-ft. The gas engine comes solely with a nine-speed automatic. Unlike the diesel model, which offers optional all-wheel drive in all versions but the cab-chassis model, the gas-fed Sprinter is available only in rear-wheel-drive format. 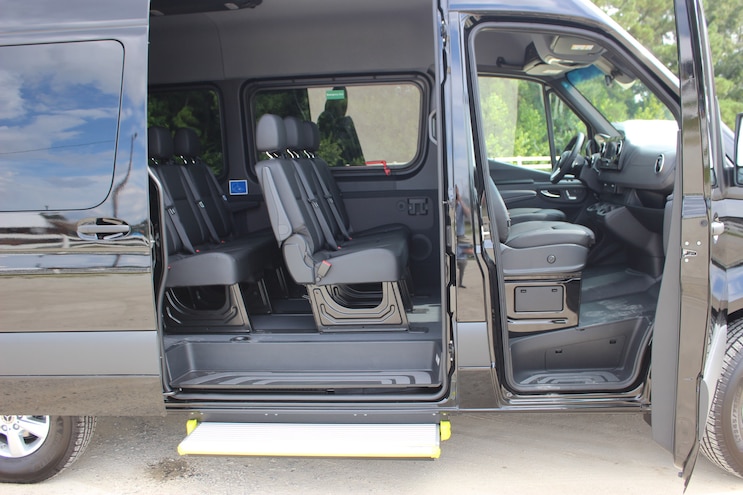 View Photo Gallery | 71 Photos
Photo 3/71   |   2019 Mercedes Benz Sprinter First Drive Interior
If towing and heavy hauling is a primary concern, the diesel will be the better option. The available GVWRs in the Sprinter diesel lineup range from 9,050 to 12,125 pounds. When properly equipped, the diesel model has a maximum towing capacity of 7,500 pounds and max payload of 6,636 pounds (in cargo van models). This compares to a lower GVWR range of 8,550 to 9,480 with the gas model, along with its lower max towing capacity of 5,000 pounds.
Like the outgoing Sprinter, the ’19 model year offers a choice of standard or tall roof, two wheelbase lengths (144 or 170 inches), along with an extended rear variant (available on cargo models, this boosts storage capacity to 533 cubic feet).
Pricing for the Sprinter starts at $33,790 for a gas-powered cargo model, upward to $56,790 for a diesel-powered passenger van fitted with all-wheel drive. For comparison, an ’18 Ford Transit cargo van carries a starting price of roughly $32,000, while the entry-level Ram Promaster starts at just under $30,000 (all prices are excluding destination fees). 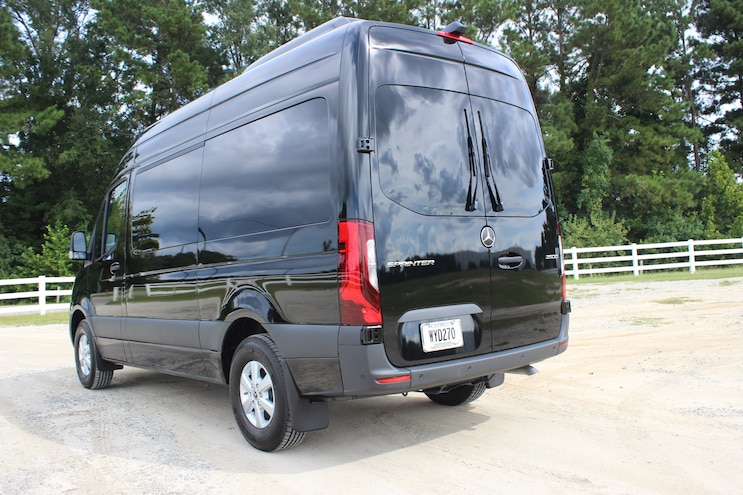 There are hundreds of ways you can configure a Sprinter, but luckily for us, a quick grab amongst a jumble of keys netted a two-hour test drive in one of the poshest trim levels. For our second crack at the new Sprinter, not to mention our first drive in the “Made in U.S.A.” model, we piloted a Sprinter 2500 passenger van, equipped with the diesel engine, short wheelbase, and high roof. Our tester had seating for 12, including the driver, but Mercedes-Benz is also offering a 15-passenger variant that will be sold only in the U.S.
Believe it or not, the punch of the turbodiesel is entertaining at city speeds, where almost every other driver assumed this XXL-sized van would be a slug once the traffic light went green. Acceleration to highway speeds was more than adequate for a vehicle in this class, and the engine was quiet at a steady 70-mph cruise. Top speed for all Sprinter vans is set at 90 mph, in case you’re feeling brave.
There was some wind noise and vibration from the side mirrors while cruising on the highway, but by and large, the well-behaved dynamics that first impressed us in Europe also held true on American roads. Better still, the spongy brake-pedal feel that was an issue during our first drive didn’t reappear during our second Sprinter encounter. On suburban roads, the Sprinter felt as easy to drive as a typical SUV—albeit one that’s high enough to trim the limbs from low-hanging trees. Maneuvering in tight parking lots or making quick merges onto the highway were all easily dispatched during our drive.
Is the Sprinter perfect? Not quite. And please, don’t get us started about the point in one Mercedes presentation where the van was referred to as being “holistic.”
There are three infotainment screens available, and our test van came with the best and largest of them all. While the 10.25-inch touchscreen has clear graphics, the pinch-to-zoom commands for the navigation system are impossible to accomplish without taking your eyes off the road. On a couple of occasions, we inadvertently start sliding into another lane while trying to zoom in and out.
The “Hey Mercedes” voice command system presented an even stranger quirk. Anytime you say Mercedes out loud, it suddenly chimes in to help. This leads to Sprinter conversations that must avoid using the M-word, which turns every drive into the automotive equivalent of saying Voldemort while enrolled at Hogwarts. The USB outlets for the front passengers are also perched far too high, almost at the base of the windshield. 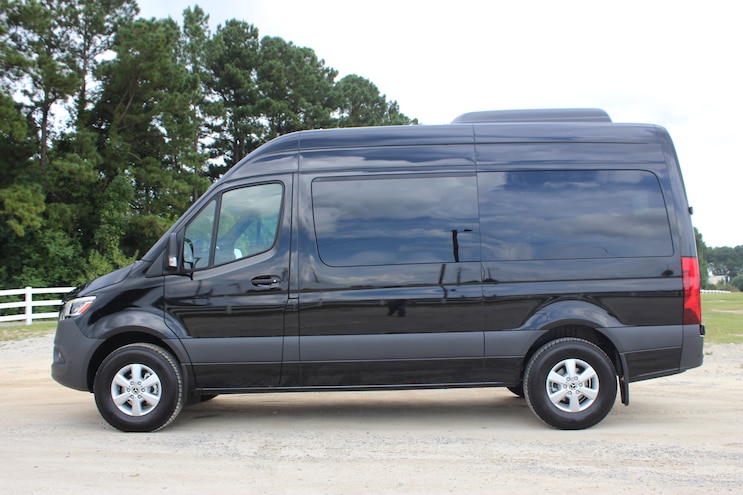 We won’t devote too many words toward describing the visual appeal of a van bound for a life of hard work (or as an elegant airport shuttle). In the world of vans, however, the slimmer headlights and LED lighting, both front and rear, give the ’19 Sprinter a fresh new face. Some of the superfluous ridges along the front, side, and rear of the previous model have been smoothed over in the new Sprinter.
Would anyone ever buy this Mercedes because of its good looks? No, of course not. But no one will cross the Sprinter off their van-shopping list because it’s a homely beast, either.
Inside, Mercedes has made big improvements in terms of the quality and layout of the dashboard, along with other major controls. The classy-looking circular air vents and 10.25-inch touchscreen are a lot more Mercedes and much less utility van in appearance. The leather seats in our test van were comfortable and supportive, while accessing the three rows of rear seating was simple and didn’t require any gymnastics. The center seats are airline-like in terms of width and comfort—they’re doable, but preferably not for long-haul trips.
Credit to Mercedes for putting plenty of cupholders and USB outlets throughout all three rows, not to mention overheard controls for the auxiliary air-conditioning system, mounted on the roof of our tester. 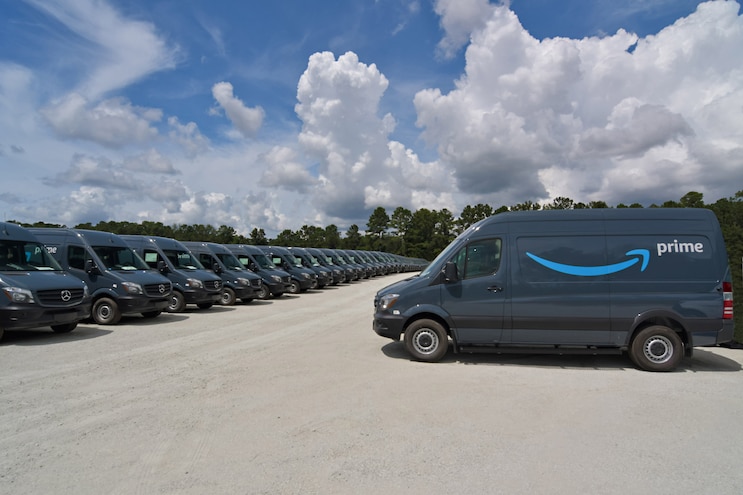 “[The Sprinter] is not only a van, it’s a digital tool,” said Mercedes’ Volker Mornhinweg, regarding the technology lurking beneath the van’s boxy skin. In terms of safety, the new Sprinter offers many of the features you’d find on the German automaker’s mainstream cars and SUVs. This includes blind-spot alerts, rear cross-traffic warning with automatic braking, surround-view cameras with reverse guide lines, intelligent cruise control, lane-keep assist, traffic-sign recognition, and a driver attention-monitoring system.
For fleet buyers, the MercedesPro telematics system allows for the remote monitoring of everything from fuel levels and upcoming maintenance needs to whether a Sprinter’s doors have been left unlocked. A demo using the smartphone app showed the system is simple and straightforward, though Mercedes confirmed the company would also work with large fleet buyers to tailor the system to their specific needs. One of those early customers will be Amazon, with the online giant confirming it has ordered 20,000 Sprinters for its Delivery Service Partner program. The full order will be completed by the end of 2019.
Upcoming variants include gas-powered models of the entry-level 1500 line, along with heavier-duty versions of the 4500-model range. An electric Sprinter is already sold in Europe, but the limited range (less than 100 miles per charge) makes it poorly suited for the U.S.
As it stands, the ’19 Sprinter represents a solid step forward for Mercedes’ largest van. The improved cabin layout, available safety features, and wide model range all help to make the Sprinter a better contender in this no-nonsense market segment. Will this prove enough to justify the huge investment Mercedes-Benz has made in terms of Sprinter production in North America?
The Sprinter is built for work, and this newly American-made van has quite a big role to fill.

- OF
By Nick Kurczewski
7 Articles