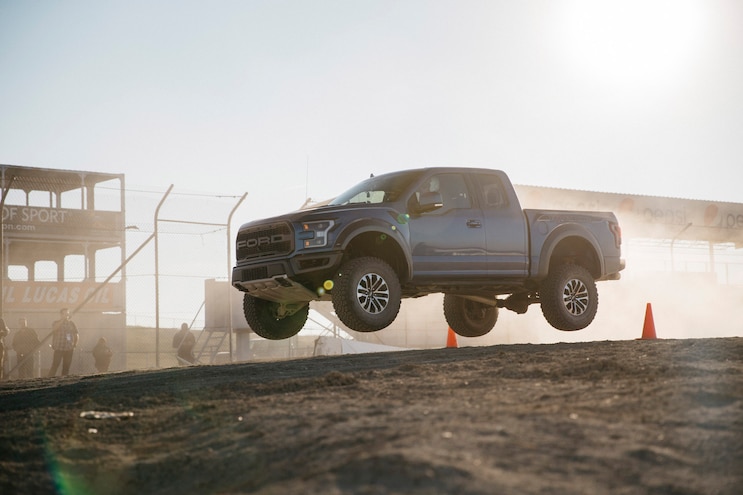 Quick, name five off-road pickups!
Now, if you’re anything like the average truck enthusiast, your mind probably rattled off pickups like the Toyota Tacoma, Ram Power Wagon, Chevrolet Colorado ZR2, maybe the Jeep CJ Scrambler…and the Ford F-150 Raptor.
Since its introduction for ’10 (then a member of the bygone Ford SVT family), the Raptor has been synonymous with high-speed off-road capability, built like a Trophy truck with plenty of wheel travel and a well-damped suspension. But while that original Raptor was built like a hot rod (lots of tire, V-8 power, major-league springs, but not a lot of technology), the second-generation ’17 model box-jumped into the 21st century with sophisticated traction aids and drive mode selectors, a torque-on-demand transfer case, and a turbocharged 3.5L V-6 engine. 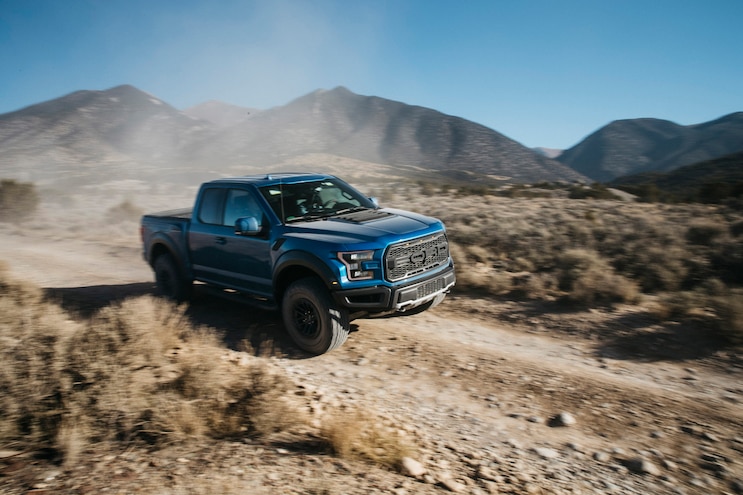 View Photo Gallery | 15 Photos
Photo 2/15   |   First Drive 2019 Ford F 150 Raptor Off Road
But even with all that technology, the suspension remained similar: progressive-rate springs and Fox internal-bypass shock absorbers that offered the same dynamics in all driving situations. The new truck was still a revelation in high-speed off-roading, but it demanded a few compromises, the most obvious of which was copious body roll on highway sweepers. For the record, we never complained.
But rather than leave well enough alone, Ford has seen fit to update the F-150 Raptor for ’19 with a few niceties, the most significant of which are Fox’s all-new “Live Valve technology” 3.0 internal-bypass shock absorbers with remote reservoirs. Live Valve technology is the key phrase in that sentence, as it allows the shock absorbers to react to changing road conditions and driving styles almost instantaneously. For example, ride-height sensors at all four wheels are able to detect when the Raptor has left the ground (as it is wont to do, quite frankly—the temptation of all that turbocharged power is hard to resist). If the sensors detect the wheels at full extension, Live Valve technology firms up the Fox shock absorbers to prepare the truck for reentry. 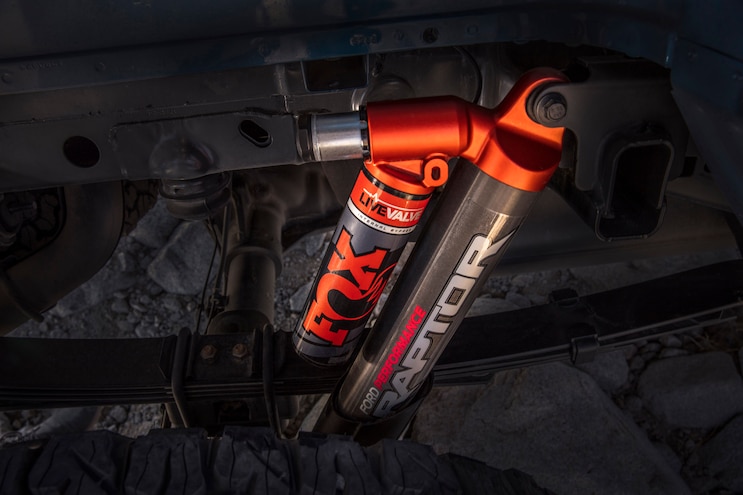 View Photo Gallery | 15 Photos
Photo 3/15   |   First Drive 2019 Ford F 150 Raptor Fox
If vehicle sensors detect high-frequency impacts, such as what one might encounter in high-speed desert running, the shock absorbers soften up, allowing the suspension to absorb as much of the rough stuff as possible and leaving the truck itself unperturbed. When wheel travel begins to approach its limits, Live Valve technology stiffens the corresponding shock absorber, preventing jounce impacts and the like. The suspension system works in conjunction with the Raptor’s integrated Terrain Management System, operating nearly invisibly without any driver intervention.
Other updates for ’19 include an F-150–first implementation of Ford’s all-new Trail Control speed-management system, which was introduced on the Ranger. This system works similarly to Toyota’s Crawl Control, operating the brakes and throttle in low-speed rockcrawling, but unlike Crawl Control, Trail Control is capable of operating at speeds of up to 20 mph. The ’19 Raptor also gets optional beadlock-capable wheels and available Recaro sport seats. Unchanged for the new model year are the truck’s 450hp, 510–lb-ft EcoBoost 3.5L V-6, 10-speed automatic transmission, and overall cosmetics (a new graphics package and over-the-top tailgate applique are available). 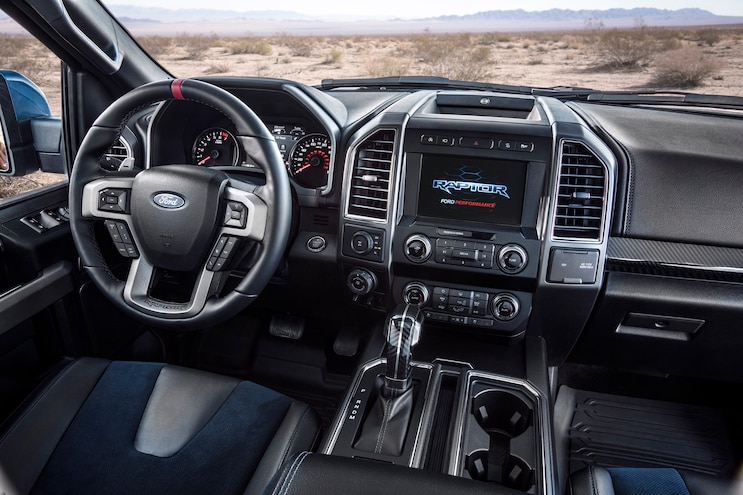 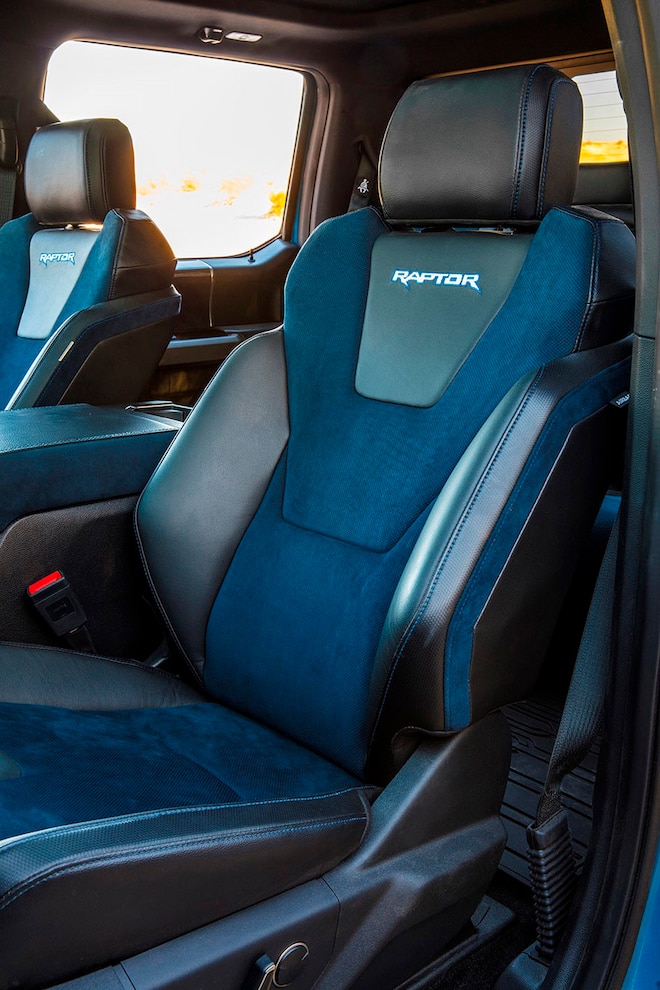 View Photo Gallery | 15 Photos
Photo 5/15   |   First Drive 2019 Ford F 150 Raptor Interior Seat
To test the new truck out, Ford brought us to Utah Motorsports Campus just east of Salt Lake City and enrolled us in the Ford Performance Raptor Assault driving school. The cost of enrollment at Raptor Assault is included in the price of every new F-150 Raptor sold if the owner chooses to participate, and since its launch in January 2017, Raptor Assault has ballooned from 15 sessions per year to more than 100. Raptor Assault instructors would guide us along some of central Utah’s most interesting off-road trails, dictating how we should use the trucks’ different drive modes via radio so we could feel each system working to keep us moving forward. At the end of the day, we’d get three chances to hit a box jump just right, allowing us to take the off-roader airborne.
So how did the ’19 Ford F-150 Raptor do when the going got rough? How do you think?
Predictably, the Blue Oval hot rod is still the off-road pickup to beat when it comes to high-speed running over nasty surfaces. With all that power under the driver’s right foot and 13 inches of front and 13.9 inches of rear suspension travel, it’s easy to get the Raptor moving quickly over varied terrain. Well and truly, the Fox Live Valve shocks do improve the Raptor’s manners ever so slightly while off-roading—we could definitely feel a small improvement when traversing Jacob City Trail at about 45 mph. 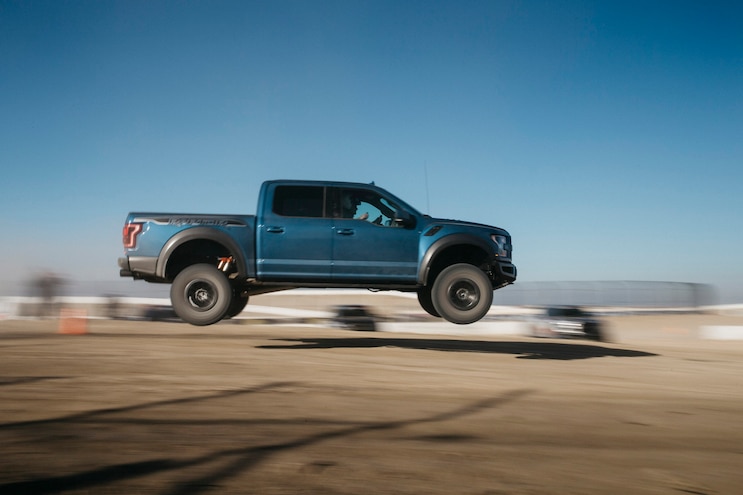 View Photo Gallery | 15 Photos
Photo 6/15   |   First Drive 2019 Ford F 150 Raptor Jump
Furthermore, Live Valve works most obviously when going around corners, stiffening the outside shocks to reduce body roll compared to the ’17 and ’18 Raptor. It also altered the Raptor’s airborne characteristics perceptibly, as 50-mph landings at Utah Motorsports Campus’ dirt racing track were incredibly smooth. We’ve jumped Raptors before (don’t tell the boss), but none had this level of control when reentering the atmosphere.
Intended to help the Raptor tiptoe over scree fields, Trail Control actually seemed to be more of a hindrance. Set at 3 mph in 4-Low, large rocks would stop the Raptor in its tracks. Trail Control would attempt to compensate by applying the throttle, but as soon as turbo boost would build, the Raptor would unexpectedly vault over the rock and before you knew it, you’d be going 7 or 8 mph. While that doesn’t sound terribly dramatic, when navigating a tight route in a wide truck, it was decidedly unnerving. We preferred to two-foot the throttle and brake pedals instead, and we suspect most off-roaders who enjoy perfecting their technique to feel the same. Trail Control is a boon on wider, smoother dirt roads, such as what one might encounter between a two-lane highway and a U.S. Forest Service campsite. Set at 20 mph, it made it easy to keep the Raptor under the speed limit, eliminating the temptation to stab the throttle and break the rear wheels loose around corners.
The styling of the Raptor’s beadlock-capable wheels was fantastic, although many jurisdictions in the U.S. don’t allow beadlocks for road use. We didn’t air the tires down enough for the beadlocks to be helpful in any significant way, but folks who do will be glad those wheels are there. And the new-for-’19 available Recaro seats were nearly perfect—supportive and stylish, but all-day comfortable. Of course, we could say the same thing about the standard seats, so unless you love Recaro’s styling or demand its name recognition, that’s probably an option you could skip.
Overall, if you just bought an ’18 Raptor and are kicking yourself for not waiting, don’t fret: Your truck is 95 percent as capable and amazing in all conditions as the ’19 pickup. But nevertheless, the slight tweaks to the new F-150 Raptor keep it at the top of the class when it comes to boisterous, high-speed off-roading. 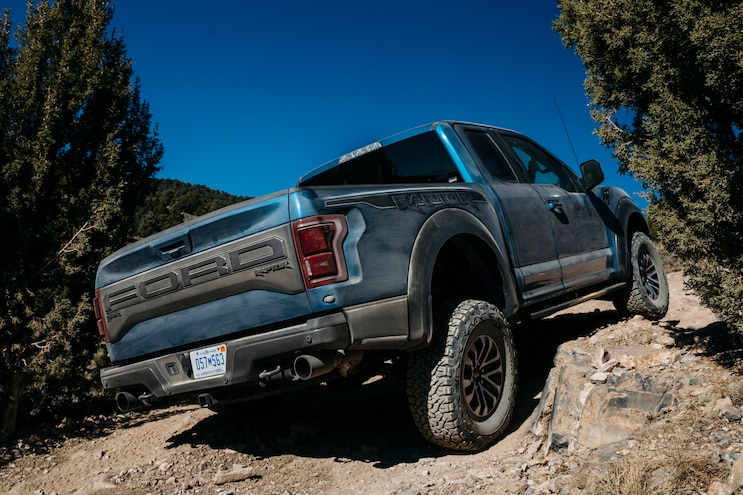