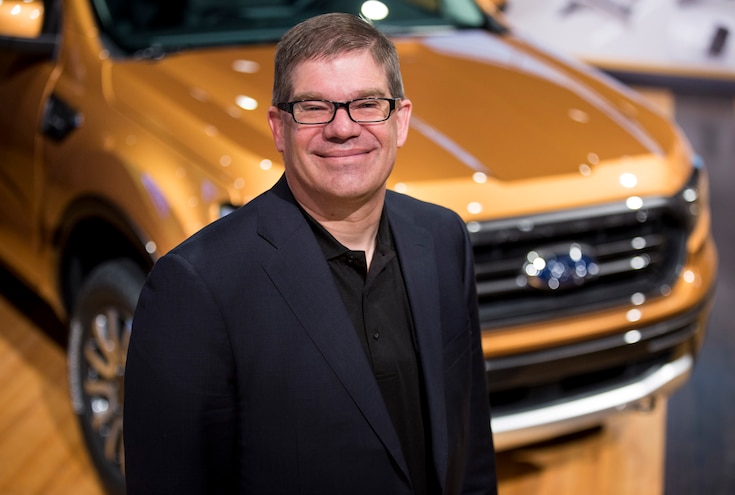 Rick Bolt, born and raised in Grand Rapids, Michigan, grew up kayaking, surfing, and sailing. His dad was a salesman, then sales manager, then general manager for a car dealership, so he also grew up in and around cars. At 14, he was working for his uncle as a marine mechanic and restoring his first car, a Chevrolet Chevette, which he says he “bought for next to nothing and rebuilt as a daily driver.” His family had a cottage near the Silver Lake sand dunes, so he learned to drive in a dune buggy on the sand and, in the winter, in a snowy parking lot going sideways in that rear-drive Chevette.
He attended Calvin College in Grand Rapids for three years and transferred to the University of Michigan, where he earned undergrad and graduate mechanical engineering degrees. Then in 1992, he joined Ford as a college graduate in training, a two-year program that rotated young engineers through a variety of assignments. His core Advanced Concepts group was doing platform and technology development, including—even back then—development of aluminum body structures that “ultimately became the ’15 F-Series,” he says. He also took a 10-month detour to Ford Motorsports doing engineering support for Roush Racing, which he loved. Bolt has raced sports cars “off and on” and is currently restoring a vintage sports racer, which he “bought in pieces” and is slowly putting back together. 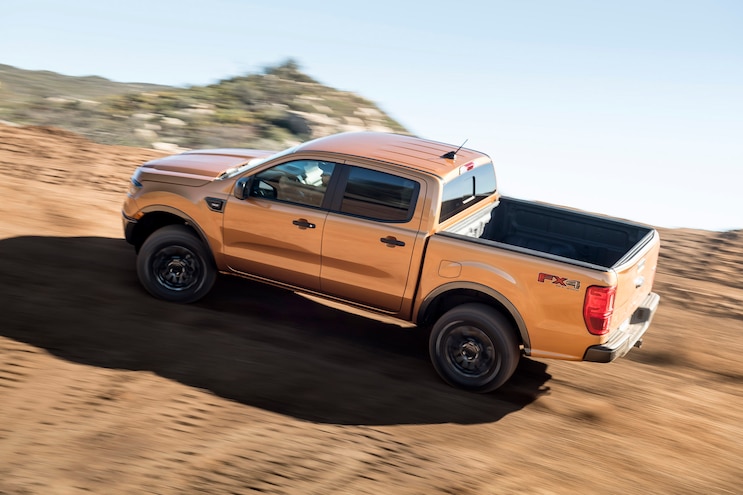 View Photo Gallery | 8 Photos
Photo 2/8   |   Interview Rick Bolt 2019 Ford Ranger
Truck Trend: What other programs have you led prior to this one?
Rick Bolt: I was assistant chief based in Europe on the ’12 Focus, then program manager on the Escape that launched in 2013, then program manager for the ’17 Super Duty, then this ’19 Ranger.
TT: What determines how you approach a new program?
RB: With trucks, it’s a bit more educated consumer. They know more what they’re looking for—something they trust and believe will be durable and reliable, and they want it to be authentic. It looks like what it is, and it does the job it’s supposed to do.
TT: Have you been involved with the designers in the studio?
RB: We have a great group of designers, so I can’t say that I had a huge hand in it, but I was in the studio two, three, sometimes four times a week going through the sign-off phases refining the design, working with them on how to make it look “Built Ford Tough.” We put together a paper on Built Ford Tough—what it is and isn’t—and used that with the engineers and the design team to convey that message.
TT: What were the top priorities for this program?
RB: Durability, quality, and reliability are ones that cover everything. Two that sit below that are off-road capable and on-road refined. Then the next tier is affordability, fuel efficiency, price, and content, making it a vehicle that is a good choice to purchase. 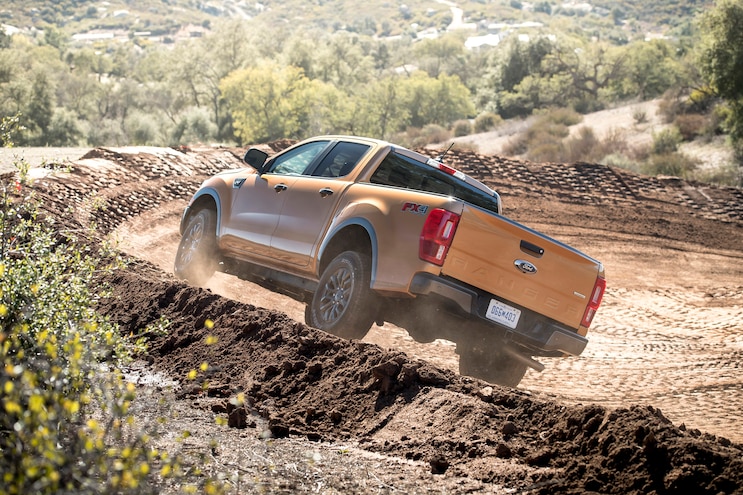 View Photo Gallery | 8 Photos
Photo 3/8   |   Interview Rick Bolt 2019 Ford Ranger Rear
TT: Did you have specific targets for fuel economy versus performance?
RB: Yes, and refined them over time with corporate and competitive targets. We started with a very clear, consistent vision to be best-in-class in fuel economy among all gas powertrains.
TT: Was fuel economy versus performance the toughest challenge?
RB: Those were the big ones, and the one that dovetails into both was weight. If you want good payload, good fuel economy, and good towing, holding to a weight target and finding the right places to shave weight is the other tough challenge. That becomes the all-encompassing priority because it affects everything.
TT: Was going to an all-aluminum body like the fullsize an option?
RB: The hood, front fenders, and tailgate are aluminum, the best overall values for what we needed. And a forged-aluminum front knuckle. So we did some aluminum, but not as far as F-150.
TT: The ’19 Ranger offers just one powertrain.
RB: Yes, but it’s best-in-class versus competitors’ four-cylinder gas powertrains, and best-in-class for torque versus V-6 competitors. In our view, it is the best solution. We’ve got towing, payload, and torque comparable to V-6s, with efficiency comparable to I-4s with the 10-speed transmission, stop/start and EcoBoost. There was not a lot of discussion of needing a second one. The highest-volume engine in the F-150 right now is the 2.7L EcoBoost V-6, and I believe people will find out that the Ranger does pretty well with its single powertrain. 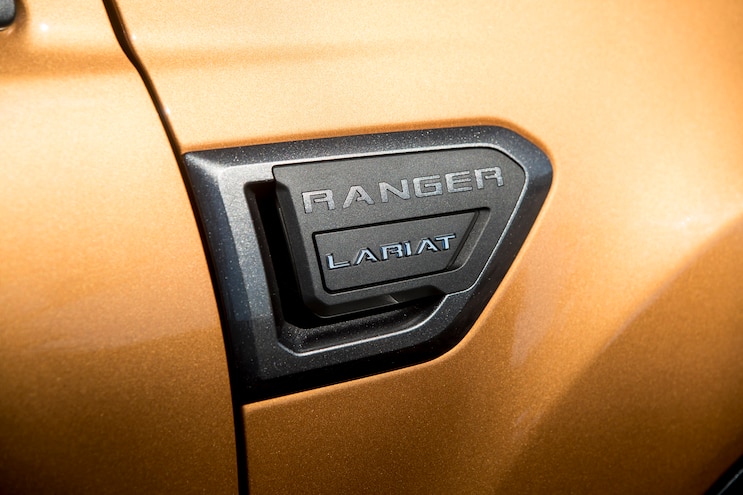 View Photo Gallery | 8 Photos
Photo 4/8   |   Interview Rick Bolt 2019 Ford Ranger Lariat
TT: How does the ’19 Ranger differ from the global version?
RB: The architecture is shared almost everywhere. The layout of the chassis and suspension, the hard points, and body structure are pretty much shared, but technology has evolved and the U.S. consumer is different. We’ve changed a lot of tooling and components while trying to hold the overall architecture the same. For example, the geometry of the front suspension is slightly different, but we have got a welded high-strength-steel control arm and a forged-aluminum knuckle to take out some unsprung and overall weight. They’re both live-axle rear suspensions with leaf springs, but ours has a parabolic leaf spring that is lighter with less friction than a conventional spring.
We’ve gone to extensive high-strength steel in the frame to take out weight and make it stiffer to improve off-road performance and on-road ride and refinement. We have hydra-mounts on the body and hydraulic engine mounts. The differences were aimed at taking advantage of technology evolution to optimize for the U.S. consumer. We sell Ranger in very high volume in 180-plus countries, but it’s a different driving pattern here. People commute, travel, and vacation over longer distances on broken road surfaces at higher speeds, so the U.S. consumer prioritizes ride and refinement more than in some other markets. 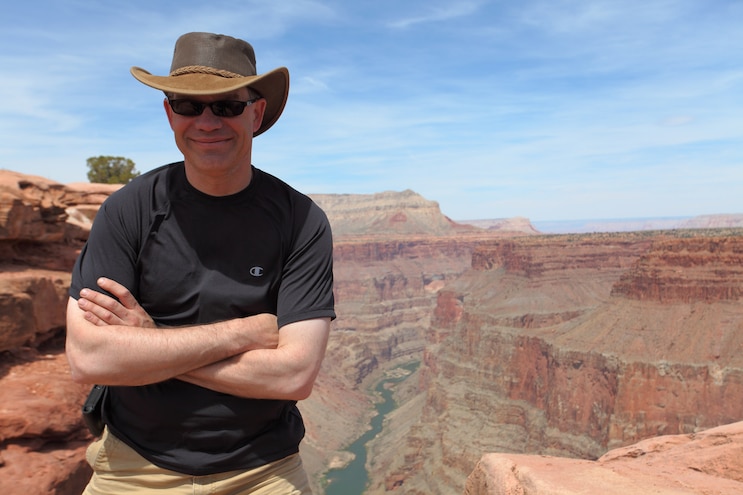 View Photo Gallery | 8 Photos
Photo 5/8   |   Interview Rick Bolt
TT: The old North American Ranger was canceled in 2011. Why so long to bring it back?
RB: We think it’s the right time. Fullsize trucks have gotten bigger, more technical, and more capable, which puts room beneath them for a midsize truck. For a lot of years, it didn’t make sense. You would be competing with yourself, taking sales away from F-150. The big areas for midsize trucks are the coasts and up through the middle of the country, where people live in urban areas and commute in heavy traffic and prioritize a smaller, more maneuverable vehicle.
TT: What is your leadership philosophy?
RB: A lot of people are involved in engineering a new product: all the engineering teams, design, purchasing, manufacturing. At any point in time, it ranged from 600 to 1,000 people that in some way were touching the program, and you can’t interface with all those people regularly. So you have to build teamwork, a shared vision for what the product wants to be, and a message that they can all grasp onto when they’re doing their work.

- OF
By Gary Witzenburg
92 Articles