Shop Class: Where Are The Cars? 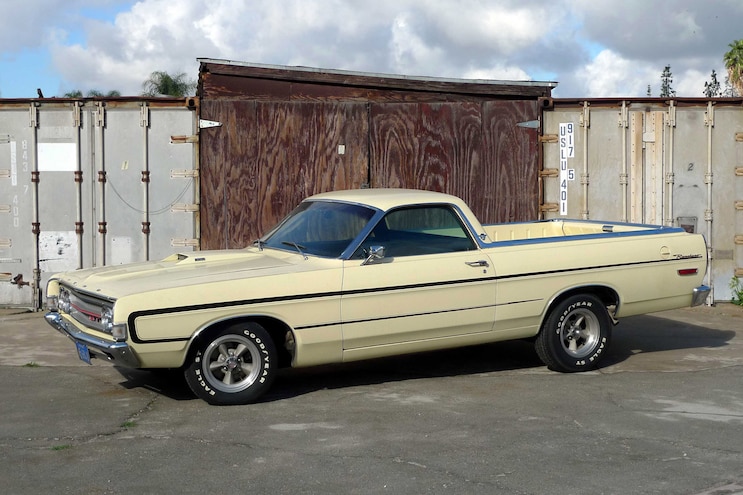 Nobody would have predicted, years back, that American automakers would even consider phasing out cars, but here we are. Ford, GM, and Fiat Chrysler are in the process of discontinuing a multitude of sedan models due to falling sales and focusing on utility vehicles and crossovers, which are becoming considerably more popular. Pickup trucks aren’t going anywhere.
Several factors produced the drop in car sales. In the past, the high cost of fuel drove the sale of a lot of economy-based cars, so with fuel costs down and technology dramatically increasing the fuel economy of bigger vehicles, mpg seems to be off the table.
Equally relevant is convenience. Bigger and higher-off-the-ground vehicles can fit passengers more comfortably, increase cargo capacity, and they’re just easier to get in and out of. But another aspect is the higher stance gives drivers more confidence on the road and, warranted or not, a greater feeling of safety.
An aftereffect of the increased volume of trucks and SUVs is the degradation of car drivers’ rank on the road. Sitting below the masses and unable to see past the taller vehicles in front is an understandable turnoff.
A lot more vehicles will be going electric or hybrid within the upcoming decade, but thankfully, for now, the U.S. gas-burning retro sports cars (e.g. Mustang, Challenger, and Camaro) are staying on the market. This confirms that the 20th century muscle-car era was something special.
With all that said, we’re going to pay a little tribute to several true cars of the past. It might be a bit different than lists you’ve seen before, but here are a number of remarkable automobiles from perhaps a sport-orientated, baby-boomer perspective.

The Chevrolet Corvette has been, and rightfully will continue to be, perceived as the all-American sports car. 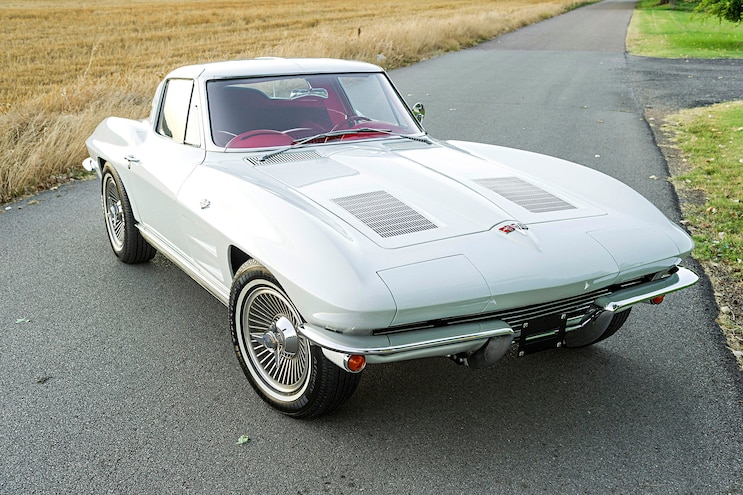 View Photo Gallery | 8 Photos
Photo 2/8   |   Shop Class Where Are The Cars 1963 C2 Corvette Coupe Sting Ray Mitchell Motor Trend
The first generation covered ’53 to ’62 model years as convertibles only. But the second generation (’63-’67, C2) changed everything.
The Vette continued with fiberglass body panels from the first generation and later added rear independent suspension.
Originally conceived as a 1959 concept car, the ’63 Corvette Sting Ray coupe took on a drastic, almost futuristic look. Its sleek bodylines, fastback rear end, and hidden headlights combined into what some consider the most beautiful American car ever built. In black, nothing comes close.
In 1965, Chevy upped engine displacement from the original 327-cid small-block to the 425hp big-block 396, with a 427 added in ’66.

We know the late Carroll Shelby as a muscle-car icon who designed a fleet of performance-modified Ford Mustangs, but the Cobra will always be remembered as his greatest accomplishment, and the badass of sports cars.
Shelby was an experienced racer who wanted to build a car of his own, but didn’t have the independent resources. So he contacted AC Cars in the UK about a joint project utilizing its AC Ace—a lightweight, handbuilt, aluminum-body coupe. He then teamed with Ford Motor Company to supply the first V-8 engine ever run in this model.
In 1961, AC engineers modified and shipped the body to the U.S., where Shelby installed a Ford 221 Windsor V-8, and the American/British hybrid, Shelby Cobra prototype, came into being. 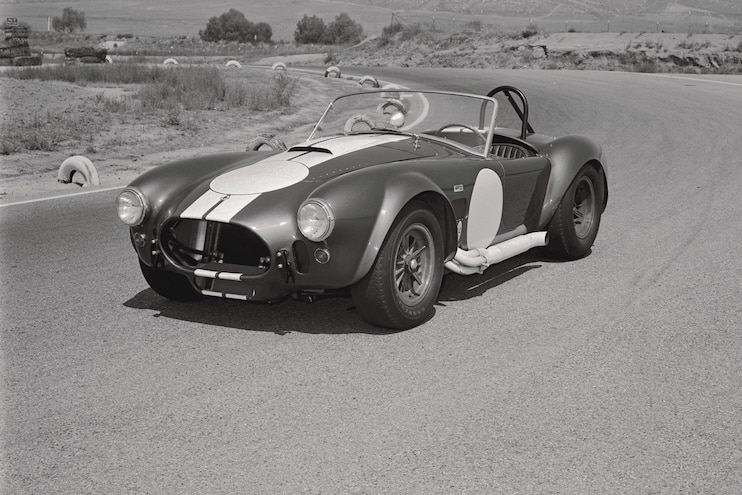 View Photo Gallery | 8 Photos
Photo 3/8   |   Shop Class Where Are The Cars Tribute To Carroll Shelby
The Cobra shared its up and downs in racing and production, but the Mark III in 1965 became a favored historic model. Modified to fit and withstand 485 hp from a Ford 427 “side oiler” in its competition models, with a curb weight of 2,355 pounds, the 427 Cobra was just crazy. Jaws drop when one of these beasts reaches earshot. The ground rumbles and the wide-mouth radiator opening looks like a Cobra ready to eat you up and spit you out.
Only one of two ’66 models, to which Shelby added twin superchargers and renamed “Super Snake,” still exist.

This one may seem a comparatively odd pick, but the eighth-generation front-wheel-drive Cadillac Eldorado strikes a chord. The Eldorado model ran from ’53 to ’02, but ’79 to ’85s were the last to show legitimate Cadillac character.
Kind of boxy, but the long body, extended hood length, and chrome bumpers spelled Cadillac. Not the highest of quality builds, and its reign ended with the disastrous, underpowered HT-4100 V-8 under the hood. But check one out in black or black-cherry paint. Or better yet, add the Biarritz package with a stainless-steel roof and chrome trim from the rear glass forward. This was the luxury coupe for big-businessmen and/or organized-crime figures. 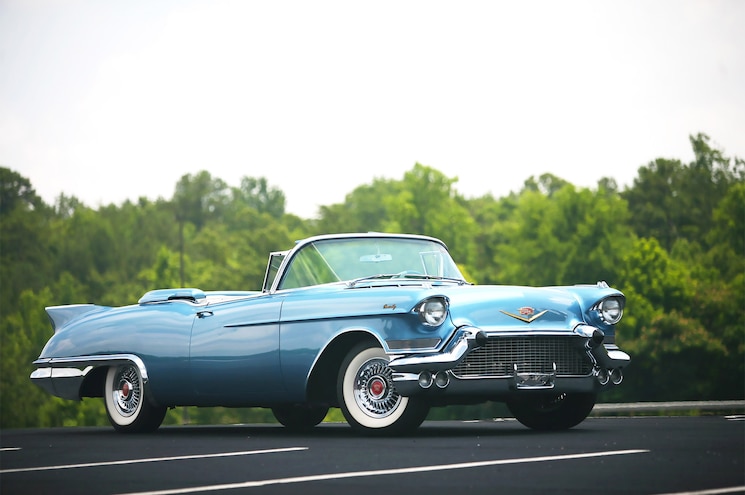 View Photo Gallery | 8 Photos
Photo 4/8   |   Shop Class Where Are The Cars Power Tour 2015 1957 Cadillac Eldorado Biarritz Convertible 002
The ninth generation was downsized and lost its charm, and the tenth was the last of its kind.

This is tough, with so many classic Ford ponycars to choose from, including Shelby, but the ’69 BOSS 429 stands out for a lot of enthusiasts.
First off, the ’69 Mustangs can easily be considered the most attractive of the bunch, and the retro-models based on ’69 add to that belief. The 429 was also built in ’70, but Mustangs going from four to two headlights that year sure seemed to be a cosmetic typo. View Photo Gallery | 8 Photos
Photo 5/8   |   Shop Class Where Are The Cars 1969 Ford Mustang Boss 429 9692
The Ford 429 engine used semi-hemi, combustion-chamber, aluminum cylinder heads in its design for NASCAR. The problem was the super-big-block wouldn’t fit in a factory-configured Mustang chassis. So Ford assigned Kar Kraft in Michigan to make it work.
Significant expansion of the engine compartment in conjunction with suspension modifications were performed on a 428 Cobra Jet Mustang platform, air conditioning wasn’t possible, and the battery was relocated to the trunk.
Power front disc brakes and a rear sway bar stabilized the ride. A huge, manually controlled scoop centered the hood and BOSS 429 badges on the fenders and a few additional cosmetic tweaks finished the job. Simple, but hot!
The engine was detuned from the NASCAR version, but Ford’s power rating at 375 hp has always been questionable—believed to be understated to help on insurance cost for potential buyers. Outside testing since then puts it closer to 420 hp.
There were BOSS 302 Mustangs (classics in their own right) built alongside the 429, but hey, bigger is better.

A mystery, which may never be solved, was the discontinuation of the perfect muscle-car model name: Barracuda. It’s a large, sleek, ferocious, scary-looking fish with razor-sharp teeth. The articulation of the name is art, abbreviated ’Cuda—what more could a car enthusiast ask for?
The preliminary answer was “Hemi ’Cuda.”
The Plymouth Barracuda spanned three generations, from ’64 to ’74. But the third generation beginning in ’70 eclipsed the meaning of the word with a sharp, modernized look to an all-new platform, plus the addition of the legendary 426 Hemi to its powertrain lineup. 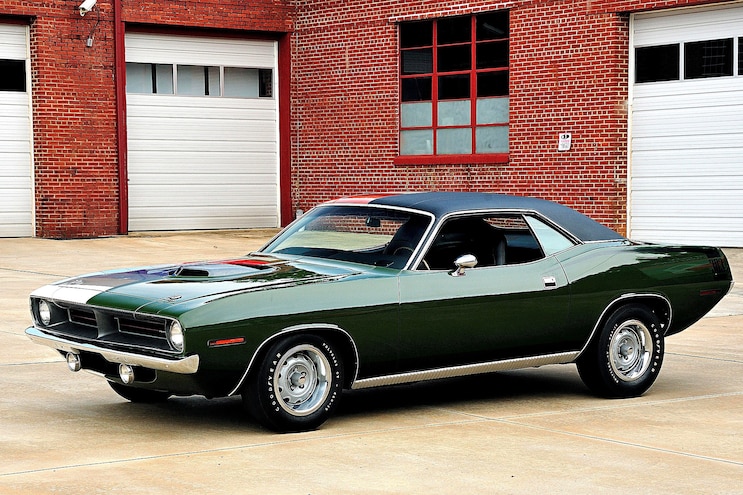 View Photo Gallery | 8 Photos
Photo 6/8   |   Shop Class Where Are The Cars 1970 Plymouth Barracuda Stock Side Front Three Quarter Alt
Unfortunately, the 1970s gas crisis eventually shut down Barracuda production.
In 2001, with only the compact Neon model remaining, the Plymouth brand name was lost—talk about a sad ending.
It’s rumored the Barracuda may be making a comeback under the Dodge brand, while continuing with the Challenger. Fingers crossed.

Station wagons have been around forever to aid in middle-class family transportation before SUVs and minivans filled the niche.
But nothing ever really replaced the coupe utility—speaking English, a two-door car with a bed. We accept that compact pickups took the spot, but they’re not the same thing. The attribute was the usefulness of a pickup while still driving a car.

View Photo Gallery | 8 Photos
Photo 7/8   |   Shop Class Where Are The Cars 1969 Ford Ranchero Rescue Front Three Quarter
The concept originated in the 1930s, but within the timeframe we’re focusing on, the Chevrolet El Camino and Ford Ranchero are the most notable. They were simply stretched fullsize cars with exterior cargo beds instead of a back seat and trunk.
On focus, while the fifth-generation Ranchero was available with the Ram-Air 429 Cobra Jet or Super Cobra Jet engines, the award for coolest (with a big-block) goes to the ’70 El Camino SS. Most came with the 396, but several Super Sport models were produced pushing 450 hp.
The El Camino finished at the end of its fifth generation in ’87, far down from its peak.

If ever a muscle car became a star due to a hit film, the Trans Am in Smokey and the Bandit fits the mold.
Chosen by Burt Reynolds and director Hal Needham, a black ’77 Firebird Trans Am Special Edition with T-tops, a 400-cid (6.6L) V-8, and a four-speed transmission was the pick. In hindsight, what else would have worked?
The Pontiac Firebird lived four generations from ’67 to ’02. The second generation (’70-’81) received a successful face-lift in ’77, going from two round headlights to four rectangular, and sharpening the nose. This may have been the trigger point that pushed it into the limelight, along with the fire-breathing bird decal surrounding the shaker hoodscoop—of course. 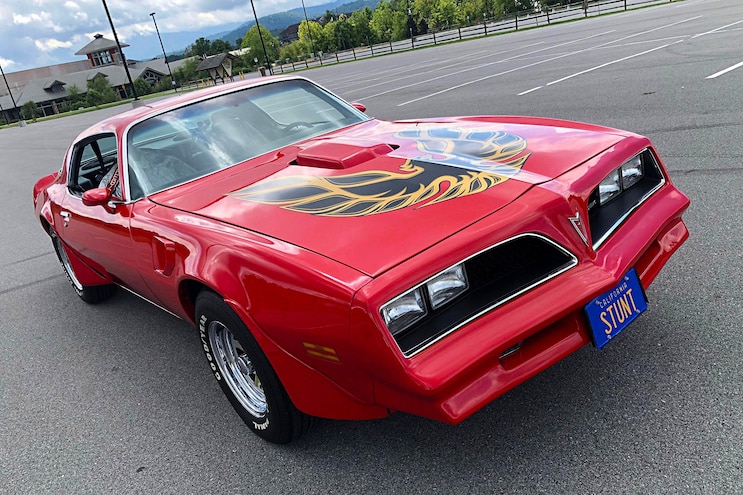 View Photo Gallery | 8 Photos
Photo 8/8   |   Shop Class Where Are The Cars Red 1978 Pontiac Trans Am Hooper
Did we mention Rocky Balboa also drove a Trans Am?
The Firebird lifespan expired in ’02, Pontiac in 2010.
Bet a lot of folks reading have a favorite they’d like to add to the list. We love trucks, but we miss the cars already!