Tow vehicle for the family camper or the farm trailer, this stylish COE does it all 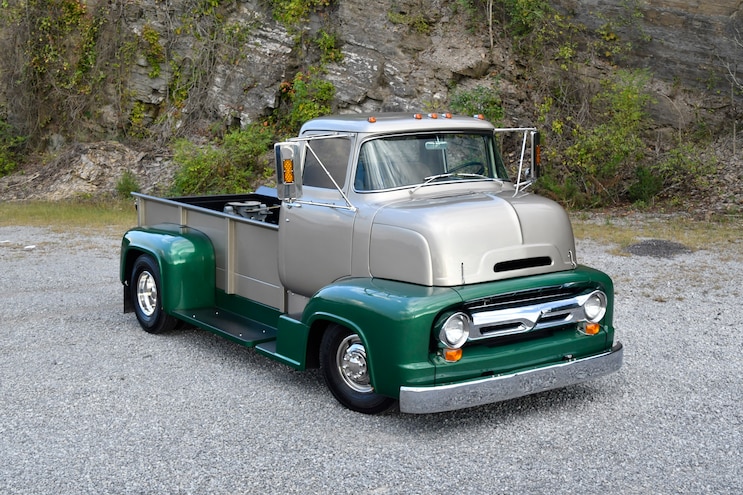 As serious truck enthusiasts, every now and then, a particular body style captures our collective interest, thanks to a combination of the rig’s general layout and overall function. When the pickup is at the center of a build project, enthusiasm builds when we realize its potential, encouraging us to take things to the next level. That’s the way things played out for Rick Sieboldt from Elizabeth, Indiana, as he hashed out a plan for his ’56 Ford C-600 cab-over engine.
The COE’s distinctive look makes it as much a workhorse as a show ride—perfect for hauling the family camper and enjoying weekend truck events. Rick is an avid enthusiast (for more than four decades) and, as of this writing, it has been about 25 years since he first found this truck on the side of the road in Salem, Indiana. It had a For Sale sign on it and was in rough shape. He smiles when he describes the build as a continuing part-time effort, since life occasionally gets in the way of hobbies. A few changes in direction also slowed the project since he originally planned to create a four-door version and had gone so far as to tack weld two cabs together before scrapping the idea.
Next, he considered converting it into a car hauler, even buying a donor truck with a wedge bed. That plan also became impractical once he realized how much room the finished truck would take up in the garage. The final plan was to make it a tow vehicle that could be used to pull the family’s RV and a gooseneck trailer on the farm. 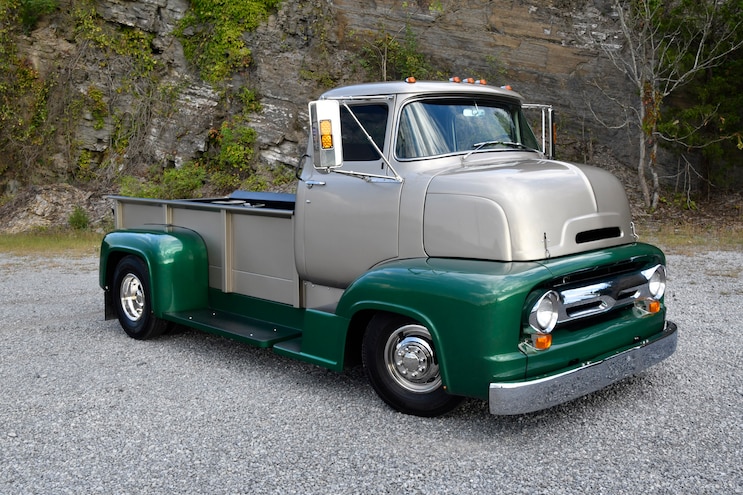 View Photo Gallery | 61 Photos
Photo 2/61   |   Ford cab-over-engine trucks already have a distinctive look, made even better when a few custom touches are added. On Rick Sieboldt’s C-600 smaller front fenders from a ’56 Ford pickup are employed as a better fit for the 16-inch Dodge wheels.
Once a detailed plan for the truck was established, Rick began the build in earnest. Since the original donor vehicle was in bad shape, an Internet search turned up parts from around the U.S. Rick found a replacement top in Texas then purchased “two and a half more trucks” at a show in Elkhart, Indiana. Those came from Kansas and Colorado. Once the sizable collection of bits and pieces was gathered, the assembly process began.
From the outset, Rick’s goal was to create a rig that is more functional than custom. However, somewhere along the way, the truck started orchestrating its own destiny. With each upgrade, quality levels became higher and the sophistication more impressive. While it’s pretty enough to win trophies at every outing, the truck still has a definite functional side, thanks to one big change.
Swapping a ’92 Dodge D-350 dualie chassis into the old Ford transformed it into a reliable, modern workhorse. Retaining the original Dodge independent front suspension, steering, brakes, 30-gallon fuel tank, and Dana 70 rear with 3.54 gears, Rick replaced all worn components and also added new Dodge shocks. “The swap not only dramatically improved the handling, but the frame is new enough so that you can still buy parts for it,” Rick says. 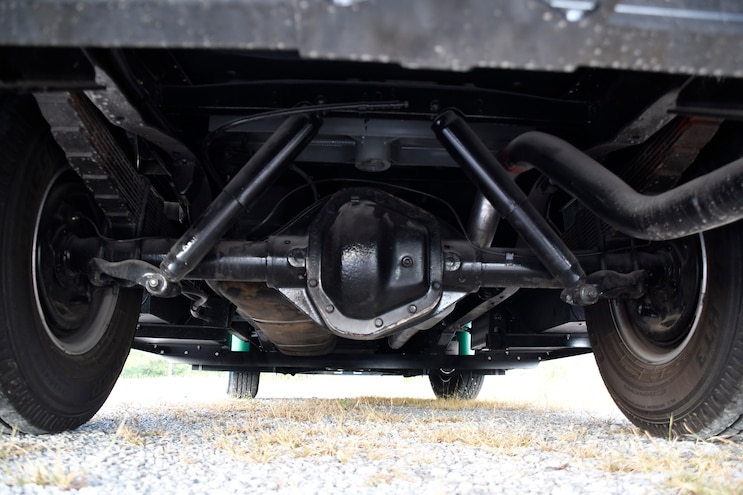 View Photo Gallery | 61 Photos
Photo 3/61   |   The biggest change is the ’92 Dodge D-350 chassis, with the donor truck providing modern suspension, brakes, and steering. It pulls the family camper with ease.
Although the donor truck was a gold mine of usable parts, its original 5.9L Cummins engine was not salvageable. Fortunately, Rick found another 5.9L Cummins that was originally installed in an Oshkosh bus. Everything about the 12-valve engine is heavy duty, and Rick especially likes the fact that there are no sensors or electronics to worry about. Currently, the only change is the addition of a one-wire alternator. However, Rick plans to modify the Cummins P-7100 injection pump for additional horsepower. The Allison AT545 four-speed automatic transmission is stronger than the original Dodge gearbox, with the only upgrade being a pair of new transmission coolers. The truck rolls on stock 16-inch Dodge wheels, dressed up with chrome wheel covers. 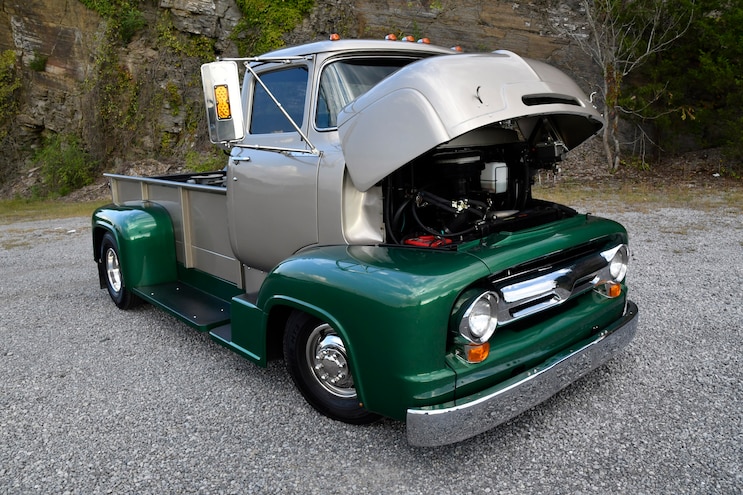 View Photo Gallery | 61 Photos
Photo 4/61   |   Lifting the hood on this COE provides easy access to the 5.9L Cummins engine that lies between the framerails. 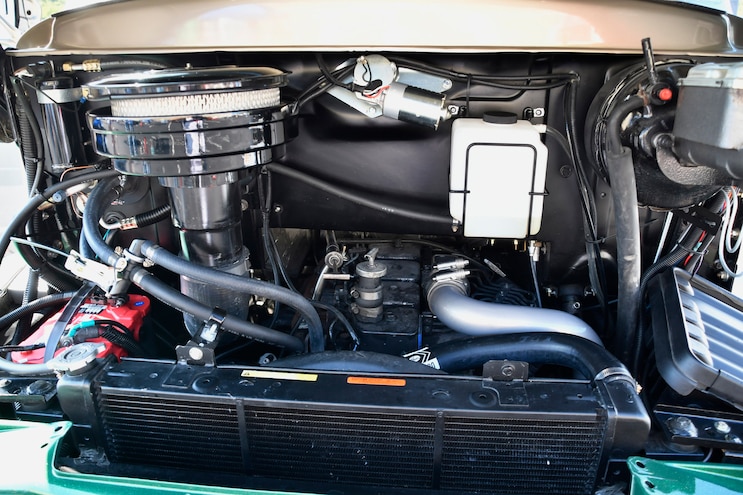 View Photo Gallery | 61 Photos
Photo 5/61   |   The original powertrain in the donor Dodge was tired, but Rick found an even better choice: a heavy-duty 5.9L Cummins engine and Allison four-speed automatic transmission that originally came from an Oshkosh bus. A few performance upgrades are planned for this rig.
Satisfied the truck could pull its own weight and then some, Rick made customizing the exterior his next priority. Up front, smaller ’56 Ford F100 pickup fenders reshape the overly large opening of the original COE fenders. The reverse approach is used in the rear, with the stock fenders cut and extended to 18 inches in order to cover the dual rear wheels. Doors are updated with one-piece side glass and fitted with West Coast mirrors holding LED lights.
With projects like this, while some replacement parts can be simply welded in place, others demand more creativity. The 10-foot bed on Rick’s rig comprises a combination of formed sheet steel blended with sides and a front panel from Mid Fifty F-100 Parts. A tailgate from one of the donor trucks was sectioned to fit the new opening and an elaborate substructure was created for the bed floor—rigid enough to support a B&W gooseneck and fifth-wheel hitch. Additional framework was created to reinforce the cab along with a new radiator support under the hood. Everything is designed to be easily disassembled in the event repairs are necessary. Rick did all the paint and bodywork himself, using color-matched bedliner in areas like the steps, running boards, and bedsides, underscoring the functional nature of the truck. The color is Chrysler Almond Metallic along with a custom-mixed shade Rick calls “Paint Bucket Green” accented with Green Go, Gangreen, and Prizmatique Multicolor flakes for a little extra sparkle. 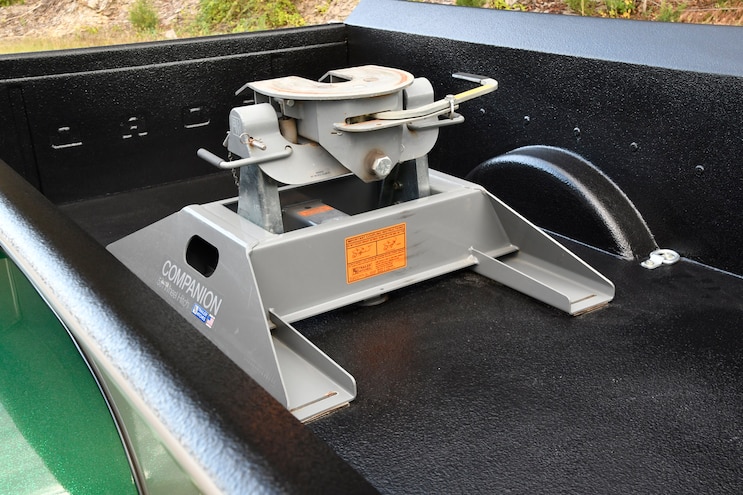 View Photo Gallery | 61 Photos
Photo 6/61   |   The heavy subframe under the bed ensures the truck functions as a sturdy tow vehicle for Rick’s camper and gooseneck trailer. Color-matched bedliner underscores the C-600’s functional roots.
The final phase was the interior and, once again, it was a family project with Rick, son John, and wife Dolores working together, using such parts from Mid Fifty as ABS door- and headliner panels, 3-inch dash extensions for the air-conditioning, seatbelts, and more. John routinely works with fiberglass, so it was easy for him to form a custom engine cover in the cab. Seats from a ’97 Dodge Caravan ensure everyone is comfortable inside and the Sony stereo plays through four speakers and entertains the group on road trips. Black carpet wraps up the interior. Rick plans on adding a vintage sun visor, too. 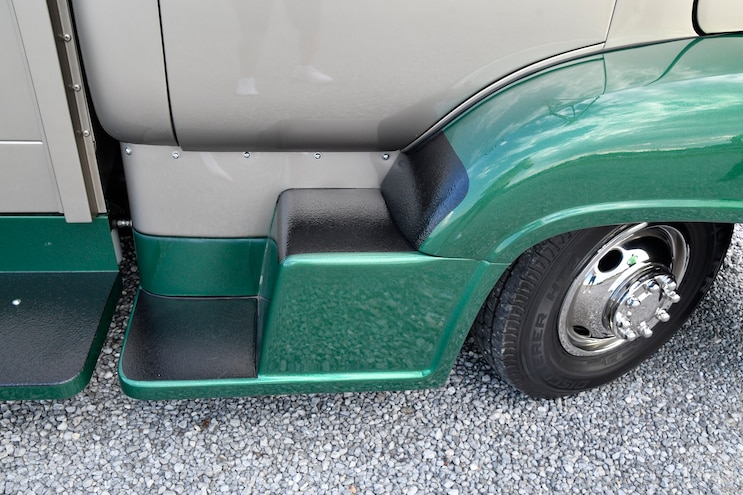 View Photo Gallery | 61 Photos
Photo 7/61   |   Steps built into the front fenders make it easy to enter and exit this tall rig. Bedliner on all the wear areas ensures a nonslip surface. 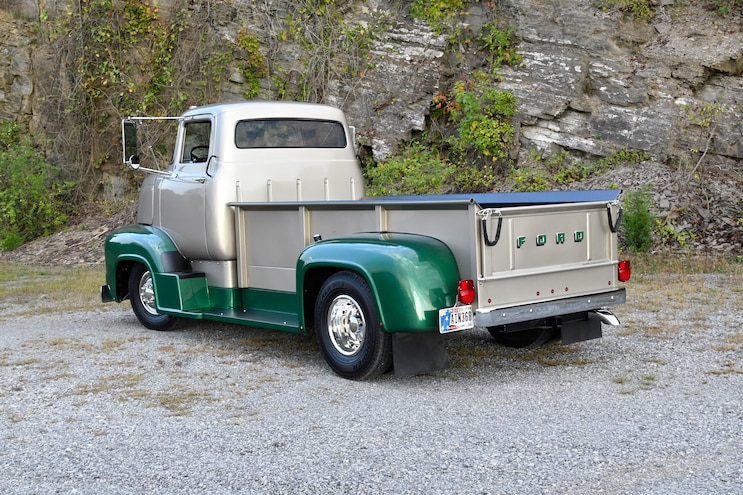 View Photo Gallery | 61 Photos
Photo 8/61   |   The original rear fenders are sectioned and widened to cover the dualie rear axle. The pickup bed is a combination of aftermarket parts and carefully formed sheet steel. 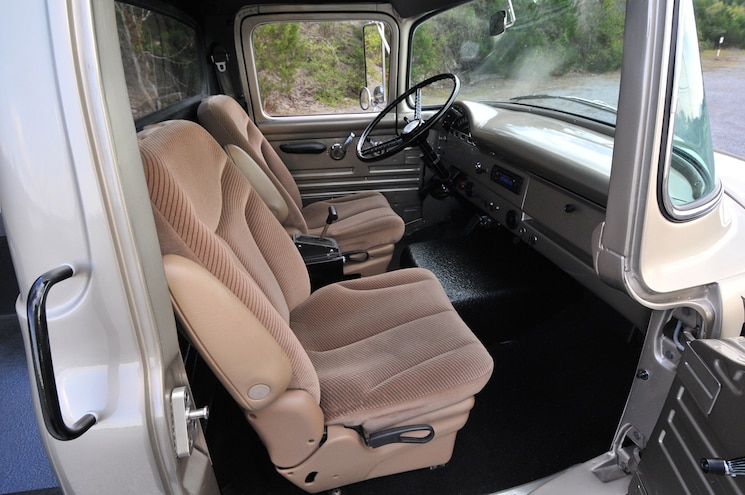 View Photo Gallery | 61 Photos
Photo 9/61   |   Plush seats from a ’97 Dodge Caravan provide modern comfort for driver and passenger. The Almond and Green interior features a fiberglass engine cover and Sony stereo with speakers in the kick panels and behind the seats. 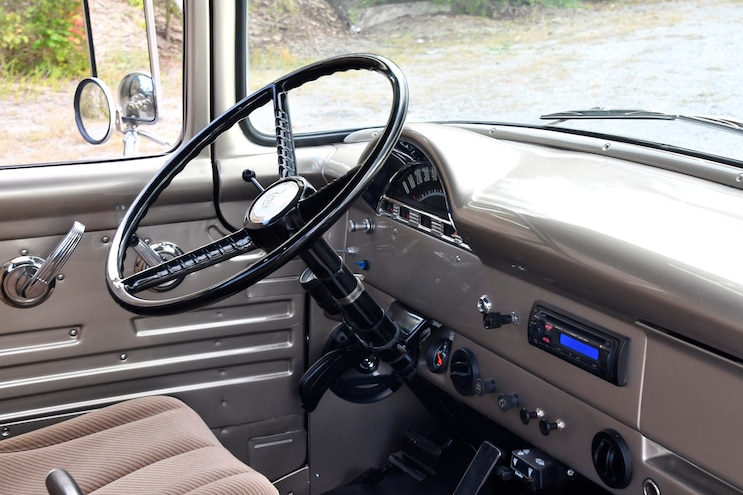 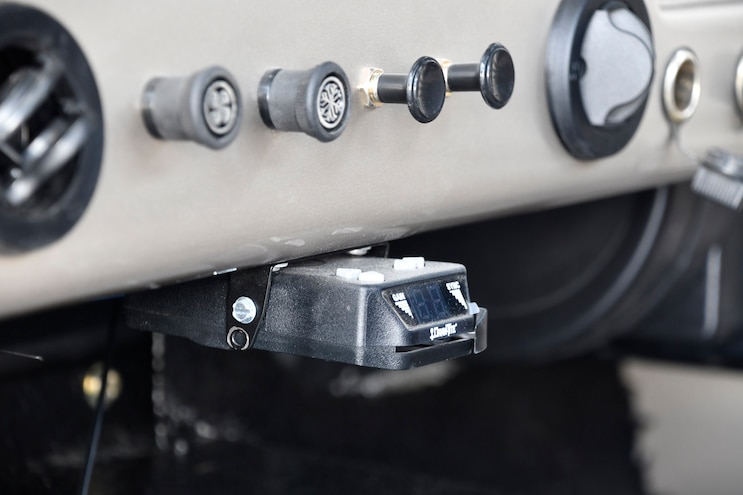 View Photo Gallery | 61 Photos
Photo 11/61   |   This truck works for a living. When Rick hauls his family’s camper, the Draw-Tite Brake Controller automatically adjusts the trailer's braking based on the deceleration of the tow vehicle. 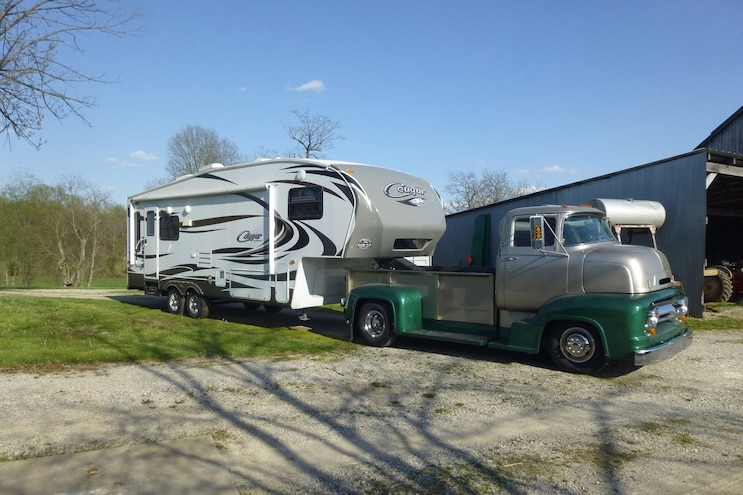