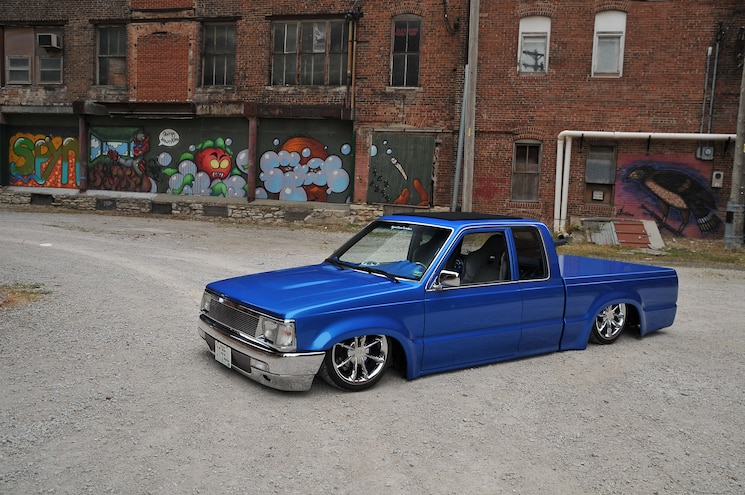 There is no timetable for building a truck. Some will take a year to construct one from the ground up and some could take a lifetime. It took Michael Brott seven full years to create his masterpiece. Albeit it wasn’t seven straight years of building; he took time out to have a career, earn money for the project, and develop ideas. As a child, Michael inherited a gift from his father: “My dad was a painter,” Michael tells Truckin. “He painted canvas oil paintings, and I learned from him.” 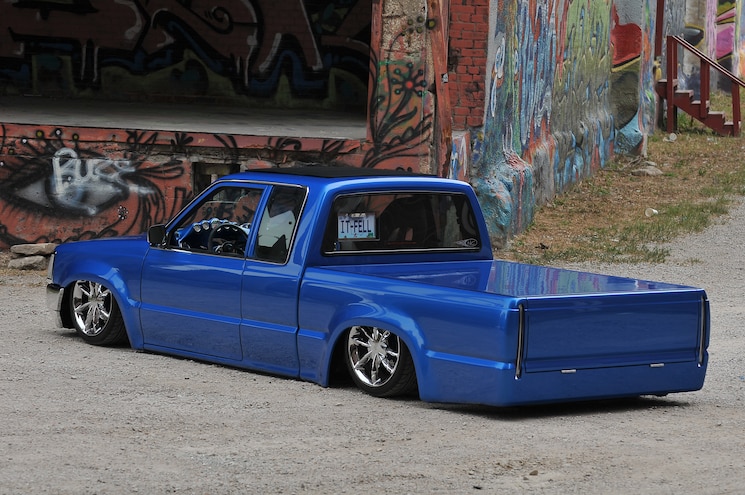 View Photo Gallery | 13 Photos
Photo 2/13   |   1986 Mazda B2000 About Time Rear 3q
At 12, Michael attended a local truck show in his hometown and was mesmerized by a mini named Juke Box Hero, which was built by students and teachers at a psychiatric hospital. It was four years later that he purchased his first truck: a standard cab Mazda. After working his magic on the standard cab, he wanted something a bit bigger. He was able to purchase an ’86 Mazda extra cab from a close friend who had it all set up for shows. The theme on it was old school and it was already lowered, so Michael wanted to do a complete makeover. 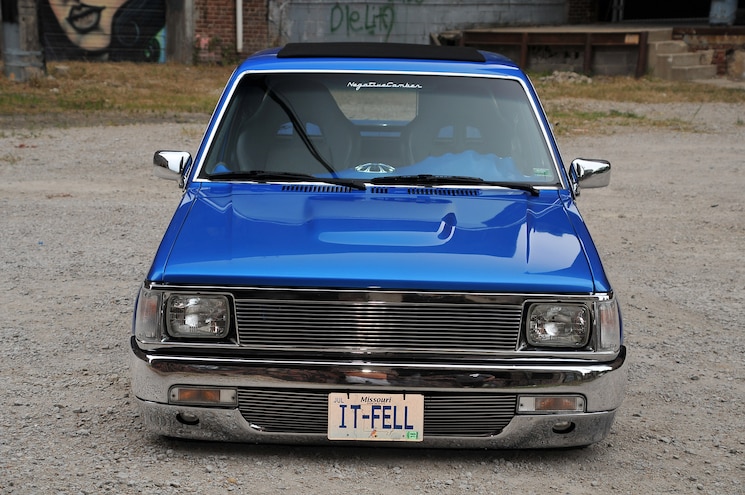 View Photo Gallery | 13 Photos
Photo 3/13   |   1986 Mazda B2000 About Time Front
Almost immediately, the older checkerboard paint was stripped from the body and the four-link was added with the help of good friend Dave Jackman. The 3-inch traditional body drop was performed and the engine mounts were lowered 1 inch for the engine to clear the hood. Using his own artistic ability, Michael coated the Mazda with silver metallic. The next step took a couple of years, with bodywork coming slowly. “I was doing everything myself, so it was pretty time consuming,” he adds. “I had to shave everything I could as well as do the 4x4 sheetmetal bed, fenders, and B2600l bubble hood.” 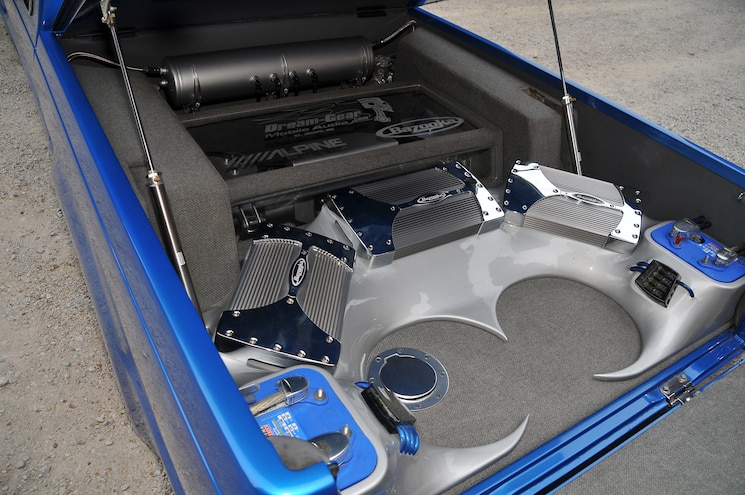 View Photo Gallery | 13 Photos
Photo 4/13   |   1986 Mazda B2000 About Time Bed
As the years passed, Michael was once again ready to paint and decided it was time to change the color. The silver was done well, but he wanted something that would stand out even more. The ’00-to-’03 factory Ford Mustang Bright Atlantic Blue was chosen, and he used a friend’s shop to finish the paint and bodywork. With the exterior now sporting a new color, the cabin had to be reworked. Using his flare as an old-school mini-trucker, Michael mixed tweed with vinyl to add a little update to the classic material. His friend and stereo installer Brandon Brewka of Dream Gear Mobile Audio in St. Joseph, Missouri, added all the fiberglass and helped with the audio and visual upgrades. 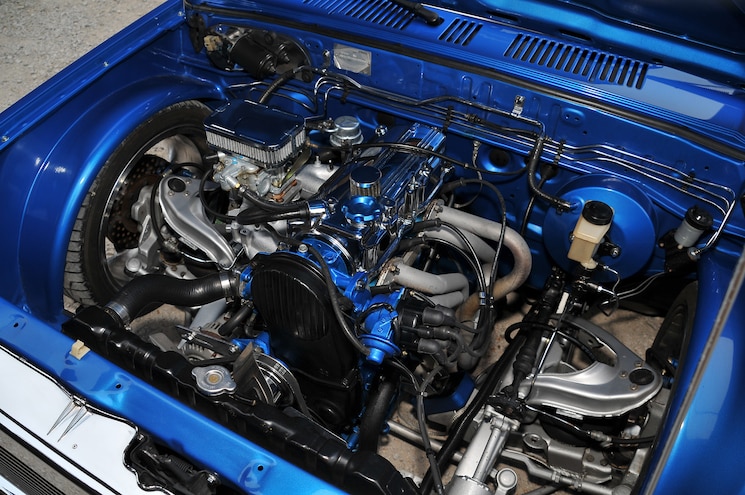 View Photo Gallery | 13 Photos
Photo 5/13   |   1986 Mazda B2000 About Time Engine
Michael’s final steps were making the Mazda even more unique by adding a full sliding ragtop as well as a motorized tonneau cover using air cylinders. Custom plexiglass air tank brackets were made by Doug Lundy. When the stock motor seized, a better performing and more updated 2.2L motor and transmission were installed. The hubs and axles were redrilled to a 5x4.5 bolt pattern to provide better options for wheels.
About Time may have taken a lot longer than most builds, but with the gaps of time in between, Michael was able to develop different ideas during the process to make it perfect for himself. He wishes to thank his loving parents for all their guidance and support and for teaching him that perseverance pays off in the long run. 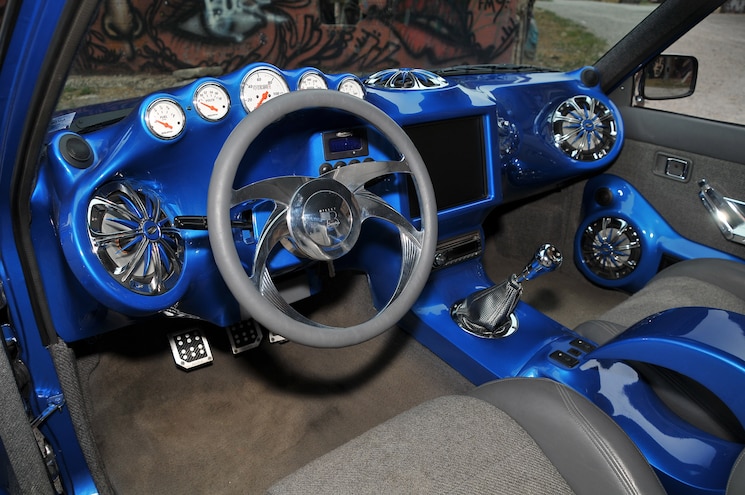