The Camaro of Crossovers 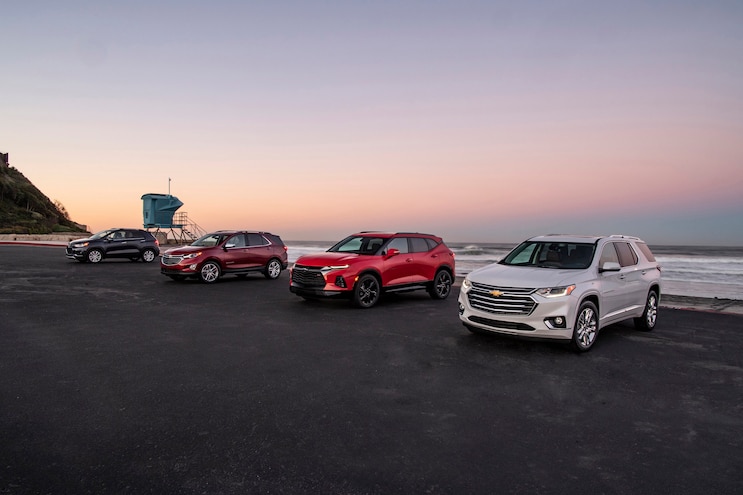 There we were, pushing an all-new 2019 Chevrolet Blazer RS hard through miles of two-lane twists and turns on the high plateau west of San Diego on the way to Julian, California. Just ahead, another hard-driving scribe in another new Blazer RS. Ahead of it, none of the usual local traffic or revenuers (cops) filling ticket quotas. The other one pulled off for photos, but whoever was piloting it was clearly enjoying this unfettered romp as much as we were.
We kept reminding ourselves that we were driving a front-wheel-drive–biased midsize CUV, not a low-slung Camaro. Its 308hp 3.6L V-6 was strong, and its nine-speed automatic selected proper ratios into, through, and out of each corner. Its Camaro-like EPS steering (16:1 ratio standard, 15:1 on the RS) was precise, its brakes sure and fade-free, and its available 21-inch tires clinging to the asphalt like proverbial Velcro. It might have been the most exhilarating CUV drive we’ve tasted this side of a racetrack run. Our only disappointment was the lack of steering-wheel shift paddles, though we eventually figured out that we could manually up- and downshift for corners with a rocker switch with the console shift lever in “L.” 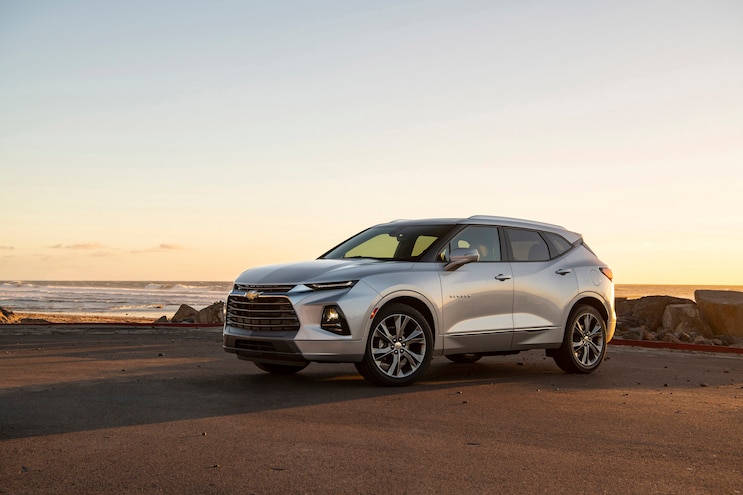 View Photo Gallery | 24 Photos
Photo 2/24   |   First Drive 2019 Chevy Blazer 3q Front
When we interviewed Rick Spina, this surprising new Blazer’s executive chief engineer, he confirmed that its agile on-road handling was no accident. Its mission began with aggressive styling to set it apart in the increasingly tough and competitive field of midsize CUVs and finished with a mandate for its dynamics to live up to that sporty new look.
Earlier that week, we had attended Honda’s launch of its competing all-new 2019 Passport midsize CUV, which is aimed in a different direction—rugged off-road prowess—in its own bid to stand apart from the pack. Each design and development team had a mission to appeal to a different subset of CUV buyers, and both have nicely succeeded. There are also standard Blazer and upscale Premier models wearing less sporty trims (some powered by a base 193hp 2.5L I-4), but this athletic RS model is the new Blazer’s standard-bearer and image-setter.
Slotting midway between Chevy’s compact Equinox and three-row Traverse, it offers five-passenger seating with up to 64.2 cubic feet of cargo space with its 60/40 split, sliding second-row seats (easily) folded flat, plus a cargo-management system with rails and a cargo fence standard on RS and Premier. Also available are a panoramic dual-pane power sunroof, all-wheel drive (with advanced twin-clutch torque vectoring on RS and Premier), and active safety features including lane change, blind zone and rear cross traffic alerts, adaptive cruise, lane departure warning, lane keep assist, forward collision alert, and auto braking. 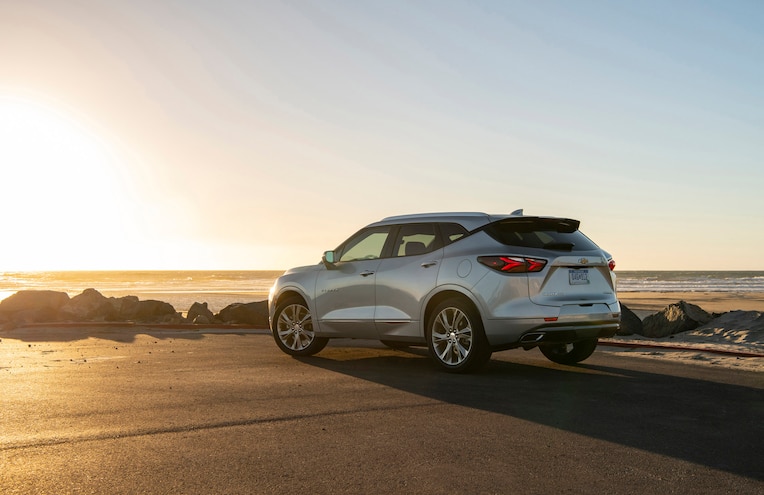 View Photo Gallery | 24 Photos
Photo 3/24   |   First Drive 2019 Chevy Blazer 3q Rear
Longer and wider than Equinox on a longer wheelbase and wider treads, it sports a high beltline and dramatic sculpting for an athletic look from all angles. When we were tailing that other Blazer RS, it looked broad-shouldered and hunkered, not tall and tippy like some CUVs. HID headlamps and LED daytime running lamps are standard, and its taut derriere sports dual-element LED Chevy-signature taillamps, dual exhausts, and an integrated tailgate spoiler. “The Blazer has attitude,” says John Cafaro, Global Chevrolet Design executive director. “It looks commanding on the road while fulfilling the promise of versatility at the heart of every Chevy crossover and SUV.”
Its surprisingly roomy cabin echoes the bold exterior with a padded knee area, large, round vents (red-rimmed to match red stitching in the RS upholstery), door grab handles, standard dual-zone climate system, specific colors and trims in the three models, and an overall well-crafted look. Its 8-inch-diagonal Chevrolet Infotainment touchscreen system—with 4G LTE Wi-Fi (with 1-month/3GB data trial) and Apple CarPlay and Android Auto compatibility—is among the user-friendliest in the business, and we appreciated the wireless phone charger and multiple USBs. There’s a volume knob (but sadly no tune/scroll knob) and a row of HVAC and other buttons laid out nicely underneath. Also appreciated were the standard USB-A and (new) USB-C ports and a 110-volt power outlet on the rear of the center console and the terrific available surround-view camera system. 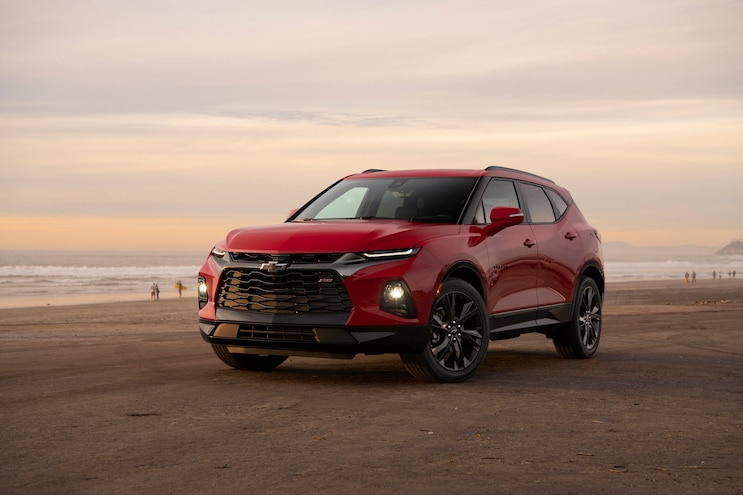 View Photo Gallery | 24 Photos
Photo 4/24   |   First Drive 2019 Chevy Blazer RS
The standard 2.5L four delivers respectable performance (and sounds aggressively raucous at full throttle) with 188 lb-ft of torque, while the 3.6L V-6 standard in RS and Premier—with GM Active Fuel Management (AFM) that deactivates half of its cylinders to save fuel when lightly loaded—ups the ante to a stout 270 lb-ft. Both engines also boast direct fuel injection and a fuel-saving “intelligent” stop/start system that seamlessly shuts them down during stops, then restarts when the brake is released. Standard Traction Select offers Normal, Snow, and Sport modes, and the available AWD systems can be disconnected from the rear axle to operate more efficiently when AWD capability is not needed.
Tow ratings are 1,500 pounds with the 2.5L and 4,500 pounds with the V-6. Available Hitch Guidance helps align a trailer, while Hitch View eases hooking it up without a second person to assist. Also available are an electronic-locking glovebox big enough for a small handbag, Comfort-open windows (activated by the key fob) that drop to let heat escape before entering on a hot day, and heated/ventilated front seats and a heated steering wheel that work with remote start. Heated outboard rear seats are standard on Premier and available on RS. Adaptive cruise and a rear camera mirror are available on RS and Premier, and a hands-free power liftgate with Bow Tie logo projection is standard on both. 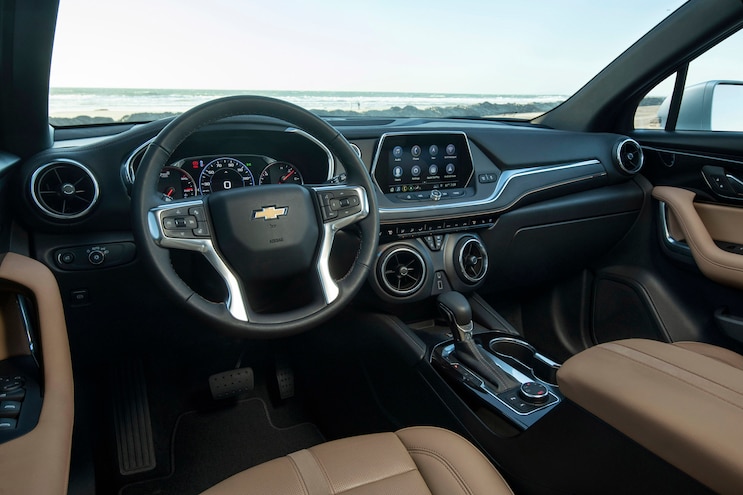 View Photo Gallery | 24 Photos
Photo 5/24   |   First Drive 2019 Chevy Blazer Interior
Our test FWD RS with a $3,575 “Enhanced Convenience and Driver Confidence II” package stickered at just under $46K, while an AWD RS with that plus a $2,495 “Sun and Wheels” package moved well into $50K territory. EPA fuel economy is 22-mpg city, 27 highway for the four-cylinder FWD Blazer, 20/26 for the V-6 FWD and 18/25 with AWD. On the less aggressive, traffic-slowed second leg of our drive, we averaged an indicated 23.3 mpg.
We agree that there may be a fair number of potential buyers moving to CUVs from sports cars and sport sedans, and this athletic new Blazer is designed especially for them.