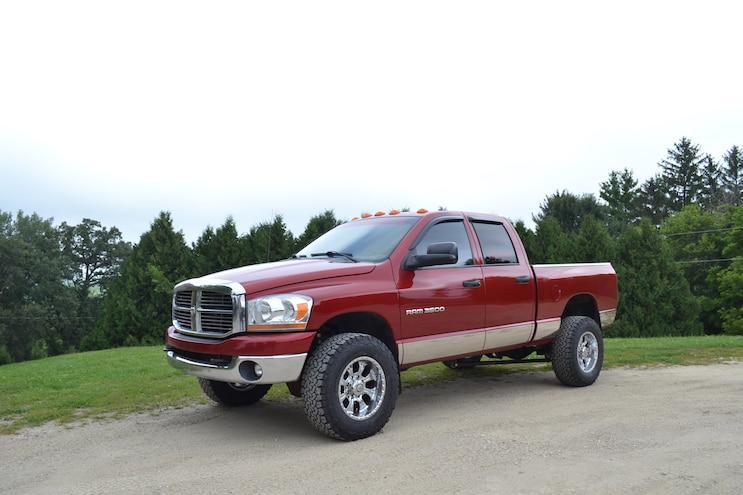 One of the most engaging qualities of diesel pickups is their ability to look relatively stock while being more than capable of hauling the mail. Sure, there’s an exhaust stack on Matt Krueger’s ’06 Dodge Ram 3500, but not much else gives away the fact that it runs hard. And that doesn’t change under the hood, either. The turbocharger looks stock, and while the 5.9L Cummins engine has a cold-air intake and a few other bolt-ons (what truck doesn’t these days?), the fact that it’s a 1-ton rig just enhances the perception that it’s not a hot ride. So, how does it make nearly 800 hp?
As it turns out, a careful selection of just a few parts and pieces can do quite a bit. Matt is a sled puller who competes in the Heartland Truck Pullers Stock Appearing Class. In such a loosely restricted category, competitors can get away with quite a bit as long as the engine appears stock (well, maybe if you don’t look too close).
The bottom end of the Cummins powerplant actually is stock, and so is the cylinder head, save for a set of ARP studs. The turbo is the primary deception, as it’s actually a T3-flanged 68mm ’charger from Industrial Injection that cranks out 54 psi of boost through the stock intercooler. Twin CP3 injection pumps are allowed, so Matt uses Industrial’s Dodge Dual CP3 setup for mounting a Fleece Performance Engineering CP3K pump. The injectors are 100-percent-over pieces, also from Industrial. 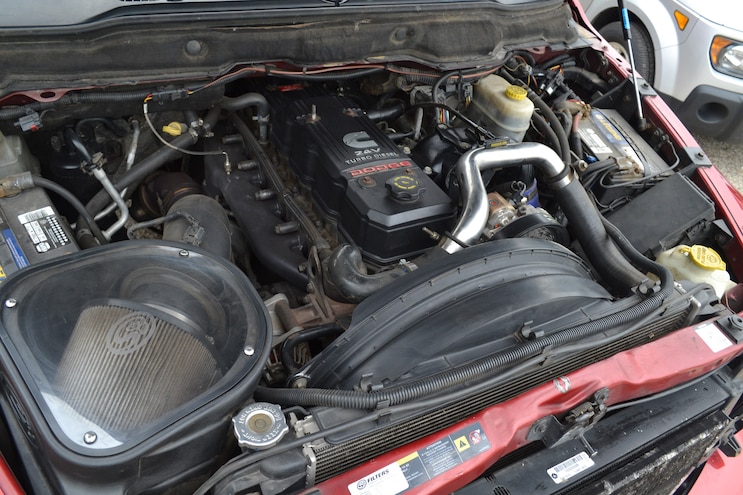 View Photo Gallery | 19 Photos
Photo 2/19   |   At first, the engine in Matt Krueger’s ’06 Dodge Ram 3500 may look like it has just a few bolt-ons, but that’s actually the point. Despite the deception, it makes a dyno-proven 776 hp, and 1,350 lb-ft of torque.
Matt owns Krueger Diesel, so he was able to rebuild the truck’s 48RE four-speed automatic transmission himself. Dave Goerend selected the right parts, which included a billet input shaft along with a 2,200-rpm-stall triple-disc torque converter.
The 1-ton’s suspension remains primarily stock. However, Longhorn Fab Shop lock-out blocks and traction bars are installed on the rear axle to distribute weight evenly and prevent wheelhop while sled pulling. Since Matt knows a stout drivetrain and all-terrain tires have a tendency to break axles, he also installed a set of Yukon Gear & Axle 4340 rear axles and had the housing heavily braced. The front axle and suspension are surprisingly stock, save for being fitted with a Detroit Truetrac differential.
Matt classifies his pickup as a puller, although it does see some street and dragstrip action. Despite its hefty 7,450-pound weight, the truck has clicked off 12-second elapsed times on the same all-terrain tires. Matt doesn’t tow very often, but if his rig can pull a 40,000-pound sled, we’re sure it can tow just fine.
You may think Matt’s truck is just another Dodge Ram 3500 with a stack, but you’re wrong. It’s a monster puller with nearly 800 hp that’s ready to hook to the sled, fly down the dragstrip, and accomplish just about anything else Matt dreams up. View Photo Gallery | 19 Photos
Photo 4/19   |   The big trick is the turbocharger, which has a T3 exhaust flange and 4-inch downpipe. The compressor, however, is 68mm, which gives the 5.9L Cummins engine a huge boost in power compared to the stock turbo. 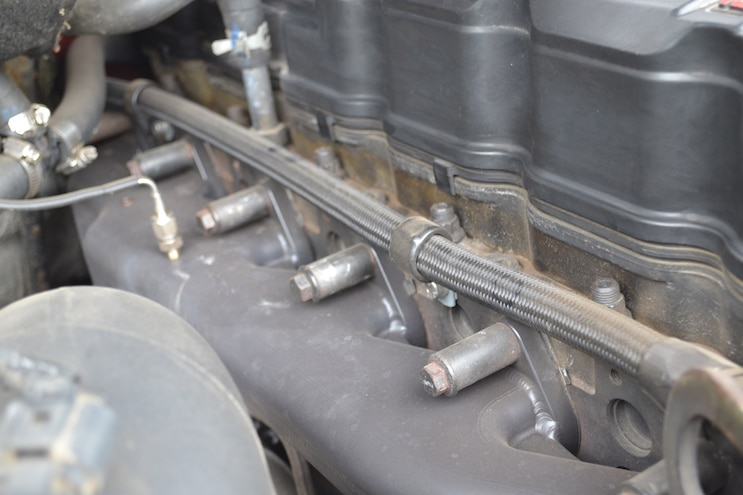 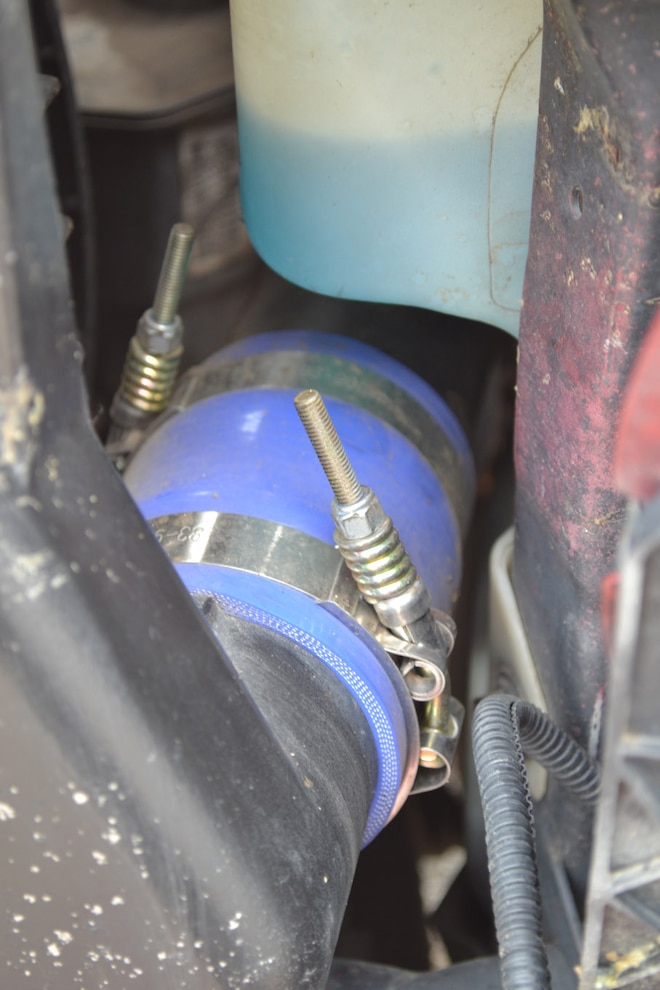 View Photo Gallery | 19 Photos
Photo 6/19   |   With a turbo capable of sending more than 50 psi of boost to the engine, using stock ducting is not a good strategy. Matt replaced the original pipes with upgraded boots and such from BD Diesel Performance. 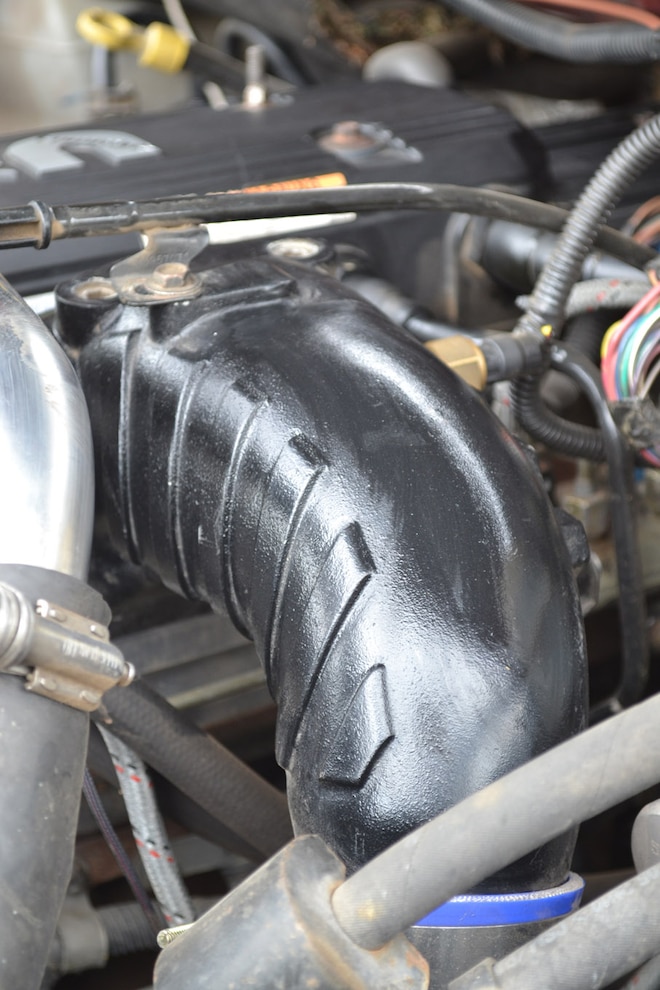 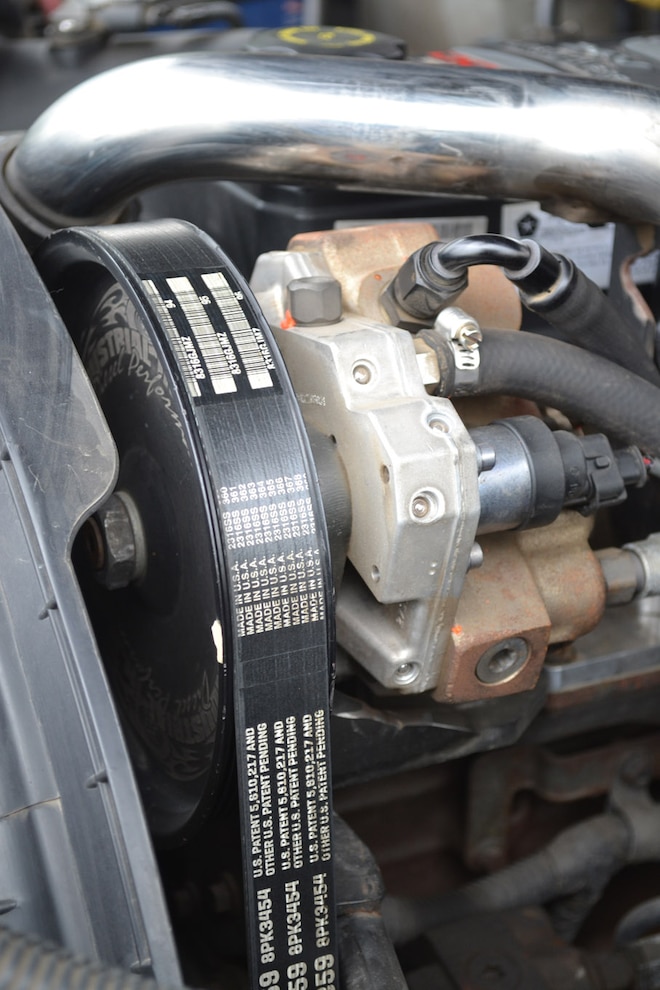 View Photo Gallery | 19 Photos
Photo 8/19   |   With custom tuning and a second injection pump, Matt’s rig has all the fuel it needs— especially for a stock(ish) turbo class. 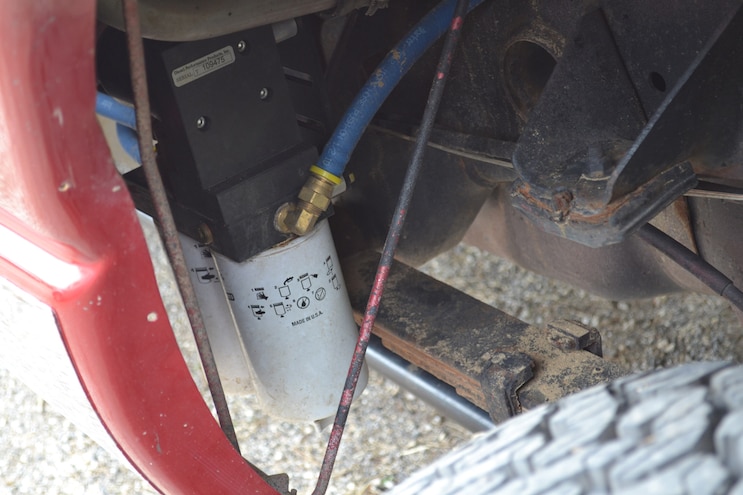 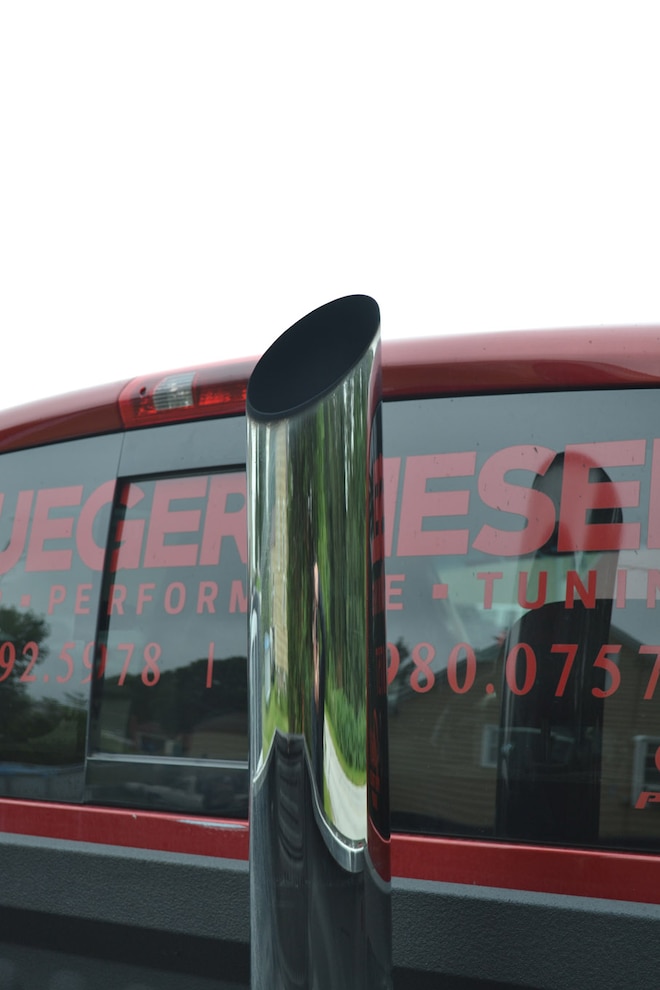 View Photo Gallery | 19 Photos
Photo 10/19   |   The exhaust system is very simple, with a 4-inch straight pipe from the turbo back, exiting into a 7-inch chrome stack. 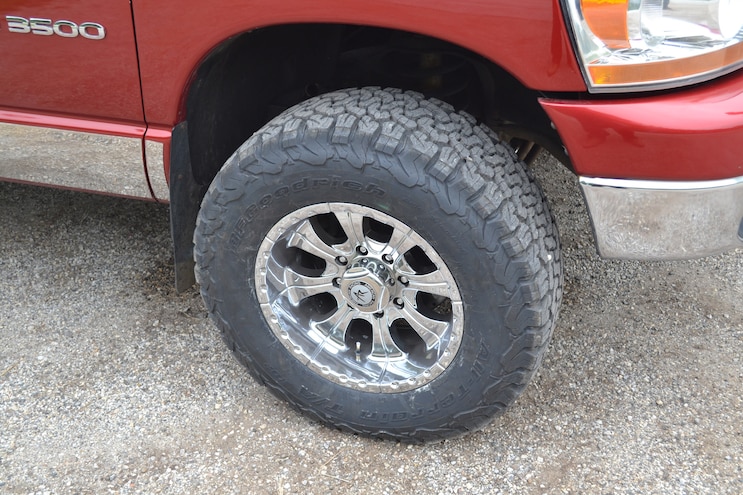 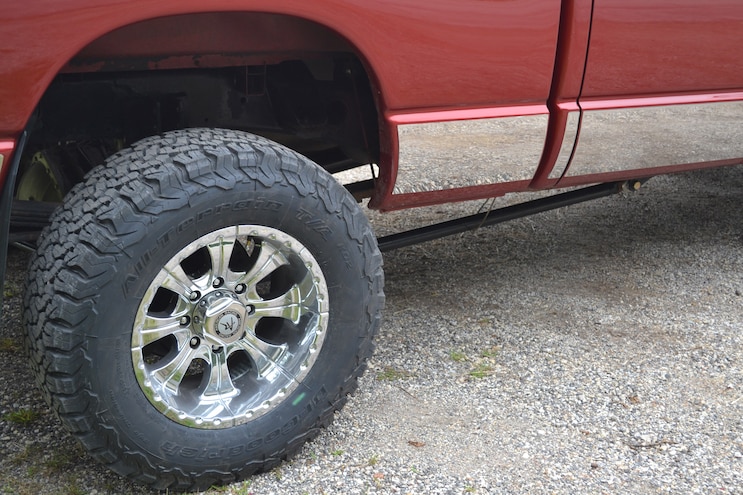 View Photo Gallery | 19 Photos
Photo 12/19   |   Traction bars from Longhorn Fab Shop keep the rear axle from twisting under the engine’s immense torque. The small cables are a safety feature to keep the bars from hitting the ground in the event one of the mounts breaks. 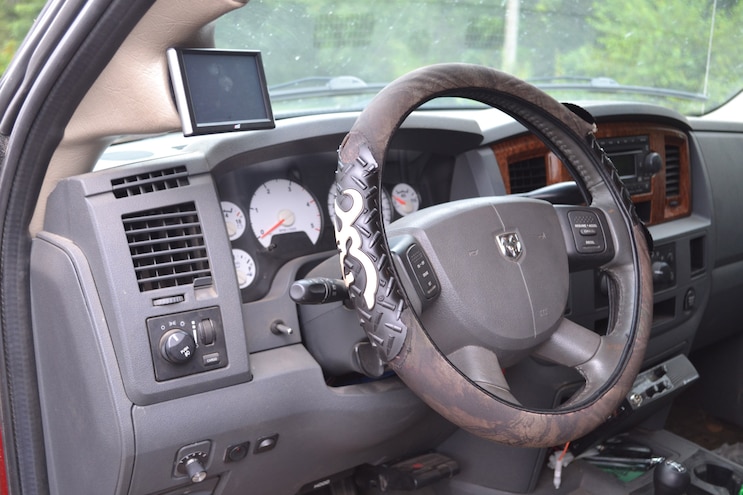 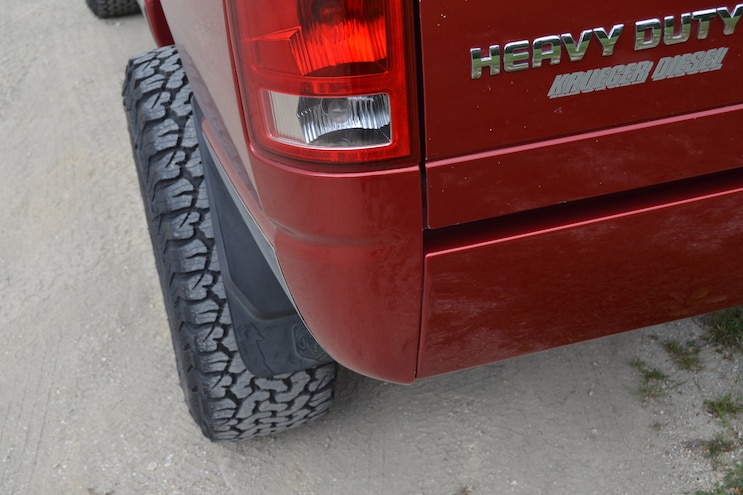 View Photo Gallery | 19 Photos
Photo 14/19   |   A ton of work went into solidifying the rearend of Matt’s ’06 Dodge Ram 3500. The 4.10 gears are stock, but the rearend is heavily braced and upgraded with 4340 axles from Yukon Gear & Axle. The housing also features an LPW Racing Products gear cover that is tied into the chassis and hitch assembly. 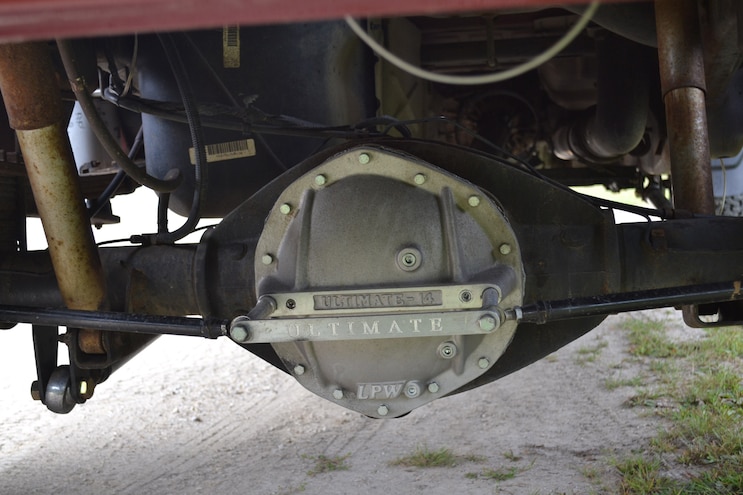