The One That Always Comes Back 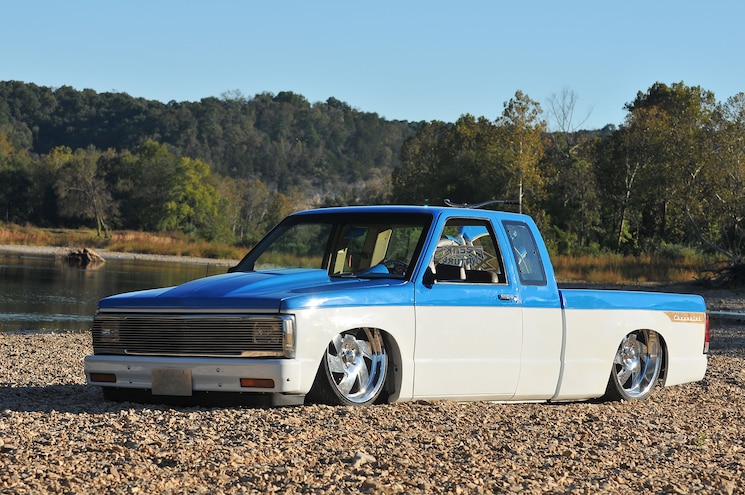 According to an old adage, if you love something, set it free; if it comes back, it was meant to be. This is the story of Orphan, a Chevy S-10 that was passed around because nobody wanted it until it was on the brink of being destroyed. Adam Edwards of Bald Knob, Arkansas, grew up loving automobiles. He would sit in his living room and line up all his Hot Wheels cars and trucks as if they were at a car lot. “On occasion, I would take a hammer to some of them, and then put them back together,” Adam tells Truckin. “It was like I was a mechanic at five years old.” 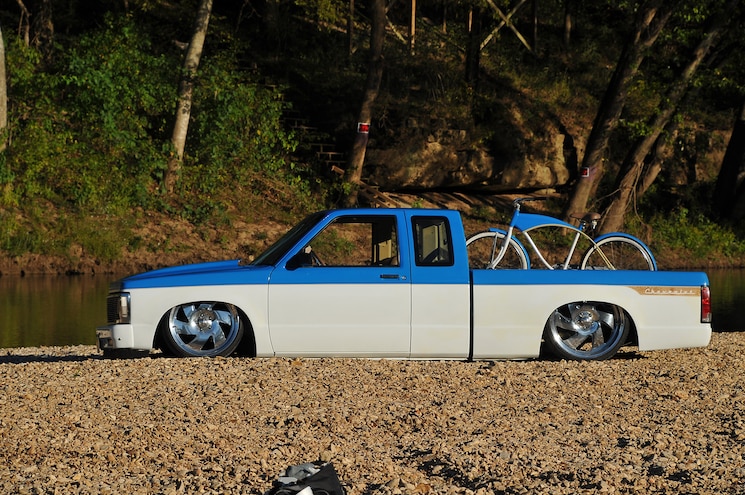 View Photo Gallery | 11 Photos
Photo 2/11   |   1993 Chevrolet S10 The Orphan Side View
Once Adam got to high school, he began taking automotive classes. In college, he took auto body courses. In 2010, Adam had the opportunity to purchase a mini-truck he had seen in the neighborhood. Originally, he had no interest, but once he heard it had been ’bagged, his interest was piqued. Of course, once Adam took possession, it had no air suspension, but the bed had been cut for a triangle-notch, and the truck had drop spindles and a mono-leaf. Adam had some air equipment in his garage, so he and some friends decided to finish the job. 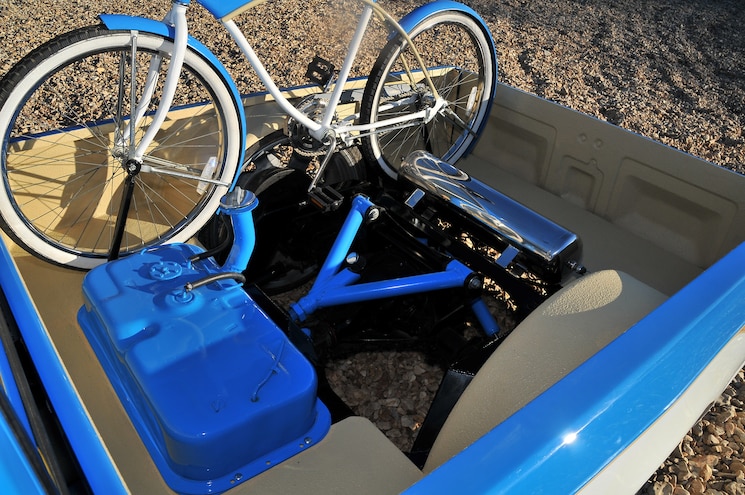 View Photo Gallery | 11 Photos
Photo 3/11   |   1993 Chevrolet S10 The Orphan Bed Bike
Adam traded the Chevy to his friend Dustin for a lifted 4x4 and, as fate would have it, two weeks later, Dustin traded it back to Adam. The truck sat for about nine months until Adam once again traded the S-10 to his friend Devin for a low-mileage Dodge he was able to flip easily. Six months later, Devin wanted a truck Adam had purchased, and the Chevy S-10 once again came back home. Adam decided to body drop it to boost its appeal, and he was able to sell it to his friend Cody. 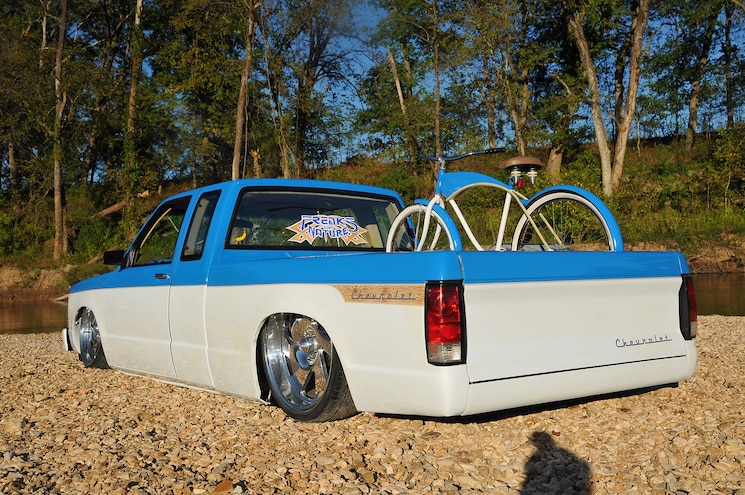 View Photo Gallery | 11 Photos
Photo 4/11   |   1993 Chevrolet S10 The Orphan Rear 3q
Cody had the mini-truck for about a year, and Adam heard he wasn’t taking care of it. By this time, Adam had become concerned about the passed-around Chevy, so, for the final time, he made a trade to get it back. When he went to pick it up, it was in horrible condition. “It was in a bazillion pieces and grass was growing over the front grille,” Adam says. “It looked like the fenders and hood were dragged down a gravel road.” The Chevy was loaded up along with all its parts and brought back to Adam’s garage for its final build. 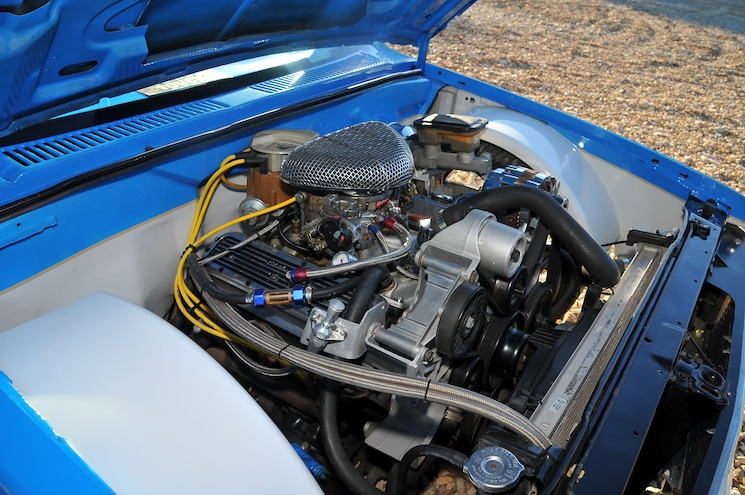 View Photo Gallery | 11 Photos
Photo 5/11   |   1993 Chevrolet S10 The Orphan Engine
At the insistence of his wife, Courtney, Adam began rebuilding his Chevy by adding a new motor, shaving all the extraneous items, tightening the loose ends, and painting and assembling the body. Utilizing his knowledge of auto repair, Adam was able to handle the majority of work by himself with the help of his wife. Once the truck was complete, Courtney decided she wanted to build a bike to match the Chevy, and they were able to make a bracket in the bed to hold it.
The Orphan has been through various owners and many stages of its life, but none more important than its final one. Adam and his wife not only brought their Chevy back from the dead, they created a killer ride they can enjoy as a family. Adam wants to give a special thanks to Courtney for keeping him motivated and working alongside him to finish The Orphan. 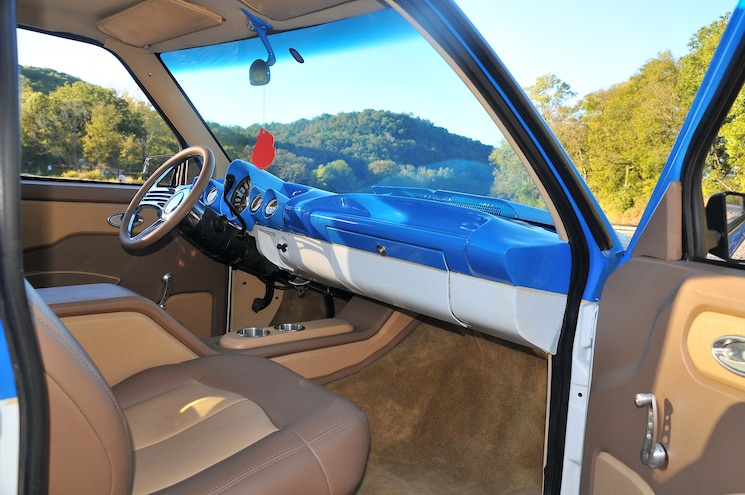