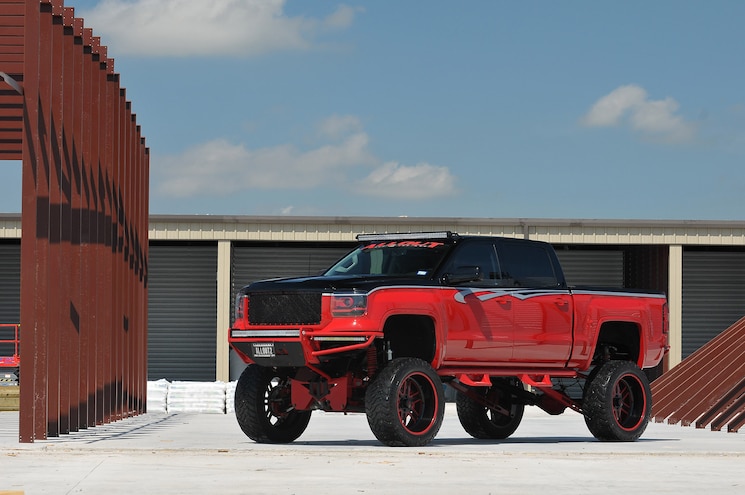 Since its introduction, the Sierra has continuously helped General Motors remain one of the best-selling American truck brands. The Sierra is often seen as the luxury version of the Silverado workhorse, although the two trucks are almost identical. And many people consider the front-end design to be superior to that of the Chevy. When it came time for Chance Kamp of Allout Offroad to choose the perfect vehicle to show off his team’s talent, he chose a brand-new GMC Sierra 1500. 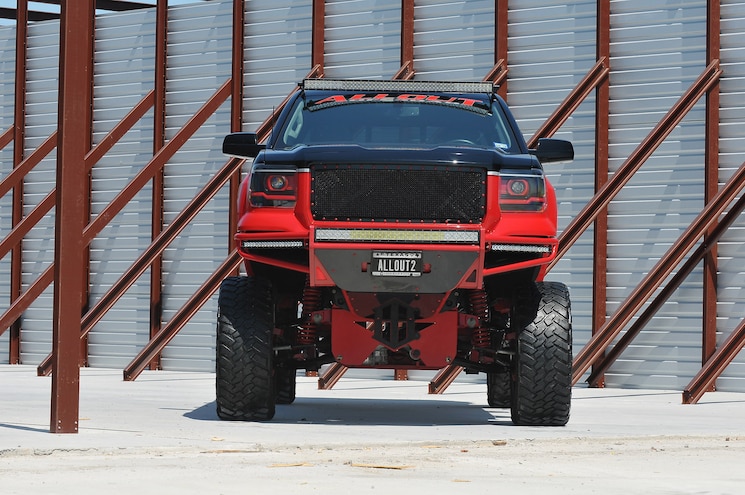 View Photo Gallery | 15 Photos
Photo 2/15   |   2014 GMC Sierra 1500 Timeless Front
Having a new stock truck won’t cut it around the shop, so Chace started at the top. The first stop straight from the dealership was Armando’s Paint and Body in Rosenberg, Texas. With only 50 miles on his new GMC, he trusted Armando with the key ingredient of standing out among all the other trucks. Chance has a pattern with his vehicles being some variation of red and black, so the choice was easy on the color mixture. Pat Maxwell of Maxwell Auto Design in Spring, Texas, added some separation of the colors with his eye-catching graphics. 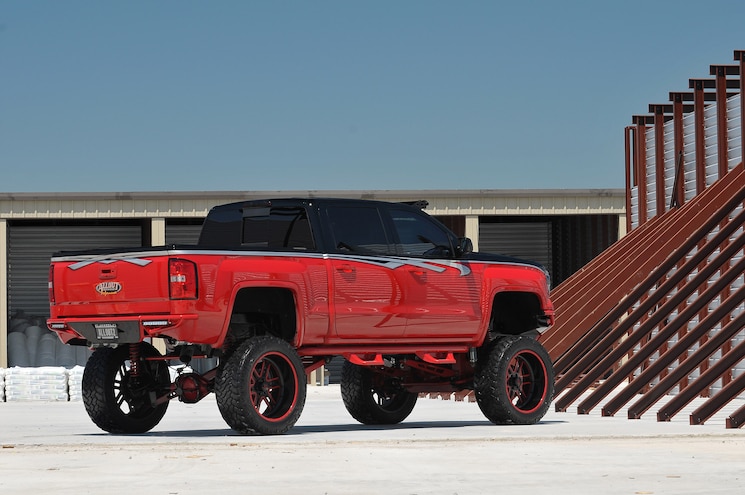 View Photo Gallery | 15 Photos
Photo 3/15   |   2014 GMC Sierra 1500 Timeless Rear
Because you can’t have a custom build sitting at stock height, the next step was to alter the suspension. It was fortunate that the hardworking men and women at Allout Offroad were extremely in helpful in stripping the stock suspension off the Sierra. Michael Benedict took the reins by removing all the factory suspension components, fuel lines, fuel tank, brake lines, and electrical from the frame to prep it for modifications. Once all the cutting and reinforcements were finished, Michael proceeded to strip the frame of all the dreaded GM undercoating using heat, a truckload of rags, and cases of brake cleaner. Armando was brought back in to completely coat the underside in the red and black PPG paint. After enough cure time, Michael installed the 3rd Coast 14-to-16-inch suspension lift, Fox 2.5-inch coilovers with reservoirs, and rear four-link coil conversion. Once all the components were fitted, welded, and installed to satisfaction, all components and axles were sent out for powdercoating and paint. While waiting for the return of the suspension and axles, the GMC was fitted with the Nfab front and rear tube-style bumpers. 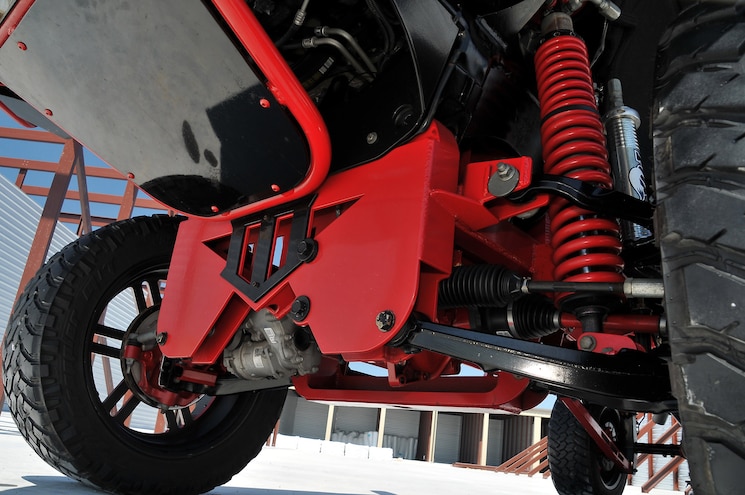 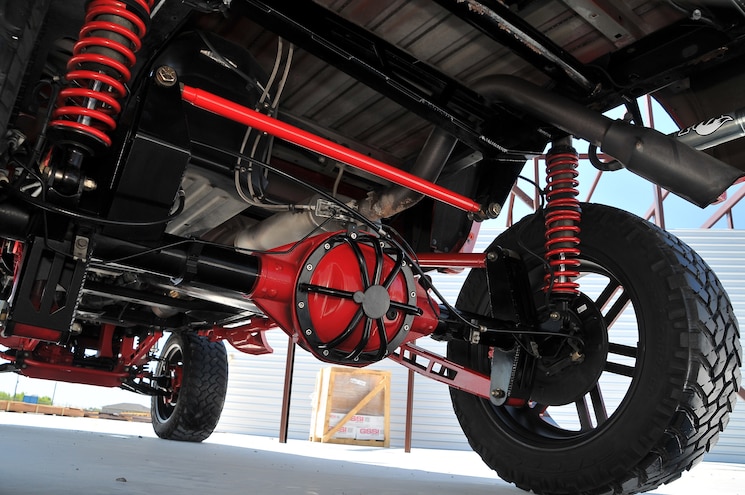 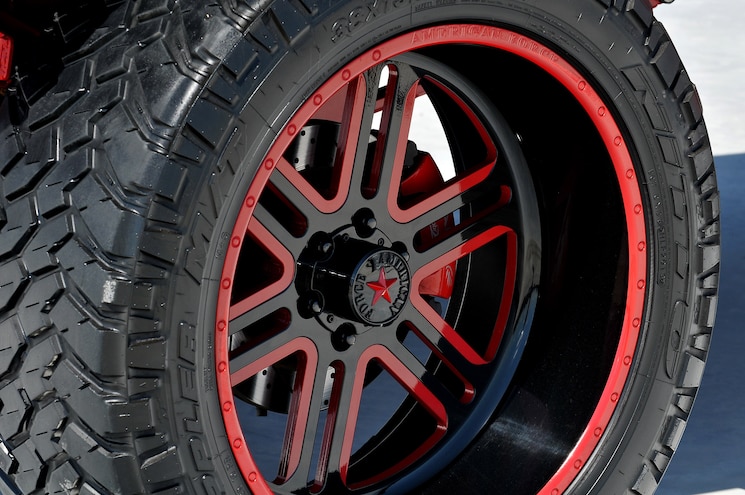 View Photo Gallery | 15 Photos
Photo 6/15   |   2014 GMC Sierra 1500 Timeless Wheel
The truck was reassembled one last time, with attention paid to the smallest of details for a substantially cleaner look. To finish off the install, Michael added a Magnuson supercharger, 4.56 gears, and a set of oversized Baer Brake calipers and rotors on all four corners to make sure it will stop as well as accelerate. The Sierra was brought to Lee’s World Audio for interior paint accents and a full stereo system. Once at Lee’s World, the interior was gutted to make way for the sound-deadening material on the floor, roof, and all four doors to ensure a nice, quiet ride. With the interior out, miscellaneous interior pieces were then sent for color-match painting. All the power and audio cables were fed to the JL Audio amps, subs, and door speakers. Lee built the subwoofer enclosure, mounted it under the backseat, and wrapped it in vinyl. He also added an electronic-actuated amplifier drawer into the sliding box. Since the stock head unit was to be retained, an Audison Bit Ten DSP was added to clean up the signals to the amps for a crisp, clean sound. 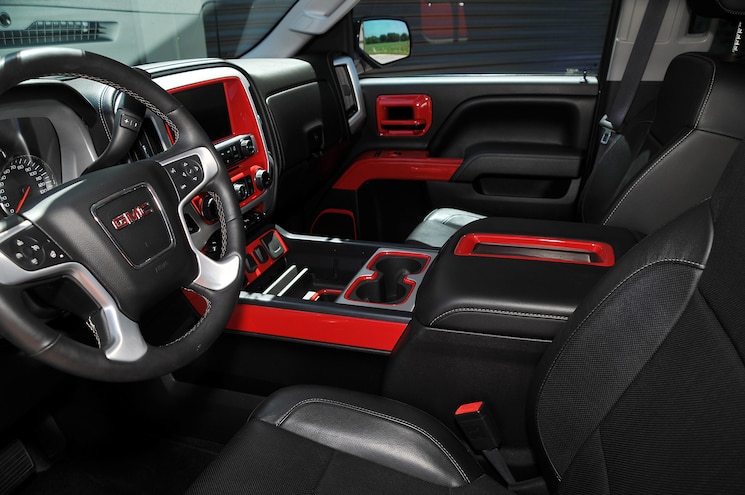 View Photo Gallery | 15 Photos
Photo 7/15   |   2014 GMC Sierra 1500 Timeless Interior
Chance was proud to show his completed and flawless GMC Sierra in the N-Fab booth in a feature spot at SEMA. Since then, the Sierra has been the pride in his fleet of red and black trucks. Chance wishes to thank his dedicated crew at Allout, including shop manager Mike Benedict for creating such a solid and durable truck capable of handling anything. The Timeless build was done so well that even cruising to work daily through the busy streets of Houston, it’s as flawless today as when it was designed.