Zach Kurth of Zimmerman, Minnesota, is a truck fan. He has owned a lot of vehicles with beds—everything from rat rods to mega-dollar show trucks. “I have a ’93 Chevy that has a ProCharger supercharger and runs on E85 fuel,” Zach says. “It’s fun for about the first few miles, but that’s it, and filling up every 40 miles gets old, too.” He needed a truck that could be fun as well as useful, so he made the natural switch—from gas to diesel power!
The ride Zach selected for his build is a standard-cab ’16 Chevrolet Silverado 2500HD. Zach liked the rig’s exterior styling but not the interior, so his first modification was replacing the stock cloth bench seat with a full front interior from a Silverado LTZ. “I decided every modification needed to make the truck better but also have utility,” he explains.
With a sold theory for the build, Zach upgraded the suspension with ride quality in mind. The front end is lifted by a set of torsion keys and control arms from Cognito Motorsports, as well as shocks from Fox Factory. The rear features soft Fox shocks, complemented by a Kelderman air-suspension kit. The result is a leveled truck that sits about 3 inches higher than stock and rides like a dream. 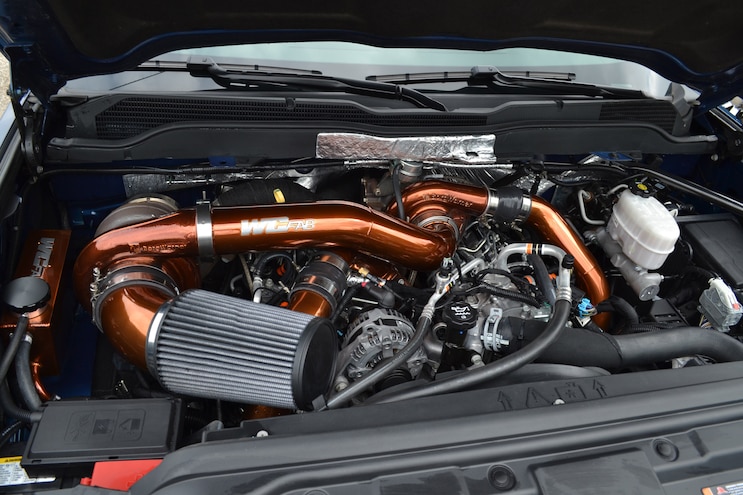 View Photo Gallery | 21 Photos
Photo 2/21   |   The Wehrli Custom Fabrication compound-turbocharger setup is the centerpiece of a very clean engine bay. Although there are air and fuel modifications, the 6.6L Duramax LML long-block remains factory original. Not bad for an engine that can make double the stock power!
Considering Zach’s stable of powerful vehicles, there was no way his ’16 was going to be stock in the engine department. Again, he took the reliable-yet-better approach to building the 6.6L Duramax LML, relying on the skills of buddy Dillon Johnson at Northern Diesel Performance for assembling the powerplant. Zach put airflow first, installing a compound-turbocharger kit from Wehrli Custom Fabrication that features 80mm and 64.5mm BorgWarner turbos. The fueling side is also upgraded, with 40-percent-over injectors, a Wehrli 10mm CP3 injection-pump conversion (replacing the problematic stock CP4.2), and a FASS Fuel Systems 165-gph lift pump. NDP also rebuilt the Allison 1000 six-speed automatic transmission using a Goerend transmission kit and torque converter, which is upgraded to an X-spec triple disc. 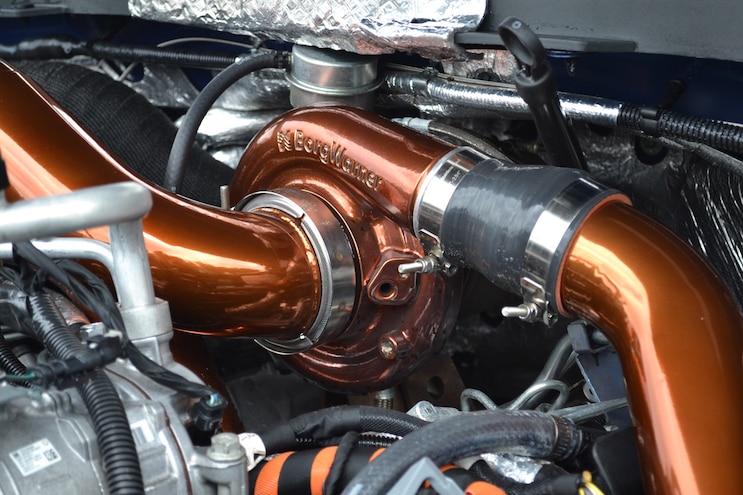 View Photo Gallery | 21 Photos
Photo 3/21   |   The original turbo was replaced by a 64.5mm BorgWarner S300 ’charger, which spools very quickly. Zach reports it’s “just as responsive as stock, but with more power.”
When Zach finished his build, he only had one reaction: This is great! “The truck can keep up with my Corvette, and I don’t have to fill up literally every 40 miles. I can now go hundreds at the same power level—with a trailer,” Zach says. “You always hear about how diesels are the best of both worlds, but you never realize how useful they are until you own one.” Despite making 700 hp, the truck isn’t all fun and games. “We’ve gone to Canada in it, towed huge trailers, taken 5,000-mile road trips, you name it,” he adds. “One thing is for sure, when you build a modified diesel, you’ll never look back.”
We couldn’t have said it better. 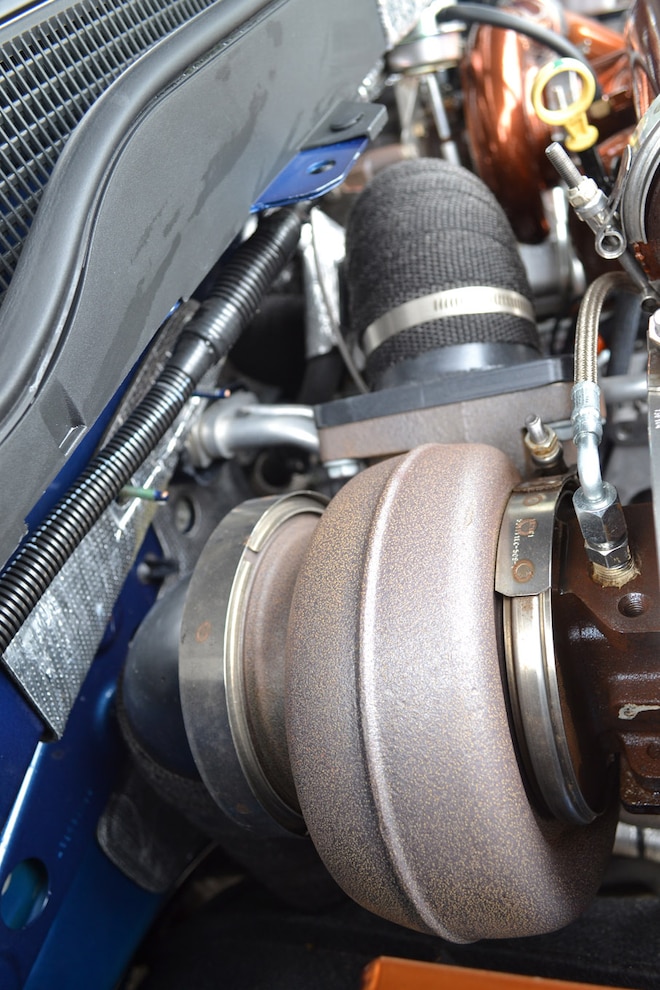 View Photo Gallery | 21 Photos
Photo 4/21   |   Cramming two turbos into an engine bay designed for one can create space issues. Luckily, there is still enough room for a 4-inch downpipe from the turbo back, allowing the exhaust to flow as freely as possible. 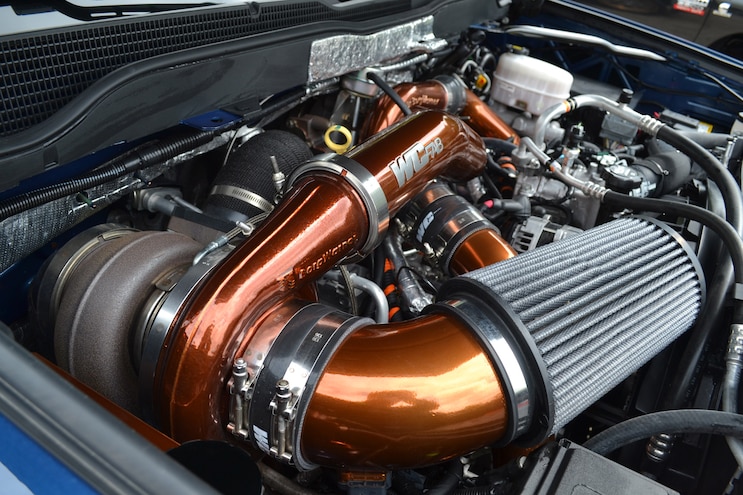 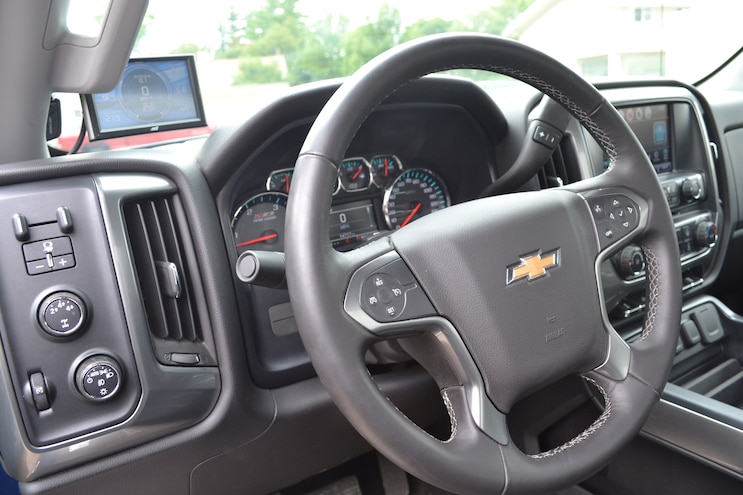 View Photo Gallery | 21 Photos
Photo 6/21   |   The stock Chevrolet dash setup is fine for Zach. Extra gauges, in the form of an Edge Products Insight CTS2 monitor, are the only addition to the truck’s instrumentation. 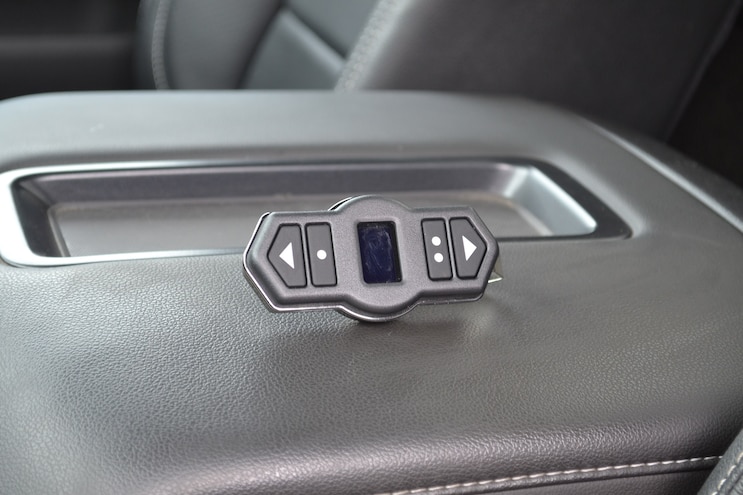 View Photo Gallery | 21 Photos
Photo 7/21   |   Cloth seats don’t cut it for Zach, who likes the regular cab’s styling but not the lack of options. Cooled and heated leather seats (from a crew cab Silverado LTZ) provide maximum comfort to Zach and his passengers. 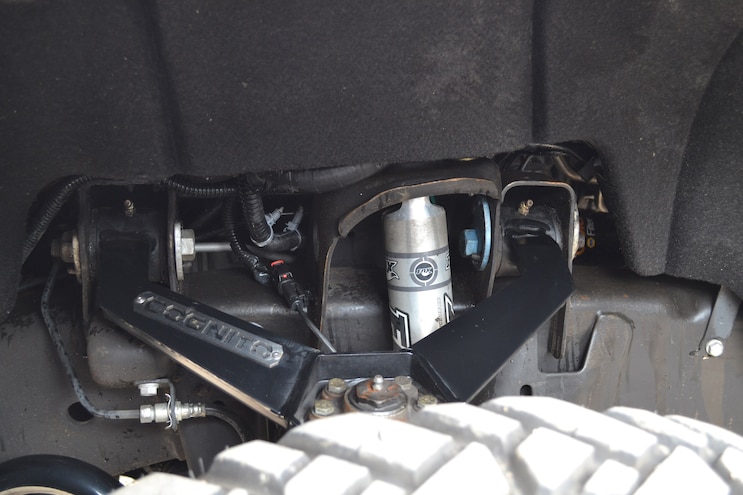 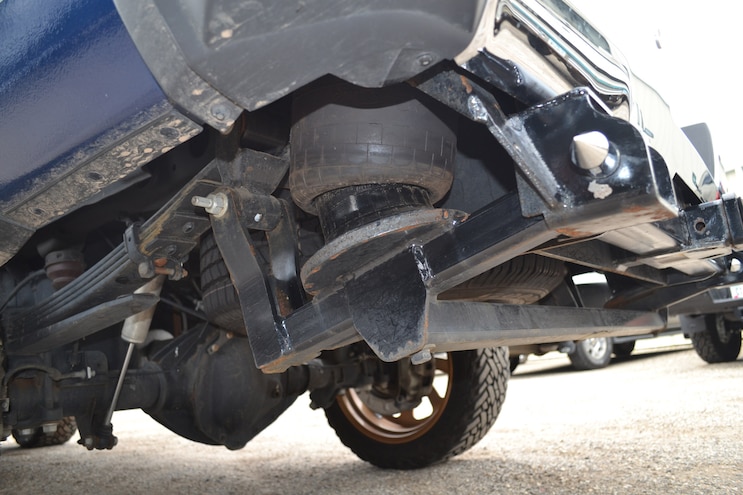 View Photo Gallery | 21 Photos
Photo 9/21   |   Taking a look beneath the rear of the rig reveals its Kelderman air-suspension setup, which replaces the rear spring hangers with an integrated trailing arm/airbag/hitch combination that provides an excellent ride with and without a trailer. 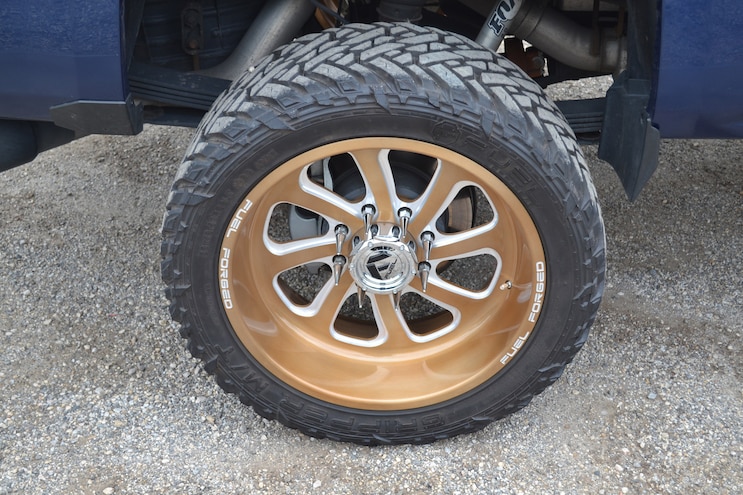 View Photo Gallery | 21 Photos
Photo 10/21   |   In our opinion, Zach hit a home run with the beautiful gold wheels and blue paint combination. The wheels are 22 inches in diameter and are made by Fuel Off-Road. 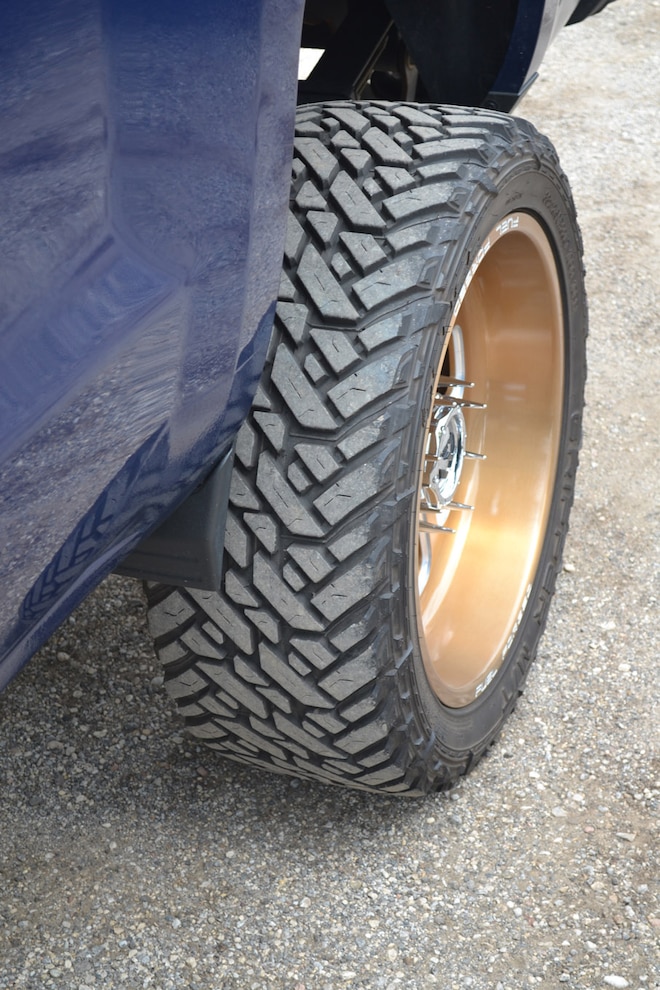 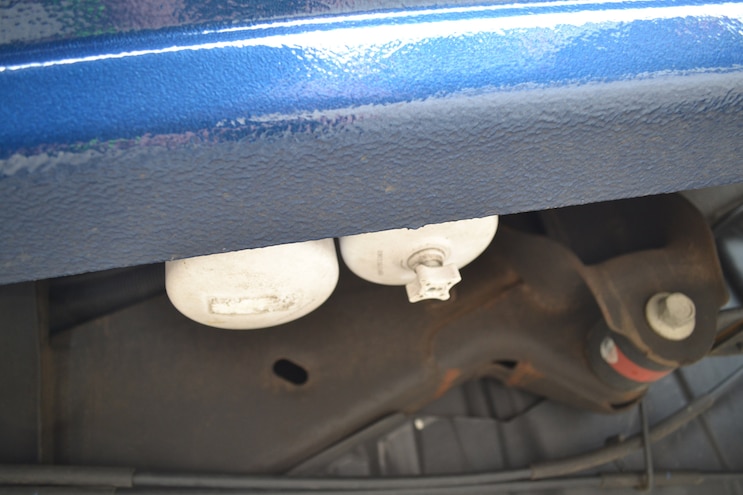 View Photo Gallery | 21 Photos
Photo 12/21   |   Almost all newer diesels can benefit from a lift pump, and, with larger injectors, it is a must for Zach’s truck. A simple FASS Fuel Systems 165-gph pump feeds a transplanted CP3 injection pump, replacing the original CP4.2. 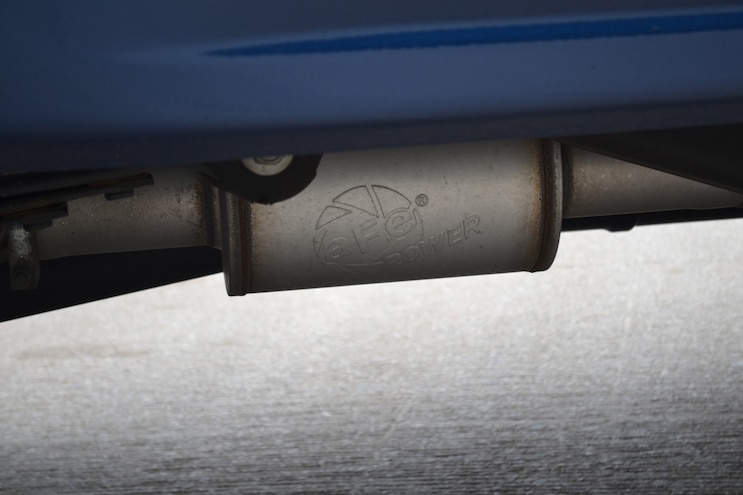 View Photo Gallery | 21 Photos
Photo 13/21   |   There’s no straight pipe on Zach’s rig. Instead, the 4-inch tubing feeds into an AFE Power muffler that provides a throaty yet quiet exhaust note. 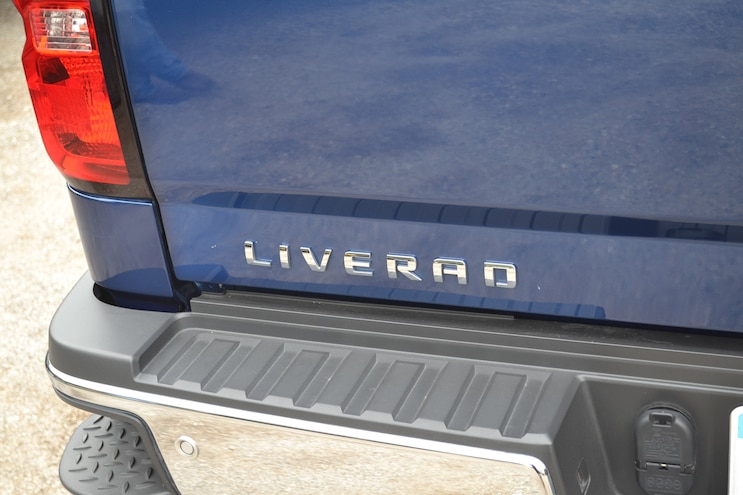 View Photo Gallery | 21 Photos
Photo 14/21   |   Zach isn’t one to miss out on having a little fun with his sleeper truck, as the emblems “LIVERAD” and “TTLT” replace the normal Silverado badges. 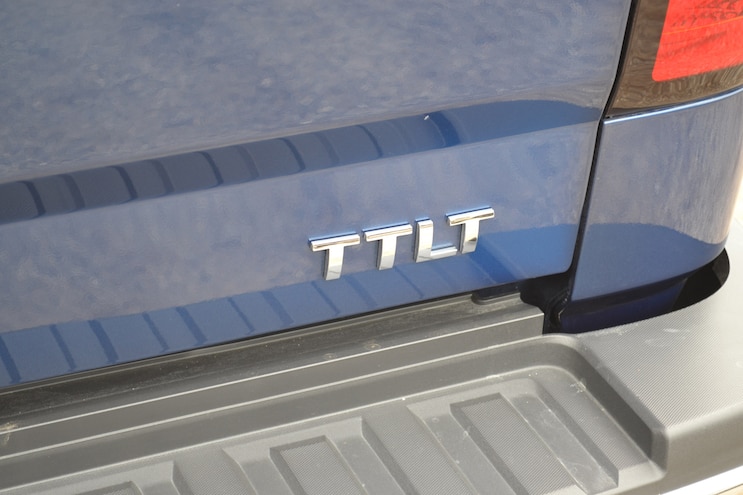