Adventure in the Tetons: 2019 Nissan Titan and Titan XD 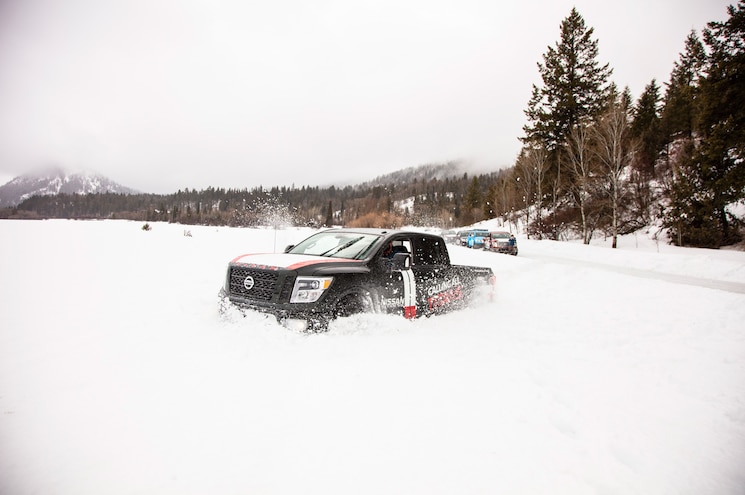 Look, let’s be honest here. The Nissan Titan and Titan XD will probably never sell in the volumes that their domestic competition enjoys, and the automaker is frank about that. There are lots of reasons for this: limited cab and bed configurations, only two engine choices, and a relative lack of experience in the fullsize truck space (the Nissan Titan was first introduced in the 2004 model year).
Some might also see a smallish enthusiast following as a reason for the Titan’s middling sales numbers. However, if what we experienced in the mountains around Jackson Hole, Wyoming, is any indication, that last point is a bold-faced lie. Titan owners are not only in love with their trucks, but they’re borderline evangelical in telling their friends how much and why they appreciate the Nissan brand. Keen to celebrate their loyalty, Nissan invited a handful of its most passionate Titan owners to come to Wyoming and learn what their trucks could do when faced with one of the most severe winters the region has ever seen. 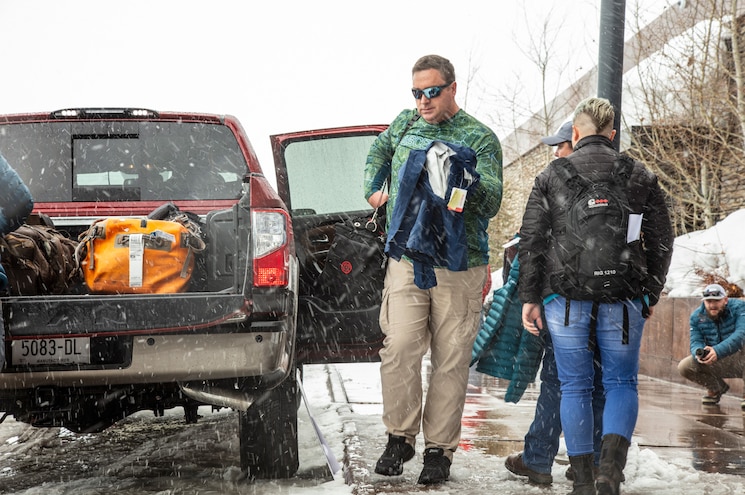 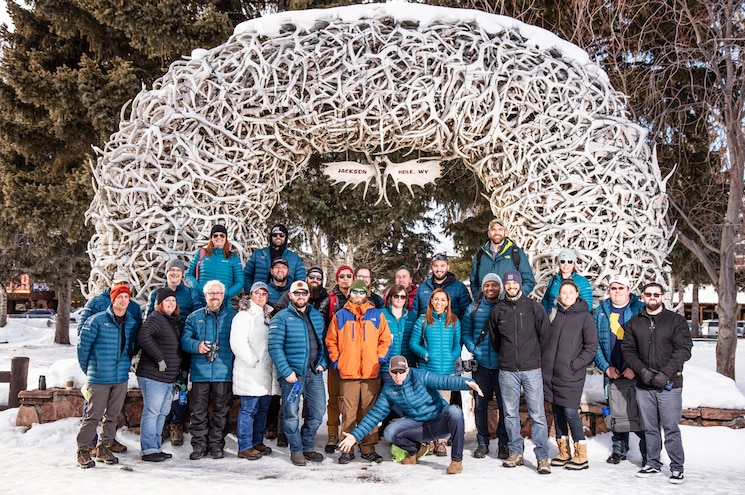 Put to Task in the Ice and Snow

The weather we faced in Jackson Hole and nearby Victor, Idaho, could alternately be described as a Winter Wonderland or a Class 3 Killstorm, depending on how much you appreciate snow. Because snow it most certainly did. In the week leading up to Titan Adventure, the Teton Range saw snow accumulation exceeding 6 feet, and Mother Nature sent at least another 8-10 inches or so in the three days we were in the area. To make matters more interesting, ambient temperatures hovered just above freezing, meaning the accumulation on the pavement turned into slush almost immediately, before freezing into sheets of bumpy ice overnight. Of course, this meant there was plenty of opportunity for us to learn how to use the Titan effectively in terrible conditions. 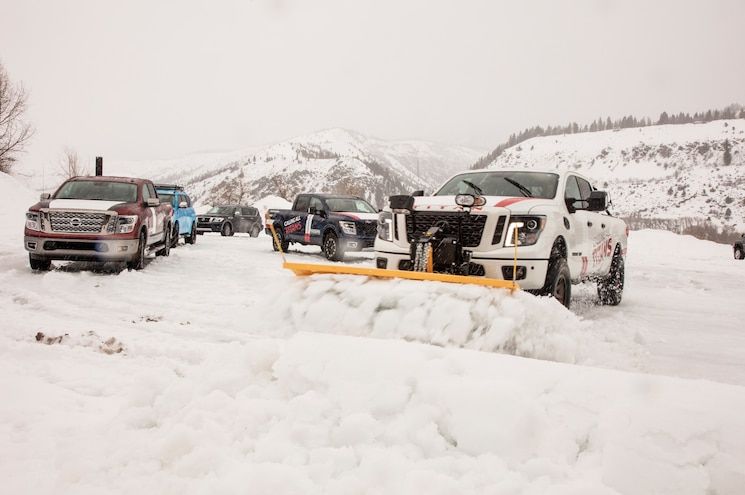 View Photo Gallery | 74 Photos
Photo 4/74   |   Nissan Titan Adventure Snowplow 2019 Nissan Titan Front Quarter 01
Nissan is rightly proud of the fact that the majority of its owners place value on giving back to the community, frequently using their Titans to do so—the last bit is a key part of the company’s Calling All Titans charity campaign. As such, we spent much of our time on the first day in Idaho learning how to knuckle down and do some wintertime work. First on the docket was learning how to plow a parking lot. Using Fluid Peak Collective’s 2018 Nissan Titan XD and Meyer Lot Pro snowplow, we learned how to manipulate the snow to leave clean pavement behind, pass after pass. While we weren’t very good at it (plowing takes practice, and we didn’t have enough time to perfect the art), it was nonetheless eye-opening to see how the Titan XD’s sturdy, fully boxed frame and 555 lb-ft of torque helped it tackle the job. 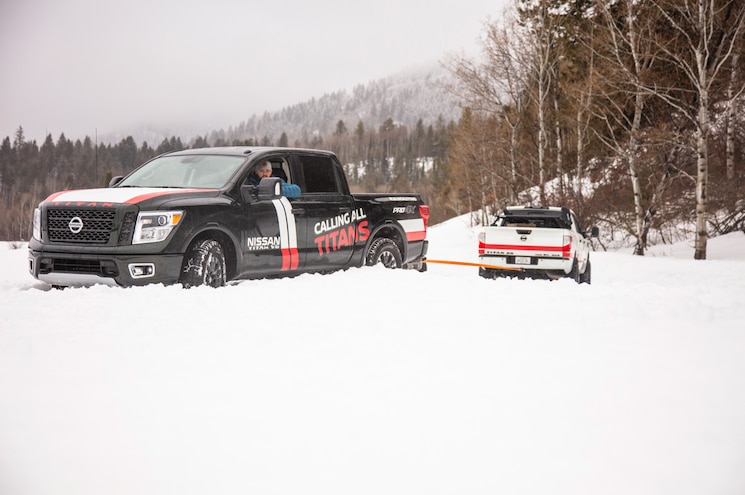 View Photo Gallery | 74 Photos
Photo 8/74   |   Nissan Titan Adventure Recovery 2019 Nissan Titan Fornt Quarter 04
Next up was a common good-deed opportunity truck owners face in the winter—freeing a stuck motorist. However, a good bit of play preceded this bit of hard work, as we had to get one of the Titans deliberately stuck in the snow. Of course, that meant driving the truck as fast as we could on the slick, closed road before plowing headlong into the powder, then gunning it to get the tires to dig us deep into the snow. Sure enough, after a few tries, we were able to bury the 1/2-ton Titan PRO-4X to its frame rails, wheels spinning in deep ruts with no chance of getting out on its own.
We allowed the truck to settle into the snow while Fluid Peak Collective’s David Page gave us a quick lesson on vehicle recovery. One common mistake folks make, according to Page, is using a standard tie-down for recovery, rather than a kinetic rope that is able to stretch and absorb some of the stress of tugging. A static rope is liable to cause damage to either the recovery truck or the vehicle it’s trying to un-stick. 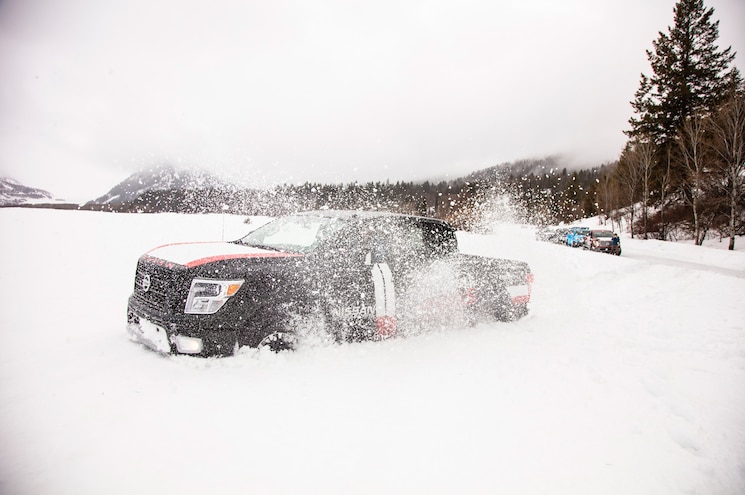 View Photo Gallery | 74 Photos
Photo 15/74   |   Nissan Titan Adventure Recovery 2019 Nissan Titan Front Quarter 02
Page also advocated for closed-loop recovery, which ditches a hook in favor of a pin and D-ring. A hook by definition has an open end, leaving room for error in case the load on the hook shifts or the hook itself breaks. Closed-loop recovery gear, conversely, makes use of a removable pin that allows a rope or cable to be threaded through the D-ring; the pin then screws back into the D-ring to both close it off and spread the tugging forces more uniformly through the ring. 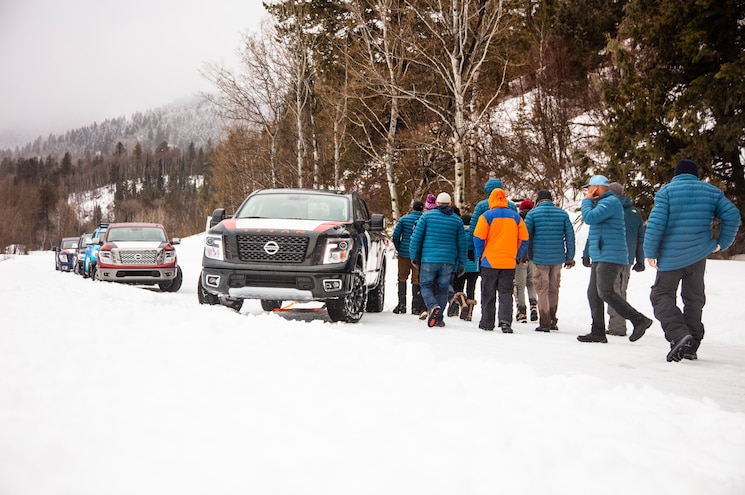 View Photo Gallery | 74 Photos
Photo 16/74   |   Nissan Titan Adventure Recovery 2019 Nissan Titan Front Quarter 03
One of the attendees also taught us a clever trick for those inopportune times that you might need to tow a friend out of a snowbank, but neither of you have those aforementioned D-rings. By removing your trailer hitch, you can thread a kinetic rope into the receiver and secure it using the hitch pin. This recovery method depends heavily on the strength of a hitch pin, examples of which have been known to shear in tough situations. Therefore, it should best be left to emergencies-only use, and better yet, keep your truck stocked with a sturdy set of recovery gear. Page recommends ARB’s Essentials Recovery Kit. With the D-rings, thimbles, and recovery rope set, we tugged at the stuck truck at a speed of about 10 mph, the kinetic rope absorbing some of that snap when it went taut. We had the stuck Titan out with time to spare, so of course we undertook the experiment again. And again. And again.

We’re not going to lie, the next segment of Titan Adventure had very little to do with the truck and a lot to do with kicking up a roostertail of snow and having fun. Nissan, in its infinite wisdom, saw fit to set us up with a fleet of snowmobiles and turned us loose in some of Idaho’s 11,600,000 acres of BLM land. Accompanied by Nissan Titan ambassadors and pro snowmobilers David McClure, Rob Kincaid, and Stephen Clark, we set off from Driggs, Idaho’s Teton Valley Adventures, bound for a river of fresh powder that threaded its way through the trees. 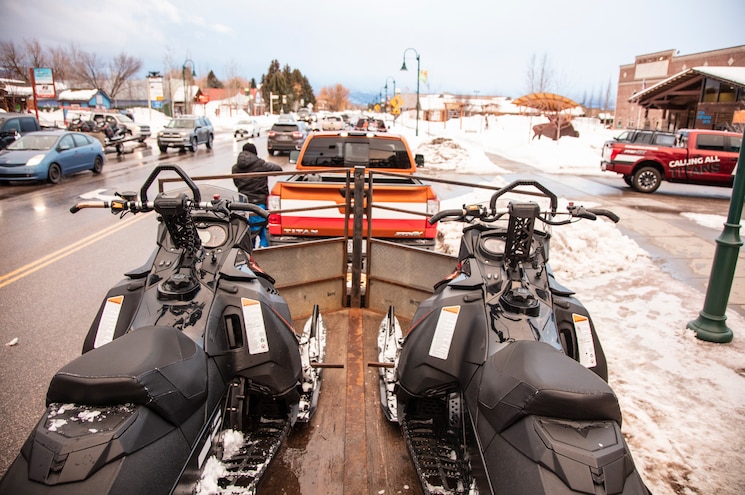 View Photo Gallery | 74 Photos
Photo 17/74   |   Nissan Titan Adventure Snowmobiling 06
Along the way, we passed by wildlife (including one slightly aggressive cow moose) and some of the most scenic vistas the West has to offer. At the top of the trail, we found ourselves in a massive, wide-open flat that gave us ample opportunity to wind out our rented snow machines as fast as we could. And to ensure we left with an appropriate level of humility, our much more professional chaperones then showed us up with the snowmobile-handling skills they’ve honed over decades of sitting behind the handlebars. 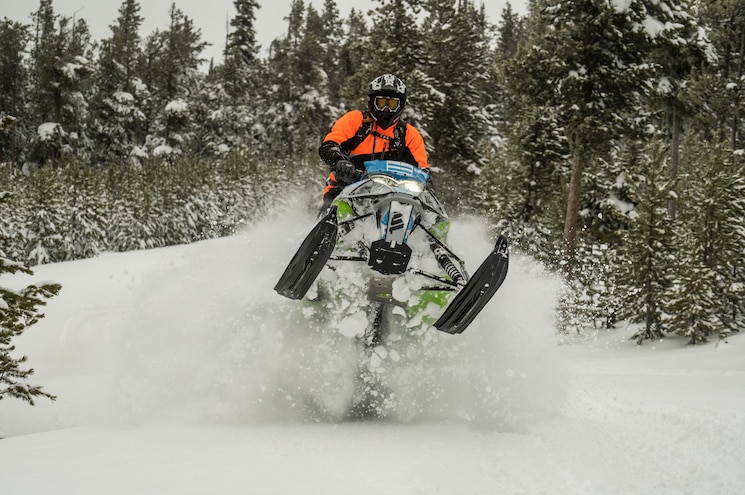 View Photo Gallery | 74 Photos
Photo 18/74   |   Nissan Titan Adventure Snowmobiling 05
Retreating from the trail with toes and fingers chilled, we appreciated our Titan Platinum Reserve’s heated front and rear seats, helping us arrive back to our base camp in Victor refreshed and ready for our evening. After a full day of work and play, we relished Titan ambassador Cory Bahr’s cooking all the more, our bellies full of the professional chef’s Cajun- and creole-inspired flavors, rendered in area-appropriate venison and duck.

Our final day in the Teton area had us headed back into Wyoming for a few hours of sightseeing in the historic city of Jackson. We first embarked on a too-short 3-hour wildlife tour, which included sightings of two rogue coyotes, a family of bison, a lone moose, and even a bald eagle. We also stopped by the Wyoming National Elk Refuge, where two days previous we enjoyed a horse-drawn sleigh ride through the park. Our return had us focused more on bighorn sheep than elk, and again the refuge did not disappoint. Perched high on the butte surrounding the reserve were dozens upon dozens of sheep. 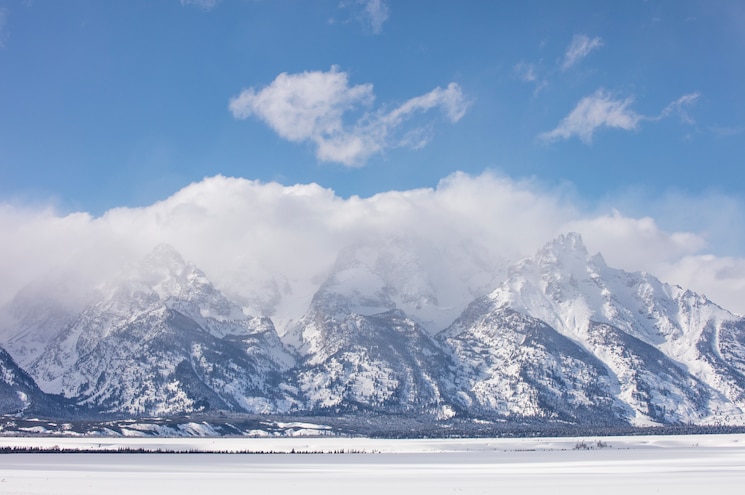 View Photo Gallery | 74 Photos
Photo 22/74   |   Nissan Titan Adventure Teton Mountain Range
Our final stop before heading back was a trip to the three peaks that headline the Teton Range. Grand Teton, the region’s tallest mountain, rises 7,000 feet from the Jackson Hole valley floor, casting a dramatic shadow over its neighbors, Middle Teton and Mount Owen. These crags are some of the youngest mountains in North America, their sharp beauty defined by their age—the older they get, the rounder and softer they’ll become.
Watching sunset fall around the valley and through the mountains, we were filled with a deep appreciation for the wintry beauty the Tetons offer. On and off-road, the fleet of Titans (as well as the Armada Snow Patrol) served as our faithful, surefooted pack animals for the duration of the trip, and at the end of each day, our group of Titan enthusiasts only waxed more poetic in their praise of the vehicles. 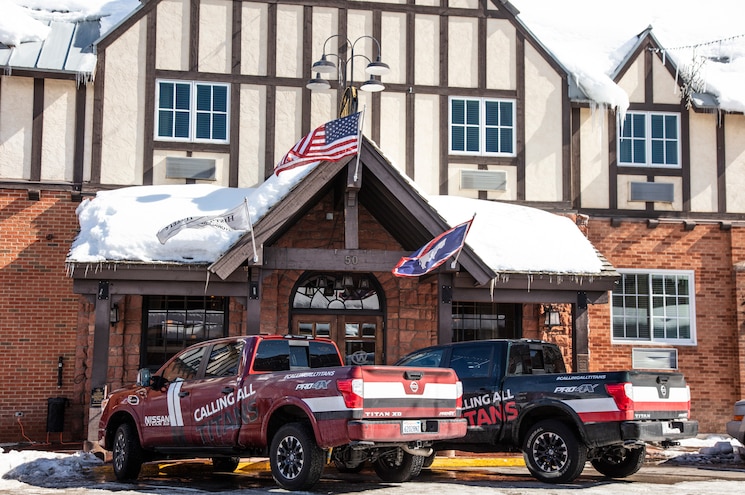 View Photo Gallery | 74 Photos
Photo 26/74   |   Nissan Titan Adventure Jackson Hole 2019 Nissan Titan Xd Rear Quarter
But ultimately, this excursion was less about the truck and more about the experience. Gleefully burying a Titan in the snow and yanking it out, going wide-open on a snowmobile’s throttle, and watching the beauty of nature from afar helped Titan Adventure feel more like a family vacation than a vehicle test. And while we wish it weren’t so, this trip was very likely a once-in-a-lifetime experience, from which we will take only photos and memories. That’s good enough for us.

The world got its first taste of the current-generation Titan XD in 2016, with the light-duty Titan following behind for the 2017 model year. Since then, the trucks have received a little attention from Nissan’s product planners (the Midnight Edition and some incremental trim shuffling, perhaps). 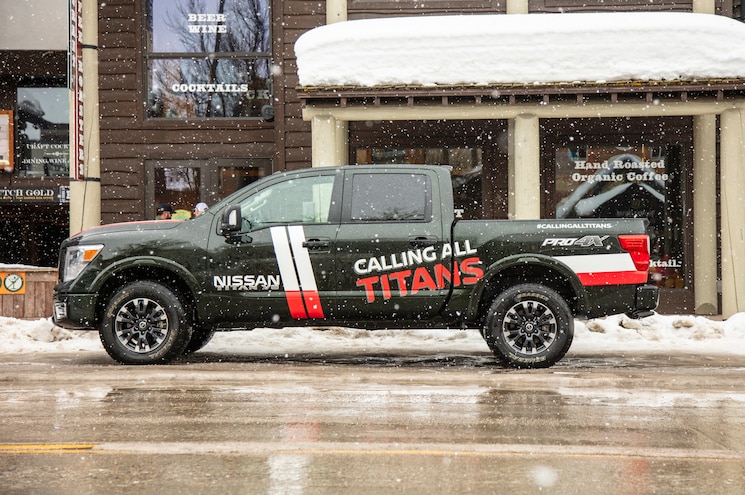 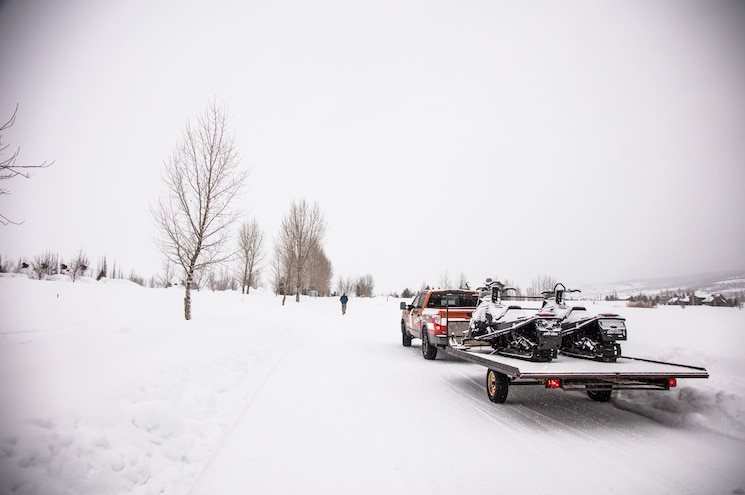 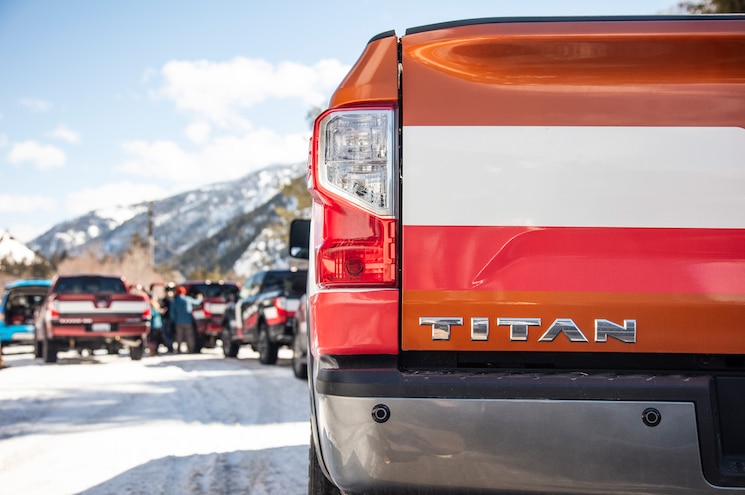 View Photo Gallery | 74 Photos
Photo 29/74   |   Nissan Titan Adventure Jackson Hole 2019 Nissan Titan Rear Badge
While the updates don’t drastically change the driving experience, they do make owning and living with a Titan on a daily basis much easier. The addition of Apple CarPlay and Android Auto are no-brainers in today’s world of connectivity and integration, and the newest NissanConnect touchscreen display is vastly more intuitive than the product it replaces. Unfortunately, we did experience a few hiccups connecting our phones to the new system, but those generally resolved themselves after a few minutes. 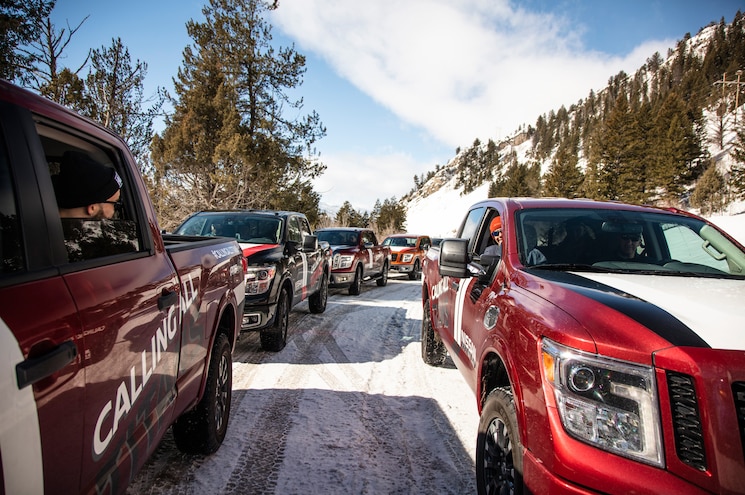 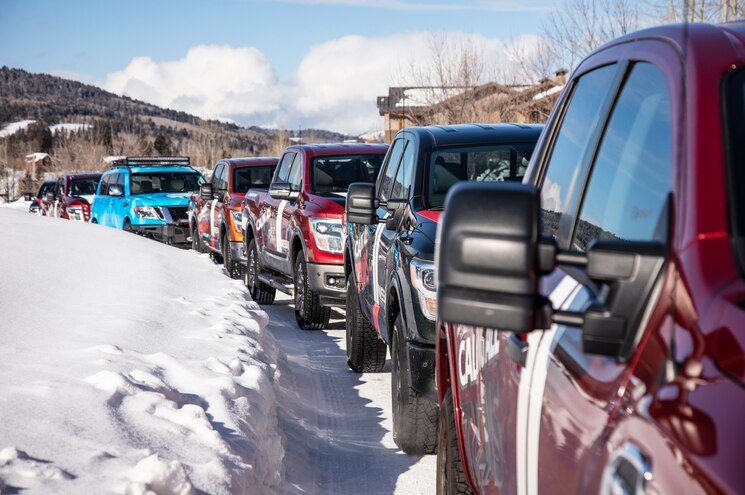