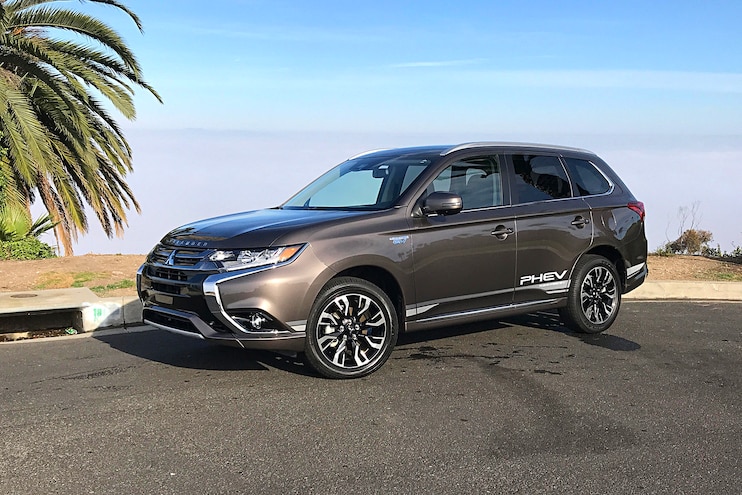 We’re not gonna lie—we’ve been wanting to drive the Mitsubishi Outlander PHEV for a long, long time. Our interest in the plug-in hybrid SUV is based not in desire, but in curiosity, because it’s one of the world’s best-selling plug-in vehicles ever, and we want to know why. Think of this installment of Daily Driven as a science experiment as much as a road test.
Dressed in Quartz Brown and kitted with 285 dollars’ worth of the most 80s-chic rocker-panel decals available today, the Outlander PHEV made a hilarious first impression: “Do you think it’s a plug-in hybrid?” asked one staffer incredulously. And the slightly tacky exterior styling elements followed trend on the interior, with a sea of plasticky “piano black” trim and rickety front seats that felt halfway unbolted. But fully charged and ready to commute home in EV mode, the Outlander PHEV began to win us over. 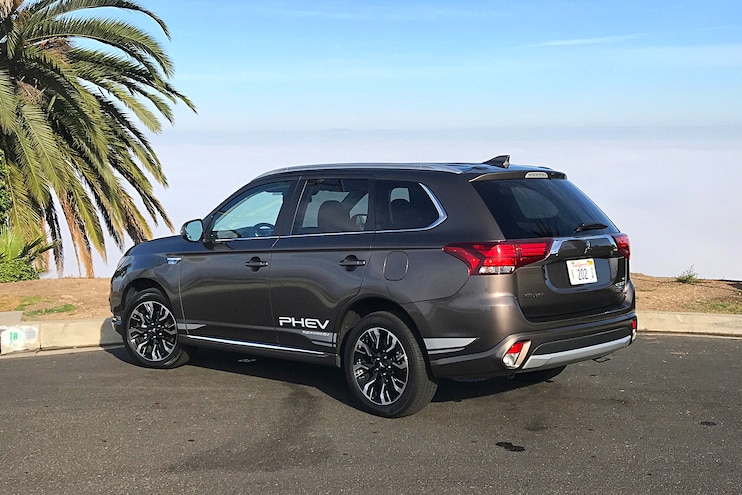 View Photo Gallery | 24 Photos
Photo 2/24   |   Daily Driven 2018 Mitsubishi Outlander PHEV Rear 3q
Silently whirring away from the office, thanks to a single-speed reduction gear transmission, the powertrain’s EV mode offered excellent response and reasonable performance from its front- and rear-mounted 60kW electric motors (all-wheel drive is standard). Like some other PHEVs, the Outlander’s 2.0L gasoline engine normally fires up to serve as a generator, only rarely adding propulsive force to the front wheels. And in EV mode, the engine will remain undisturbed unless estimated battery range falls to 5 miles or the driver kicks down on the throttle pedal with special gusto.
The Outlander also offers “Save” and “Charge” modes. As their names suggest, “Save” preserves the battery’s state of charge by using the gas engine to generate electricity at the same rate that driving depletes it, while “Charge” actively recharges the battery at the expense of fuel economy. Both modes add versatility to your commute; if you’re driving down the freeway at a relatively steady speed and would like to preserve (or charge) your battery for an upcoming stretch of less efficient stop-and-go traffic, the Outlander allows you to do that. The powertrain also offers user-selectable regenerative braking force, and opting for the maximum allows for one-foot driving in heavy traffic, slowing the vehicle by turning the electric motors into generators and using momentum to charge the batteries. 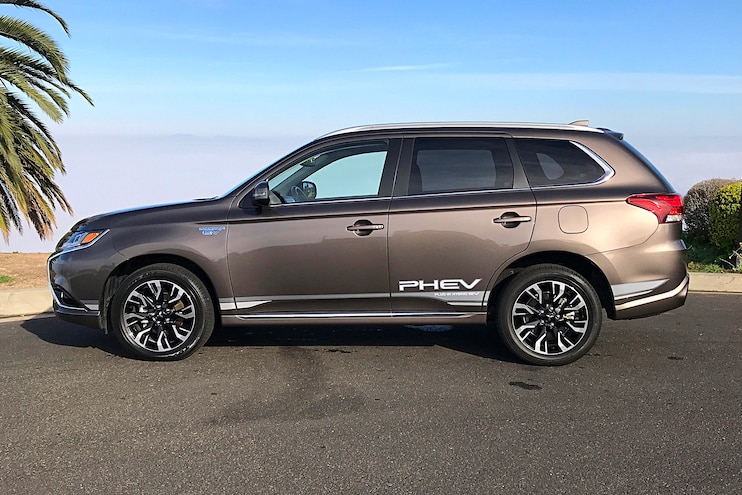 View Photo Gallery | 24 Photos
Photo 3/24   |   Daily Driven 2018 Mitsubishi Outlander PHEV Side
Mitsubishi claims a fully charged EV range of 22 miles, a number that’s almost realistic. By paying extra-close attention to the road ahead and using as much regenerative braking as possible, we could hit about 18 miles before the gas engine fired up. When driving more absentmindedly, we could only do about 14 miles to a full charge.
Luckily, charging the little 12.0-kWh battery was a simple process. This author doesn’t have a charging station in his garage, only a 120V outlet, but plugging the Outlander in as soon as we got home meant there was just enough time for the onboard charger to refill the battery before leaving for work the next day (Mitsubishi says to expect a 13-hour charging time on a household outlet). And while running errands on a Saturday, it was relatively easy to find charging stations in electric-friendly suburban Los Angeles—using a CHAdeMO DC fast charger dropped 80-percent charge times to just 25 minutes, while the more commonly available 240V chargers do the deed in 3.5 hours. Over the entirety of our week with the Outlander PHEV, we spent $15 at public charging stations and just $4 on our own home-brewed electricity. The lesson is clear: If you own one of these, get a 240V charger for your home. It’s way cheaper to charge in off-peak hours in your own garage than to use public stations. 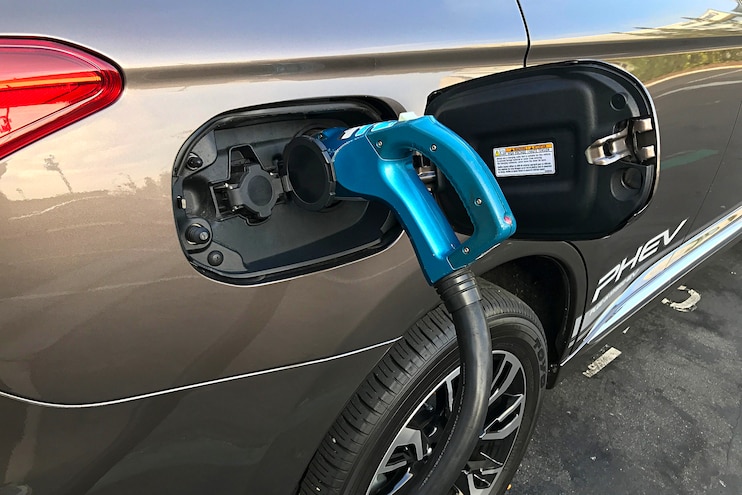 View Photo Gallery | 24 Photos
Photo 4/24   |   Daily Driven 2018 Mitsubishi Outlander PHEV Charging
Used as a typical car, the Outlander PHEV is a solid C student. Its handling and braking are fine, but not impressive, and interior fit and finish are probably a step below that of the similarly sized Toyota RAV4 Hybrid. The Outlander’s design dates back to 2014, so we were pleasantly surprised to see Apple CarPlay and impressive voice recognition in the SUV’s infotainment system. The rest of the interior, though, is boring and forgettable, with a few unpleasant plastics making their presence known, especially in the back seat. 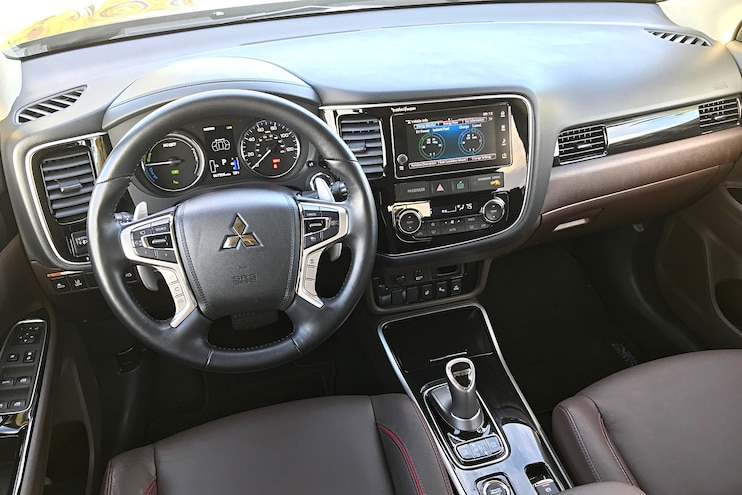 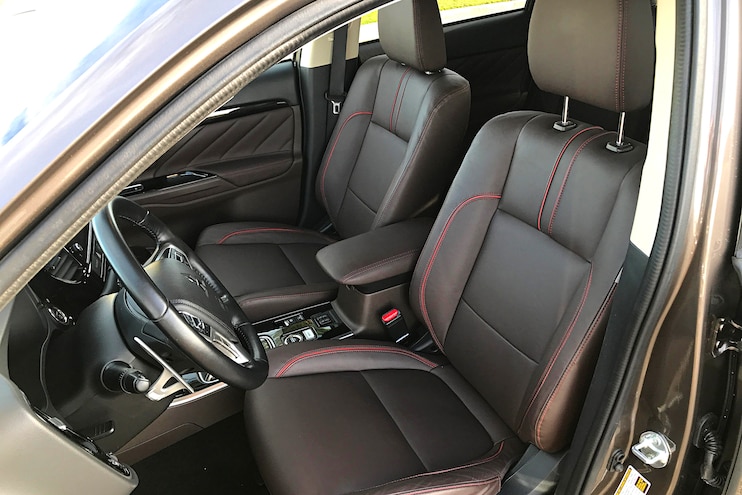 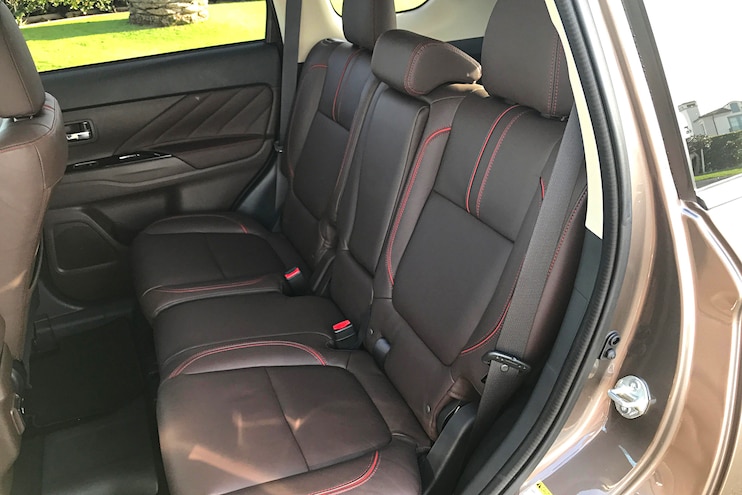 View Photo Gallery | 24 Photos
Photo 7/24   |   Daily Driven 2018 Mitsubishi Outlander PHEV Interior Back Seats
Perhaps the Outlander PHEV’s most significant obstacle to ownership is its price. Although the standard Outlander PHEV SEL is almost affordable at a base price of $34,595, our GT started at $40,295 and inflated to an even $42,000 with destination, those retro-fab bodyside graphics, carpeted floor mats, and a rear cargo tonneau cover. Forty-two large is a lot of coin for an aging vehicle, and that price is blunted only somewhat by the $5,836 federal rebate on the vehicle. That same $36,000-ish could buy a well-equipped 2019 Toyota RAV4 Hybrid, which offers 39 combined mpg with no need to worry about recharging.
In the Outlander PHEV’s favor, however, is its stellar, near-infinite fuel economy if you’re lucky enough to live within a few miles of the office. Recharging it a few times allowed us to burn just 6 gallons of fuel in about 250 test miles, yielding a weeklong average fuel economy of 42.1 mpg. Driving less and recharging more frequently would get us closer to the EPA’s rated 74 MPGe rating. And lest we forget, the Mitsubishi Outlander is currently the only all-wheel-drive plug-in hybrid SUV on the market, so tech-happy early adopters who simply must have the most advanced gas-powered SUV are really left with only one choice. That fact, plus the charming science-fiction whirs and zips coming from the powertrain, has convinced us the Mitsubishi Outlander PHEV’s global popularity is no surprise.