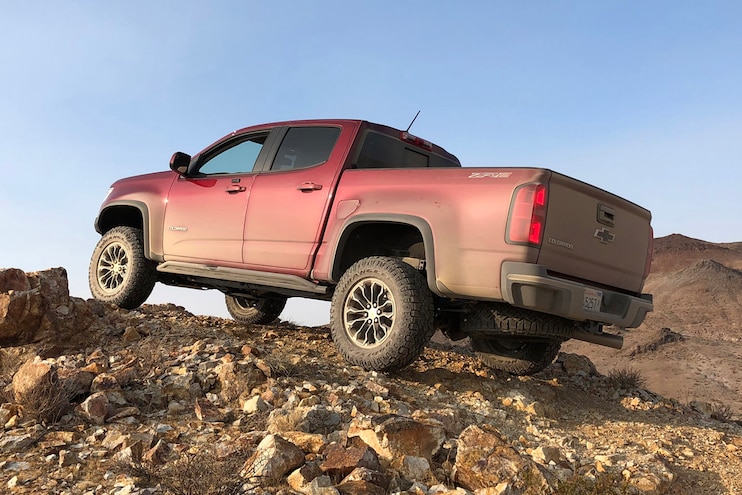 The midsize truck segment is on fire these days, and a lot of that has to do with some exceptional choices out there, such as our 2018 Chevy Colorado ZR2. Manufacturers are finally starting to deliver fully engineered machines that are not only an enthusiast’s dream but also capable of performing double duty as primary transportation.
We’ve put nearly 5,000 miles on our ZR2 during the second quarter through commuting and cross-country trips, and we’re managing to get in some really fun trail days. So far, we love the size of the Colorado, which is big enough to fit people and gear but small enough to maneuver in and around the city and on the trail. Functionally, it has everything we want in a daily driver (good visibility, an ergonomic layout, and technology such as Apple CarPlay and satellite radio) and all the things we look for in a trail rig (front and rear lockers, aggressive tires, good suspension, skidplates, rock rails, and the ability to turn off the electronics). 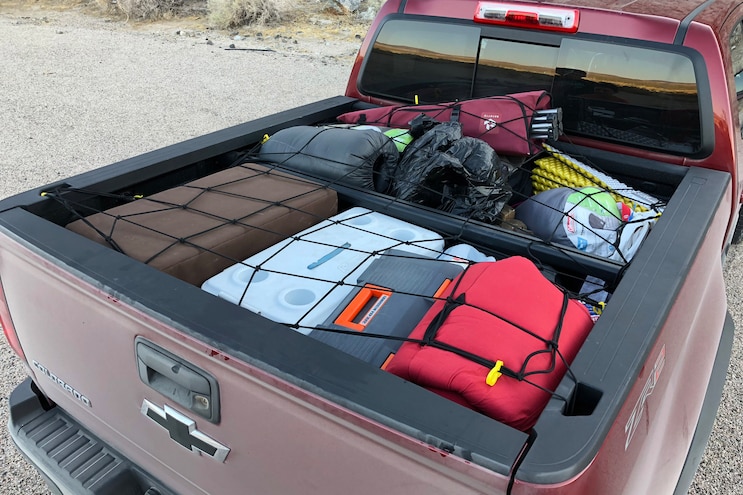 View Photo Gallery | 5 Photos
Photo 2/5   |   Packed to the gills, the ZR2 was the perfect size to support a weekend camping trip for four.
One of the highlights of this quarter was packing the ZR2 with two adults and two kids for a weekend in the desert. With the 5-foot bed filled to the brim, we hammered the Colorado all weekend throughout the desert at speed, much to the loud cheers of the teenagers in the back seat. In the desert, the ZR2 is spectacular, especially when all of the electronics are disabled, allowing you to drift through washes and hit smaller whoops at speed. The Colorado’s stiff chassis feels better than just about every other midsize out there, offering no chance for the body to express a squeak or rattle and really letting the Multimatic DSSV shocks work. We found that having some weight in the bed helped the rear suspension quite a bit.
However, getting the diesel ZR2 to play with you in the desert is a little more difficult than the gas model. Turbo lag conspires with the narrow powerband, and “steering” with the throttle requires precision. While it can be done, it takes a while to learn what makes the diesel a willing dance partner. For those who like the prerunning lifestyle, we recommend you grab the gasser, while we feel the diesel is right for those who see long days on the trail in their future. That being said, with the right moves and right throttle inputs, the diesel can still be a riot in the fast stuff. 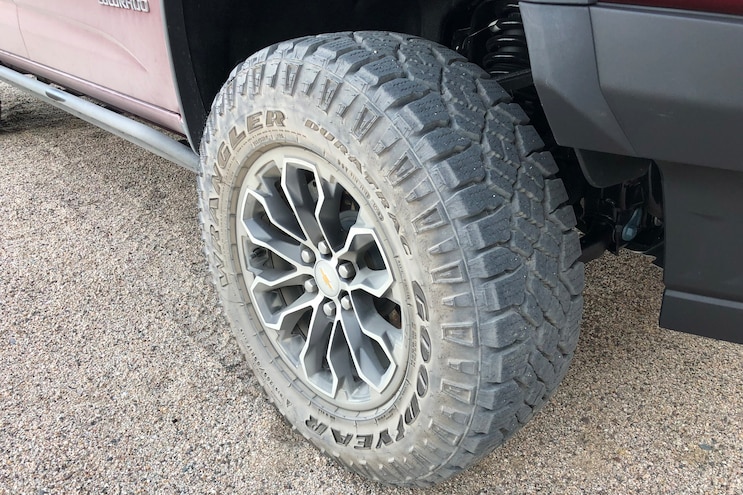 View Photo Gallery | 5 Photos
Photo 3/5   |   We have been really impressed with the beefy two-ply Goodyear DuraTrac tires on the trail; however, they do affect directional stability on the highway.
In the slow stuff, the 2.8L Duramax works just fine, although we had to carefully manage our throttle in deep sand to ensure we stayed on top and didn’t let those aggressive Goodyear DuraTracs dig in too far. In one section of really deep sand, we found using the lockers and manually shifting the six-speed automatic kept us from getting stuck more than once. Everywhere else, the ZR2 rocks, even in the rocks. Just set your T-case, lockers, and electronics to where you want them and drive.
During this report, we’ve seen the 2.8L Duramax start to loosen up a bit, as evidenced by our average fuel-economy improvement from 19.9 mpg to 22.0 mpg, even hitting a new best tank of 23.5 mpg on a trip to Arizona.
At 6,974 miles, the Colorado indicated that it was due for service, but not before we had to refill the 5-gallon DEF tank 1,500 miles short of our appointment. We took the Colorado in for its first service at DeLillo Chevrolet in Huntington Beach, California, setting us back a reasonable $86 for an oil service. While there, we also had the truck aligned to the tune of $190. Apparently, we were a little too enthusiastic while we were off-roading. 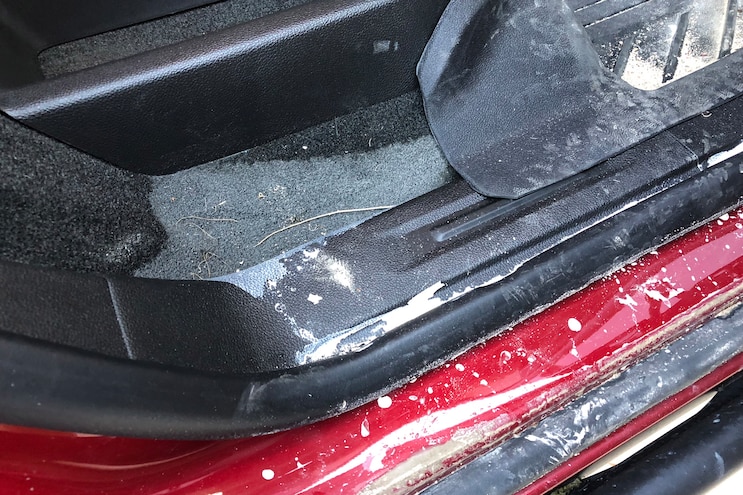 View Photo Gallery | 5 Photos
Photo 4/5   |   We found the limits of the Colorado’s rear door seals when we crossed an unseasonably high Mojave River.
Halfway through our test, the Colorado is proving to be a solid, economical, and fun pickup. There are a few places we’d like to see improvement, such as the quality of interior materials, a richer-sounding premium stereo, and more storage areas, but overall, the Colorado continues to impress on the way to work and between campgrounds. 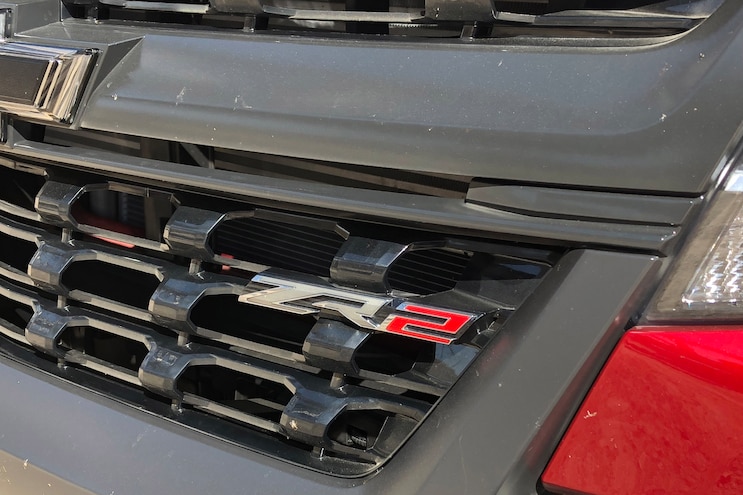 Previous reports: March/April 2019
Base price: $42,000
Price as tested: $50,400
Four-wheel-drive system: Part-time/automatic, electronically controlled, two-speed
Long-Term Numbers
Miles to date: 9,535
Miles since last report: 4,922
Average mpg (this report): 22.00
Test best tank (mpg): 23.50
Test worst tank (mpg): 18.50
Test Maintenance
Oil service ($86), alignment ($190)
Test Problem Areas
Airbag reflash (warranty)
Logbook Quotes
“The LED bed lighting is a great asset for unloading in dark campgrounds.”
“For the price, the ‘upgraded’ Bose stereo sounds muddy and unimpressive, plus the interior, while laid out well, has less impressive materials than you’d find in a Cruze.”
“Just added DEF before the oil change. Another company that can’t seem to get the DEF tank sized right. Seems like none of these trucks lasts until the truck is due for service.”
“The diesel definitely lags when being pushed hard, and the turbo takes too long to spool. However, if you drive it right, you can still get some serious thrills.”
“Four people took this midsizer on a weekend adventure, and everyone had a great time.”