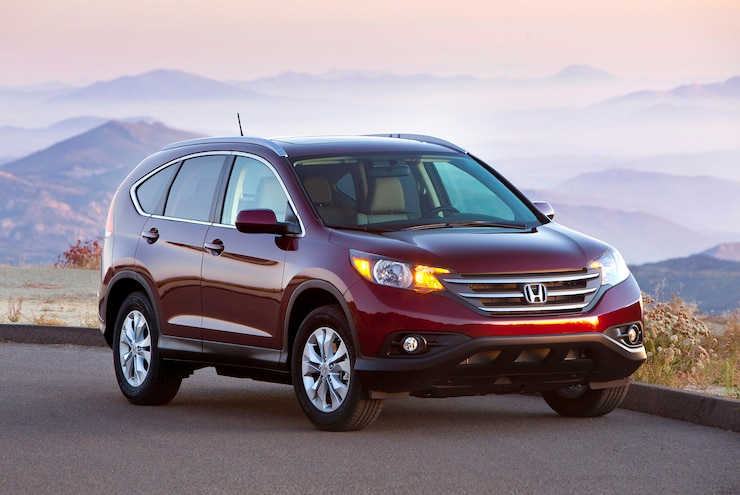 These model years mark the fourth generation of this perennially popular compact crossover. Buying a pre-owned version of the CR-V implies a certain degree of joining the herd, but that’s not necessarily a bad thing, especially when it means driving around in something safe with plenty of modern features at a reasonable price. This generation also enjoys more refinement and sound insulation than its predecessor.
The thing about the CR-V, perhaps the secret to its runaway success, is that it excels at certain aspects such as safety, interior space (more on that in a moment), reliability, and running costs, while scoring a solid B-plus in things like the driving experience, engine power, and quality of cabin materials. It’s no thrill machine (standstill to 60 mph takes a leisurely 9.4 seconds), but it doesn’t need to be and wasn’t designed that way. 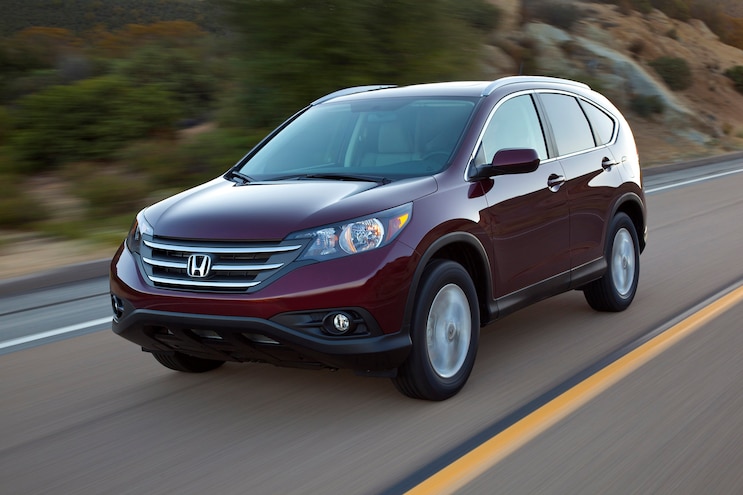 View Photo Gallery | 9 Photos
Photo 2/9   |   Pre Owned 2012 Honda Cr V F3q Action
The CR-V doesn’t offer a third seating row, but it is spacious for people and stuff alike. Even though the second row doesn’t slide forward and back, rear legroom is still generous at 38.3 inches. Behind the rear seats (that split and fold in the usual 60/40 fashion) is a commodious 37.2 cubic feet of luggage area. Fold the rear seats down—easily done, thanks to release levers—and that expands to an enormous 70.9 cubic feet, great when hauling stuff back from IKEA and/or Home Depot. The low load floor is another asset for which everyone’s spines will be grateful. 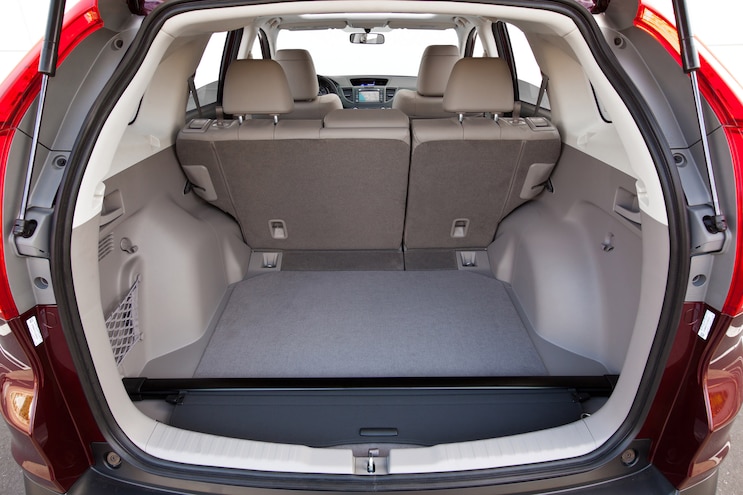 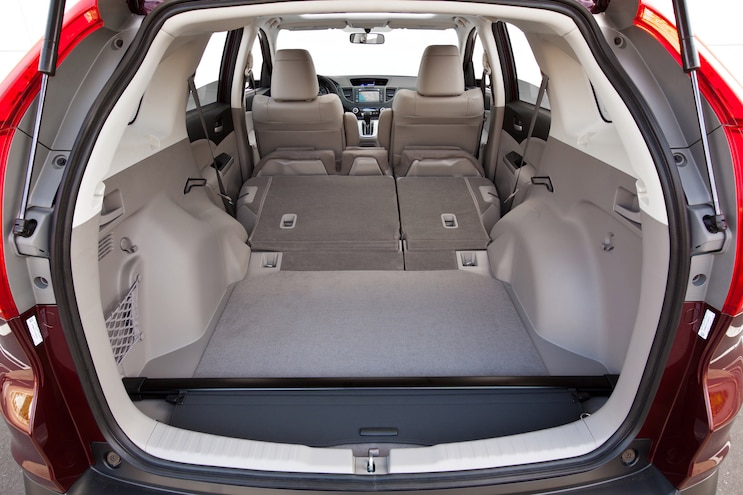 View Photo Gallery | 9 Photos
Photo 4/9   |   Pre Owned 2012 Honda Cr V Cargo Area Rear Seats Down
Trim levels, in ascending order of equipment, are LX, EX, EX-L (with leather upholstery and other luxury touches), EX-L w/Navigation, and EX-L w/Rear Entertainment System. EX is the point where 17-inch alloy wheels take over from 16-inch steel wheels. It wasn’t possible to have navigation and the rear-seat entertainment system in the same vehicle. Bluetooth and a rearview camera are standard throughout the range, while all-wheel drive is available for any trim. 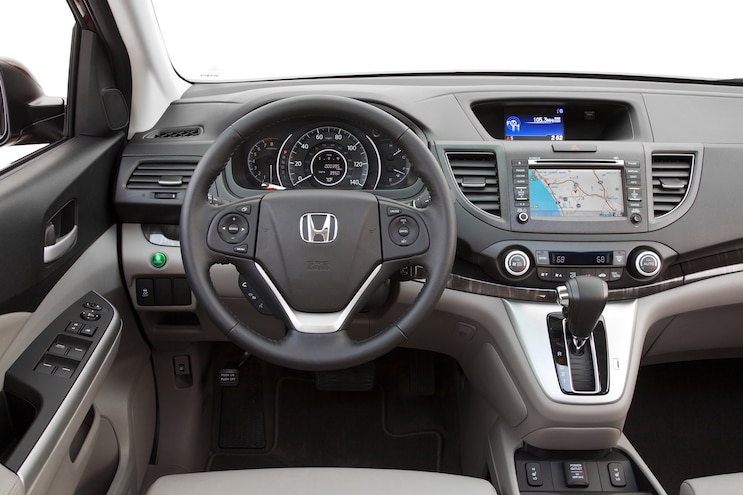 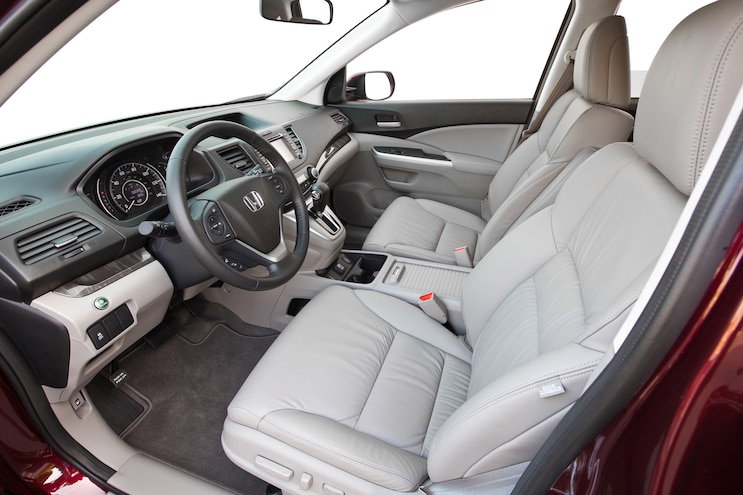 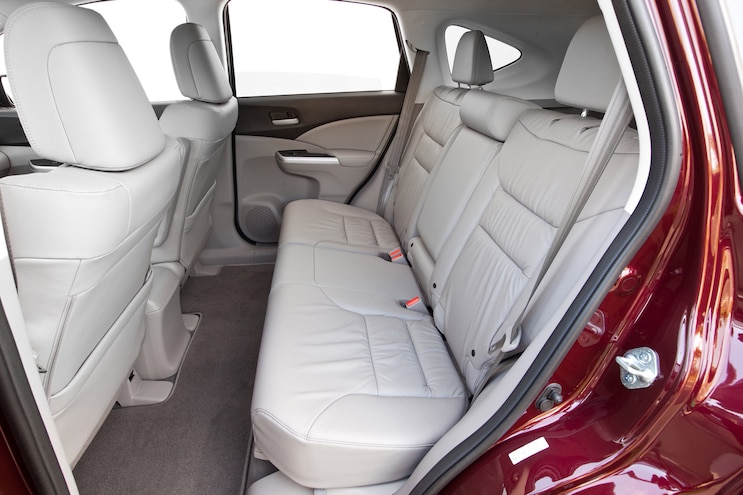 View Photo Gallery | 9 Photos
Photo 7/9   |   Pre Owned 2012 Honda Cr V Rear Seats
In the engine bay is a 2.4L four-cylinder engine making 185 hp and 163 lb-ft of torque. Pre-2015 front-drive versions achieve 23 city/30 highway/26 combined mpg. CR-Vs with optional Real-Time all-wheel drive (which is really a part-time all-wheel-drive system) return 22/29/25 mpg.
A mid-generation revamp occurred for the 2015 model year, replacing the five-speed automatic transmission with a continuously variable transmission (CVT). Although an enthusiast’s heart usually sinks at the mention of a CVT, the chances of someone like that buying a CR-V are pretty slim. And the resulting bump in fuel economy—26/32/29 mpg front-wheel drive; 25/31/27 mpg all-wheel drive—would please those interested in buying a CR-V. 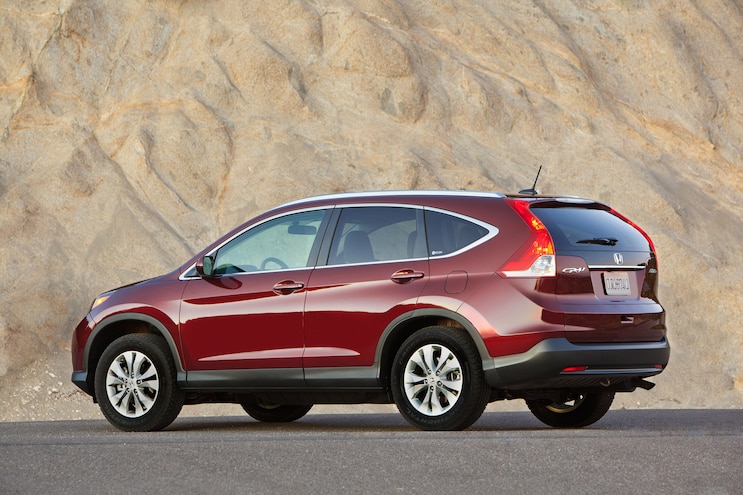 View Photo Gallery | 9 Photos
Photo 8/9   |   Pre Owned 2012 Honda Cr V Rear 3q
In other words, sensible family types who will also approve of the 2015 version’s extra safety considerations. Like the stronger body structure that performed well in the Insurance Institute for Highway Safety’s small offset crash test, a notoriously tricky challenge that many vehicles have failed to meet.
The 2015 update also brought an extra (but pretty much imperceptible) 18 lb-ft of torque, LED daytime running lights, blind-spot monitoring (EX and above), and the option of an infotainment touchscreen. A new Touring trim also came in above the EX-L level. This included 18-inch alloy wheels, powered tailgate, navigation, memory settings for the driver seat, adaptive cruise control, forward-collision mitigation, and lane-keeping assistance. Options for the CR-V are few—having more equipment usually means stretching to a higher trim.
Although Honda has an enviable reputation for reliability, it’s still not completely immune to the occasional glitch. The first few years of production saw several complaints regarding batteries going dead. Subsequent model years had issues with a grinding noise when starting the engine from cold and slow accelerator response. Excessive vibrations afflicted the 2015 model. 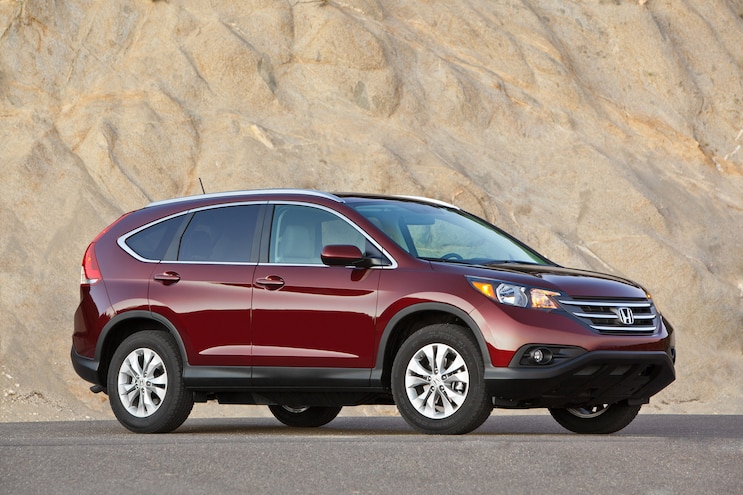 View Photo Gallery | 9 Photos
Photo 9/9   |   Pre Owned 2012 Honda Cr V Profile
Regarding recalls, the 2012 model had a brake shift interlock issue—moving the gear selector out of Park without pressing the brake pedal might allow the CR-V to roll off. Some engines in the 2015/2016 versions were built using the wrong pistons, and the connecting rods may not have been fitted properly, resulting in a possible loss of power. The 2016 CR-V is also included in the wider Takata airbag problem.
No doubt Honda straightened out a lot of these issues under warranty, but let’s play it safe and check out prices of a 2014 example in EX trim with front-wheel drive, in good condition and bought from a private party. We could expect to pay something in the region of $12,629. A similar Toyota RAV4 XLE is valued at $13,511, while a comparable Ford Escape SE (with a 178hp turbocharged 1.6L engine) would come in at $10,430.
As always, make sure there are full maintenance records. And a little money spent on an independent expert check-over could save hundreds down the line.