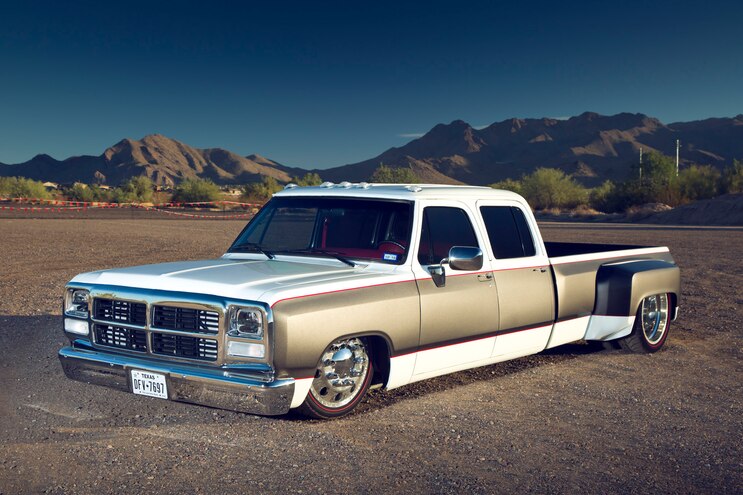 When it comes to the discussion of Dodge trucks, people generally have mixed opinions. Out of the Big Three from Detroit, Dodge has always received the short end of the stick in the popularity department. Some of mixed approval ratings may come from the truck’s bold design, but we think that’s what makes these trucks more distinctive from the rest. Yes, the counterparts to these trucks have good looks and are great for utility, but D-series trucks are very comparable models as well.
Starting in 1961, the Dodge offered these D-series trucks with an optional crew-cab configuration. Another offering was the Hemi engine, which is known for its incredible power capabilities. These innovations proceeded what the competition had, yet Dodge trucks never became the leader of the pack. There is, however, a resurgence of fans who are helping to give these trucks a major comeback. One of the things driving this movement is the popularity of diesel trucks. This scene is made up of die-hard enthusiasts who stand behind many notable diesel engines. Although the crew-cab model was nixed in 1985, the 1989 Dodge Ram lineup had an optional 5.9L 6BT Cummins engine, which was derived from commercial vehicles and is now idolized as one of the greats. 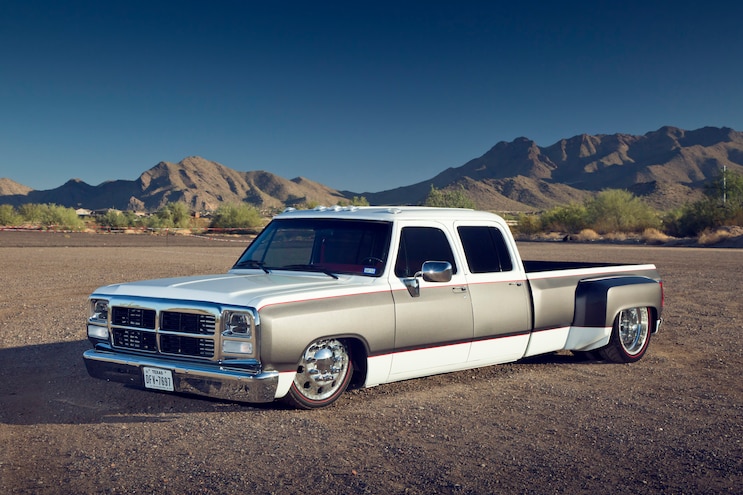 View Photo Gallery | 24 Photos
Photo 2/24   |   Although this Dodge D-350 is clean enough to win awards at any show, it’s roadworthy and was put to the test on a 2,000-mile road trip. It even towed a trailer for a portion of the journey and did so with ease.
Humberto Ortiz of Vulcan Specialties in Lubbock, Texas, is a huge fan of Dodge trucks because they’re different and stand out from the crowd. With a background in building hot rods and race cars, Humberto started work on his own 1937 Dodge that was chopped, channeled, and even had an early Hemi engine along with a custom chassis. As life went on, he and his wife became parents of two kids; this had a big effect on his approach to projects, including his hot rod pickup. Though his truck was going to be a real crowd-pleaser, he knew the whole family would not be able to enjoy it, as the truck only has two seats.
Looking to work on something that could showcase his talents and fit the fam, Humberto conjured a plan to build a crew-cab Dodge truck. Through an Internet search, he found this truck, a 1985 crew-cab dually that already had a 5.9L Cummins and five-speed manual transmission swapped in. Humberto was lucky to find this truck, as it was kept up well and in good condition for its age. This was important, as aftermarket support is weak, and the companies that do offer replacement products only have parts for two-door versions of these trucks. 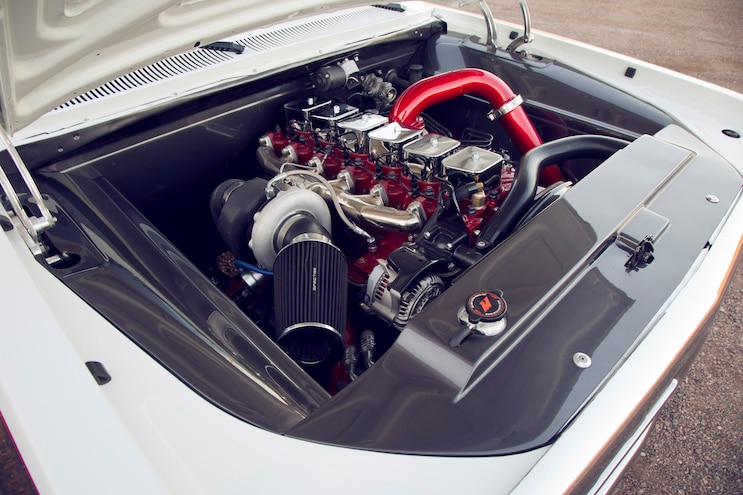 View Photo Gallery | 24 Photos
Photo 3/24   |   With a swapped-in 5.9L 12-valve Cummins turbodiesel engine, this truck now puts down 400 horses and 900 lb-ft of torque. Though this powerplant came in some of these classic Dodge trucks, the crew cab was discontinued before the Cummins was an option.
Humberto started this project by placing the truck on his frame table at Vulcan Specialties and carefully stripping the truck down to bare bones. The idea was to set this dually down low over a set of large semitruck-style wheels. To accomplish this, the suspension would need to be updated and use air-ride technology to allow it to sit low for show and rise up for driving. Up front, custom A-arms were made and a modern rack-and-pinion steering unit was mounted in a way that would make it function properly. In the rear, the chassis was cut off behind the cab and new rear framerails were constructed of 2x6 steel tubing. A custom rear four-link suspension was fabricated and now holds the factory rear end in place. An AccuAir leveling system manages the air ride, while braking power is increased with added rear discs and an air-over-hydraulic setup. 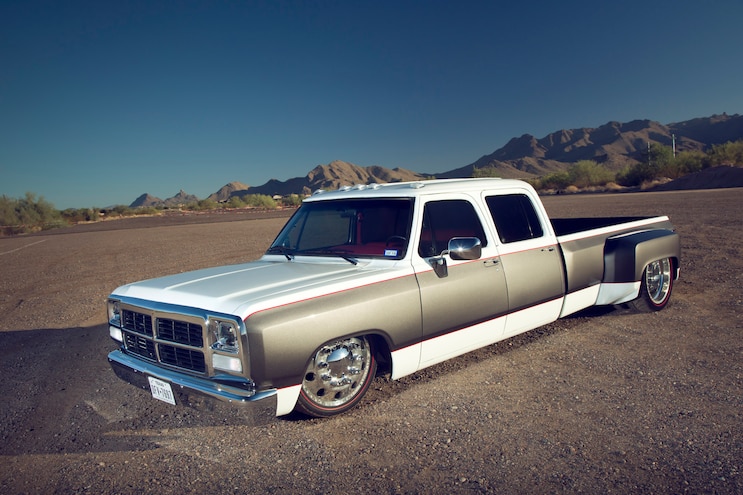 View Photo Gallery | 24 Photos
Photo 4/24   |   With limited options for Dodge trucks, a new front suspension was fabricated to use an air ride to slam this truck when stationary. It was also upgraded with a rack-and-pinion to improve steering capabilities and make it easy to turn the enlarged front wheels. 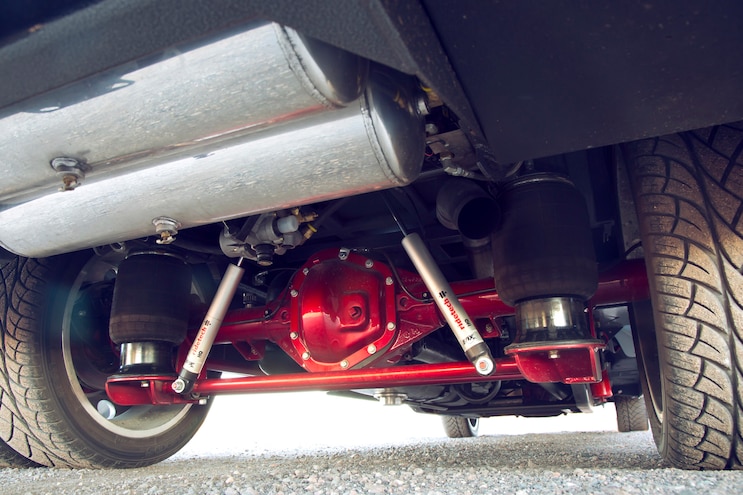 View Photo Gallery | 24 Photos
Photo 5/24   |   Usually, trucks with lowered suspension systems struggle when towing. The custom rear four-link and sleeve-style airbags combat the stresses of hauling heavy loads. Antisway bars from a Ford Excursion are even employed to further stabilize the ride.
Though the body was in decent condition, Humberto wanted to add some custom touches to really set off the truck’s looks and make it even more unique. Up front, the engine compartment has a shaved firewall and custom sheetmetal work. The skin of the roof was a bit compromised, and Humberto saw this as an opportunity to add some extra style. He cut a ribbed roof off a square-body Chevy Suburban and grafted it to the top of this Dodge. Since the added rear suspension was higher than factory, the bed floor was raised 3 inches to keep it functional. If you have ever seen the stock fenders of these trucks, you would notice that the rear fenders are more like over-glorified mudflaps. They were not going to work on this build, and Humberto found yet another solution at the junkyard. A set of Chevy C30 dually rear fenders were slightly modified and attached to the bedsides. Another eyesore was the front and rear utility-style bumpers, which were replaced by Chevy C10 chrome versions. 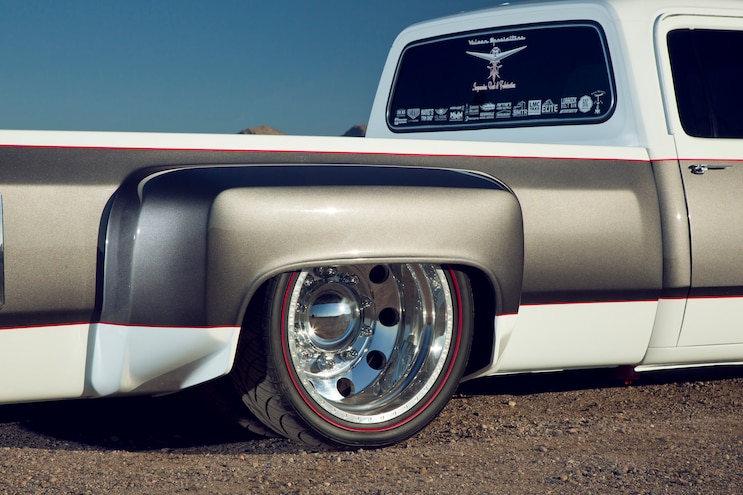 View Photo Gallery | 24 Photos
Photo 6/24   |   An underlying theme to the build was to have it styled as if it were a mini semitruck. It even has a set of 22-inch American Force 10-lug wheels that were bolted to the 8-lug hubs with the use of custom adapters. The wheels are wrapped in low-profile Nitto 420S tires that were given a retro-styled redline by Diamond Back Classic Tires. 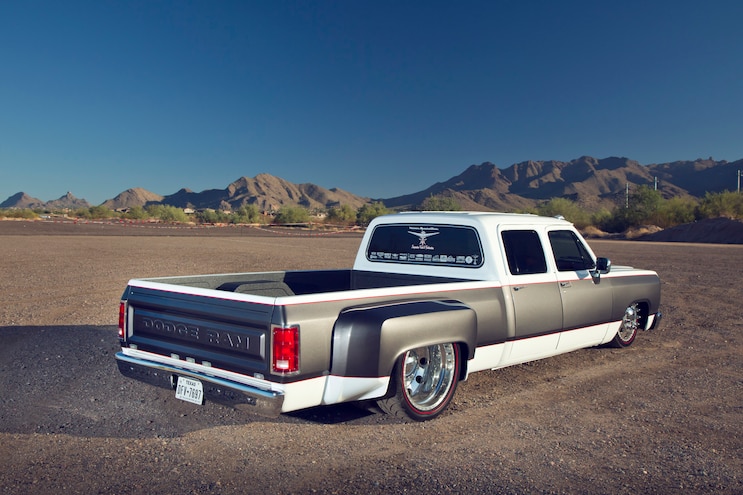 View Photo Gallery | 24 Photos
Photo 7/24   |   The modified rear suspension forced Humberto to raise the bed floor 3 inches from its factory form. The gooseneck receiver protrudes the center and Backbone Industries adjustable tie-downs ensure that this dually can still be used to haul loads or a trailer when necessary. View Photo Gallery | 24 Photos
Photo 8/24   |   To get the right look for this truck, a set of dually fenders from a Chevy C30 were slightly modified and attached to the bedsides, replacing the old radius hoops.
Completing the look on the exterior of this classic hauler is a simple two-tone paint job. Again, Humberto wanted to keep things simple and decided to have the paint scheme mimic what you would find on an original version of this truck. Staying true to the Dodge brand, he chose to go with Bright White and Granite Gray, which are late-model Chrysler SRT paints. Red is a third color that can be found on pieces of the engine and suspension, which were cleaned up and coated while the body was off to get painted. During this time, the transmission was also swapped out for a six-speed NV5600 manual for its better gear ratios. The final piece of the puzzle was the interior that was reupholstered in red Relicate leather by Mario’s Trim Shop. The interior still has all the original equipment, but portions were reshaped before getting recovered. The dash also features a one-off instrument cluster that holds the custom set of Esquire gauges built by Classic Instruments. Topping it all off, Custom Sound Works upgraded the audio system with Digital Designs processor and amplifier along with a Kicker Audio subwoofer and Focal speakers. 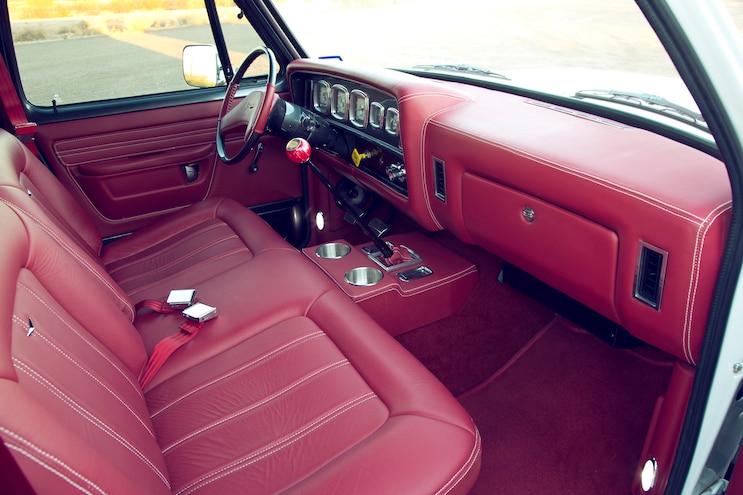 View Photo Gallery | 24 Photos
Photo 9/24   |   The truck’s overall concept was to cruise in something clean, but also fit Humberto’s family. They can do so, as Mario’s Trim Shop reupholstered the modified factory seating in luxurious red Relicate leather. 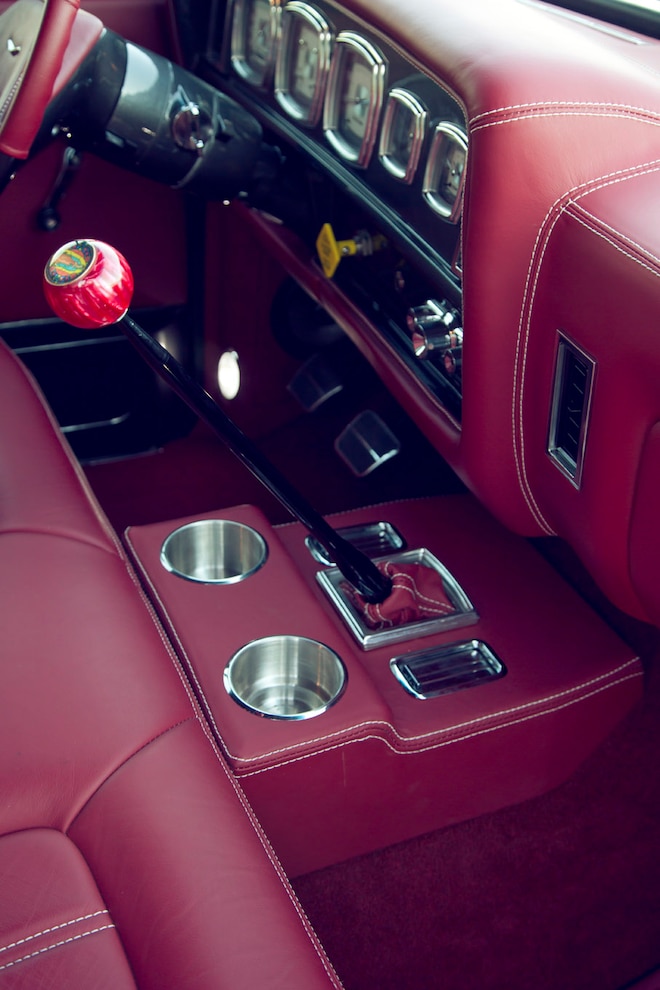 View Photo Gallery | 24 Photos
Photo 10/24   |   Adding to the semitruck theme is a manual six-speed NV5600 transmission. Shifting gears while hearing the turbo whine definitely gives the driver an experience that mimics the feeling of piloting a big rig down the highway.
The end result is a Dodge Ram D-350 dually that pays homage to its original version with a modern twist. This restomod version of the truck is not just for show, either. Humberto actually pilots this beast on the open road and is not afraid to take it on long road trips. In fact, one of his longest rides in it was a 2,000-mile round trip to Scottsdale, Arizona, and back. He has even used it to tow a trailer and told us that this truck, now known as “Gennie,” handled the load with ease.
Taking this truck out and putting it to good use is a testament to Humberto’s skills as a builder. We find this one refreshing, as not many others have been brave enough to take on a build of this magnitude and completely nail it. A job like this comes with some sacrifices, and Humberto thanks his wife and family for understanding the long hours required to complete his vision. His father also had a helping hand along with places like West Texas Auto Colors, Lubbock Bolt Bin, Farmers Hose Supply, Benitez Mobile Truck Repair, Elite Media Blasting, and Seminole Diesel Service.
Since it was completed, Humberto said he has gained a huge following of fans who have come out of the woodwork. This dually is a stellar example of how these trucks can be shined up. We sure hope it starts a trend, because these classic pickups are underrated and it would be great to see more of them given a special treatment like this one. 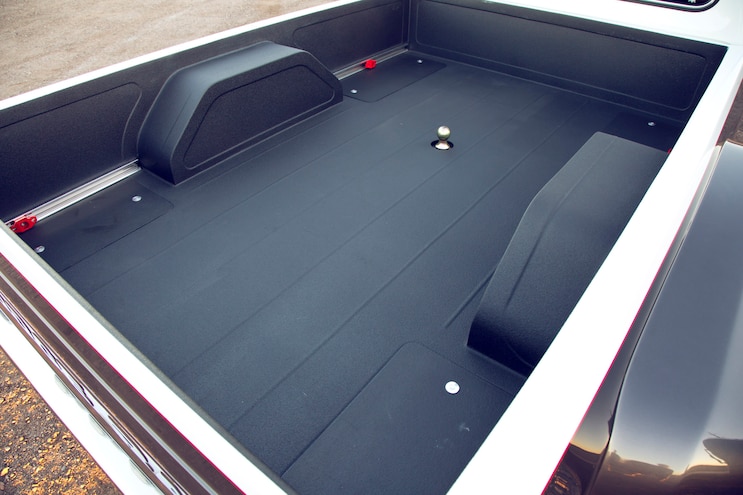 View Photo Gallery | 24 Photos
Photo 11/24   |   Special opening compartments were made in the bed floor to access the electrical and braking system. As you can see, Humberto Ortiz used a Wilwood master cylinder and added an air-over-hydraulic system to aid in stopping this big beast.

- OF
By Fuelish Media
1 Articles