A world where you can design your own ideas 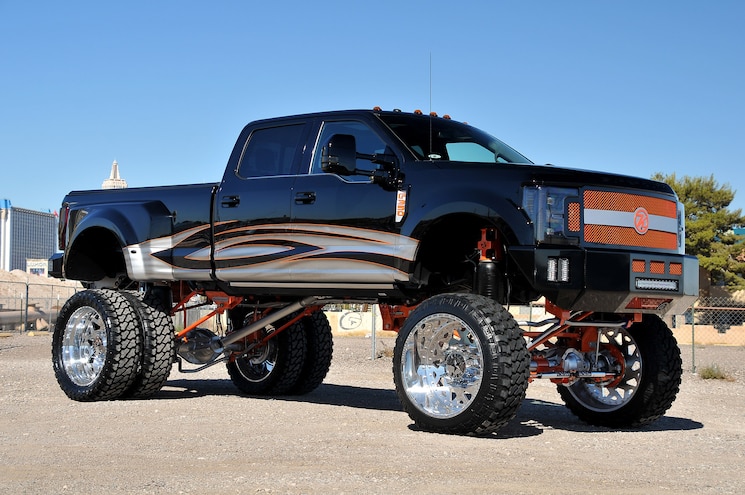 If you were told you could have your dream truck completely designed to your liking, what would you do to it? If you could have the truck of your choice, redesigned to your personal specifications for you to enjoy, how would you design it? Would you have it body dropped or would you lift it? The choice would be yours. Most people would say taking the top-of-the-line ’17 Ford F-350 Platinum and cutting into it would be crazy. Who would do such a thing? Rory Griffith of Las Vegas, Nevada, may just be crazy enough to pull it off.
Loyal to a fault, Rory made a 2,400-mile trip to purchase a new truck from his friend Josh Robinson, who works in Kansas City at a Ford dealership. Sure, he could have sourced the truck locally in Vegas, but supporting the network of people in the truck scene is important to Rory. If someone is going to make a profit from the purchase he’s making, Rory would much rather it be someone in the truck culture. He knew what he wanted and Josh was able to find the exact model he desired: a ’17 Ford F-350 Platinum. The stock truck was doomed as soon as it was driven off the lot. 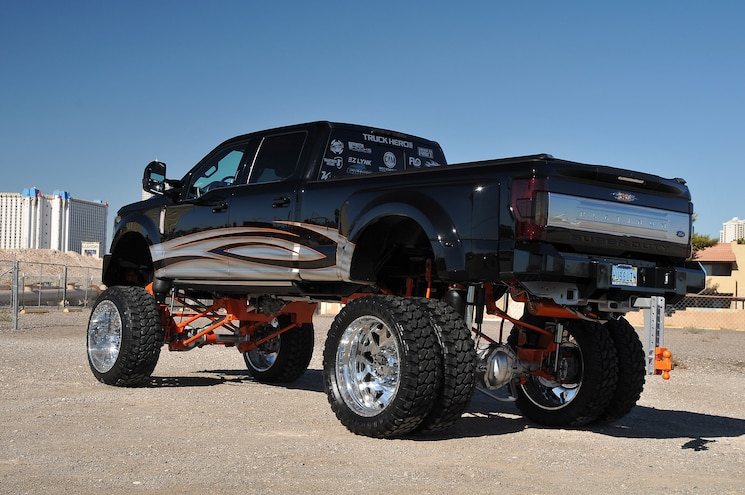 View Photo Gallery | 18 Photos
Photo 2/18   |   2017 Ford F 350 Platinum Reimagined Rear 3q
What brand-new truck doesn’t have a crushed tailgate as its first body modification? With only 2,600 miles on the Ford, Rory somehow managed to drop the power release tailgate while towing his gooseneck trailer. Needless to say, the truck and trailer got very intimate for a brief moment, which catapulted Rory’s need to customize his new rig. After consulting with his friends at Complete Automotive Marketing, Rory shared his vision for the Platinum, and Matt Holden started to lay down the brickwork. The first order of business was to tear down the truck and have Ryan Evans at Counts Customs in Las Vegas add the Matrix Black paint with silver graphics and orange pinstripe.
Once the exterior was brought back to life and customized, the next step was having Ghetto Bob from Homeless Entertainment who operates out of Counts Customs in Las Vegas add all the audio components. Now that the truck was beating down the block, it was time to decide if it was going to scrape the ground or scrape the sky. With Rory’s mini-truck roots, he was hell-bent on having an adjustable air-ride setup, and he chose to lift the massive Ford by opting for the Kelderman lift kit. It was the natural choice to accomplish his goal, so Ross Paschal, Dillon Labit, Bryce Mills, Tyler Dale, Gage Bolden, and Gary Munsie, were enlisted to help install it and get the Ford floating on the Kelderman cloud. 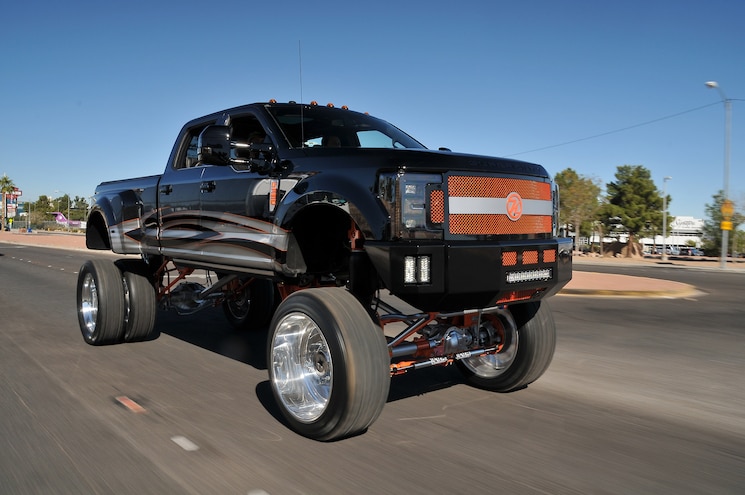 View Photo Gallery | 18 Photos
Photo 3/18   |   2017 Ford F 350 Platinum Reimagined
After the lift was in place, Rory added the adjustable FLO Airride suspension using FLO tanks and compressors and Slam air management provided by Low Rider Depot. Since the Ford was still rolling on stock wheels, Rory knew what was next on the list. Wheels are similar to jewelry, and the right jewelry can make a vehicle stand out in a sea of lifted trucks. He decided to go with some of the best rolling attire on the market today. He turned to Jason Sandusky at American Force Wheels, and the two were able to come up with the perfect application: a set of 28-inch Contra wheels and Fury tires. 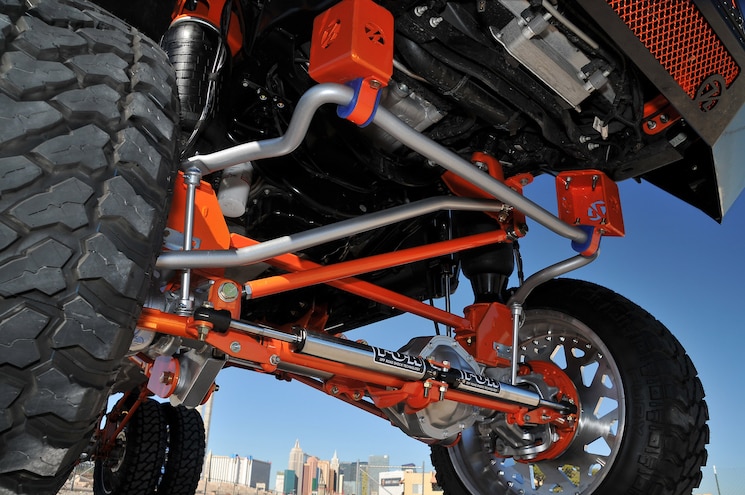 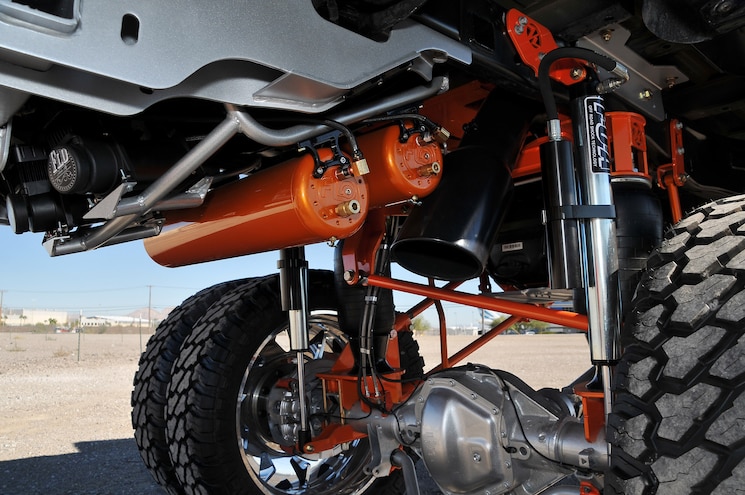 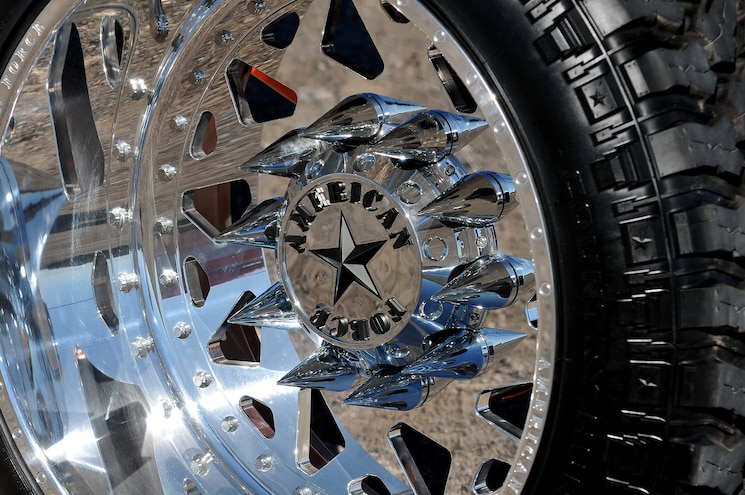 View Photo Gallery | 18 Photos
Photo 6/18   |   2017 Ford F 350 Platinum Reimagined Wheel
To round out the exterior modifications, Rory had Kelderman Alpha bumpers added to the front and rear of the dualie along with an orange mesh grille. With every inch of wire installed and properly loomed, and Deutsch connectors installed, heat shrinked, and tucked away, it was time to focus on letting this beast breathe. A 5-inch custom-made downpipe-back exhaust system was installed with V-band flanges. To unlock the hidden power of the Platinum, the EZ Lynk module with tunes was added from the guys at AMDiesel Performance out of Canada. To round out the engine modifications, an EGR delete and CCV delete were installed as well as a complete intake piping system that provided the F-350 with plenty of giddyap.
With the truck safely nestled in place, it was time for Rory and his crew to step back and take in what they accomplished. Without the huge help of his friends and partners in the industry, none of this would have been possible. Rory wishes to express his appreciation for the people who helped through all the late hours, including his wife, Jenna, for her support. Platinum Reimagined is the vision Rory had from his initial drive to Kansas City to purchase the Ford dualie, and his dedicated and hard-working team rebranded his Ford to make it his dream truck. 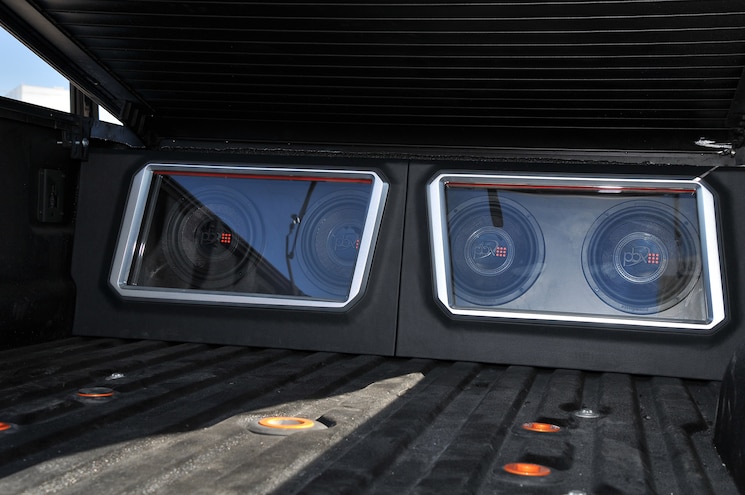