Inspired to Keep Raising the Bar 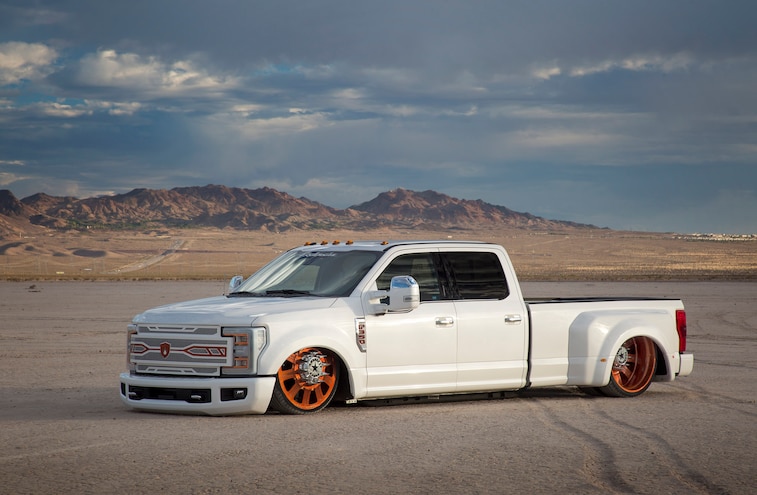 With his heart of gold and positive attitude, our man Justin Benoit is a different breed altogether—and his drive is something this industry could certainly use much more of. When he set out to shock the custom truck scene with the world’s first laid-out, new-body F-350 Platinum, it wasn’t due to his ego or pride, and it wasn’t a company branding exercise or the like. It was simply to bring his never-give-up attitude to life via a full custom build. With a story as unique as Justin’s, we wanted to deliver it to you in a different manner, so we sat down with him at LST in Texas and interviewed him to get some insight into exactly what it took to bring this creation to fruition. Without further ado, let’s take it way back and bring you this month’s cover feature interview-style like we used to do about a decade or so ago in these very pages:
Truckin’: Tell us how this build started.
Justin Benoit: When I first saw the unveiling of the ’17 Super Dutys, I fell in love and knew I had to own one. I called up my local Ford dealers and no one would order me a two-wheel-drive Platinum. I finally found a dealer down in Houston, Texas that would order one, so we went for it. 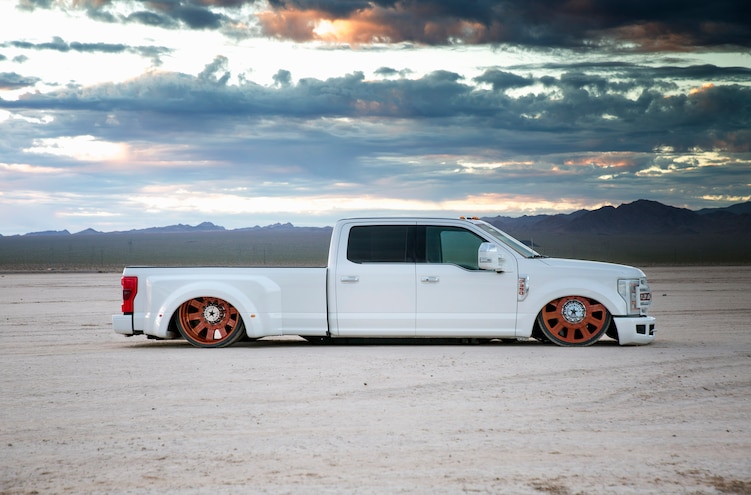 View Photo Gallery | 18 Photos
Photo 2/18   |   2017 Ford F350 Never Give Up Side View
TR: What made you decide to order a brand-new truck and then cut it up?
JB: Well, I was one of the first individuals with a two-wheel-drive ’17 F-350 Platinum. It landed from Ford in October 2016, and I knew I wanted to go all out with a full custom build, so my first call was one of my good friends, Robbie Bryant from KEG Media. He’s literally down the road from me, so we got together and formed a plan of attack.
TR: Now it’s starting to make sense. Robbie is definitely a bad influence! So once you guys knew it would be a full build, what was next?
JB: Robbie came over and we walked around the new truck sitting in my driveway. I wanted to build something that spoke a bit about my journey to get where I am today, and that theme was Never Give Up. I knew I wanted to lay it out, so Robbie did what he does best and whipped up a little something to match what was in my head. 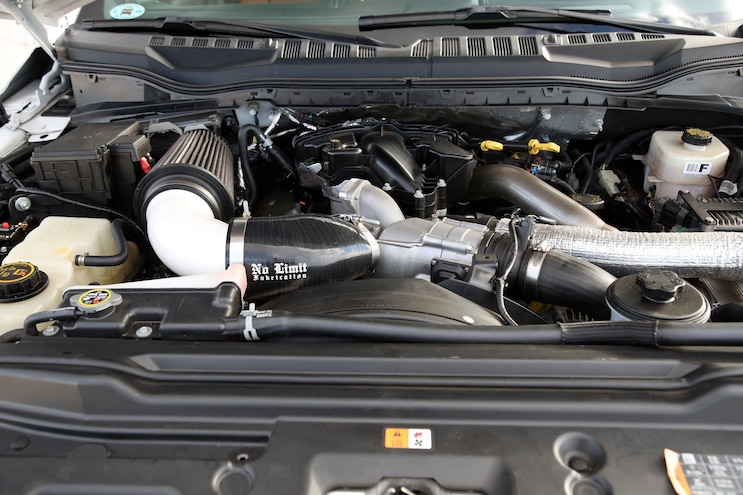 View Photo Gallery | 18 Photos
Photo 3/18   |   2017 Ford F350 Never Give Up Engine
TR: Yeah, we remember the rendering dropping and the race began. There was some friendly competition going around to be “the first” with one of these trucks right?
JB: That’s right. Robbie and I spent a couple of weeks looking for a shop to tackle the build, and we ended up working a deal with Ekstensive Metal Works to debut on its TV show. I am originally from Louisiana and Ekstensive used to show up to our big car show Midnight Fantasy Tour with the baddest rides any teenager—or grown man for that matter—had seen. They rolled deep and drove some of the coolest builds out to the show from Houston, so that stuck in my head and we got with Bill to work his magic. The race thing always happens when new-body-style trucks come out, but it was all in good fun. 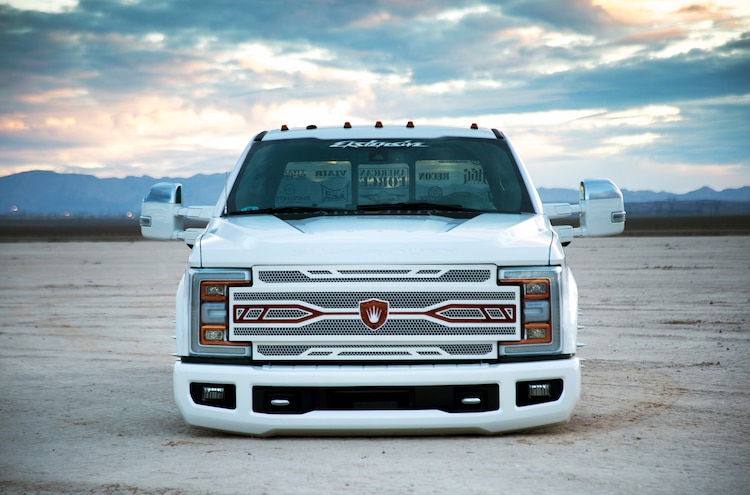 View Photo Gallery | 18 Photos
Photo 4/18   |   2017 Ford F350 Never Give Up Front
TR: Tell us more about your Never Give Up motto. Where did it stem from originally?
JB: Many don't know exactly what happened. But I was in a horrible workplace accident back in 2013. There was an explosion, and I was severely burned and was in an induced coma for 38 days. After I was finally brought back to the land of the living, I was stuck in the hospital recovering for several months. It took about two years of extensive physical therapy to get back some of the range of motion in my arms. I’m still lacking about 30 percent of motion and not able to fully straighten both arms. My arms are completely skin grafted, and I have some more grafts here and there. This event really changed my life and outlook, and it’s what the truck was named after. All through it, I just kept telling myself, Never give up—no matter the odds. I’ve told this story to a few close people to me, and as much as I don’t feel like I inspire others, pushing through these tough times and pushing through this F-350 build inspired many people to message me and tell me my story inspired them. That truly means the world to me and makes it all worth it. 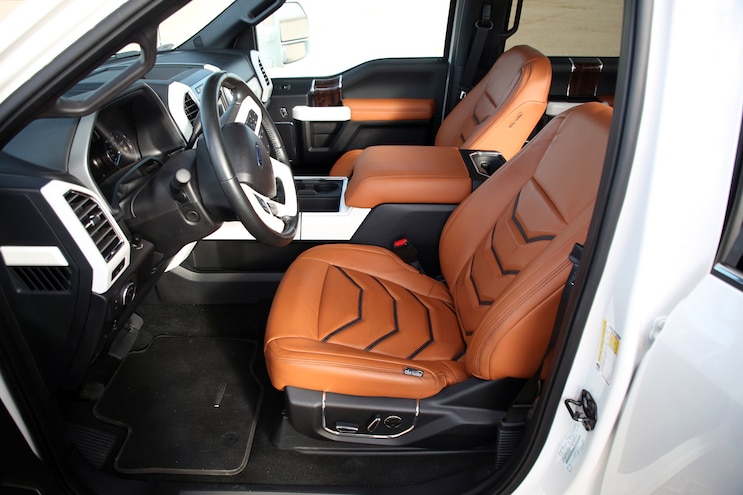 View Photo Gallery | 18 Photos
Photo 5/18   |   2017 Ford F350 Never Give Up Interior
TR: Wow, man! We’ve talked many times and we knew some of your story but didn’t know just how close you came. Wild ride, man. Thank you so much for opening up and sharing with our readers! You really are an inspiration to more than you think—and a true friend to many. We’re glad to know you and proud to see what you’ve accomplished by keeping a positive perspective and pushing forward. Thanks so much for your friendship. Is there anything else you’d like to mention before we get back to the LST shenanigans at hand?
JB: Thank you for doing this story interview-style, as I think that was definitely a fun little twist to help put my words out there for the masses. Also, I really couldn't have done any of this without my wife, Maebell, my kiddos, my family, and some of the best friends a guy could ask for—and all of you out there who positively contribute to our industry and custom community! 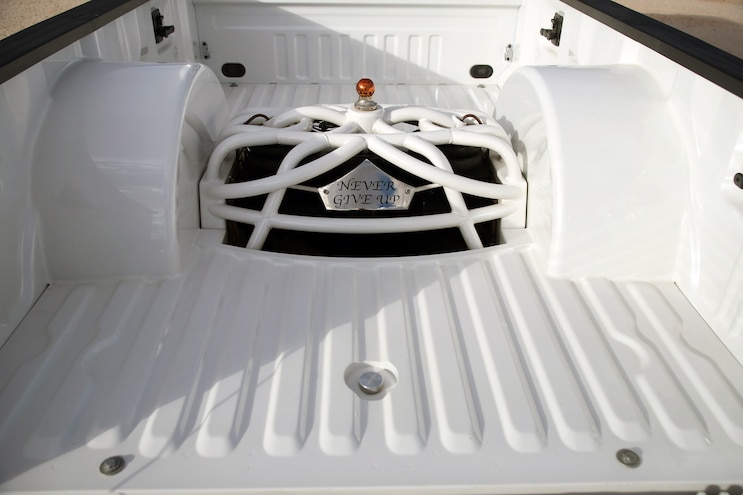 View Photo Gallery | 18 Photos
Photo 6/18   |   2017 Ford F350 Never Give Up Bed
Justin is proof positive of the will to never give up and how, with the right attitude and perspective, there’s not much that can’t be overcome! Check out the spec box for more detailed information on the mods and parts used to create this one-of-a-kind tow pig.