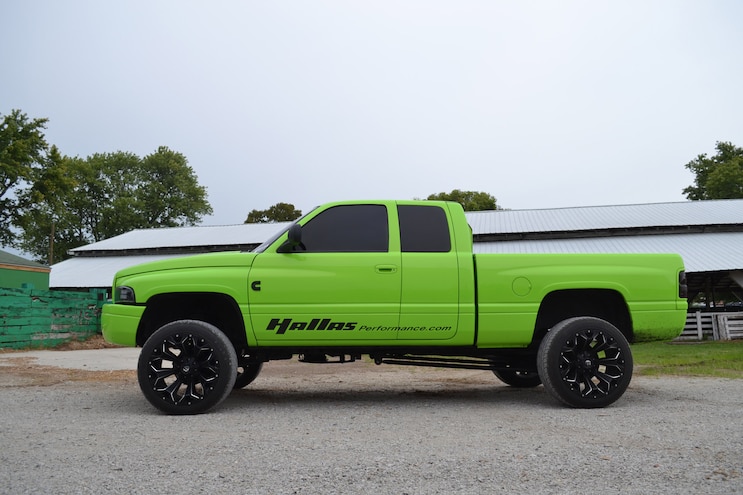 Seeing a diesel truck make a 1,000hp dyno pull never gets old. Many enthusiasts view that many ponies (or more) being thrown at the rear wheels as the mark of a true, badass street truck. There's no doubt, "making a grand" is a goal many performance-oriented diesel owners aspire to achieve.
However, taking all of that into consideration, the thing that makes Nick Iafrate's '99 Dodge Ram 2500 "special" when compared to other thousand-horse rigs is the fact that its 5.9L Cummins engine generates the impressive power with an old-school rotary VP44 injection pump, which makes it one of the most powerful "VP trucks" on the planet.
After the Dodge Ram posted 996 hp back in 2013 in a diesel scene that's constantly evolving, we wondered how it was possible for it to remain largely unchanged—frozen in time, so to speak. It turns out, the story actually begins a long time ago.
It's hard not to notice the Lamborghini Green color and the huge "Hallas Performance" stickers on the sides and tailgate. As it turns out, the truck was built by the very same Mike Hallas who competed in Diesel Power Challenge 2006 with a monster-sized Ford. After picking up a VP44-equipped Dodge Ram to use as a shop truck, Mike decided to try doing a full build on something new. Always a fan of the underdogs, Mike embarked on his next project: building the most powerful rotary-pumped Dodge Ram on the planet. Sadly, not long after the landmark 996hp dyno pull, Mike passed away in a mud-racing accident. 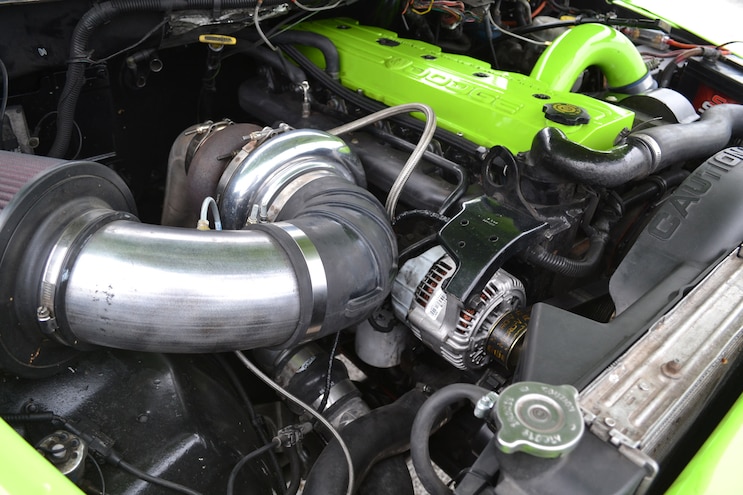 View Photo Gallery | 24 Photos
Photo 2/24   |   174732345
"Everybody always remembered Mike and the green Dodge Ram 2500 roaming around Romeo, Michigan," Nick says. "After Mike sold it and then passed away, I always kept track of who owned the truck, and where it was," he continues. "The rig changed hands three or four times after Mike had it, and I finally made a deal to buy it after the last owner cracked the block with a nitrous mishap." Now that the truck he remembered so fondly was back in its hometown, Nick went about rebuilding the rotary-pumped wonder. 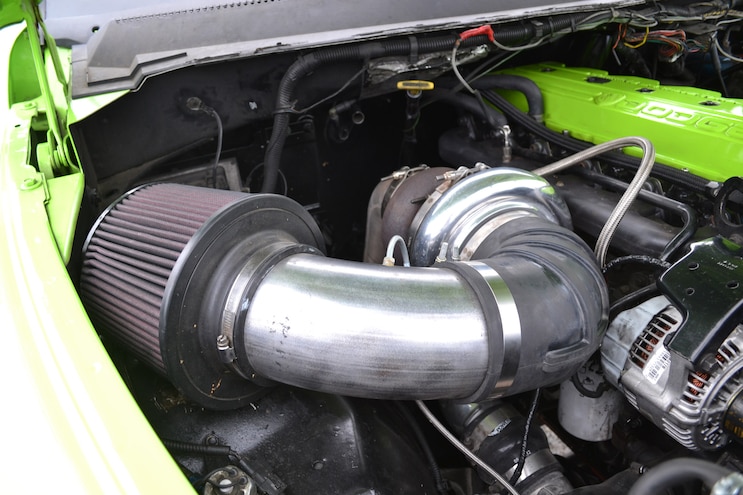 View Photo Gallery | 24 Photos
Photo 3/24   |   174732342
Since the old engine was toast, a new short-block was the first thing on the list of makeover items. Nick wanted this new 5.9L to hold together no matter what, so he rebuilt the engine using ARP main and cylinder-head studs, and rod bolts. The engine's breathing was also upgraded by a Stage 2 camshaft from Colt Cams. The top of the engine remains largely unchanged, as Nick kept the same injector and pump setup Mike installed years ago. 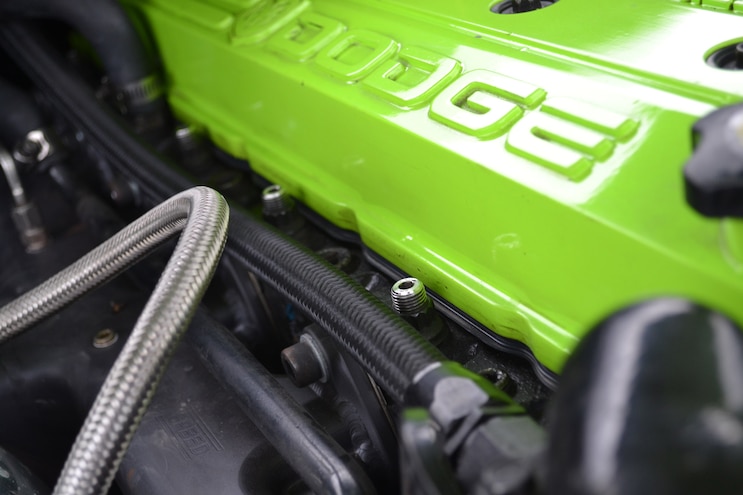 View Photo Gallery | 24 Photos
Photo 4/24   |   174732333
Airflow priorities are shifted slightly, however, as Nick chose a single 68mm BorgWarner S400-based turbocharger from Stainless Diesel to replace the 63mm/75mm compound setup Mike used. "It's amazing how little the truck changed in the years since Mike's passing," Nick says. "It's a testament to building something right in the first place." 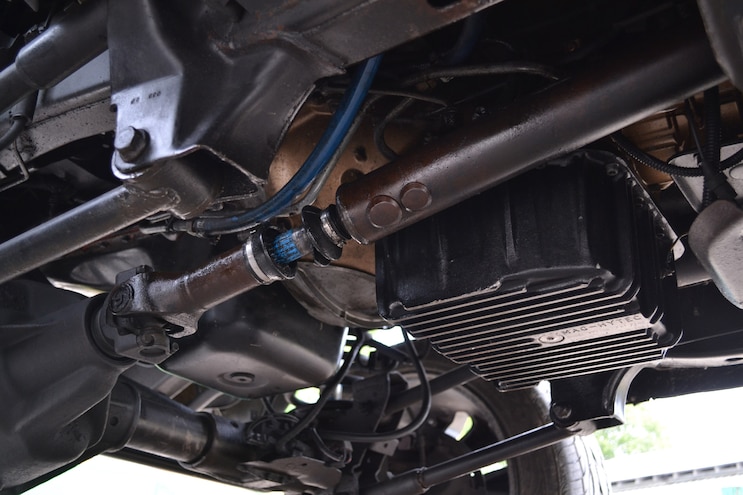 View Photo Gallery | 24 Photos
Photo 5/24   |   174732312
The first iteration of this Dodge Ram was created with a lot of help from Mike Jambrowski of MJ Tool Fab, also known as "Monster Pump Mike" for the high-volume VP44s he builds. Mike also incorporated an innovative, huge, single-disc bolt-together torque converter for the 47RE four-speed automatic transmission, which allows making clutch-disc changes on the fly. The input, intermediate, and outputshafts are also billet pieces selected by Mike. A DNJ Components valvebody controls shifts. Nick also had Firepunk Diesel rebuild the transmission with all new seals and clutches.
On the outside, the truck's most obvious feature is its crazy Lamborghini Green color, which also has White Pearl added. The over-the-top paintjob is accentuated by a smoothed Street Scene roll pan and front bumper, an aftermarket cowl-induction hood, and a huge 8-inch MBRP exhaust stack. Street-strip Nitto 420 tires are mounted on 22-inch Fuel wheels, and grip is assured through a set of Flight Fab traction bars and a Detroit Locker differential. 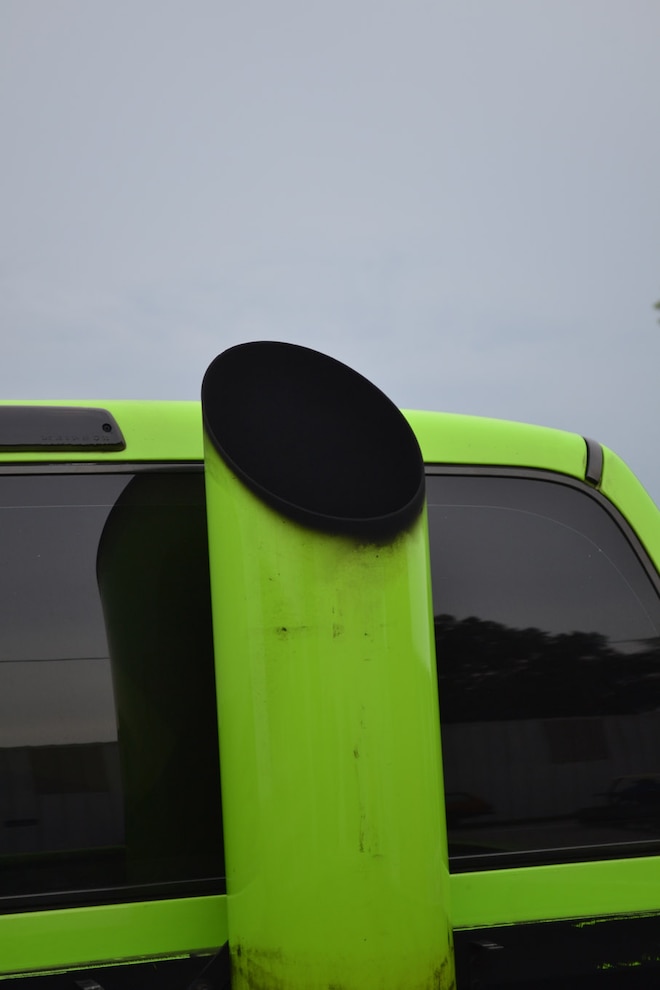 View Photo Gallery | 24 Photos
Photo 6/24   |   174732327
"The paint, exhaust, interior, and (most importantly) the pump are all the same as when Mike owned it," Nick says. Not only is the look the same, the power is, too. Despite switching to a single turbo, the Dodge Ram cranked out 908 hp on fuel and a whopping 1,019 hp with nitrous at Scheid Diesel Extravaganza 2018, making it one of the most powerful VP44-injected trucks in the U.S. "I tried to keep the truck as original as possible and continue on with it as Mike would have," Nick adds. "I still have the memories of his shop door open at 2 or 3 a.m., when he was helping customers get ready for an event. He was just that kind of guy. I think he'd be glad his truck is still competing in dyno events, racing, and driving around town...just like always." 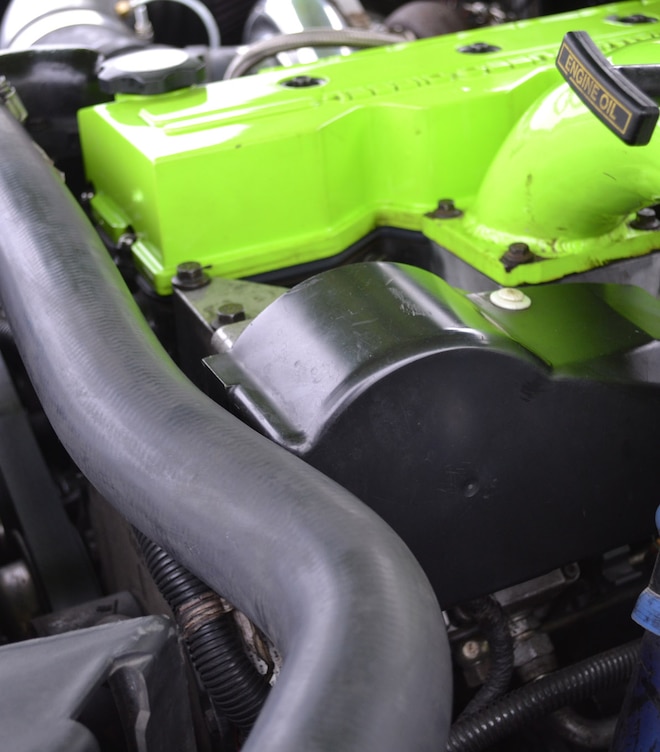 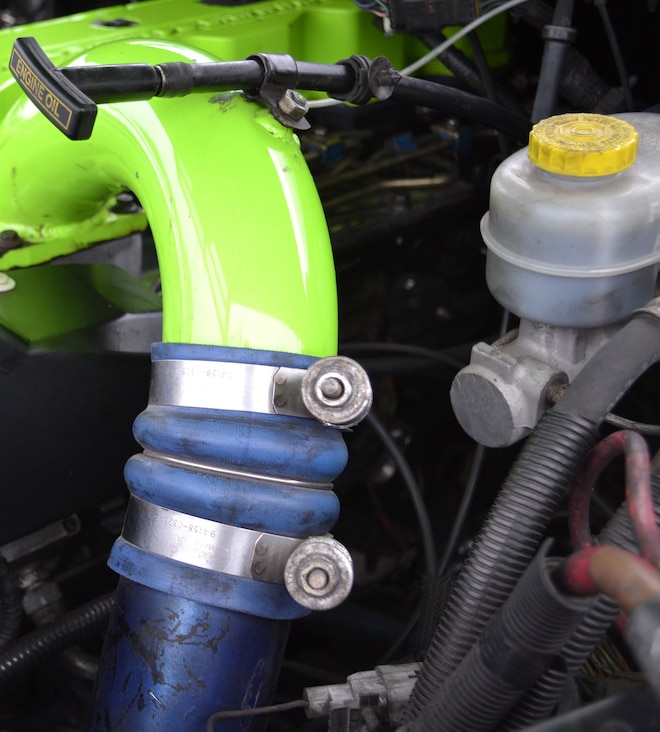 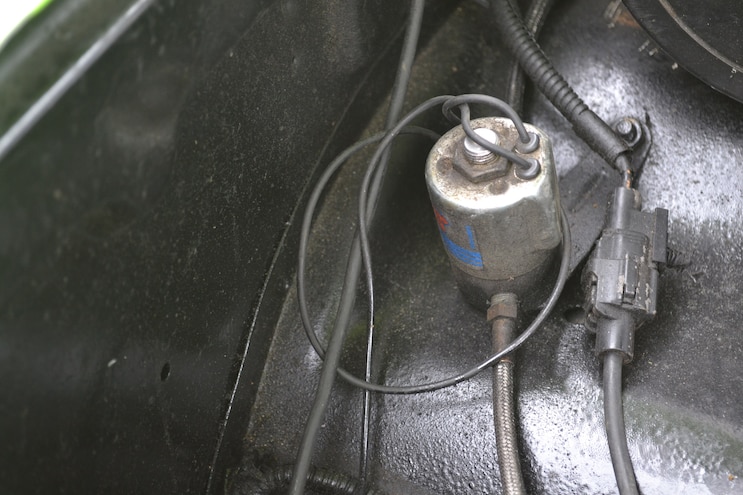 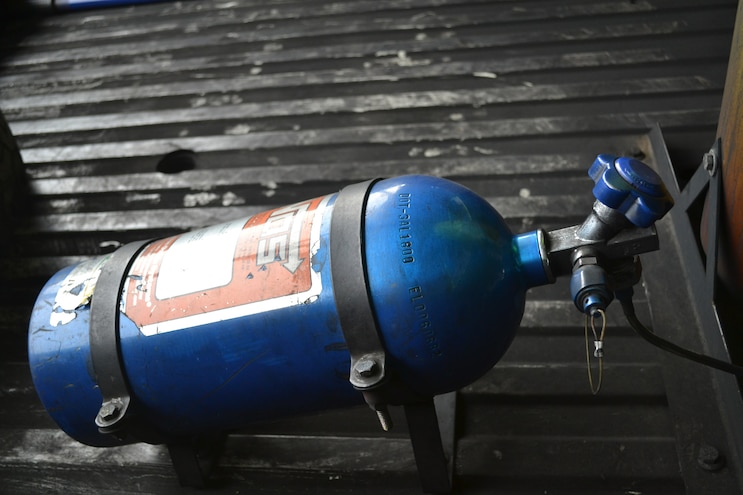 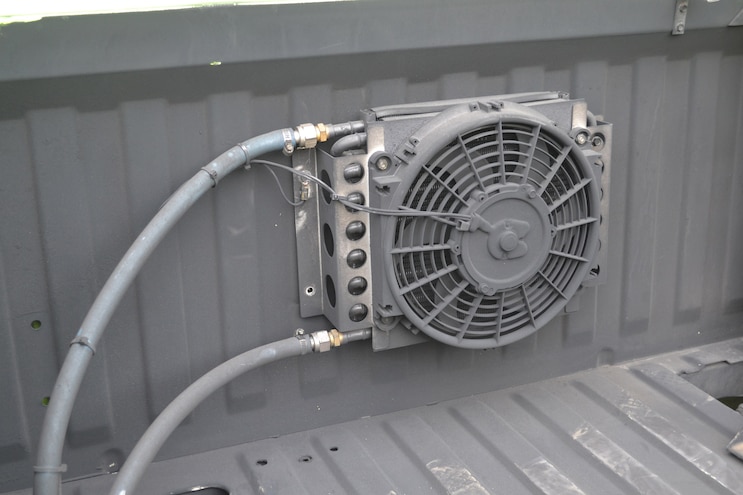 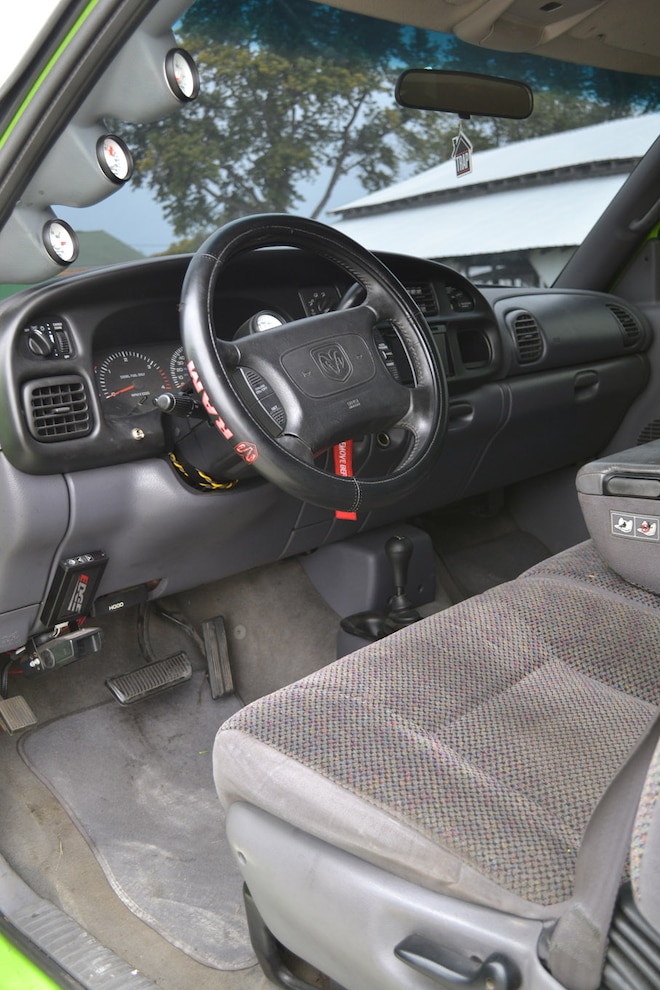 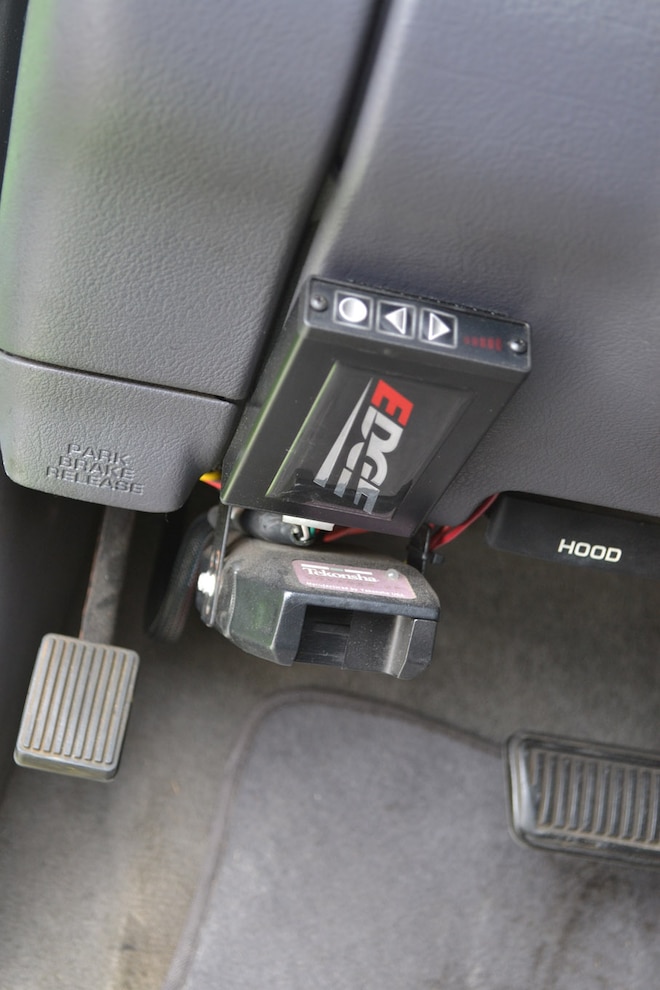 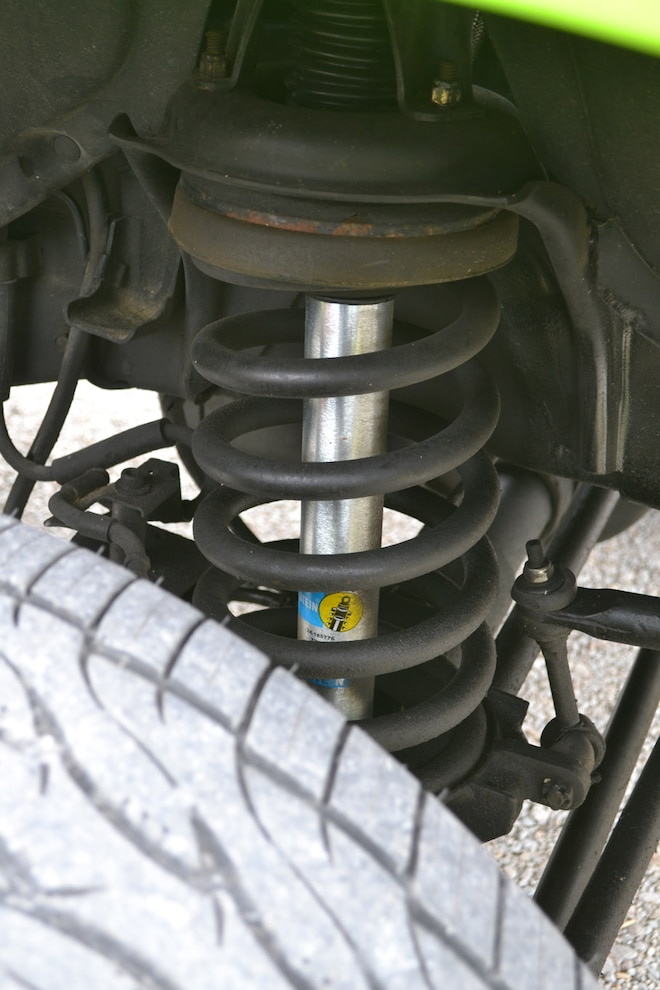 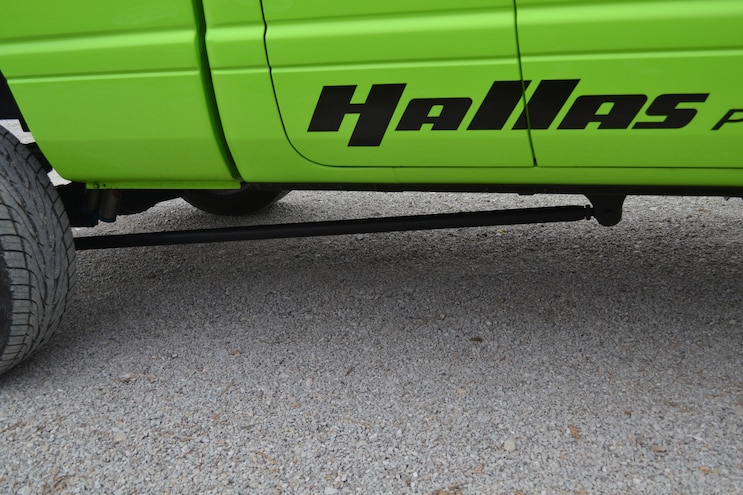 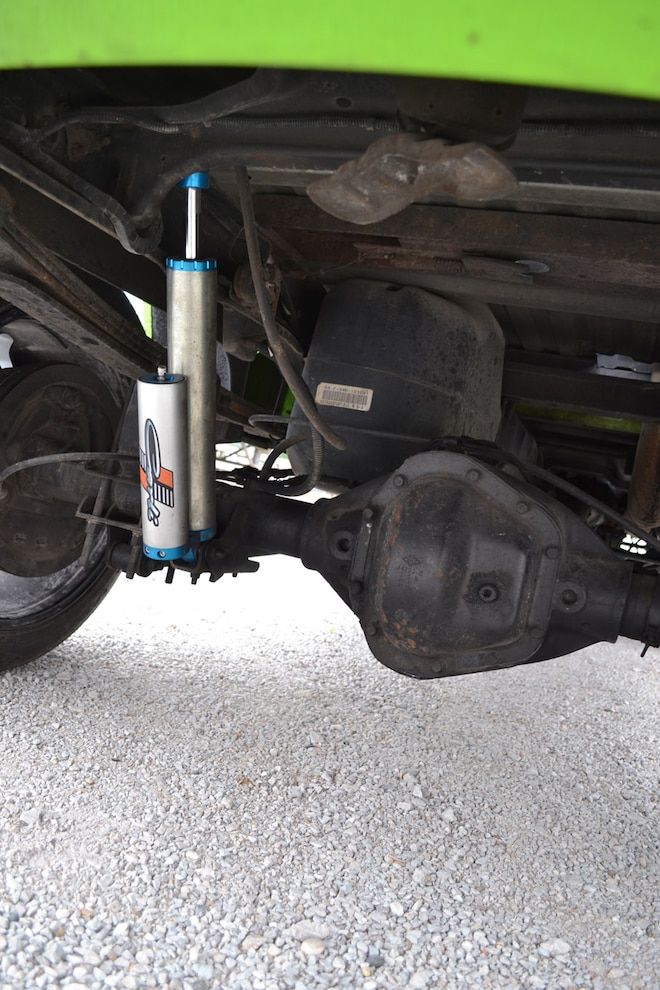 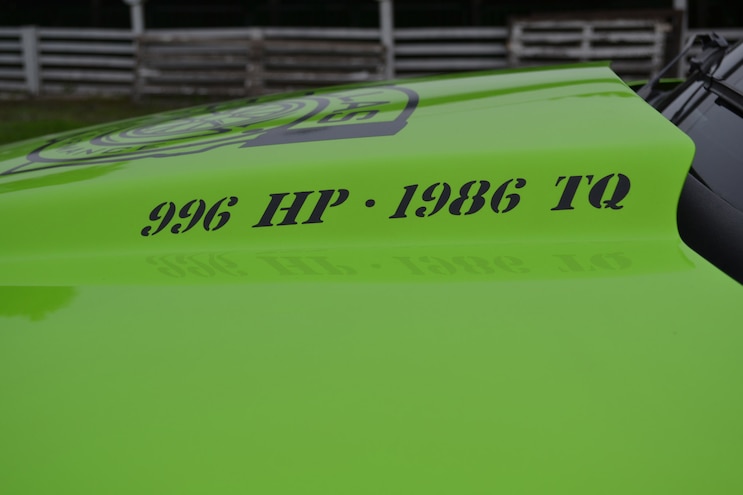 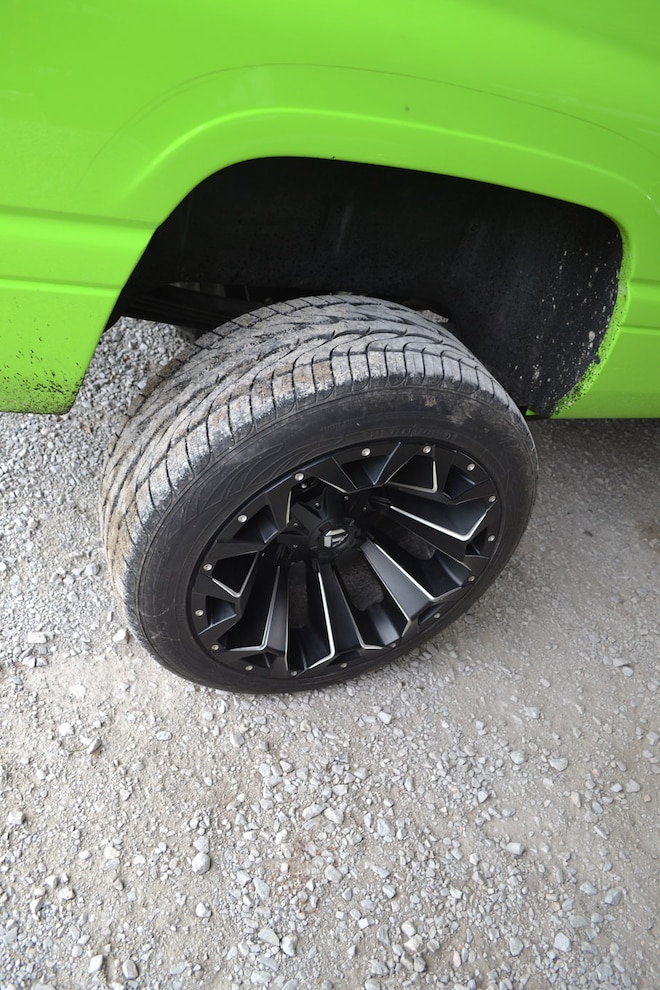 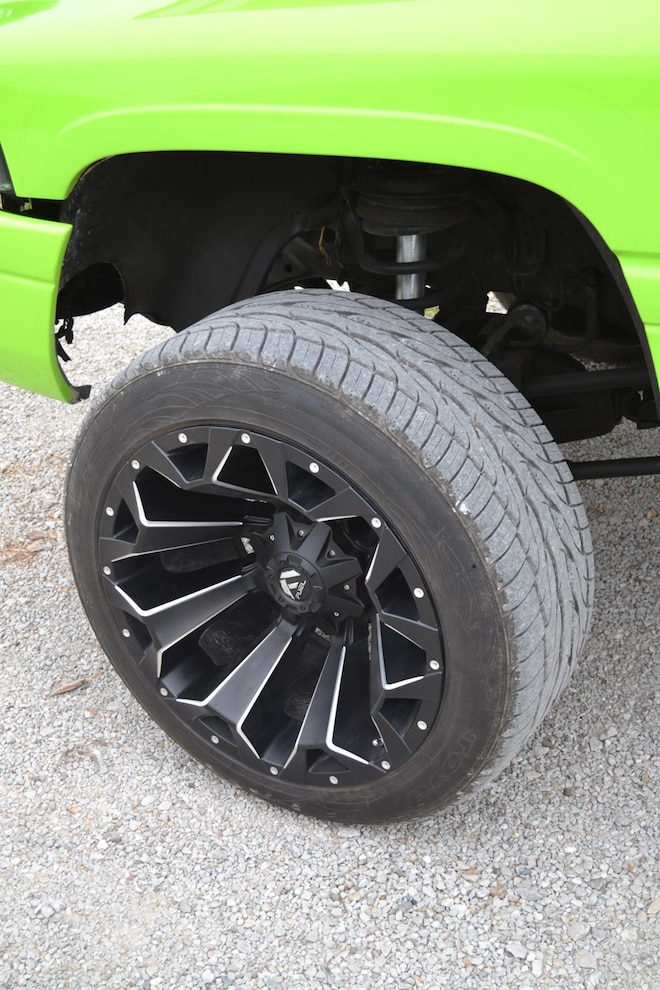 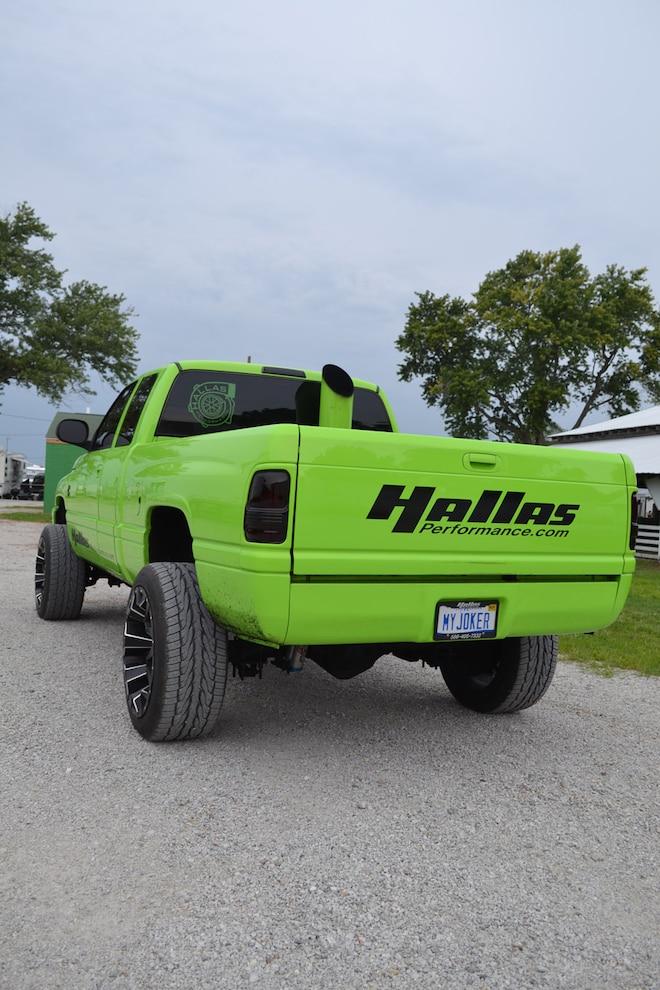 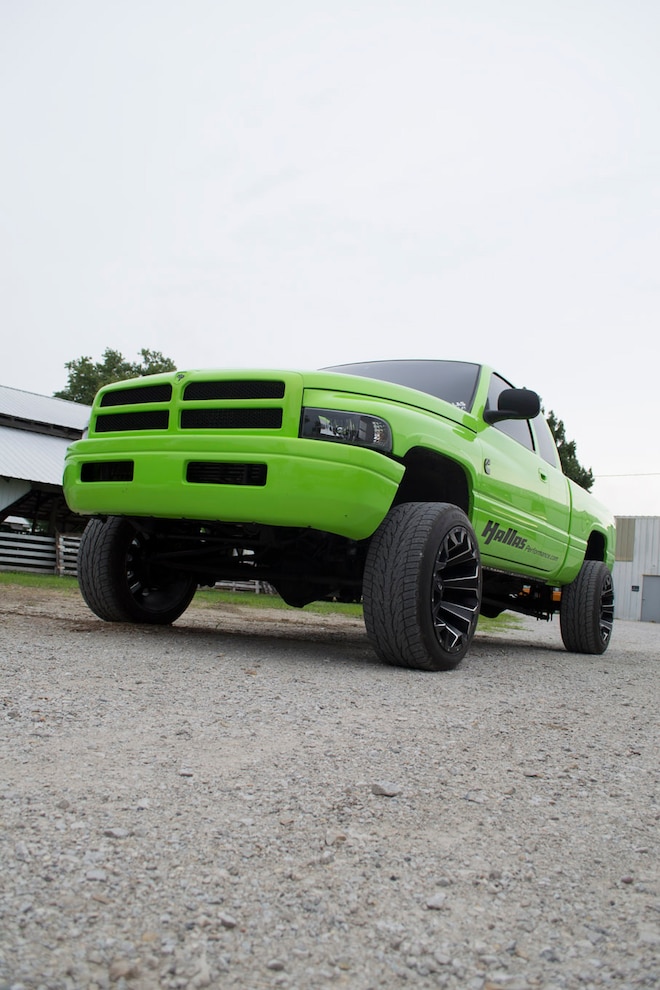 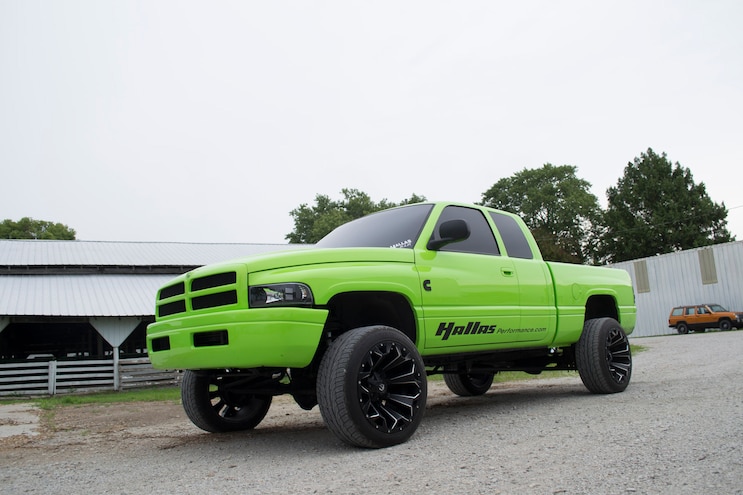 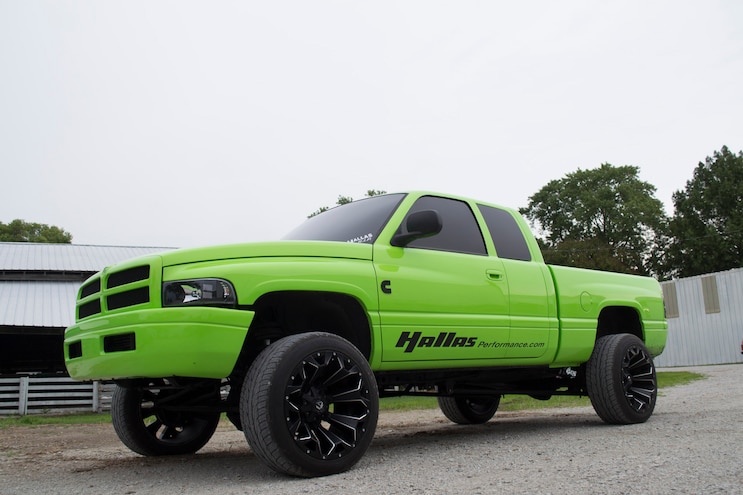