The Gold Star of Truck Building 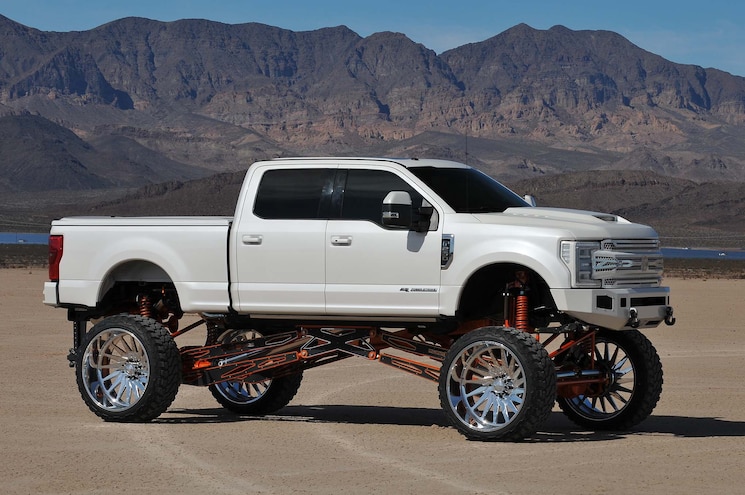 Being branded an influencer is the gold star of the truck culture and essential to a shop or a builder's success. We all know social media is the way we get our name out, and Plan B Fabrication does that daily with its 118,000 followers (and counting). The owner of Plan B, Rob Pique, has often used his personal trucks as rolling billboards, but with an arsenal of more than 70 show trucks coming out of Plan B since the doors opened in 2012, he doesn't even need to do that. Every year, Rob and his crew expect to have their work displayed at SEMA in Las Vegas. In 2015, Plan B only had 1 truck, but in 2016 the team had 4, followed by 7 in 2017, and 13 in 2018.
What originally started as a mud-bogging shop changed with the times and was soon one of the largest custom truck shops in all of Florida. One of the trucks Rob built in 2017 was a Ford F-250 Lariat brought in by a customer. "He wanted a simple white lifted truck with orange suspension parts," Rob tells Truckin. "We completed the truck and had it perfect in three weeks." Although it wasn't Rob's personal taste, the Ford made waves and certainly caught a lot of attention at the SEMA show. 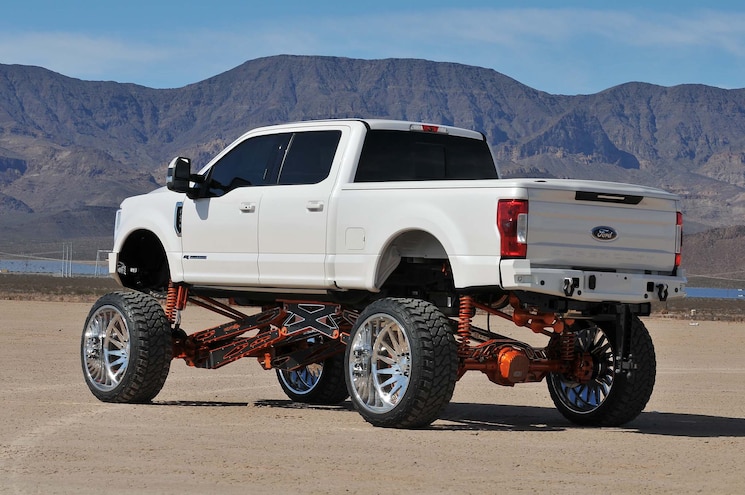 View Photo Gallery | 17 Photos
Photo 2/17   |   2017 Ford F250 Influential Rear 3q
As Rob was putting together a schedule for the next year, the owner came back to the shop and had a different plan. "He wanted to build an SUV for SEMA and no longer wanted the Ford truck," Rob adds. "So it made sense to buy this truck from him." Rob knew the build inside and out, as his hard-working team at Plan B put the entire Ford together piece by piece. Since the F-250 wasn't really the color combo and wasn't as "loud" as Rob preferred, he got right to work making it match his preferences.
The entire shock setup was switched from a 14-inch to a 12-inch to lower the truck and get a proper height so the Ford would be 100 percent functional. The coilovers were relocated to the front side for a smoother ride, creating less stress on the lower mounts. The bypass shock was moved behind the axle for a cleaner appearance and a new sway bar was built. Rob chose to roll with Chassis Unlimited in the rebuild to show off the company's new line of Proform front and rear bumpers. A necessity for all lifted trucks is to add high-quality hooks, so Rob went with the Monster Hooks that neatly attach to the new bumpers. 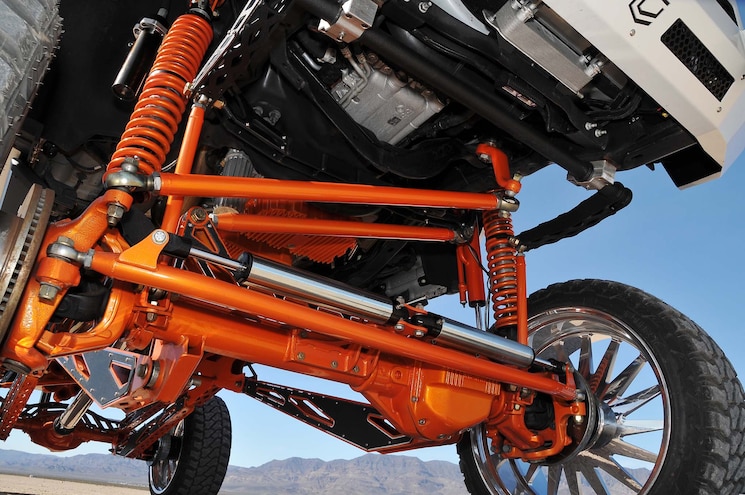 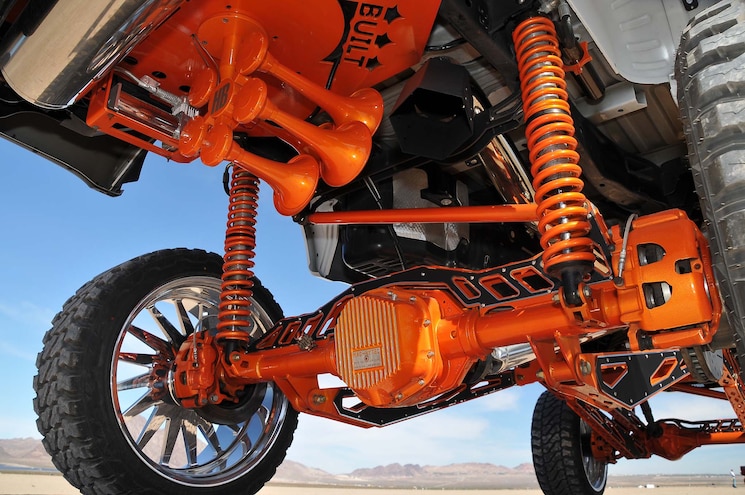 View Photo Gallery | 17 Photos
Photo 4/17   |   2017 Ford F250 Influential Rear Suspension
Rob's team at Plan B already had the Roadwire leather kit on the seats in the Ford, which was pristine so he had no issues leaving that in place. However, the entire sound system was gutted. Rob built a complete stereo system inside the Lariat using Diamond Audio, showcasing its high-quality speakers and subwoofers. Custom door panels were added holding six three-way components and were wrapped to match the seats. Under the rear seats, an enclosure holding four 8-inch Diamond Audio subwoofers was built to finish the truck-rattling sounds. 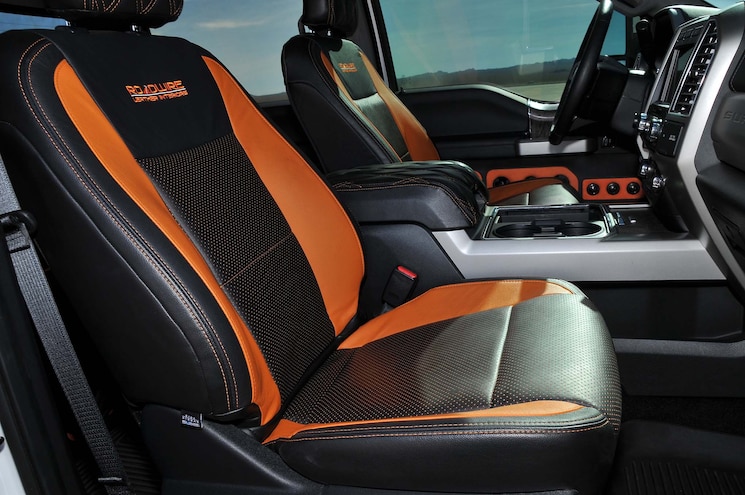 View Photo Gallery | 17 Photos
Photo 5/17   |   2017 Ford F250 Influential Interior
Although the undercarriage and suspension components were powdercoated in straight orange with chrome plating, Rob wanted to break them up with some black overlays. He added stainless mirror to change the appearance and swapped the colors. Once the colors were changed, most of the parts had to be color-matched again to flow symmetrically with the Ford. To complete the update, Jason Sandusky and the guys at American Force were able to get Rob a set of 30-inch American Force Concaved Morphs and wrapped them in 42 Fury tires. 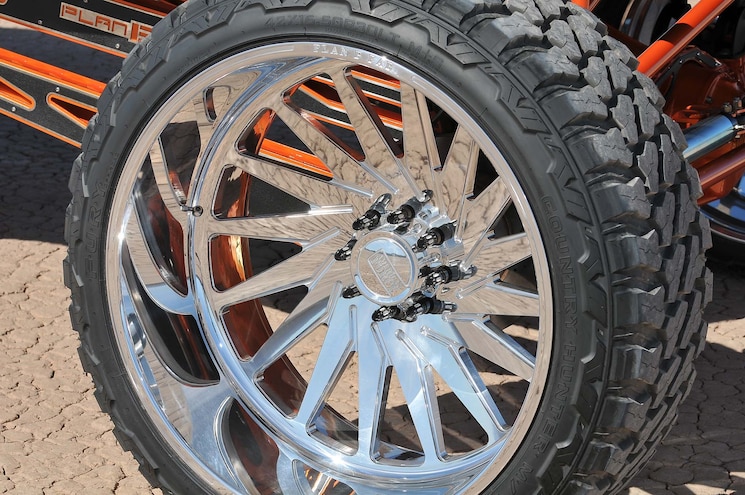 View Photo Gallery | 17 Photos
Photo 6/17   |   2017 Ford F250 Influential Wheel
With 70-plus custom trucks coming out of Plan B in only six years, it's no surprise the shop is at the top of its game. As the owner of the leading shop in Central Florida, Rob takes pride in his work. And with his team of dedicated builders—Ronald "Junior" Black, Tim Taylor, Brendon Thompson, Jason Dvroak, and Travis Schaub—customers' trucks will always be in good hands. Take one look at Rob's personal Ford F-250 and you'll know why he's an influencer in the truck scene. A special thanks goes to Rob's father, Ricky, for everything he taught him and always helping him to be the very best he can be. 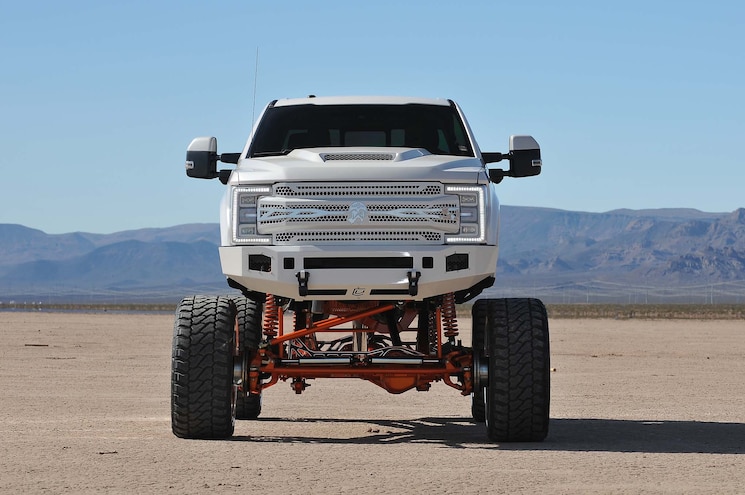