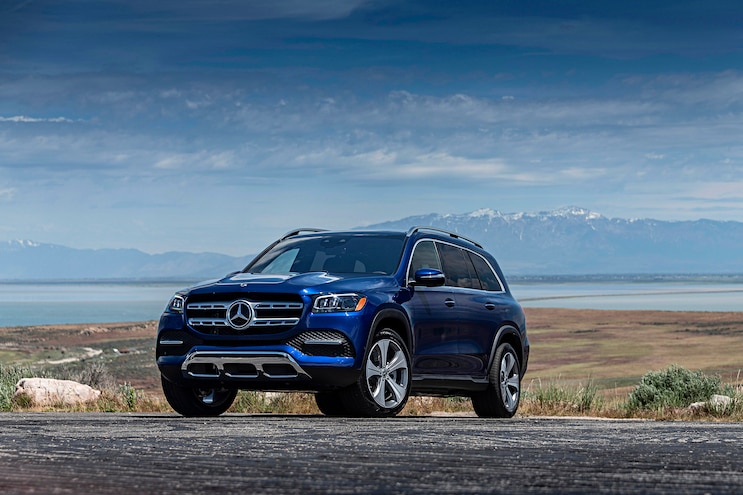 Mercedes-Benz is on a warpath to refresh or redesign its entire SUV lineup within the next year or so, and the latest in the company's utility onslaught is the 2020 GLS-Class. Built from the same bones as the freshly minted 2020 GLE-Class, the GLS features many of the same technological advancements as its midsize sibling, including Mercedes-exclusive E-Active Body Control, MBUX infotainment, and a mild-hybrid powertrain (more on those later).
Of course, all that new tech will come at a cost: $75,200 for the entry-level GLS 450 and $97,800 for the V-8-powered GLS 580, plus $995 for destination and delivery on each. That base price represents an increase of $5,050 compared to the 2019 GLS 450, but Mercedes-Benz claims it's worth it due to a longer list of standard features: a power passenger seat, SiriusXM satellite radio, wireless charging, remote start, a 115V power outlet, active parking technology, and blind spot monitoring and assistance. 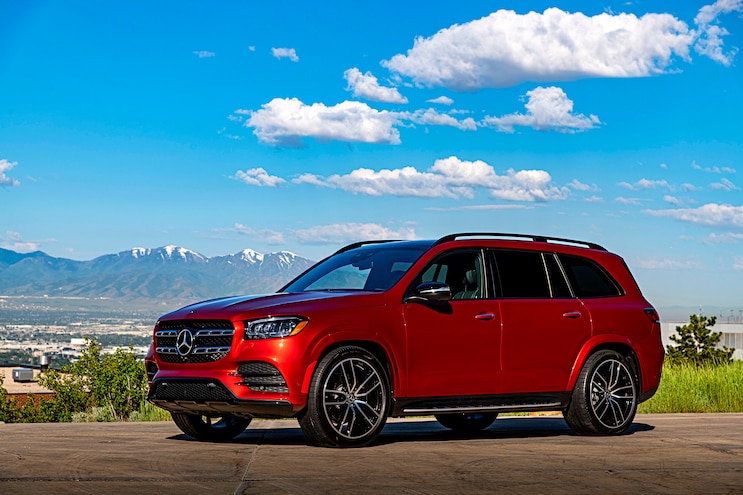 View Photo Gallery | 73 Photos
Photo 2/73   |   First Drive 2020 Mercedes Benz GLS 580
Buttery-Smooth Engines
Of course, the SUV's new, lighter platform and sophisticated 48V mild-hybrid system add some cost that can't be explained away by more standard features. To wit, the 2020 GLS 450 does away with the outgoing model's lovely biturbo 3.0L V-6 in favor of an even sweeter 3.0L turbocharged I-6 and EQ Boost technology. The smooth, turbine-like I-6 makes the same power and torque as its predecessor (362 hp and 369 lb-ft), but over a wider rev range—peak torque lasts from 1,600 to 4,500 rpm, for example. And all 2020 GLS models are augmented by the company's integrated starter-generator (ISG) that can add 21 hp and 184 lb-ft under certain circumstances. Combined power output isn't available, but in our drive, we could noticeably tell EQ Boost helped the GLS 450 step off smartly from a dead stop, and, at speed, the engine and its nine-speed automatic collaborated well to provide good merging and passing power.
The energetic GLS 580 is even more impressive. Its twin-turbocharged 4.0L V-8 produces a staggering 483 hp at 5,500 rpm and 516 lb-ft between 2,000 and 4,000 rpm on its own, with that EQ Boost system adding the same power and torque when appropriate. Although the GLS 450 gets out of its own way with ease, the GLS 580 practically shoves air molecules aside in its quest for rapid transit. Adding 25 mph to your speed is a twitch of the toe away, and the smooth rush of turbocharged torque is addictive—we regularly found ourselves decelerating to 45 mph on country roads just so we could explode forward to 90 mph, imitating an aggressive freeway merge or passing situation. 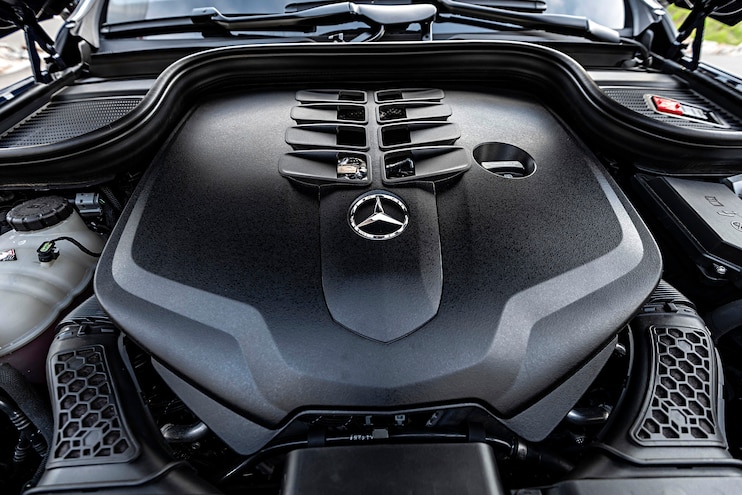 View Photo Gallery | 73 Photos
Photo 3/73   |   40 First Drive 2020 Mercedes Benz GLS 580
The reality is both engines are willing companions for daily driving, with EQ Boost helping smooth out any off-boost scenarios from the turbochargers. In fact, EQ Boost's whole ethos is to iron out the engine—it's most impressive pulling away from stoplights, when the electric motors inch the vehicle forward even before the engine has restarted from its auto-idle stop slumber. The system also adds or subtracts torque on gear changes, helping the GLS feel like it's pouring itself down the road. The future of luxury is electrification, and we're on board as long as all the systems are this silky and transparent.
So, which motor is best? If rich Aunt Myrtle was buying, it'd be the bombastic GLS 580 all the way. But if we were footing the bill, the much cheaper, I-6-powered GLS 450 is as smooth and pleasant as its V-8 sibling, at a savings of more than $20,000.
Magic Carpet Ride
Besides, saving cash on the engine would free up the budget for the 2020 GLS-Class' other incredible secret weapon. That 48V electrical system that powers EQ Boost hybridization can also be used to actuate E-Active Body Control (E-ABC), the last word in suspension smoothness and response. E-ABC builds on its predecessor, the "e"-less ABC, offering hydropneumatic adjustment of the GLS' standard Airmatic air springs depending on driver-selected suspension settings. E-ABC also uses the forward vision cameras to scan the road ahead, and if it detects rough surfaces or potholes, it will actively soften each individual wheel the moment it traverses over the obstacle, preserving ride comfort without compromising body control. 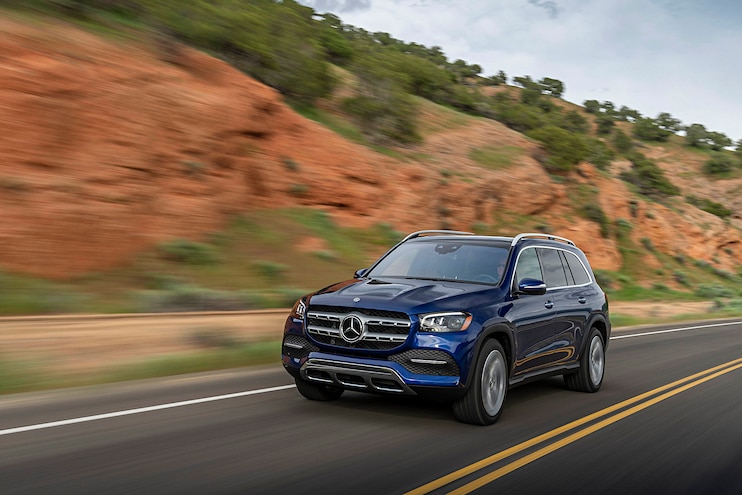 View Photo Gallery | 73 Photos
Photo 4/73   |   First Drive 2020 Mercedes Benz GLS 450
Furthermore, E-ABC incorporates a Curve mode in the drive selector, which actively stiffens the shocks outboard of a corner. Believe it or not, not only does the Curve function eliminate body roll, it actually leans the car into a corner like a motorcycle. Although the sensation is a bit odd at first, it quickly becomes familiar—Mercedes says it reduces driver fatigue and passenger motion sickness on twisty roads.
Specific package and option prices haven't yet been announced for the GLS, but E-ABC is undoubtedly going to be an expensive option. On the GLE 450, E-ABC demands $6,390 more than that vehicle's optional Airmatic air suspension, which comes standard on the GLS, as mentioned earlier. Six grand is a lot for a suspension package, but it might be worth it solely if it prevents your kids from yakking on your fancy leather, to say nothing of its borderline-witchcraft ride comfort.
If you just can't stomach the thought of spending six large on the technology, the standard Airmatic suspenders are just fine at what they do—in Comfort mode, they swallow bumps at the expense of some body roll, while Sport provides a bit better response by sacrificing some ride comfort. Still, both modes are two sides of the same coin—this is a large German SUV, after all, so it will never be a corner-crushing canyon master, nor will it be a wallowing, floaty thing. 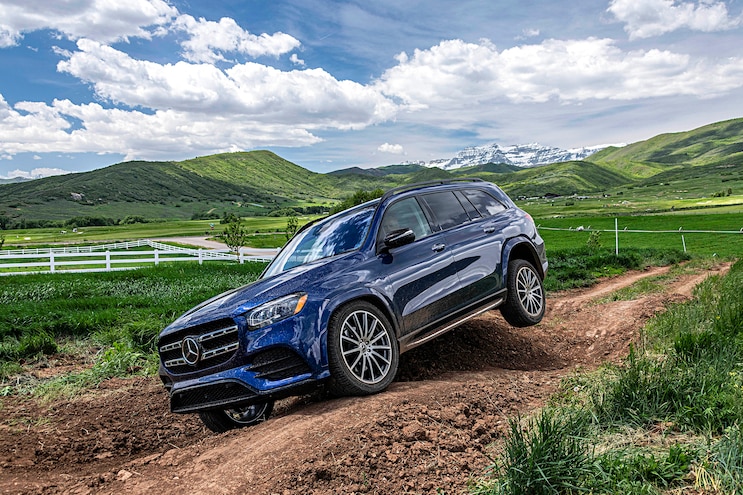 View Photo Gallery | 73 Photos
Photo 5/73   |   First Drive 2020 Mercedes Benz GLS Off Road
Just Gel ndewagen Things
Back in 2016, Mercedes-Benz altered its SUVs' nomenclature, replacing the GL with the GLS, the ML with the GLE, and the GLK with the GLC. You might notice that "G" appears in every model's name, because Mercedes would like you to think of the world-conquering box-it-came-in G-Class whenever you see a three-pointed star on an SUV.
Of course, nothing in the Benz lineup is as capable off-road as a G-wagen, but the GLS does its best impression thanks to standard 4Matic all-wheel drive, with a multiplate center clutch that varies torque to the front axle between 0 and 100 percent. Available on the GLS 580 is an even more sophisticated transfer case with a dedicated reduction gear, aiding in low-speed off-road driving.
This transfer case option also includes an even more aggressive off-road setting for the drive mode selector, and when bundled with E-ABC, it also includes individual wheel articulation, aiding the driver when traversing a ditch. E-ABC also includes a free-driving function—if the vehicle gets stuck in a drift or sand dune, the GLS will bounce on its suspension in order to pile sand or snow underneath the tires and free itself.
We sampled the GLS 580's off-road package on a surprisingly difficult course that Mercedes mapped out in the mountains above Salt Lake City, and we were very impressed with its composure, ground clearance, and ease of maintaining forward progress. The low-range transfer case works as advertised, and we think EQ Boost helps when traversing large obstacles by providing consistent torque to the wheels. Very few GLS buyers will bring their six-figure SUVs to the Rubicon Trail, but our experience on the twisting, off-camber trail proves it will be able to handle the occasional camping trip just fine. 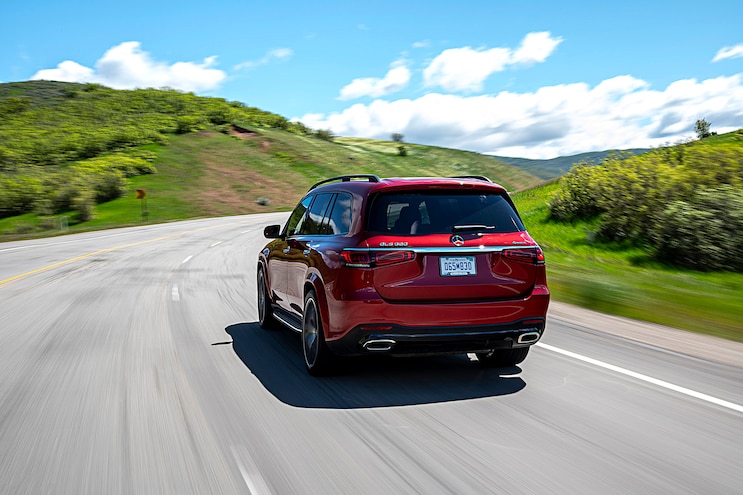 View Photo Gallery | 73 Photos
Photo 6/73   |   First Drive 2020 Mercedes Benz GLS 580 Rear
The S-Class of SUVs
In that aforementioned renaming scheme, the GL became the GLS to position itself at the top of the Mercedes-Benz SUV lineup. As such, Mercedes loves to call it the S-Class of SUVs, which is a fair nickname if the SUV is well-optioned. Almost all our testers came stocked with premium leather and wood trim, with heated and cooled front and rear seats and multicontour massaging front seats. Heated seats and separate charging ports are now an option for third-row passengers, and, commendably, space back there is adequate for full-grown adults.
In addition to the sumptuous leather and fatigue-easing massaging seats, our testers were also equipped with the Mercedes Benz User Experience (MBUX) infotainment system, optimized with the optional Interior Assistant package. Interior Assistant uses cameras and sensors placed in the headliner to detect whether the driver or passenger is reaching for the touchscreen, which then allows it to bring up the appropriate controls. For example, if a passenger reaches for the "Comfort" button on the infotainment display, MBUX will default to settings for the passenger side of the vehicle.
MBUX also includes "Hey Mercedes" voice control functionality. We didn't like the system as much in this application as we remember from the GLE, which seemed to understand our commands much better. The GLS' larger interior might perhaps lend itself to some imperceptible boominess that interfered with our voices. However, MBUX can also be controlled via the touchscreen, a trackpad in the center console, and thumbpads on the steering wheel, making it much easier to navigate. 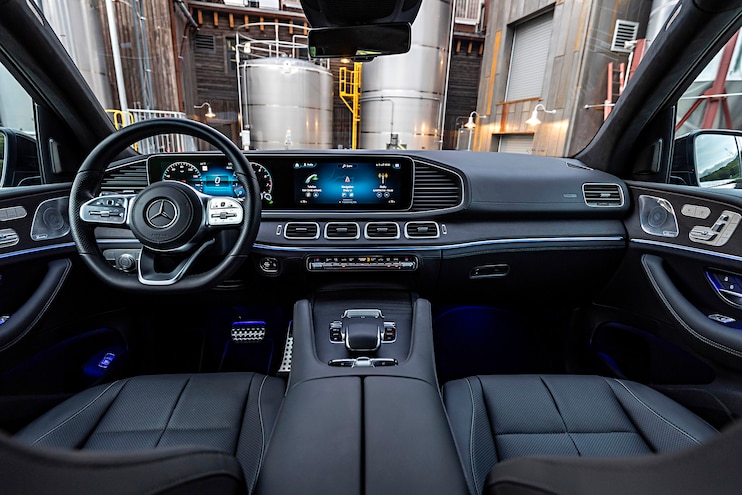 View Photo Gallery | 73 Photos
Photo 7/73   |   First Drive 2020 Mercedes Benz GLS 580 Interior
The GLS is now available with an impressive Executive Rear Seat Package that ditches the second-row bench for a pair of bucket seats and a large center console. That console provides a docking station for a tablet loaded with MBUX controls, allowing VIPs in the back to view vehicle settings, manage audio, and more.
Eye of the Beholder
To our eyes, the 2020 Mercedes-Benz GLS is more graceful and attractive than the vehicle it replaces. It follows the company's current melted-candy styling language, with large and uninterrupted swaths of sheetmetal from front to rear. Swoopy headlamps incorporate new LED accents, and the GLS can be had with either a standard or an AMG-style front end, the latter incorporating larger (though still simulated) front bumper openings. Truth be told, the front bumper is the GLS' largest, and perhaps only, styling misstep. Whether standard or AMG-style, those simulated openings do a terrible job of imitating real air vents, blocked off with obvious black plastic.
The side view is a traditional two-block SUV shape, with very few extraneous details to distract or interrupt the 2020 GLS' styling. The look is ever so slightly boring, but it will undoubtedly age very, very well. Its smooth appearance is more than just cosmetic, as the GLS now features a 0.32 coefficient of drag, down from 0.35 on the 2019 model—and very impressive for a fullsize SUV.
Around back, the big Benz gets narrow horizontal taillamps that might as well have been plucked straight from the back of the Mercedes-AMG GT coupe. And surprisingly, they work as well here on the bluff rear end of the GLS as they do on that low-slung sports car. There's a surprising amount of tumblehome (the inward tilt of the greenhouse compared to the lower body), and, matched with the rounded bodysides, the rear of the GLS looks athletic, planted, and sporty.
Inside, the GLS gets Benz's now-common flatscreen infotainment/instrument display consisting of two 12.3-inch widescreen elements. Both are extensively reconfigurable, and dash graphics are beautiful and modern. Not everyone loves the floating-tablet look, but we think Mercedes does it better than most. Elsewhere in the interior, the Benz gets off-road-optimized grab handles on the center console, excellent materials throughout (even down low, where your fingers rarely touch), and smooth and graceful styling that matches the exterior. 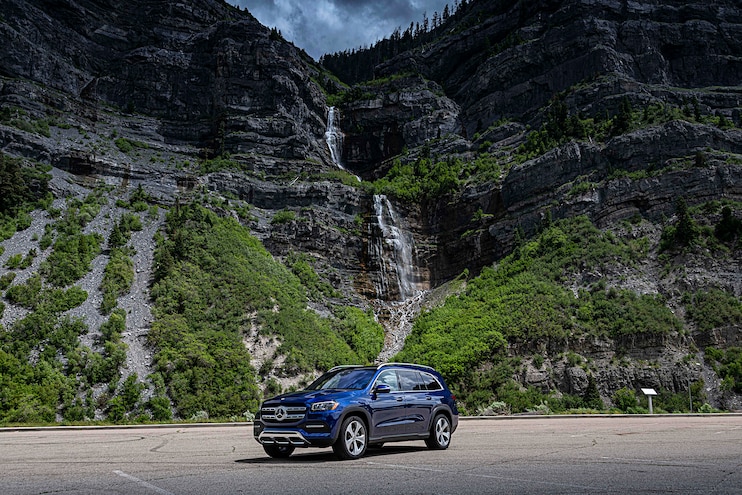