A Dedication With Style and Grace 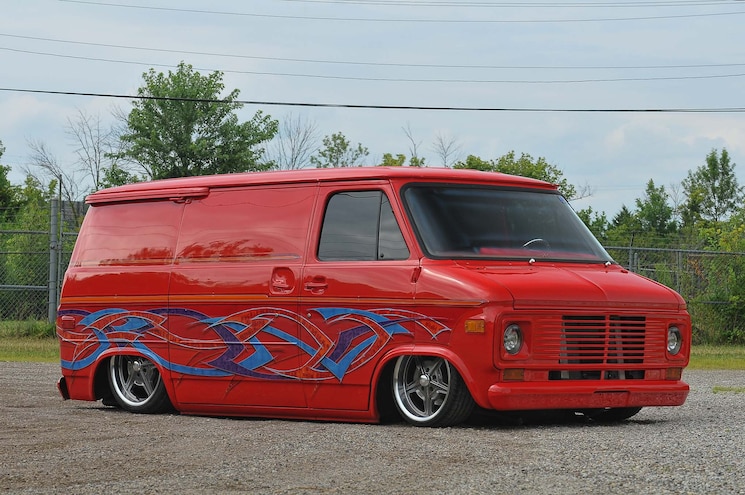 Cody Reynolds is the youngest of Bill and Vangie Reynolds' three children. He and his brother Bobby were especially close to their father when they were growing up. "My dad belonged to a van club called Budman Vans and would spend a ton of time in the garage," Cody tells Truckin. "It was there that I first learned how to turn a wrench." Vans were integral to the Reynolds family. In fact, Cody tells the story like this: "I was conceived on April Fools' Day at a van show."
In 2009, Bill was diagnosed with cancer and Cody got the idea to purchase a van. With the help of his brother and father, he created something that would replicate his childhood. Searching for a van can be quite difficult, but with the help of his friend Chad Luellen, Cody found an '83 Chevy G20 that had been sitting in a storage container—since 1986. When Cody went to take a look at it, he discovered the condition wasn't great and tons of parts were missing. For $700, he was able to take the project home for the Reynolds boys to start on. The entire front end of the van was missing, so the first step was returning it to stock. 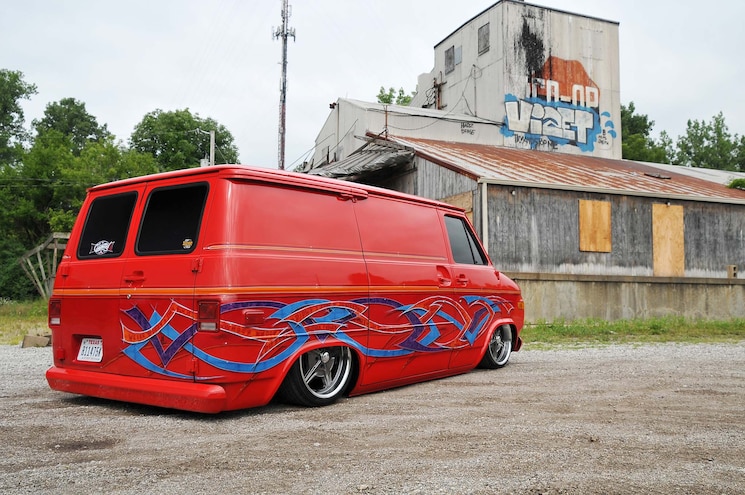 View Photo Gallery | 15 Photos
Photo 2/15   |   1983 Chevy G 20 Night Stalker 2 Rear 3q
Cody located a '73 van he intended to use as a parts van from an old fire department. The front end, doors, and bumpers were all installed to replace the missing pieces. The original 305 in the '83 was OK, but it had a bunch of emissions additions, so the 350 from the parts van was installed, with Bobby and Bill adding a cam and aluminum intake. Cody was next up to bat with the suspension. Up front, he had to Z the front clip of the unibody. The front suspension was brought to Chad Luellen, who added custom control arms and narrowed both sides 2 inches. The transmission crossmember had to be rebuilt to accommodate the 2 -inch drop spindles. A two-link with a Panhard bar was added to the rear with bags over the axle, and a ton of sheetmetal work was done to the front wheel tubs so the van would lay out. 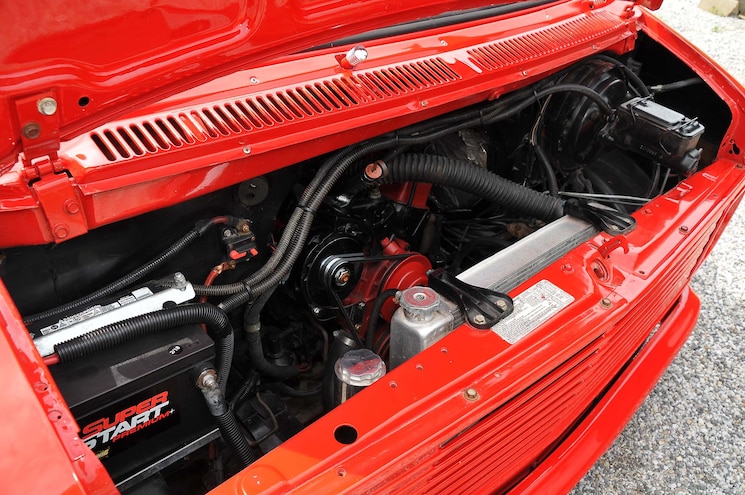 View Photo Gallery | 15 Photos
Photo 3/15   |   1983 Chevy G 20 Night Stalker 2 Engine
Once the suspension was complete, Bill's cancer had progressed and it wasn't long before he could no longer help Cody with the van. Shortly thereafter, Bill passed and Cody and Bobby decided the way to pay homage to their father and show him their abilities would be to keep going with the van. Cody brought the Chevy to Patrick Reid of Madd Concepts in San Leon, Texas, for paintwork. And though Cody originally wanted to paint the van a solid red, Patrick wanted to incorporate a more personal touch after hearing the story about the build—and his graphic skills are tough to beat. 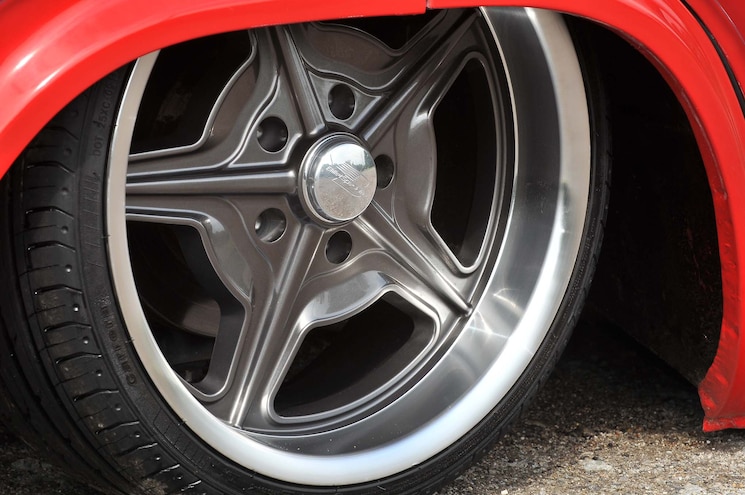 View Photo Gallery | 15 Photos
Photo 4/15   |   1983 Chevy G 20 Night Stalker 2 Wheel
Patrick asked Cody what his father had said over the years that had stuck with him. He added PPG Torch Red along with multi-colored graphics, and inside the graphics were sayings from Bill that Cody remembered from his childhood. The next step was adding a custom interior. With the help of Patrick, the entire cabin was coated in the same red. A custom console was added from the rear to the dashboard, and the last step was ensuring a bed was installed in the back based on his birth story.
Although his father wasn't physically there for the final touches, Cody knows he was there in spirit. Cody named the custom van Night Stalker 2 (his father's van was the original Night Stalker). The Reynolds boys have completed the van and taken it to shows throughout the country, displaying their building prowess along with their pride. An urn with Bill's ashes was added to a custom-carved wooden van that travels with Cody at all times to carry his memory and heart. 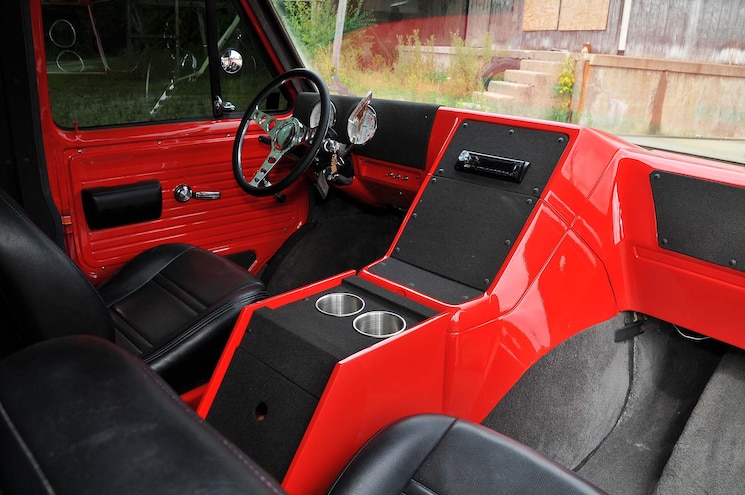 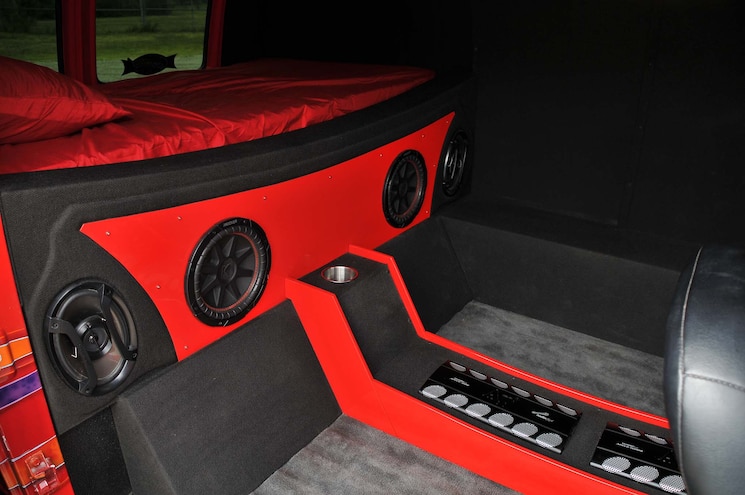