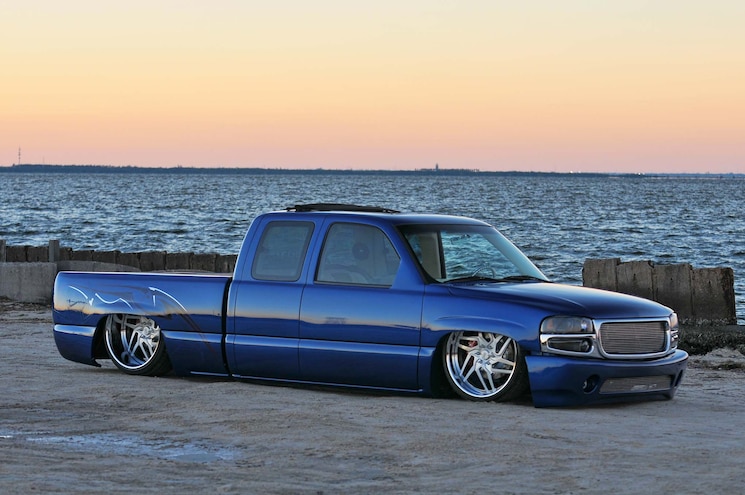 One of the strongest bonds a man can have is with his mother. As young boys, we are taught about the trials and tribulations of life from our mothers. We are even judged on how we love, respect, and treat others based on how we treat our mothers. The bond between Wilkey Pierre and his mother has always been strong and formed his life in the most positive way. Originally from Haiti but residing in South Florida, Wilkey, affectionately known as Wilk, grew up in the heart of the lowrider culture and even belonged to one of the most popular car clubs.
Wilk's good friend Matt Daisimile, who was always helping him build his custom lowrider car, owned a custom '00 GMC Sierra with air ride and a Denali front end. During the lowrider build, Wilk's passion began to shift to a different field. Wilk worked out a trade with Matt for the GMC and took the new truck to his first truck show in Florida. At that show, a random guy walked up to Wilk and said his truck was nice but it was the same as all the other trucks around. Once Wilk arrived home, he told his wife he was going all in. 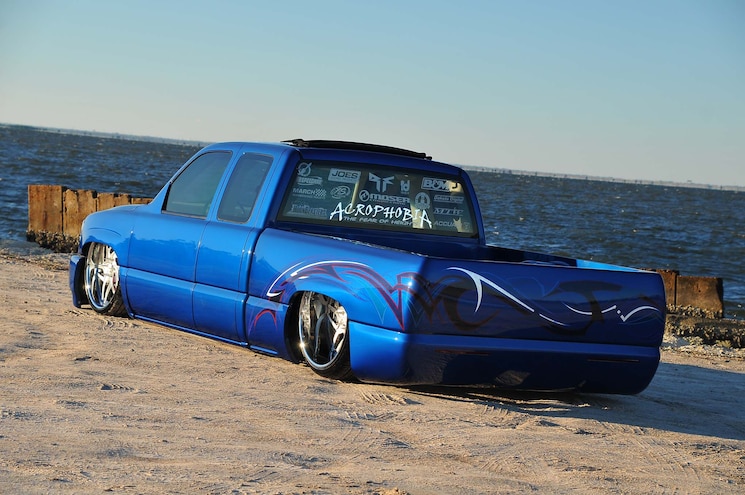 View Photo Gallery | 19 Photos
Photo 2/19   |   2000 Gmc Sierra Blood Pressure 06
The first step was tearing out the interior and seats from the truck—that way he wouldn't be inclined to drive it, guaranteeing the work remained constant. He used a good many issues of Truckin to get ideas of how he was going to change the interior. Wilk sketched out ideas on door panels and dashes in AutoCAD. Once he got what he wanted, he contacted Scott Refice and, together, they added a full custom interior to the GMC. Once the interior was laid in, Wilk and his good friend Edward Larry built a subwoofer box and showed off their skills of "curfing" wood, which is the process of curving wood without fiberglass. 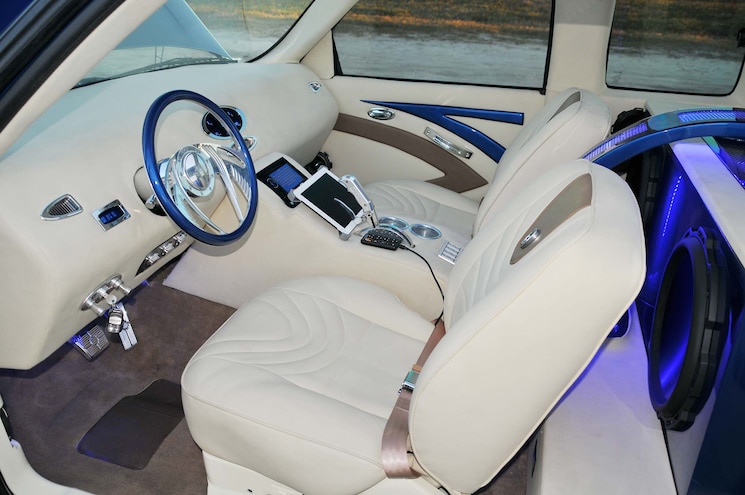 View Photo Gallery | 19 Photos
Photo 3/19   |   2000 Gmc Sierra Blood Pressure Interior
Once the interior was completed, Rockstar Kustomz performed a full stock floor body drop to bring the GMC to the ground. Now that the height was perfect, Wilk began overhauling the entire motor. A friend Wilk worked with had a nonworking LS motor he was going to junk, so Wilk made an offer and took the motor to the extreme by tearing it down and reassembling the entire thing with some serious power. A larger cam, larger valves, and flat-top pistons make up the internals, and the throttle body was ported and polished with the help of Edward Larry. 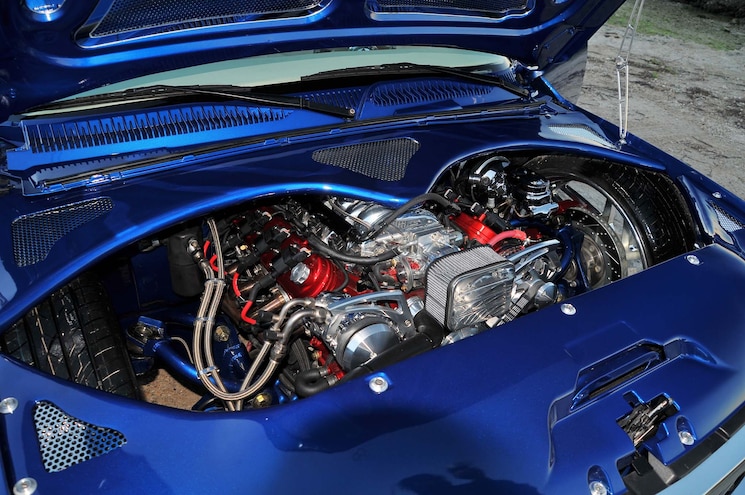 View Photo Gallery | 19 Photos
Photo 4/19   |   2000 Gmc Sierra Blood Pressure Engine
Around this time, in August 2014, tragedy struck and Wilk's mother, while vacationing in Haiti, died suddenly from blood pressure complications. Completely devastated, Wilk decided to dedicate the rest of the build to his mother. He wanted to incorporate some of her favorite things to serve as a reminder of what she meant to him. His next step was contacting Richard Edwards to add a custom red paint to the motor because, as Wilk puts it, "The motor acts like the heart of my truck." Once the Kandy Red with metallic gold symbolized a good healthy heart in the GMC, attention was turned to the body and paint.
Edward and Wilk shaved the body clean of mirrors, door handles, and everything else that seemed unnecessary, and then Richard used a '17 Mustang Blue Wilk chose because it was his mother's favorite color. His friend Mikey from Pinstripe By Mikey was brought in for some lowrider-style graphics, leafing, and pinstripe that subtly make the Sierra stand out. Wilk purchased much larger wheels than what originally came on the Sierra, so the truck needed a suspension upgrade. 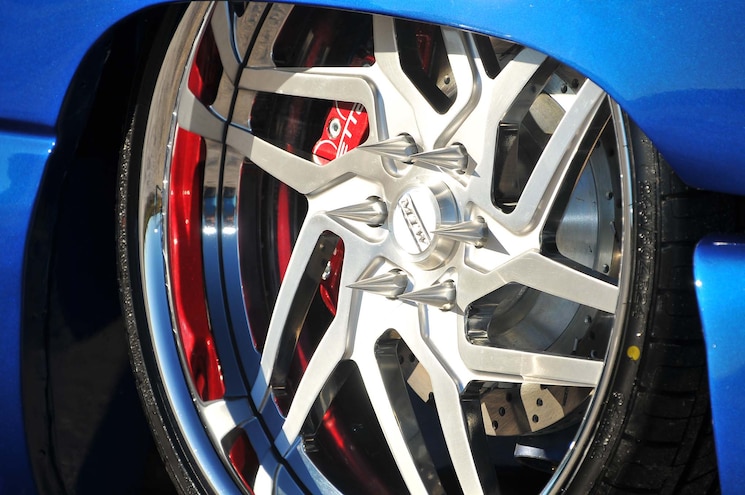 View Photo Gallery | 19 Photos
Photo 5/19   |   2000 Gmc Sierra Blood Pressure Wheel
A front and rear NFamus suspension kit was purchased, and his good friend Bryton Prevatt installed all the parts, making sure the new 24-inch wheels wouldn't camber. The rear end was shortened by Jimmy's Rod and Customs to make the 24x12s with 4-inch backspacing fit perfectly. Some final touches were added by Wilk and Anthony Agliano, such as building an underhood engine cover out of fiberglass that was inspired by old-school hot-rod styles.
Although Wilk's mother was never able to see the final product, he knows she's with him and is very proud of his success. It's not common for someone to start their passion in a completely different field and then become so successful in the truck culture. Wilk earned respect along the way by asserting his knowledge and hands-on work through every process that makes Blood Pressure a breakout success. It may have taken a full three years for his dream to come to fruition, but as it's often lamented, you never rush perfection. 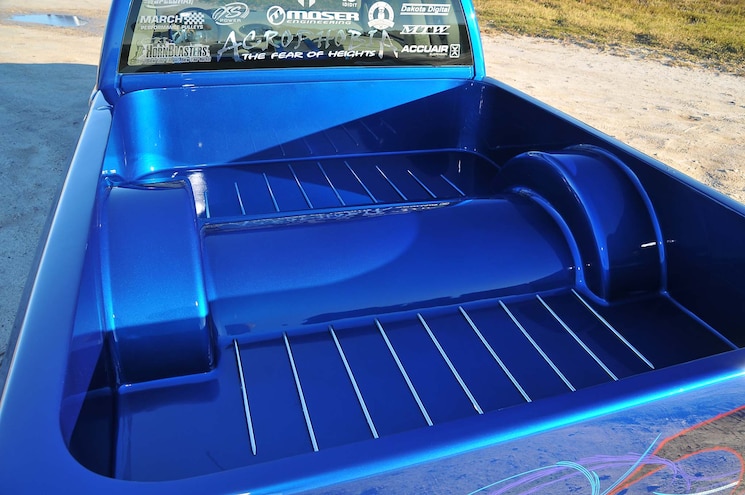