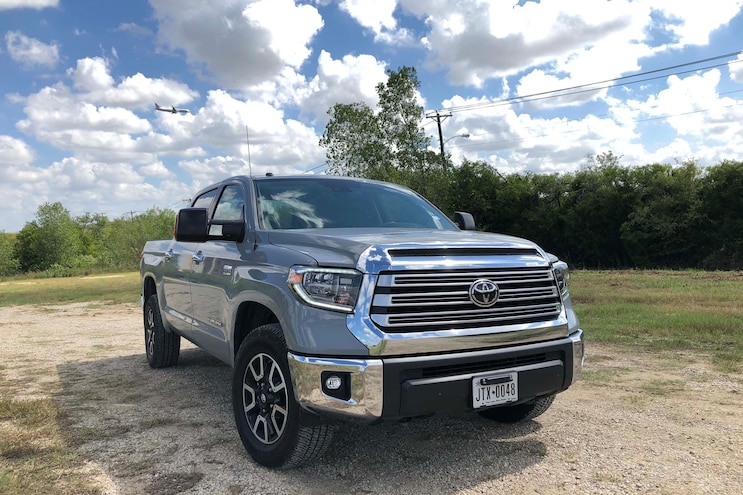 If ever there were a vehicle in need of an overhaul Toyota's Tundra would be it. With its last major redesign in '07 and two minor facelifts in '14 and '18, Tundra is currently the oldest of the -ton pickups with no indication of that changing soon. Despite this, the truck has aged remarkably well. To reacquaint ourselves with the largest Toyota, we recently spent two weeks traversing the company's new stomping grounds in Dallas.
Our ride was an upper-midgrade Limited CrewMax with the TRD Off-Road package. Adding the TRD package brings unique 18-inch wheels, Bilstein shock absorbers, and underbody skidplates. Tires, unfortunately, are rather underwhelming Michelin all-terrain units not worthy of the all-terrain designation. Under the hood was Toyota's powerful iForce 5.7L V-8 engine, which is backed by a six-speed automatic transmission. We've been fans of this drivetrain since its introduction and it continues to impress. With the available 4.30:1 axle gears and 401 lb-ft of torque on tap, the Tundra zips away from stoplights and passes on the highway with ease. And it has a glorious exhaust note to boot. If there were a disappointment to be found it lies in the six-speed automatic transmission. In a world where 8- and 10-speed boxes are standard, the 6-speed and its shift patterns and quality feel a bit archaic at times. 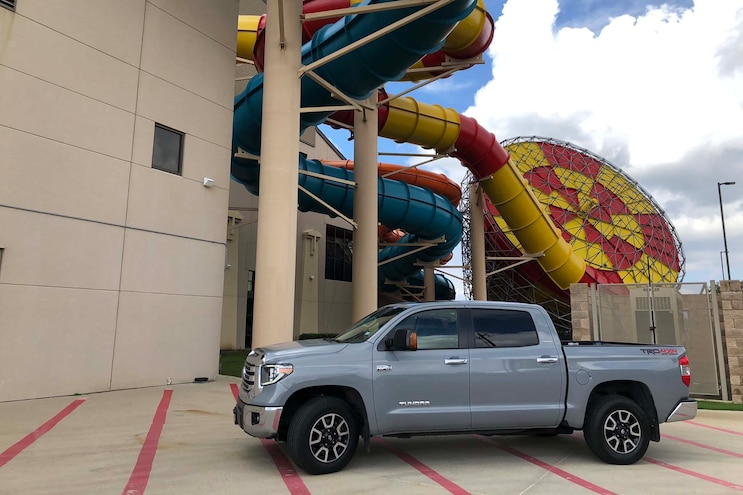 View Photo Gallery | 10 Photos
Photo 2/10   |   Daily Driven 2018 Toyota Tundra Limited Side View
Inside, the first thing we notice is just how massive the cab is in the CrewMax. While the competition is touting larger cabs as a selling point in their new models, Toyota gave this to Tundra a decade ago. Rear seat legroom is phenomenal, and the rear seats fold up providing a great solution for hauling cargo that one wouldn't otherwise want exposed in the bed. And we still love the Tundra-exclusive retractable solid rear window. Instrumentation, HVAC, and infotainment controls all feel a bit dated but are placed within easy reach and are intuitive. The truck still lacks in the infotainment arena, as Toyota's Entune system has to be our least favorite from both an ease-of-use and functionality standpoint. 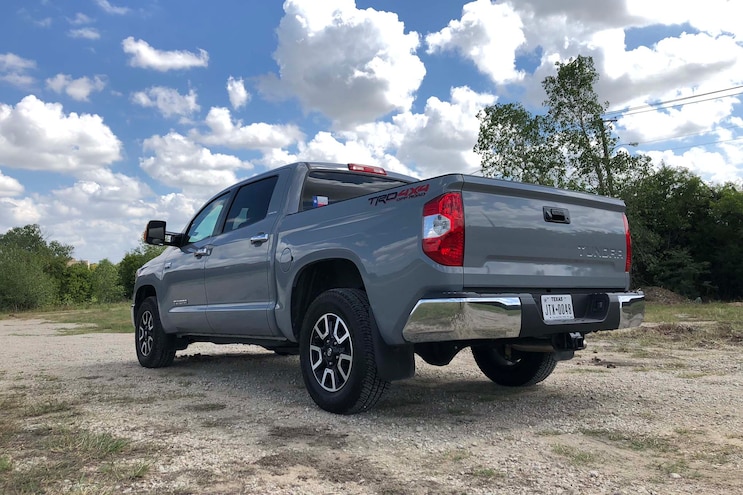 View Photo Gallery | 10 Photos
Photo 3/10   |   Daily Driven 2018 Toyota Tundra Limited Rear 3q
Despite the platform's age, Toyota has taken the bold step of fully updating the vehicle's electrical architecture in order to accommodate the company's Toyota Safety Sense P (TSS-P) system, which is standard across the Tundra lineup. We absolutely loved the fact that the Tundra was equipped with adaptive cruise control, a feature still missing from GM and Nissan portfolios. Along with adaptive cruise, TSS-P brings lane departure warning, automatic high-beams, and forward pre-collision with pedestrian detection. Blind spot monitoring and rear cross-traffic alert are also available, though not specifically part of TSS-P.
Overall the Tundra does not disappoint. While some aspects feel dated, the truck manages to hit all the highpoints of what a pickup should be. Ride quality is acceptable, steering and braking are good, and engine power is adequate. Payload and tow ratings are on par with newer -ton offerings, and an available 38-gallon fuel tank ensures the truck can go the distance. Both the driver and passenger seats are comfortable on extended road trips, and there's just enough tech to keep everyone happy (though a few more USB ports would be nice). If you're in the market for a proven platform with Toyota reliability, and can do without the latest gadgets and gizmos (no CarPlay is the only thing that really hits us where it hurts), be sure to give Tundra a second look. 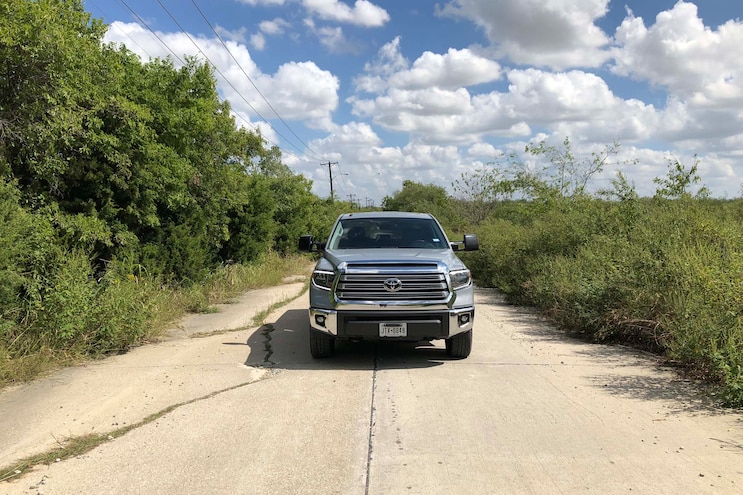