Bugout on a Budget 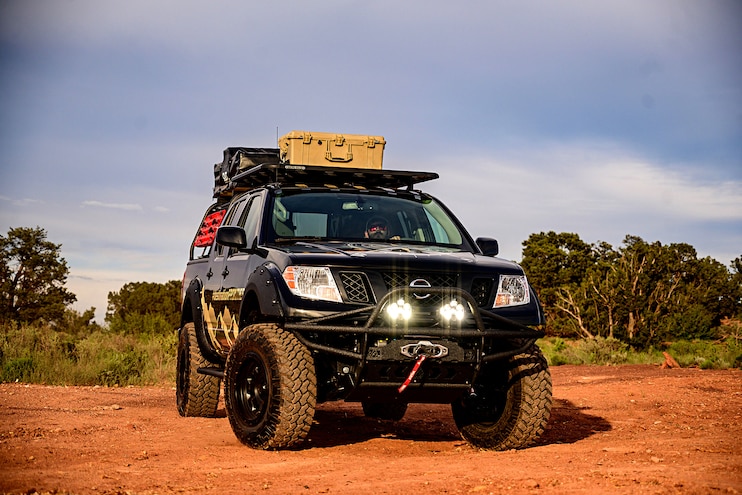 When the radio in our truck crackled to life, we never expected to hear the words that came from the guide in the lead truck: "There's a dog on the trail, watch out."

We were on one of the old fire roads that leads into Grand Canyon National Park. Instead of taking the paved highway, we were following an old stagecoach route into the park, just as people did 100 years ago. It was remote, and cell phone service was virtually nonexistent.

That's why it was weird to spot a well-mannered, well-groomed and seemingly well-fed Chihuahua mix named Benito. He had a collar and tags and was more than willing to hop into the Nissan Armada in our group.

The group we were with, drivers of a bunch of Nissan body-on-frame trucks and SUVs, was heading to the Grand Canyon for some sightseeing and showing off some overlanding capability ahead of the Overland Expo West show in Flagstaff, Arizona. The fire road didn't require a lifted and off-road-prepared pickup to make it, but we were in a very special one Nissan put together for the event. 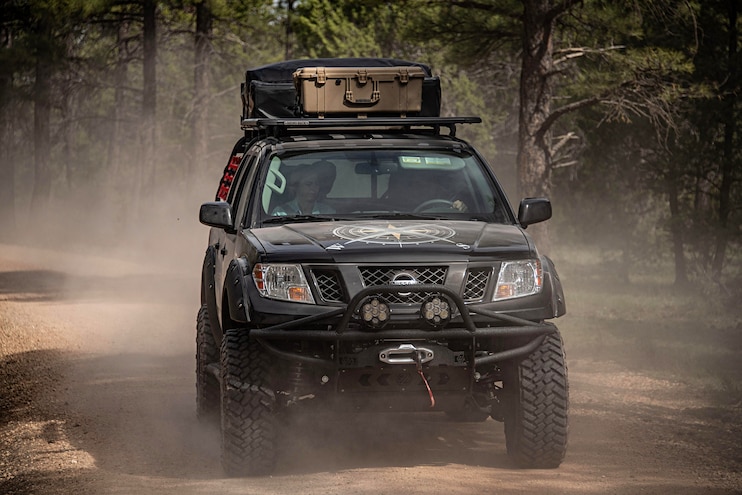 Building an overlanding rig can be quite expensive. The gear and rigs featured in magazines and on the top online sites carry massive price tags. It could appear daunting to someone who wants to get his or her feet wet in the hobby but then realizes a second mortgage is required to get equipped.

That's why, when we found little Benito on the trail, we were piloting something Nissan called Destination Frontier. It is a complete overlanding rig with a price tag, including the cost of the pickup truck, of around $40,000.

That's a brand-new truck, with a brand-new truck warranty, and approximately $8,000 worth of gear for a suggested retail price less than some of the other midsize trucks currently on sale. Plus, the modified Frontier has even more capability than the stock offerings at this price.

For the sake of this build, Nissan started with a Frontier SV Crew Cab Midnight Edition, but the beauty is that you could start with a basic four-wheel-drive Frontier—with a manual transmission—and work up from there for even less money. 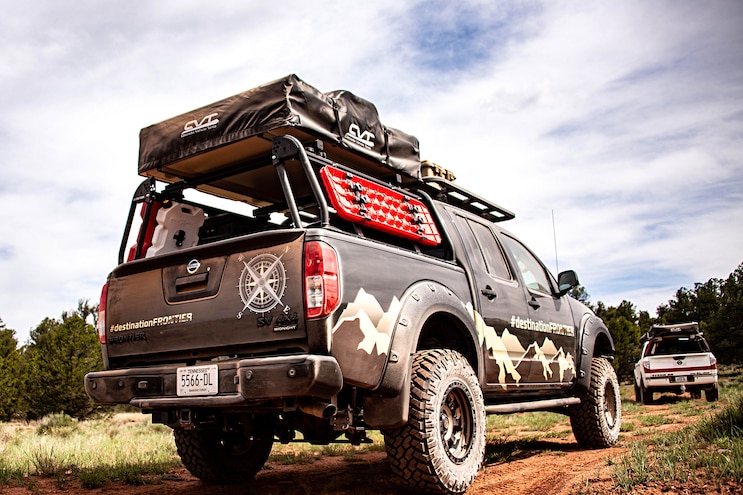 A Nisstec 3-inch lift was added and the wheels were replaced with American Racing AX201 units with Nitto Trail Grappler off-road tires. Heft Fabworks supplies the front bumper, skidplates, and rock sliders to protect the underside of the truck. A Warn Zeon 10-S winch was also added for on-trail rescues.

For the multi-day adventurer, a Leitner Designs bed rack supports a CVT Mt. Shasta rooftop tent. A Rhino Rack Pioneer Tray helps with gear storage, and there's even a fridge and freezer on board from Dometic. The Nissan team also added a set of Baja Designs LP6 Pro lights for better night vision.

Inside, the only addition is a set of Weathertech mats to keep the interior a bit cleaner and protected from mud, dirt, and debris.

Unlike some Nissan truck builds, such as the Ultimate Service Titan or Mountain Patrol Armada, Destination Frontier is built using off-the-shelf components. Nothing on the truck is something that couldn't be purchased today and equipped on a Frontier. 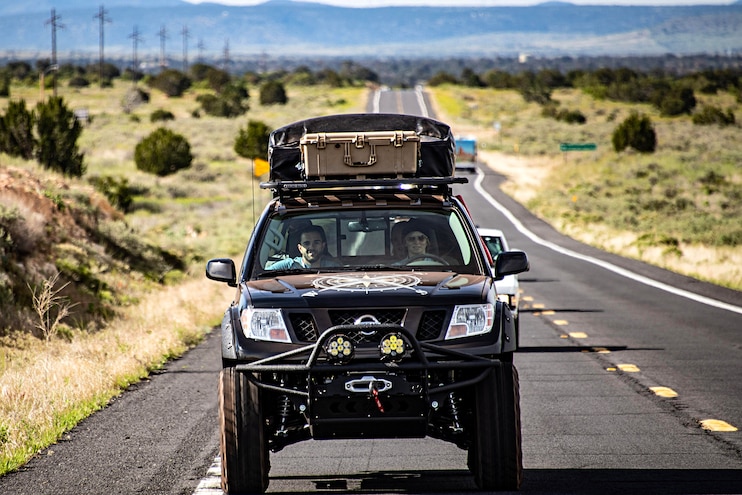 It also demonstrates how inexpensively one could get into overlanding. Nissan didn't skimp on the quality of the upfits, but if you needed a smaller tent or didn't want a powered freezer on your build, you could skip it to save some money.

Depending on where you plan on overlanding, you could even skip the lift kit and big tires. More ground clearance is always appreciated when off-road, but none of the trails we were on that day needed the three extra inches of height. If you daily-drive your overlanding truck, you might even appreciate the better ride quality from stock height and tires.

You could even save more money by starting with a used truck. But there is an argument to be made for an inexpensive new truck that has solid aftermarket support and new car reliability for your build, especially when you don't want you and your family to be stranded out in the middle of nowhere like little Benito.

Benito joined us for the rest of the day, appreciating the attention from everyone in our group, and the air-conditioned seats of a few of the trucks. He even attended the reveal of the Ultimate Parks Titan, a one-off special build that was donated to the National Parks Foundation and will be put to work at the Grand Canyon. 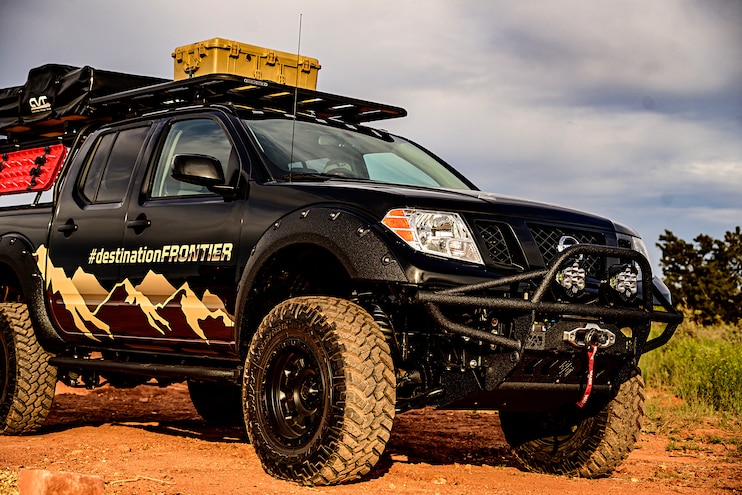 Built atop a Titan XD, the custom build can sleep up to seven people when the trailer is included, and it even includes an onboard generator and a kitchen that redefines the term glamping. The truck will be used by the Grand Canyon Service Conservancy and is supported by Nissan if the team has any issues.

Thankfully Benito was microchipped and our team was able to contact his owners, who were reunited with their dog after the event. Though we're pretty sure several people in our convoy were looking at shelters when they got home in order to adopt their own overlanding companion.

As for the truck itself, the Frontier platform is growing in age and it doesn't have the latest and greatest technology the competition offers. But it is the least expensive pickup truck you can buy in the United States today, and reliability issues don't seem to exist. If you're thinking about taking the plunge but don't want to break the bank, now might be the time.

- OF
By Chad Kirchner
14 Articles