Ford’s Explorer Is a Moving Target 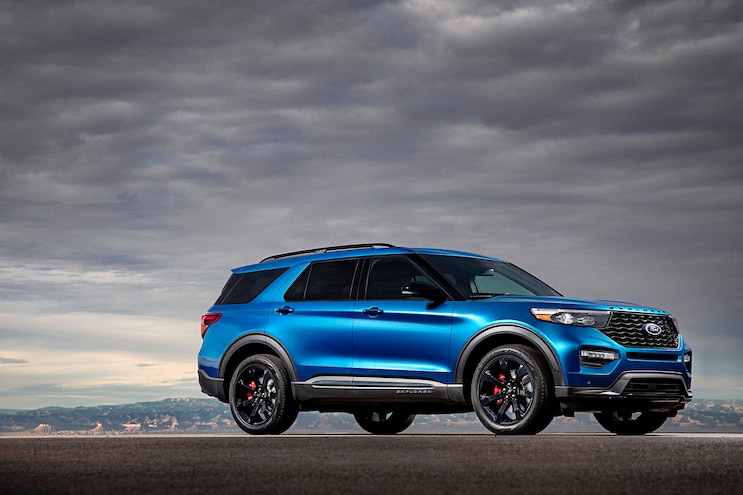 The 2020 Ford Explorer has a hard road ahead, now that it's facing brand-new and significantly improved rivals like the Honda Pilot, Chevrolet Blazer, Kia Telluride, Volkswagen Atlas, and Subaru Ascent. The Ford Explorer traces its roots back to the '90s, including a memorable Hollywood career outrunning some extremely cranky dinosaurs, but that doesn't mean it gets a free pass among a crowded SUV field.
That's why, when it comes to the 2020 Explorer, Ford did more than tweak the options sheet and add some extra features. The basic blueprint of the Explorer has been completely reengineered, from the lighter chassis it rides on to the positioning of its three available engines. All three engines have been turned to a north-south longitudinal position, which helps balance weight and provides better ride and handling characteristics.
This also means that, for the first time in nearly a decade, the Explorer is available in rear-wheel-drive format. When properly equipped, the 2020 Explorer can also tow up to 5,600 pounds. That's more than enough to haul something like a sizable boat—Ford had a couple of them hooked up and ready to roll during our testdrive—or about 180 full-grown velociraptors. (Fun Fact: Full-grown velociraptors were only about 30 pounds apiece.)
Velociraptors were noticeably absent from the drive, unfortunately. 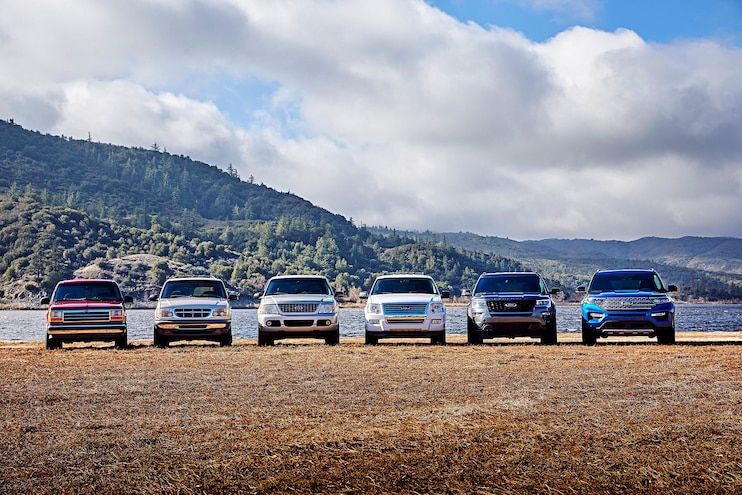 View Photo Gallery | 182 Photos
Photo 2/182   |   Six Generations Of Ford Explorer
Time to Drive
Our testdrive of the new Explorer took us to the small town of Stevenson, Washington. Located about one hour's drive east of Portland, Oregon, the quiet location and empty roads provided an ideal opportunity to get acquainted with nearly every model in the lineup. In total, there are five main trim levels: XLT, Limited, Hybrid, Platinum, and the performance-tuned ST. Only the entry-level XLT, which has a starting price of $37,770 (including destination fee), was missing from our drive.
Moving our way up the range, let's start things off with the Explorer Limited. Powered by a 2.3L turbocharged four-cylinder that provides 300 hp and 312 lb-ft of torque, this motor was immediately impressive when we first stomped on the gas pedal—all in the name of professional journalism, of course. Coupled with a smooth 10-speed automatic, the sole gearbox available on all variations of the Explorer, there is plenty of power to get down the road swiftly.
Better still, getting on that gas pedal doesn't mean fuel bills will drain your bank account. When equipped with optional all-wheel drive, this punchy turbo-four returns an EPA-estimated 20 mpg in city driving and 27 on the highway (in rear-wheel-drive format, these improve to 21/28 city/highway). For a little reference, a 2019 Honda Pilot with all-wheel drive rings in at 18 mpg city/26 mpg highway. 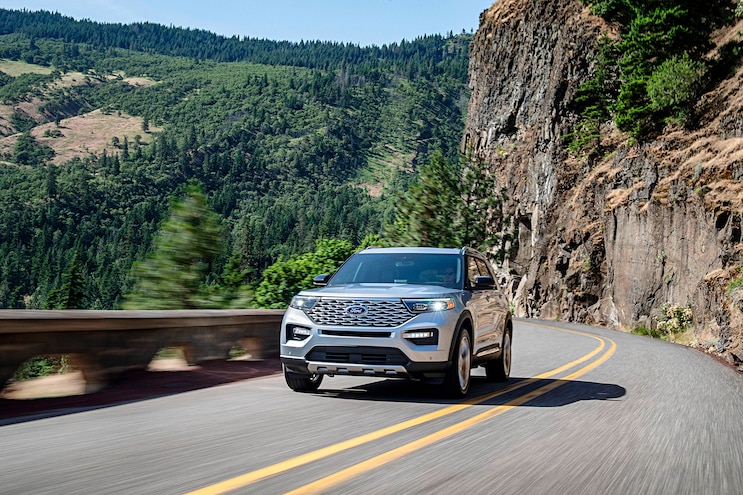 View Photo Gallery | 182 Photos
Photo 3/182   |   Ford Explorer Platinum 042
The Explorer's ride was nicely controlled and supple, something that was greatly appreciated on unfamiliar roads that curved and dipped their way alongside the Columbia River.
More Power, and Lots More Screen
Too much of a good thing can sometimes be exactly that—too much. The Explorer Limited impressed us with its ride comfort, cabin room, strong powertrain, and impressive list of features. With a starting price of $49,225, the Limited comes with luxury touches like leather seating, 12-speaker Bang & Olufsen stereo, satellite radio, second row captain's chairs, tri-zone climate control, Wi-Fi hot spot, and power folding third-row seats. It also comes with Ford Co-Pilot Assist+, an expansive suite of safety items that includes lane-keep assist, blind spot monitoring, hill descent control, adaptive cruise control, and automatic emergency braking, to name just a few.
So, if the Limited is so nicely optioned, what's the draw of a range-topping model like the Explorer Platinum? Don't get us wrong, the twin-turbocharged 3.0L V-6 used in the Platinum pushes out 365 hp and a meaty 380 lb-ft of torque. If the Explorer Limited was peppy, the Platinum is downright fast—and we haven't even arrived at the most powerful version of the Explorer yet. Cabin materials are excellent, the quilted leather trim is handsome, a dual-pane moonroof adds plenty of light, and the 21-inch alloy wheels looked great and didn't ruin the ride. 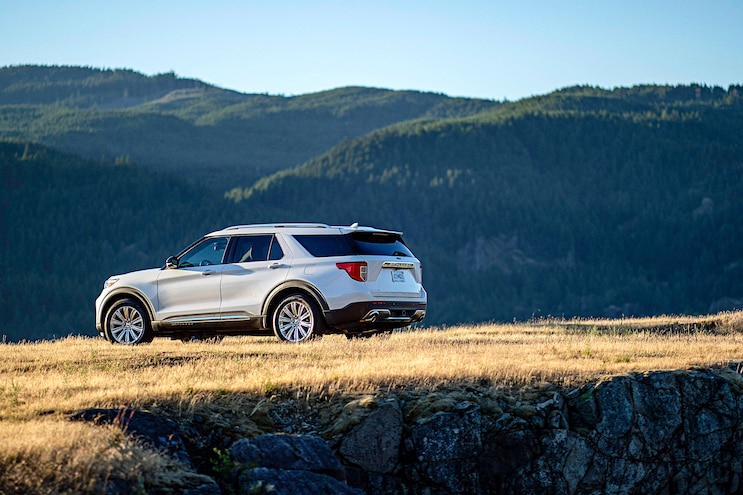 View Photo Gallery | 182 Photos
Photo 4/182   |   Ford Explorer Limited 012
Unfortunately, at more than $59,000, the Explorer Platinum starts to lose the plot when it comes to value. While it's loaded with almost every conceivable feature, you could probably live without the turbo-V-6 (unless you need the full 5,600-pound towing capacity). You'll definitely be happier with the standard touch screen, since the one fitted to the Platinum looks like someone installed a laptop atop the dashboard. We're all for large and easy-to-use infotainment system screens, but the 10.1-inch unit in the Platinum model borders on the ridiculous. You even lose the smartphone-friendly dash cubbyhole that's nestled conveniently below the standard screen.
Hybrid, and High-Performance ST
If the Platinum is a step too far for your midsize SUV budget, the Explorer Hybrid could be worth considering. Starting at little more than $53,000, the combined total output of the 3.3L naturally aspirated V-6 electric motor and 1.5-kWh lithium-ion battery pack is 318 hp and 322 lb-ft of torque. At the time of our testdrive, Ford did not have official mileage figures but did state overall driving range would be more than 500 miles per tank of gas. 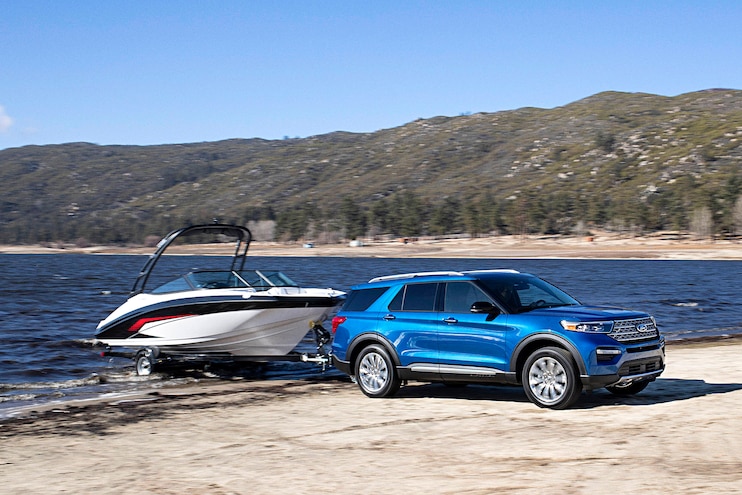 View Photo Gallery | 182 Photos
Photo 5/182   |   Explorer Hybrid 002
Using our automotive expert crystal-ball-gazing—and 3rd-grade-level math, because we know the Hybrid's fuel tank measures in at 17.9 gallons—we'd peg the Hybrid's upcoming mileage at about 27 to 28 mpg in a mix of city and highway driving. The Hybrid can also tow up to 5,000 pounds when fitted with the optional Class III Tow Package. Our main complaints with the Explorer Hybrid center on the $4,150 cost of the engine itself, as well as some unrefined engine behavior as the gas motor and electric engine juggle power delivery. Once again, the base 2.3L turbo-four is so nicely mannered, it's hard to justify the price premium here.
That is, unless you're totally power hungry and want the Explorer ST. To be clear, we started and ended our driving day with Ford's performance-oriented and family friendly SUV. We're red-blooded journalists, after all, and the most powerful truck is the one we're always bound to flock to first (and last). 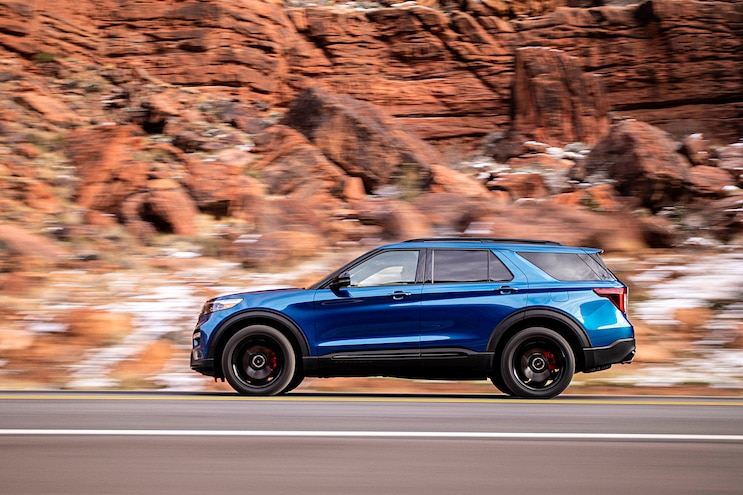 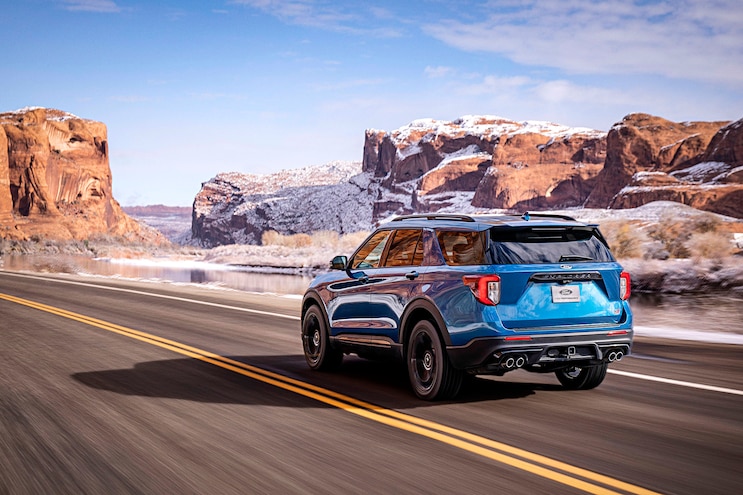 View Photo Gallery | 182 Photos
Photo 7/182   |   Explorer St 007
Despite the twin-turbo V-6 and 400 hp under the hood, the drive experience was a little underwhelming when starting off. Sure, it pushed us into the cozy leather seats under hard acceleration. It also launched one very expensive camera straight into the dashboard under hard braking. The ST's upgraded brakes are strong, trust us on that one!
But the engine note was flat and shift points catered more to fuel mileage, versus corner-carving driving fun. Then we toggled the drive mode selector into "Sport," and things quickly came into focus. The exhaust note of the turbo-six went up an octave, the 10-speed transmission held onto gears when powering out of corners, and the steering added extra resistance (though not much in the way of actual feel). We even toggled up and down the gears using the paddle-shifters to enjoy the surge of horsepower and how well the Explorer ST gets down the road despite tipping the scales at 4,300 pounds.
Is it silly, and do you need this much power? Yes, and probably not. But we sure like it, all the same! 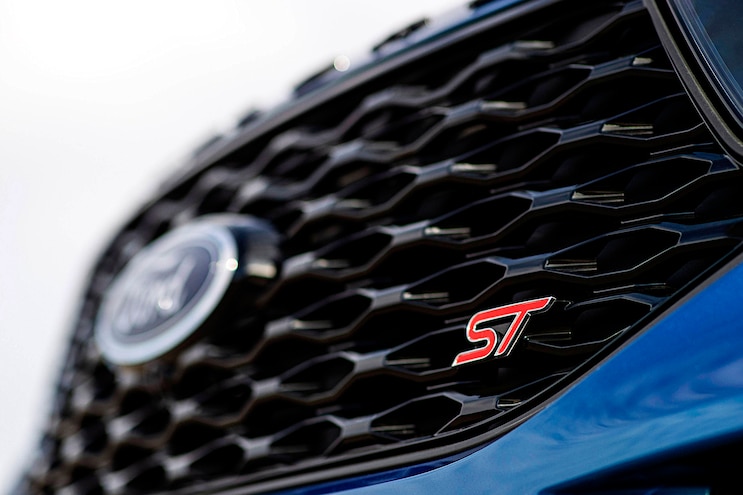 View Photo Gallery | 182 Photos
Photo 8/182   |   Explorer St 012
We understand most people are going to consider the Explorer because the third-row seats are easy to access and can hold actual adults. Or maybe it'll be down to the handsome dash and comfortable seating, the clear and concise infotainment system, or the 18.2 cubic feet of cargo space behind the third-row seatbacks. Ironically, the fact that the base turbo-four engine is so good works against the idea that you must load an Explorer with every option and more power. That's true even when the upgrade nets you more mpg, as it does in the Hybrid model.
The Platinum and ST are opulent and speedy, though they're a bit like adding extra frosting onto an already delicious cake. The Explorer is a great SUV, and a much better value when you stick to the lower- and middle-end of the lineup. 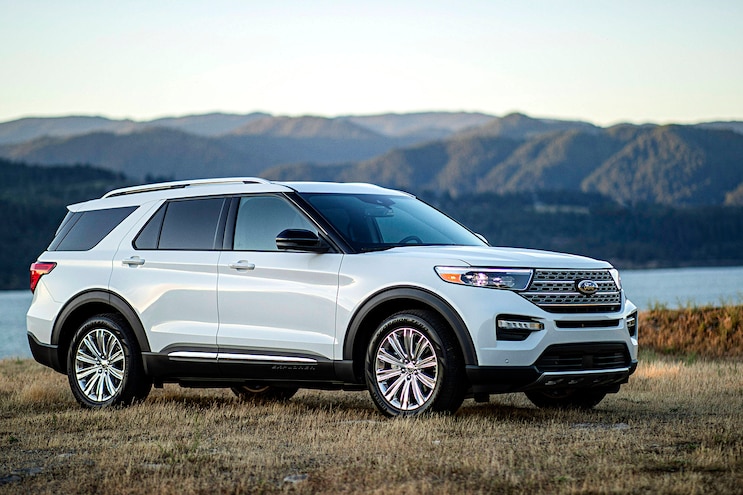 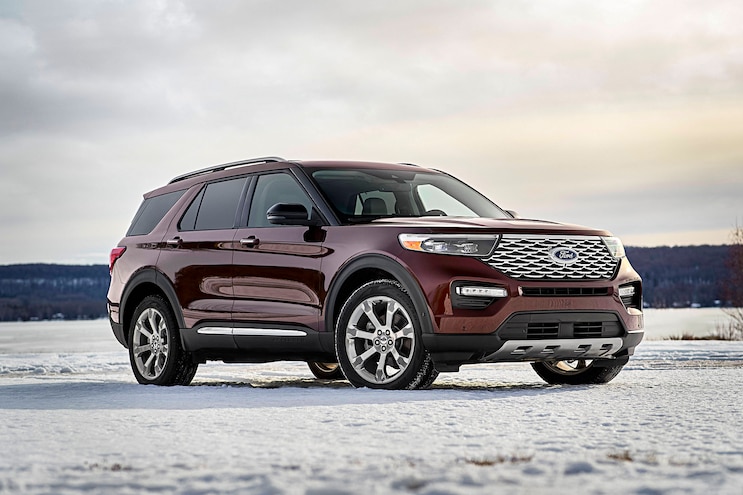 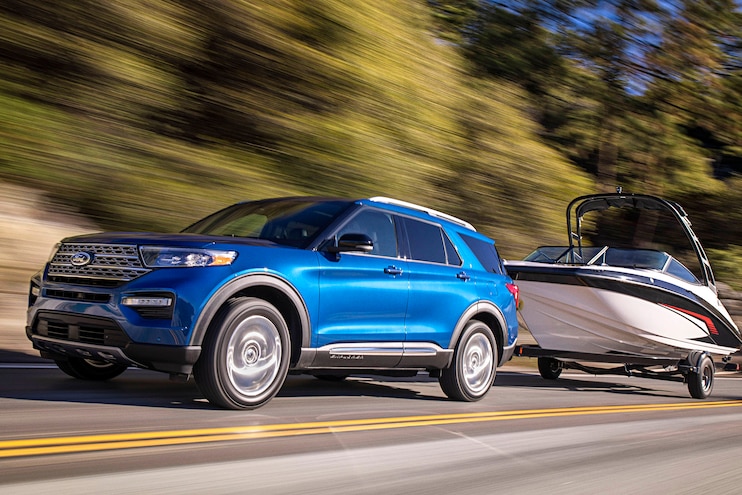 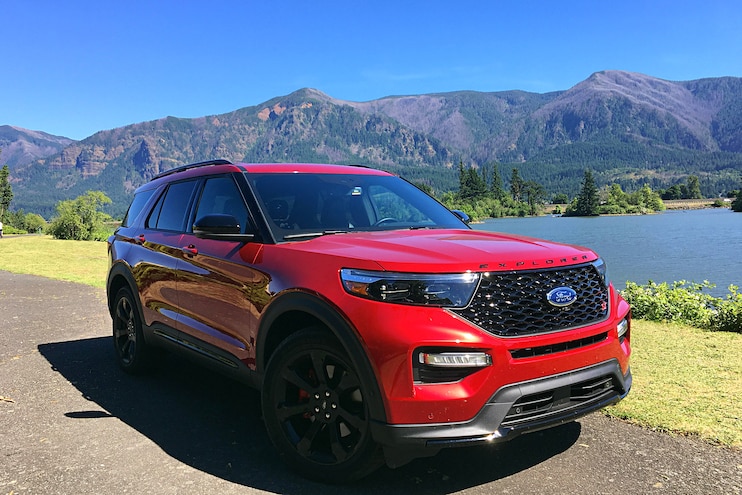 - OF
By Nick Kurczewski
7 Articles