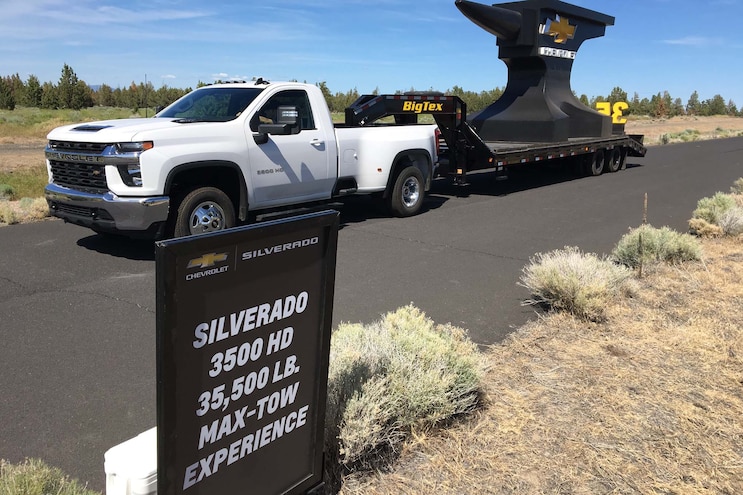 As "media drives" (truck manufacturers' one- to three-day programs that allow journalists and influencers to drive and review new vehicles) go, 2019 has already been a very busy year. The Big Three truckmakers (Ford, GM, and Ram) are rolling out light- and heavy-duty rigs for 2020, and "showing them off" to folks like me is one of their primary objectives—as soon as the opportunity to do so presents itself.

Those of you who follow Particulate Matters closely may recall that I attended Ram's drive event in February 2019 and weighed in on the heavy-duty rigs being showcased on the roads and steep grades surrounding Eldorado Canyon Mine, near Las Vegas, Nevada. With its 6.7L Cummins engine updated to generate 1,000 lb-ft of torque, the new Ram 3500 had (for that moment) the class-leading ability to tow more than 35,000 pounds. "The number" was actually 35,100, to be exact, and the regular-cab, two-wheel-drive, dualie that did it never broke a sweat at any point during my road test.

As I noted in that report, when it came to - and 1-ton rigs of other manufacturers, the jury was still very much out, because I hadn't had a chance to drive them yet. There is no way I would ever authoritatively push the entire stack of chips to one brand without checking them all out. So, in June 2019, Chevrolet flew me (and my wife more on that in a bit) out to central Oregon to road test trucks in its new Silverado heavy-duty lineup. Again, with towing and hauling capability being at the forefront of all the OEM's marketing strategies, we spent quality time with two- and four-wheel-drive versions of 6.6L Duramax L5P-powered 2500HD and 3500HD Silverados, hooked to loaded trailers weighing 12,000, 14,000, and a whopping 35,500 pounds (before anyone reading this gets uptight about the commercial driver's license requirement, the heaviest weight was towed by a two-wheel-drive, regular cab dualie on a closed, private course, which waived the need for a CDL).

Because space here is limited, I'll leave cluing you in on details about the new trucks' exterior makeover and their interior plushness (which isn't dramatically updated from '19 models), terrific ride quality, balance, handling, and brilliant new towing-assistance camera technology to our colleagues at Truck Trend. However, one thing I will say about the new "look," which has had Internet critics up in arms since it was introduced, is that it's very difficult (almost impossible) for anyone to judge a vehicle's appearance 100 percent "objectively."

While many folks have balked at the face-lifts the new Chevy's were given—and understand this is my opinion—in person, they're really not as hideous as naysayers are making them out to be. From the light-duty 1500 (which we've had a year to get used to) to the 2500HD and 3500HD, I'm good with the fascias, and everything else about the Silverado lineup.

But, as it is with all the trucks in the heavy-duty segment, drivetrain is our primary area of focus. I'll guess it's the criteria many of you are most interested in, too. Despite the heavy-duty Silverado's 6.6L Duramax L5P diesel engine not receiving any significant changes or improvements, the all-new Allison 10L1000 10-speed automatic transmission (close-ratio gearing ranges from a 4.54:1 First, to 0.63:1 Tenth) it's coupled with and 3.42 rearend gears make believing there hasn't been a horsepower (still 445 hp at 2,800 rpm) or torque (910 lb-ft at 1,600 rpm) increase really difficult. 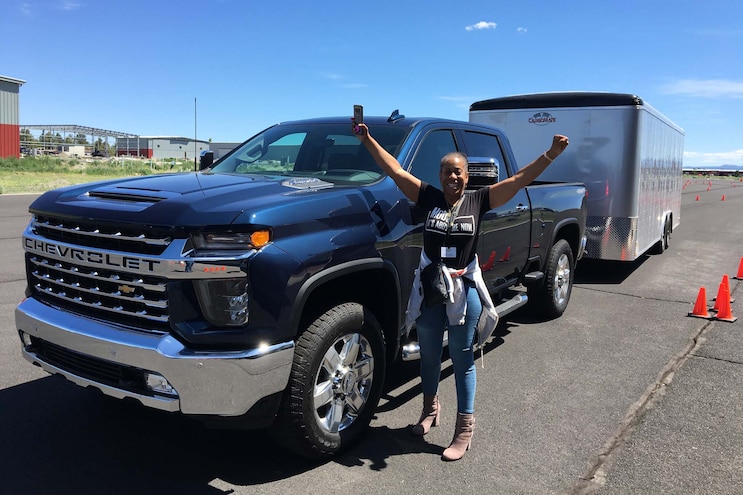 View Photo Gallery | 3 Photos
Photo 3/3   |   I mentioned that my wife, Crystal, accompanied me to Oregon. Chevrolet invited "plus ones" to help demonstrate the wicked trailering-assist camera technology available in its light- and heavy-duty '20 Silverados. Having no towing experience whatsoever, Crystal used a 2500HD's mirrors and several of the camera-system's 15 available angles/views, to safely navigate a loaded enclosed trailer through a challenging cone course. It's very important to understand this: The cameras are not intended to replace using mirrors or instantly turn a novice into a pro when it comes to towing. They were developed to assist and give additional confidence to anyone—rookies and towing veterans—toting trailers behind them.

Seriously, the L5P and 10-speed-gearbox package is the real deal for towing in all conditions (city, highway, up and down aggressive grades, acceleration from a dead stop, deceleration/hard braking, and more), and it enables the heavy (approximately 7,500 pounds), decked-out, four-wheel-drive, crew-cab 2500HD High Country I drove to zip along at or above accepted legal speeds (70 mph in a few areas of freeway) with no problem. Without a trailer, "watch your speed" is a mantra that requires constant mental repeating.

When it comes to towing, the capability that's most bragged about by all the manufacturers—and the catalyst for the informal "war" being waged between the Big Three's heavy-duty rigs—the Duramax-powered '20 Silverado's 35,500-pound maximum trailering rating (for the regular-cab dualie) moves it around the Ram and into the top spot. However, as I did in my report on Ram's big rig pickup, I have to add the "for now" disclaimer. Ford reportedly has a new look and more in store for its Super Duty, which we'll hopefully find out about (and experience through a media drive?) in September.

So, once again, stay tuned. This slugfest is starting to heat up!