Ramble On – Riding a Motorcycle Will Make You a Better Driver 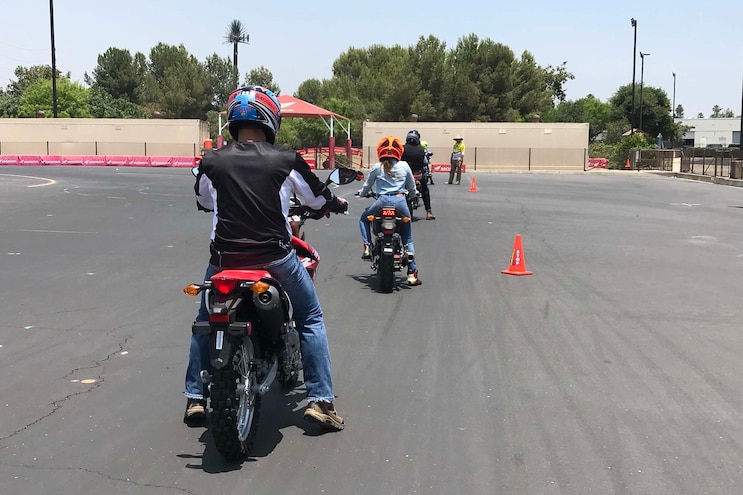 I recently had the opportunity to visit the Colton Rider Education Center, run by Honda Powersports, where I took the Motorcyclist Training Course. I've ridden motorcycles in the past, but it's been several years, so I thought a refresher was in order before I got my '77 Kawasaki project back on the road.
Registered for a two-day course at the Rider Education Center, about 10 other prospective riders and I began by learning the basics and physics of motorcycling. After a few hours of classroom instruction, we hit the bikes (rider's choice of a Honda Rebel 250 cruiser, CBR300R sportbike, CB300R caf racer, or Grom minibike) for an afternoon of practical skills. On Day Two, we repeated the process, getting more technical in the classroom and more nuanced on the riding course.
To perhaps no one's surprise, practicing motorcycling skills has also made me a better driver when piloting something with four wheels. 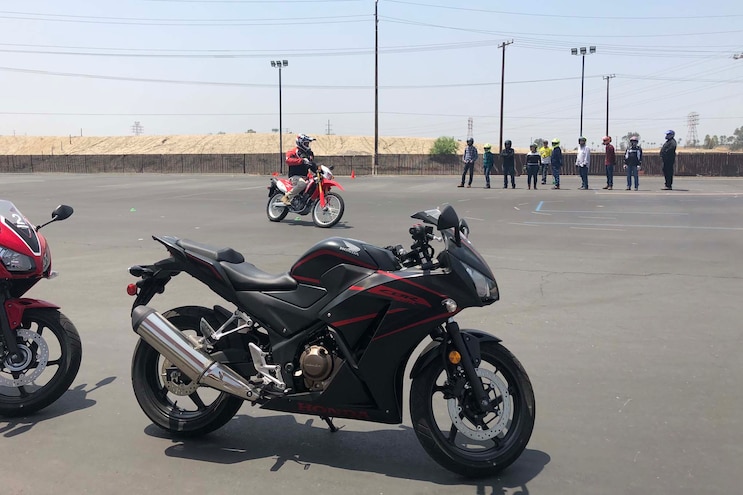 View Photo Gallery | 6 Photos
Photo 2/6   |   Photo by Natalie KumaratneOut on the riding course, we watched our riding instructors demonstrate the skill a few times before trying it ourselves.
While riding a motorcycle might seem a bit more complicated than driving an auto, in reality both require far more attention and focus than we might think—it's the more severe consequences of poor riding that make a motorcycle seem inherently dangerous. But as on a motorcycle, carrying too much speed into a corner in a truck, SUV, or car will result in the vehicle running wide or skidding. As on a motorcycle, inattention to the traffic situation can result in crashes that should have been prevented. And as on a motorcycle, driving impaired can reduce good judgment and coordination to dangerous levels.
We learned in class that braking and cornering at the same time on a motorcycle reduces the efficacy of both, due to the division of the tire's traction between fore-aft and lateral forces. But that phenomenon isn't specific to two-wheeled machines. Indeed, if you ever find yourself entering a corner too quickly in an automobile and you maintain speed, you might find yourself in a front-end skid (understeer) that sends you off the outside of the corner and into a tree. But if you hit the brakes to slow down midcorner, you'll possibly experience the rear end coming around (oversteer)—either can have a disastrous effect on your day. Conversely, if you slow your vehicle to an appropriate speed before entering the corner, you'll come through it without any drama. View Photo Gallery | 6 Photos
Photo 3/6   |   Ramble On Riding A Motorcycle 003
Another key element of riding a motorcycle is a hyperawareness to the road environment. The California Motorcyclist Safety Program is fond of the acronym SIPDE:
Scan aggressively for hazards and to avoid target fixation.
Identify hazards such as other vehicles; moving hazards such as bicyclists, pedestrians, and animals; and fixed hazards such as painted lines, slick surfaces, and guardrails.
Predict how interactions with identified hazards will affect you.
Decide your course of action by prioritizing hazards.
Execute your decision.
SIPDE involves recognizing potentially dangerous scenarios (a car with its blinker on in an adjacent lane, a wild animal on the shoulder, a patch of gravel in the road, and so on), and classifying those risks while visualizing what to do if they come to pass. And it's just as valuable a skill in a car, truck, or SUV as it is on a motorcycle. SIPDE is a mentally exhausting process, but only because most of us have become accustomed to driving on autopilot; like most other habits, SIPDE becomes easier the more you put it into practice. 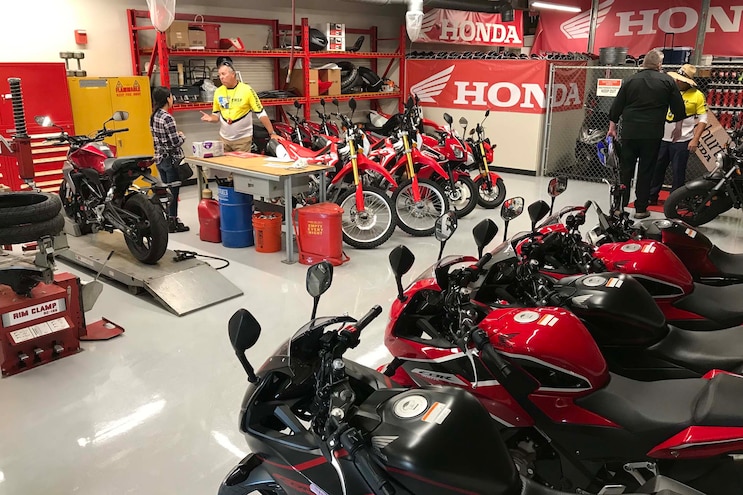 View Photo Gallery | 6 Photos
Photo 4/6   |   The Colton Rider Education Center's storage locker is a compact-bike dream garage. While there's something to be said for liter bikes and big, strong cruisers, lightweight machines like the Honda CBR300R and Grom 125 are light, easy to handle, and hilarious fun at just about any speed.
The third uncommon-common-sense tip I took from the motorcycle course and applied to my drive home in my loaner Honda Passport was the realization that driving impaired is a serious, serious risk. And in this situation, I'm not talking about drugs or alcohol, I'm talking about the fatigue of spending two days in class and on a hot, sunny riding course.
As we learned at the Honda Rider Education Center, impairment can take many forms. Sleepiness, stress at home or work, and even a stiff neck from a bad night's sleep or an aggressive gym session can distract us from the road ahead, lead to poor decision-making, or cause us to drive lazily. And yes, any amount of alcohol will impair driving and riding, even if we're technically "under the limit." 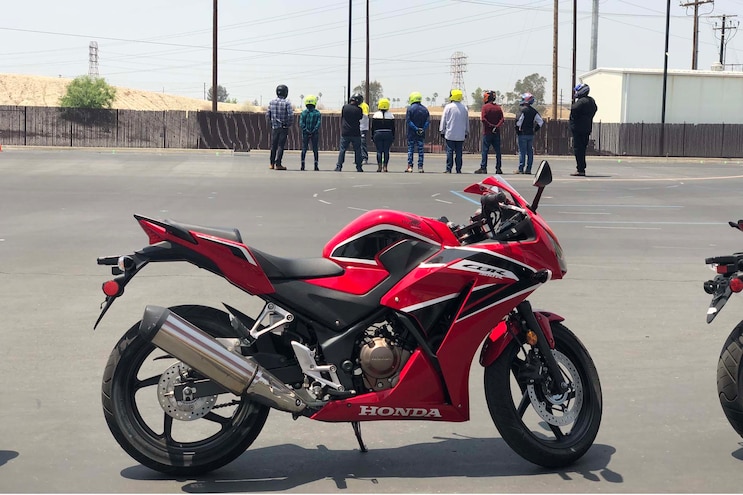 View Photo Gallery | 6 Photos
Photo 5/6   |   Photo by Natalie Kumaratne
Finally, spending two days relatively exposed on a bike has made me more sympathetic to the risks and dangers motorcyclists undertake every day. It's helped me remember to look once, twice, three times for a motorcycle before pulling out into traffic. It's honed my ears to recognize the rat-a-tat of a supermoto or the rumble of a Harley before making a lane change. And it's taught me to communicate my own intentions more clearly to prevent confusing motorcyclists and other drivers before moving through traffic.
If I had to sum up the whole weekend in one phrase, it would be this: "Expert riders [and drivers] use expert judgment to avoid using expert skills." Whether on two wheels or four, driving attentively, purposefully, and with appropriate caution is an excellent practice. If you don't believe me, go sign up for a motorcycle safety course and learn for yourself. 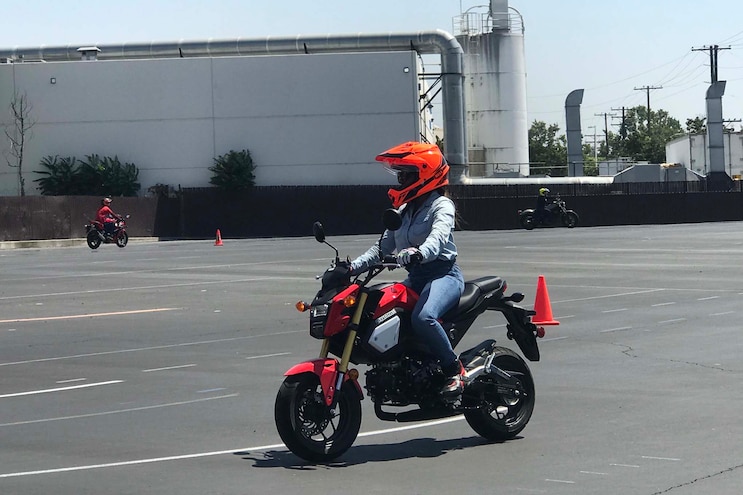