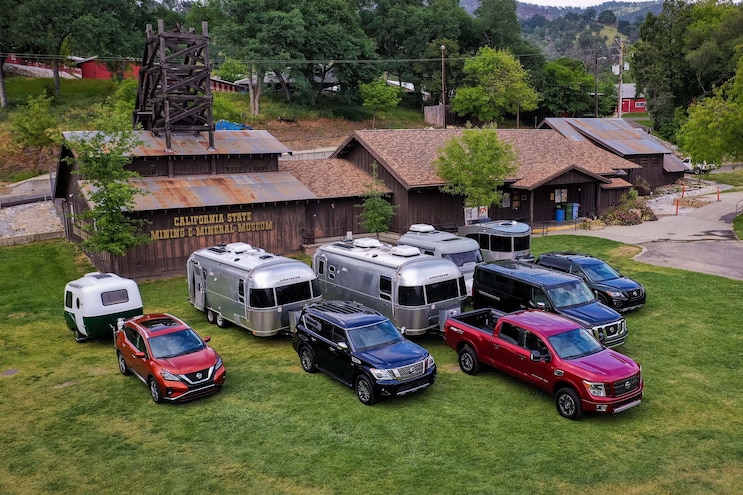 Nissan really enjoys thinking of itself as an enthusiast brand, with products (on the truck and SUV side, at least) that inspire loyalty and passion from owners. Part and parcel to that is what Nissan vehicles enable their stewards to do, and for some, the most entertaining way to spend time in a vehicle is to go on a long, winding road trip. Keen to show us the kinds of adventures its truck and SUV lineup can accommodate, Nissan brought us to Mariposa, California—just a stone's throw away from Yosemite National Park—to practice some basics of trailer towing and enjoy a few days on the road in its vehicles. On hand for us to sample were a 2019 Pathfinder Rock Creek Edition, 2019 Murano, 2019 Titan, 2019 Titan XD, and 2019 NV3500 passenger van, each hitched to an appropriately sized travel trailer to give us a good idea of what they could do. 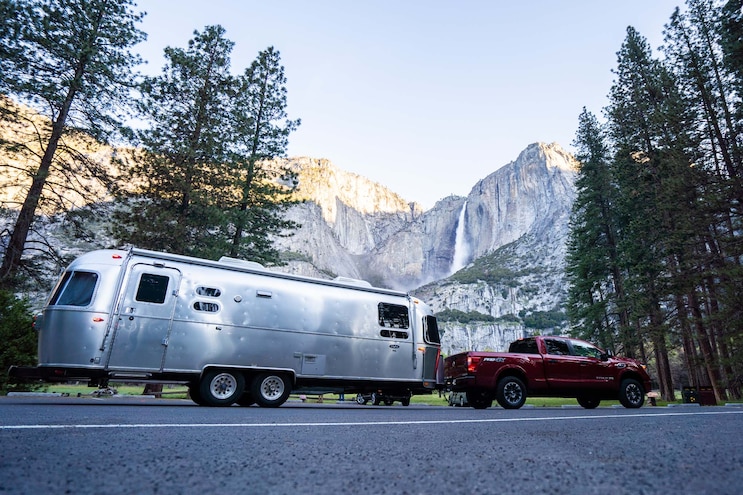 Hauling How-Tos
Before they handed anyone the keys, Nissan experts first gave everyone a strict tutorial on safe trailering practices, including ensuring the trailer brakes and lighting all function properly (the Titan's standard Trailer Light Check feature makes this a one-man operation using the keyfob). Now, your author has been towing trailers for the better part of two decades now, but the safety check was useful nevertheless. For example, although we know to cross safety chains under the trailer tongue, do you know why? It's so the chains can act as a "cradle" if the trailer comes unhitched for any reason—the chains will help keep the tongue from dragging on the pavement, causing damage and increasing the risk of a crash. We also got a primer on how to effectively use a trailer brake controller to manage unexpected trailer sway, handle an emergency stop, and simply drive around town with both trailer and truck braking proportionally.

And again, in spite of our relative level of experience towing a trailer, one thing binds us up every time: reversing. Here again, Nissan's experts gave us a brilliant tip. When reversing, hold the steering wheel at the five- and seven-o'-clock positions with palms up and thumbs extended. Instead of thinking about which direction you want to turn the wheel, think about where you want the trailer to go, then turn in the direction of that corresponding thumb. You want the trailer to go right? Turn in the direction of your right thumb (therefore turning the wheel to the left). 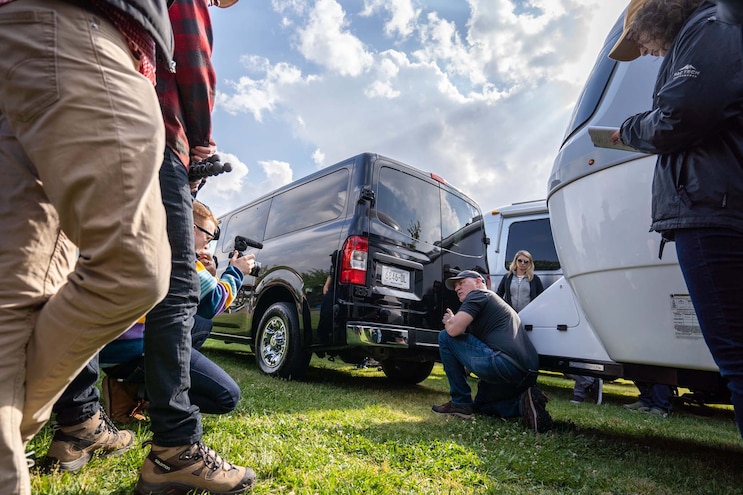 View Photo Gallery | 12 Photos
Photo 3/12   |   Part of the Nissan Yosemite experience was to learn how to tow a trailer using many of Nissan's truck and SUV products. Part and parcel to that education was safety. 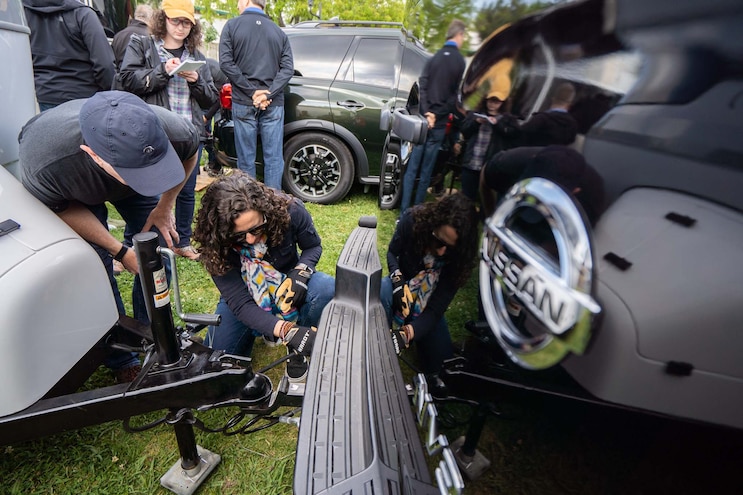 Practice Makes Perfect
In addition to the classroom course, Nissan also wanted to give us a chance to try out towing via a few different obstacle course-type challenges. The first was a diagonal-reverse segment that taxed those aforementioned parking skills. But using the tactics the experts taught us, we were able to slot the Airstream International Signature trailer neatly within the lines in one shot, aided by the easygoing low-end torque of the Titan XD's Cummins 5.0L V-8. This kind of challenge is pretty indicative of what one might experience at a campground or a storage facility, as many of those feature back-in, rather than pull-through parking spaces.

Our next challenge was a right-left-right ess bend from behind the wheel of a Pathfinder Rock Creek towing a compact Airstream Basecamp rugged trailer. Diabolically, Nissan set the course up with narrow lanes, requiring us to aim the Pathfinder toward the furthest outside line possible to avoid running over cones on the inside with the trailer. The Pathfinder/Basecamp combo proved to be easily narrow and nimble enough to tackle the job. 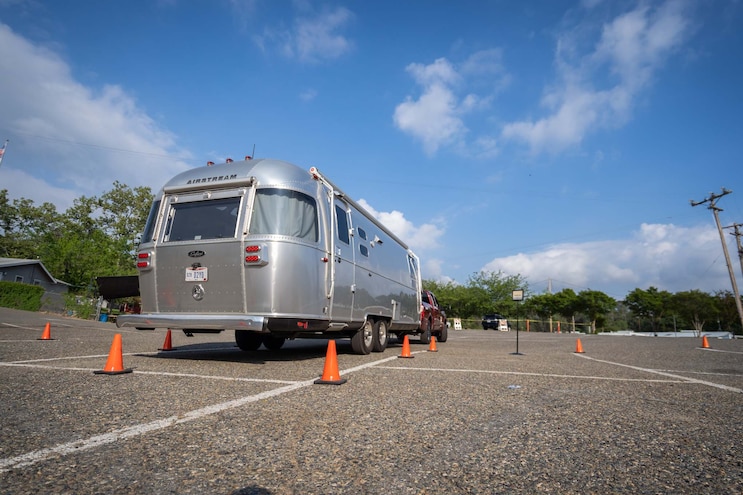 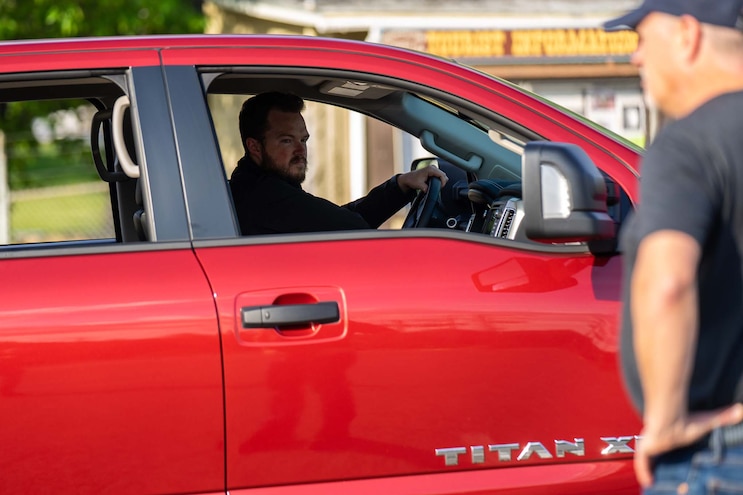 Finally, we tried our hands at a relatively speedy slalom course courtesy of the Armada Platinum and a two-axle Airstream Flying Cloud. As with the ess curve, this station required us to pick the appropriate line and leave more room on the inside than we might otherwise expect. We also had the chance to sample how different trailer brake settings affected driveability and how to manually operate the trailer brake in certain situations. 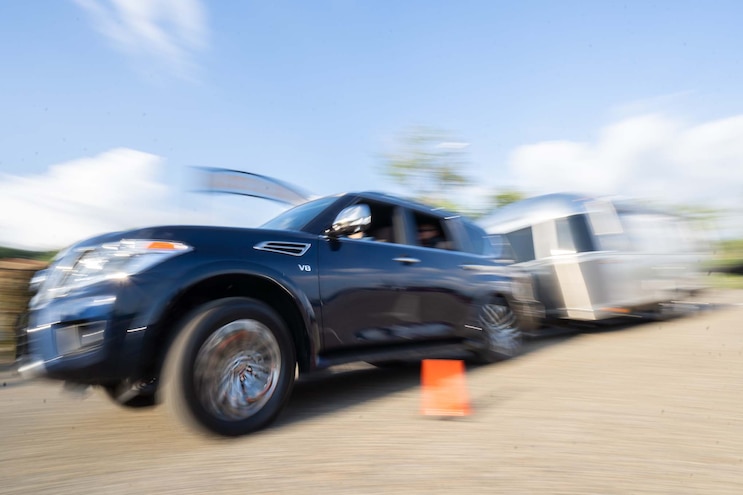 Practical Exam
Our final towing challenge came in the way of some real-world experience. For that, we eagerly jumped behind the wheel of a recently revised 2019 Murano hitched to one of the cutest things on one axle, a Happier Campers modular travel trailer. The small trailer slotted in well under the Murano's 1,500-pound towing capacity, and the Murano handled the load as though it weren't even there. While 1,500 pounds isn't a whole lot of trailer, the Murano would nevertheless be an excellent light-duty road trip vehicle, saddled with either a cargo trailer to free up room in the cabin or a little camper like this cutie. We're still impressed with the Murano's slick interior styling and gutsy 3.5L V-6, although it's really time for an infotainment upgrade, and we still don't love the CVT for enthusiastic driving. 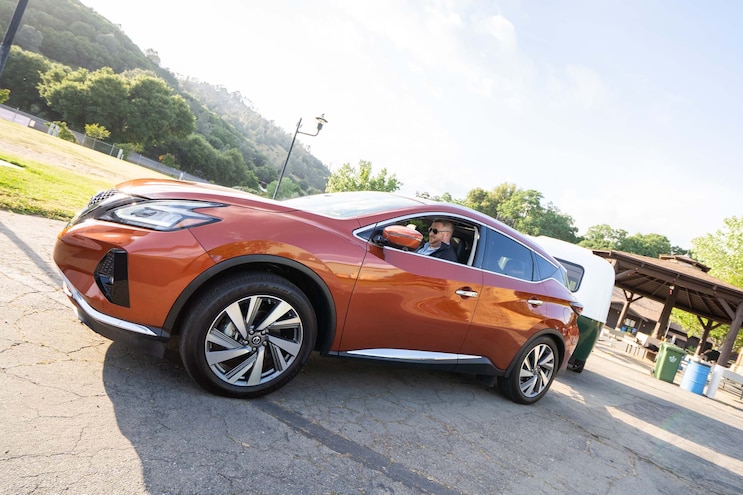 View Photo Gallery | 12 Photos
Photo 8/12   |   We then hit the road for some real-word towing experience, and the Nissan products on hand were well-matched to their respective trailers. 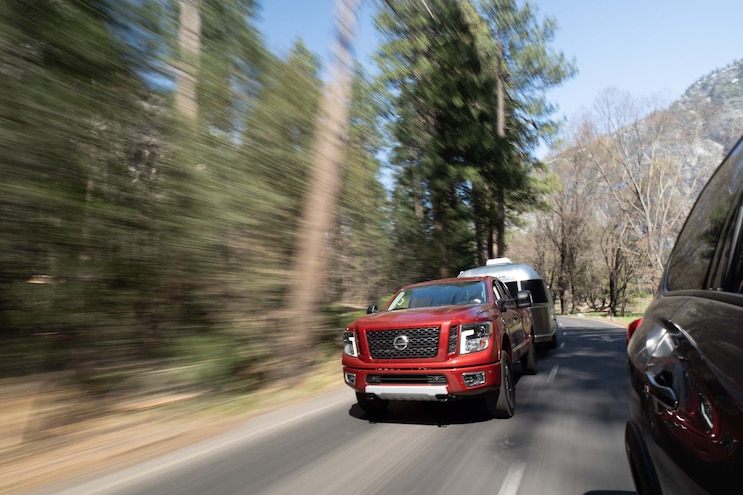 We also took a crack at driving Nissan's biggest bruiser at the event, the unabashedly boxy NV3500 passenger van. Although the family hauler was only loaded with a 4,000-pound-GVWR Airstream Nest compact travel trailer (the NV3500 is rated for up to 8,700 pounds), we still got a good feel for how solid and pleasant the longish-wheelbase NV performs as a toy tugger. And while it's hard to ignore the van's work-truck roots—hard plastic everywhere, narrow rear seats, and limited sound deadening—it's nevertheless a spacious place for a big family to spend time.

Vacation Day
It would have been rude of Nissan to bring us so close to the national park (even going to the gracious lengths of putting us up at the fantastic AutoCamp Yosemite) without saving some time to explore. Thankfully, on our second day of the adventure, we hitched up the Airstream Signature to the Titan XD, divided ourselves among the other vehicles in the convoy, and drove into Yosemite National Park.

Awe-inspiring is too weak a phrase to describe Half-Dome, Yosemite Falls, or any of the other natural beauties found everywhere we looked. What's more, the scenery begins well before you actually enter the park, with every city from Mormon Bar to Mariposa to Midpines offering nothing but crisp, early-spring magnificence before we arrived in Yosemite Valley. Once inside the park, we took the opportunity to hike some of the way up the Yosemite Falls trail, which afforded us incredible views of an Upper Yosemite Fall that was heavily inundated thanks to late-winter snowstorms. In that wise, our timing was ideal, early enough in the season to avoid the massive influx of tourists, but late enough to enjoy the greenery and ephemeral river flows yielded by the rainy and snowy winter. 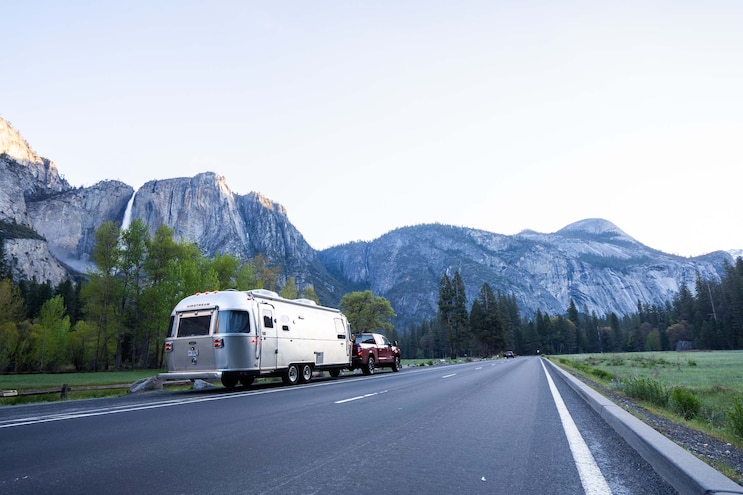 View Photo Gallery | 12 Photos
Photo 10/12   |   Yosemite wasn't the first national park, but it's arguably one of the most famous, thanks in part to the stellar Yosemite Valley that was formed about a million years ago when a thick glacier cut through the area's solid granite rock. Those sheer cliff faces also make space for Yosemite Falls, one of North America's highest waterfalls.

What's more, we got the chance to spend the day in Yosemite with our friends at Nissan and colleagues from other media outlets. It was a day well spent in the Sierra Nevada mountains, nestled between the rills formed by an ancient glacier that cut its way through Yosemite millions of years ago. Thanks to our Airstream base of operations (and the Titan XD that brought it to our picnic area), we all had a great day in the outdoors, away from our desks and hanging with friends.

2019 Nissan Murano Platinum
It could be argued that the Nissan Murano was one of the first style-conscious, on-road-oriented crossover SUVs when it debuted for 2003. Since then, the two-row utility vehicle—bigger and stouter than the likes of the Honda CR-V and Toyota RAV4, but deliberately smaller than the similarly powerful Honda Pilot three-row—has inspired imitators in the way of the Ford Edge and Chevrolet Blazer.

But the original, now in its third generation and enjoying the fruits of a midcycle redesign for 2019, is very much a contender in the lifestyle-CUV space. Changes for 2019 include new semi-aniline leather with diamond quilting on the top-spec Platinum and available Nissan Safety Shield 360 driver-assist and active safety technology (standard on Platinum and part of the optional SL trim level's technology package). There are also some styling changes you'll have to squint to notice: headlamps with a reshaped internal design, standard LED foglights, darker-tinted taillights, a more pronounced grille, and new designs for each trim level's alloy wheels. Also on offer are three new colors, including the richly autumnal Sunset Drift Chromaflair we drove in Yosemite. 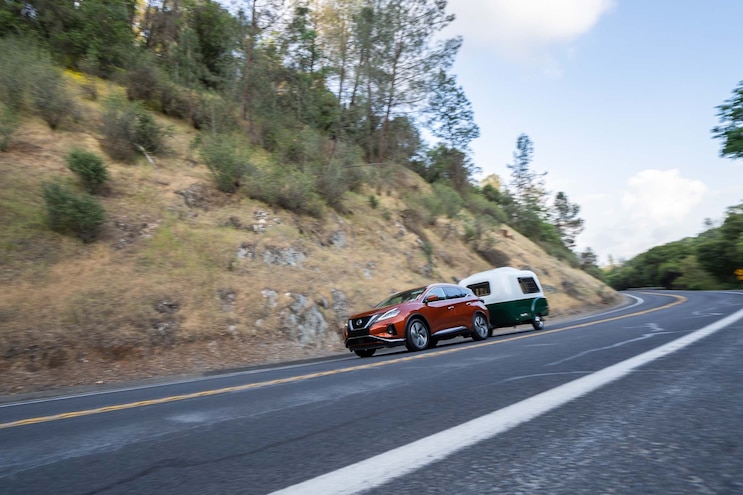 No bones about it, the Murano is still at its best when driving at a sedate pace down the highway. Nissan optimized its most stylish crossover for grand touring rather than backwoods trails or twisting canyon roads. Numb steering, a buzzy CVT, and limited ground clearance all work against it when the road gets zesty or disappears altogether. But drive it like your mother is in the back seat and you'll hear nary a complaint from her. Smooth manners and a cushy ride, even on broken pavement, make it a lovely road trip machine. And Nissan's Zero Gravity seats gave us no qualms, as they're all-day comfortable and found in an interior that's unmistakably Japanese, looking to us a bit like the crossover might belong in a high-end day spa.

We presume a new Murano is likely on its way for 2021 or 2022, based on the modular platform that currently underpins the new-for-2019 Altima. But until that new design arrives, there's a lot to love in the current Murano, graceful and lounge-like as it is.