A DIY Build Taken to the Extreme 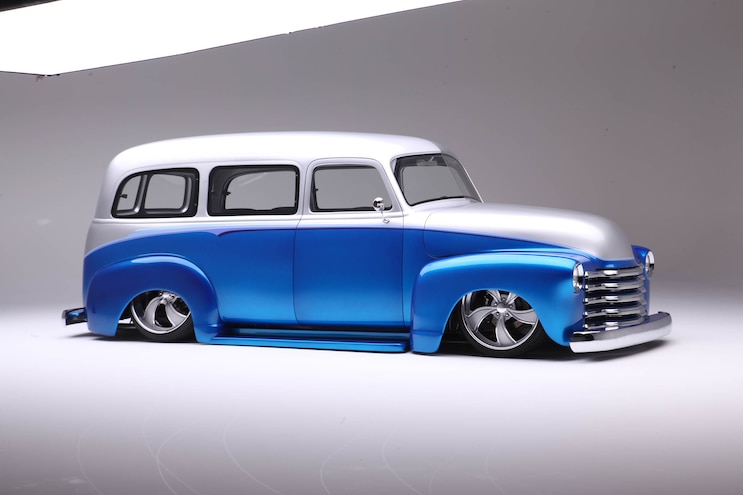 We've been friends with Dennis Sever for a long time now. Back around 2001, when the Brothers Truck Show was still small enough to fit in a school parking lot, we came across Dennis hanging out around his turquoise and white '64 C10. It was a longbed and a small window, but it had a good look and a good stance—and if you remember that far back, you know that there weren't a ton of '60-'66 C10s being built in the first place. We shot the truck for a feature soon after and have been friends ever since.
Several years later, we have been keeping in touch with Dennis and knew what he had up his sleeve, but we were shocked as all hell when we debuted his yellow '53 five-window. The truck was one of the nicest of that body style we'd ever seen, and once again Dennis' truck found itself in front of the camera. This was well over 10 years ago, but he told us back then, while collecting trophies all over town, that he picked up a '47 Suburban, and it was going to be the best one yet. 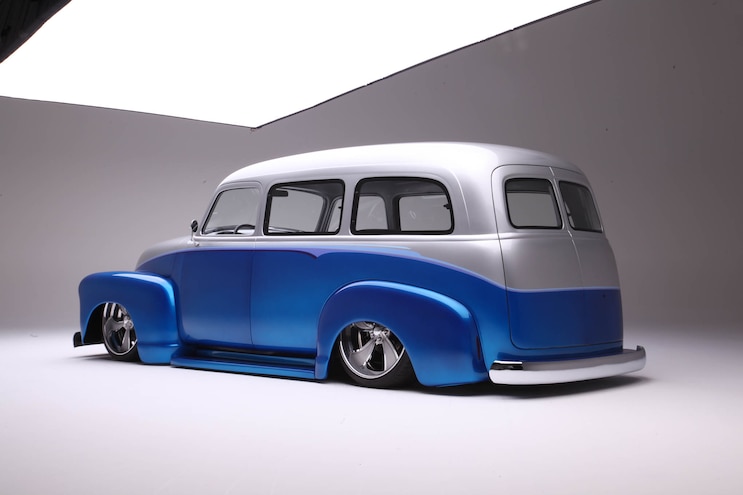 View Photo Gallery | 27 Photos
Photo 2/27   |   1947 Chevy Suburban Best Of Show Rear 3q
A whole lot of time went by before we got to where we are today, but here's the thing, Dennis has never been one to write a check to a shop and wait for a truck to be done before taking it to the next shop. Dennis and his son, Brian, along with their bodyman buddy, Julio, have built about 90 percent of these trucks on their own. That means starting with a bare body and frame and building both well beyond the scope of most do-it-yourselfers. Of course, that doesn't mean that there weren't some shrewd tactics employed to make things easier on themselves. One of those things was the aforementioned Julio. The other was the purchase of a '87 Corvette, which provided its entire drivetrain as well as the front and IRS rear suspension for the Suburban build. 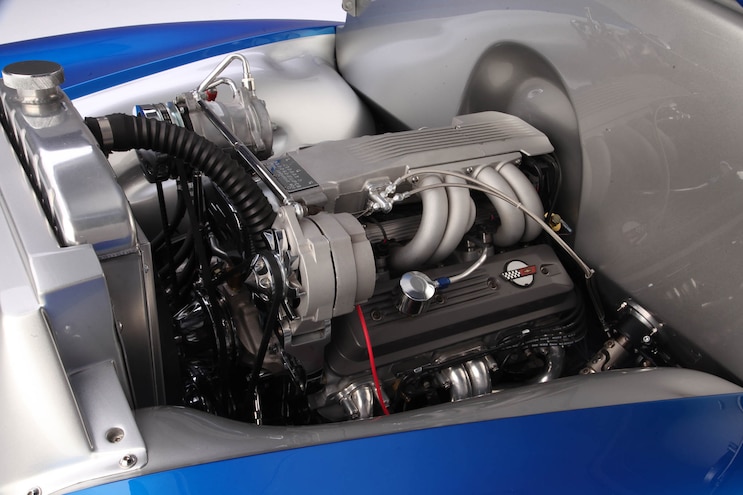 View Photo Gallery | 27 Photos
Photo 3/27   |   1947 Chevy Suburban Best Of Show Engine
Having grown up with his dad owning the famous Long Beach Neon Sign Co. and following in his footsteps with Sever Signs, Dennis is no stranger to custom fabrication work. But even still, he's not a chassis builder by trade and usually only worked on the SUV on Saturdays, stretching the build out over several years. Starting with the bare frame, they built a step notch and boxed it entirely before grafting on the C3 Vette front end and converting it to 'bags. Using the Corvette independent rear suspension in the rear, they built a cantilevered 'bag system in the rear, all the while making sure the chassis would sit flat on the ground when completed. 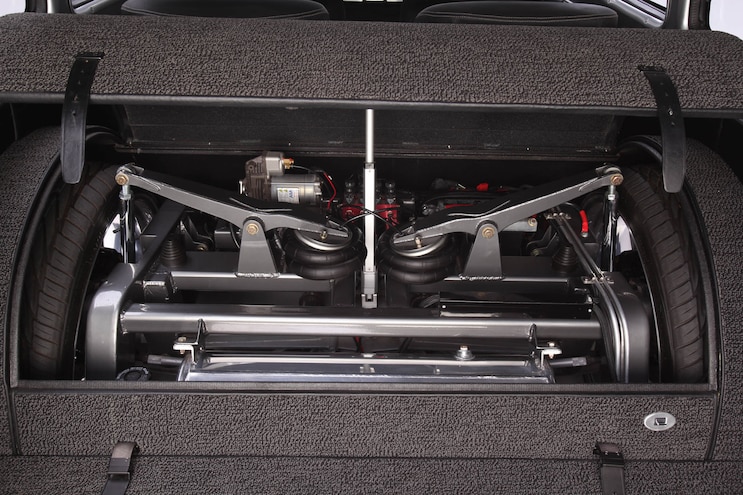 View Photo Gallery | 27 Photos
Photo 4/27   |   1947 Chevy Suburban Best Of Show Suspension
The fuselage of the giant SUV looks pretty intact at a glance, but here again the modifications were extensive. Besides a full shave and frenching of the lights, the doors received the suicide treatment, the hood and fenders had all their seams welded up, and the rear windows were enlarged to match the sides. After a whole bunch more long Saturdays, the House of Kolor Blue and Silver was shot, and all that went back on the exterior was the flush-mount glass and smoothed brightwork.
More of the leftover Corvette went to the engine and transmission shops for freshening up, followed by a lot of detail work and a few performance items. Meanwhile, inside the cabin, a whole lot of smoothing went on—most notably the sheetmetal headliner made from another Suburban roof panel. The dash and center console soon followed, and eventually four Lexus bucket seats and all of the inner panels were covered in black Naugahyde by Ron Mangus. 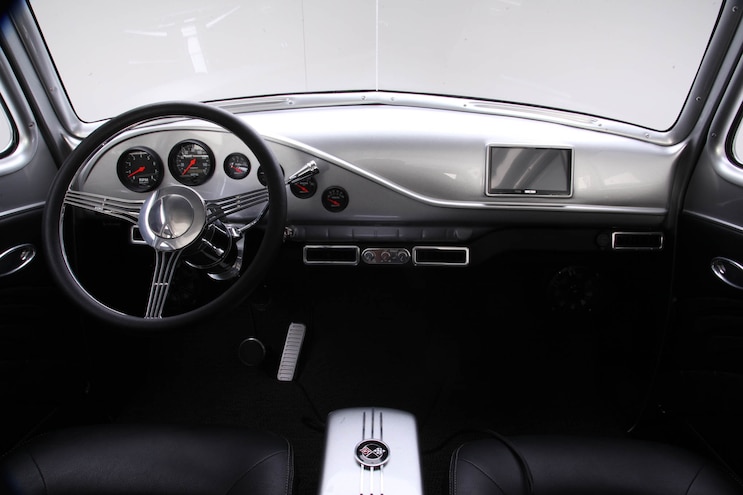 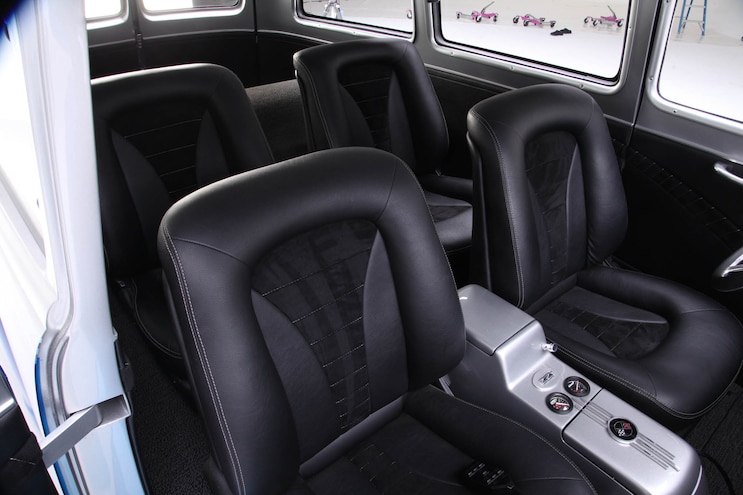 View Photo Gallery | 27 Photos
Photo 6/27   |   1947 Chevy Suburban Best Of Show Interior
It was a long haul from concept to completion for Dennis and Brian on this build, but Dennis is taking it all in stride. He's now spending his spare time traveling around the southwest picking up Best of Show trophies for his great work. And you'd think that would be enough. But recently, Dennis told us he's torn apart the '64 for a complete frame rebuild along with a big window and shortbed conversion. We don't know what the timeline will be on that one, but we know that it'll be in front of our camera when its finished. 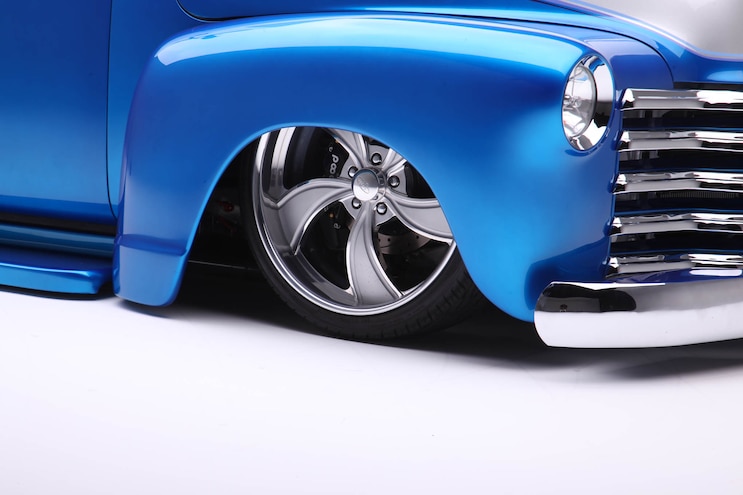