Drilling Deep for a Custom Look 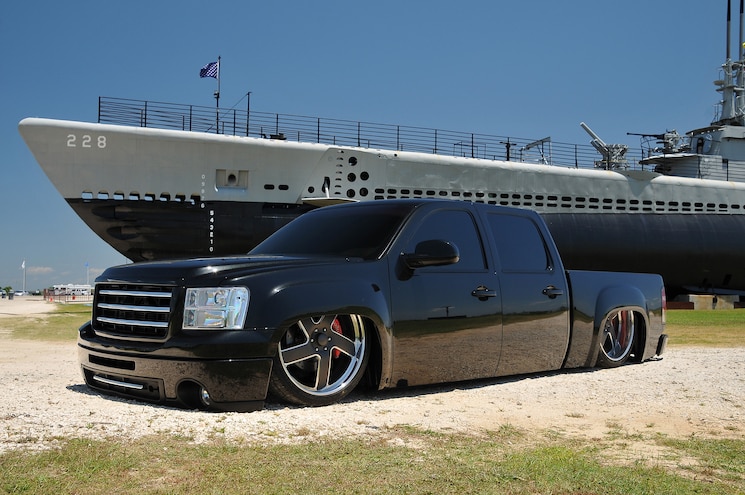 Our employment generally dictates the path in life we take. For instance, if you're in the medical field your path usually involves helping others. Stephen Mehn, of Gonzales, Louisiana, was hired in a very profitable field—the oil field to be exact. The job he got actually required quite a bit of traveling, and while he'd never owned a new vehicle before, it became time for a tough decision. His decision was made to find a reliable new vehicle, and when he saw an advertisement for a dealership that offered a huge discount through rebates he made the purchase on a 2011 GMC Sierra 1500 Bayou Edition.
Stephen had never had a custom vehicle before, let alone a new vehicle, so he hesitated to add anything to the new GMC Sierra, especially since it would be used for work. After six months on the job, the company he worked for gave him a company vehicle and he had no more excuses to leave the GMC stock. The GMC transformation started off mild with some wheels and a drop. After convincing his wife, Kayla, that he had bigger ideas, he started reaching out to builders. 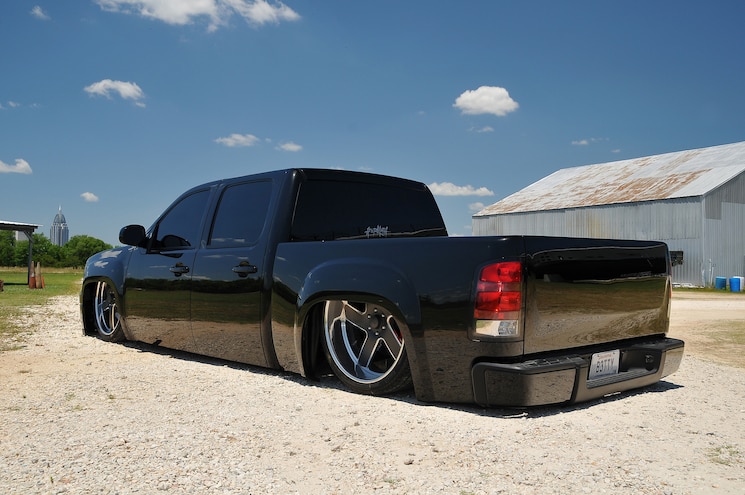 View Photo Gallery | 14 Photos
Photo 2/14   |   2011 Gmc Sierra 1500 Bayou Betty Rear 3q
He met Keith Sawyer, of NFamus Metal Fabrication, in Dallas, Texas, and made an appointment to come in. "I walked in and immediately told him I wanted this truck to be all about details," Stephen tells Truckin, "but nothing over the top." Well that idea didn't last long as Stephen and Keith started going through plans on the GMC. The AccuAir air management setup was added and the new Sierra was now on adjustable suspensions. Keith did some experimenting with the GMC on the control arms and shock mounts.
While Keith had the Sierra and Stephen was overseas in South Korea working on a rig construction project, it was decided that the truck would be body-dropped. Keith was asked to make the preparations for the body drop, yet Stephen also wanted motor work done. Keith added larger notches, larger tubs and a larger firewall to prepare. Stephen has always had a thing for power, so he decided to modify the stock 5.3 but realized quickly that a modified supercharged motor would be near impossible with a body drop. The added work was immense as good friend Cubby Wolf had added all his motor work while Keith had performed the drop. Once the motor was added back in, they realized that it wouldn't fit. Keith had to build custom motor mounts that lowered the motor three inches and to their relief, the hood closed. 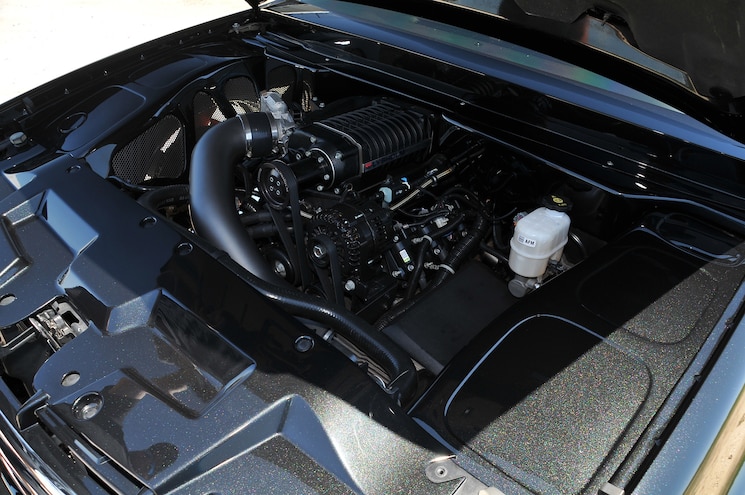 View Photo Gallery | 14 Photos
Photo 3/14   |   2011 Gmc Sierra 1500 Bayou Betty Engine
As black was always Stephen's favorite color, he decided that the shade of black that came on the GMC wasn't dark enough. Stephen enlisted a good friend from high school to find a good painter. The name that came back was Anthony Thibodeaux from ProPaint Collision & Customs. Anthony covered the Jet Black with Ford's Tuxedo Black metallic and then reshaped and corrected the body lines.
After hearing so many horror stories about upholstery shops, Stephen put his faith in Stephen Frederic who happened to live only twenty minutes from his house. Looking to get his name and company some recognition, Frederic's Upholstery, Stephen and his wife, Kayla, decided they wanted something that was unique and had four bucket seats. "I had heard of people chopping the back bench before," Stephen adds, "but I couldn't find any information on it." Although he was told he'd never done it before, Frederic's Upholstery was eager to execute it, along with a custom-designed center console. 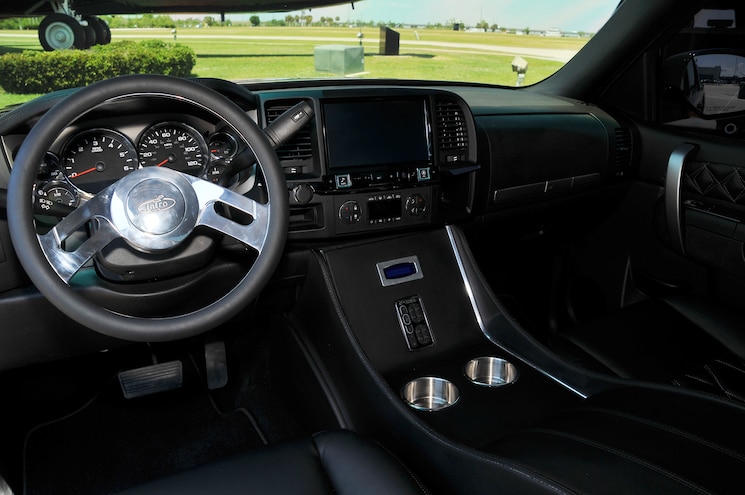 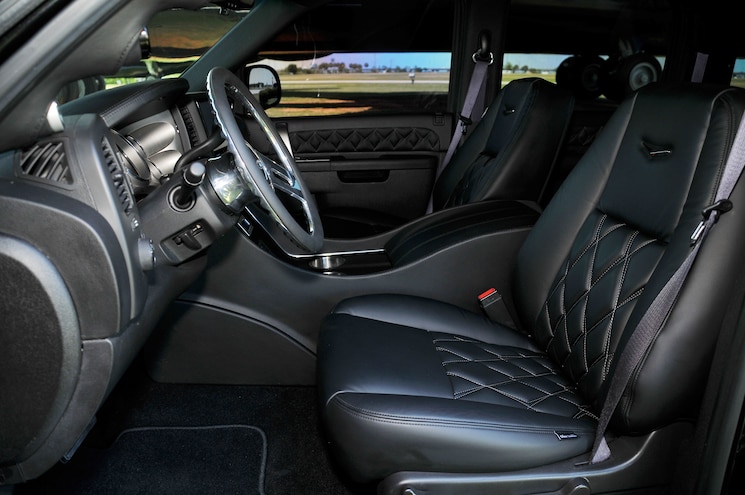 View Photo Gallery | 14 Photos
Photo 5/14   |   2011 Gmc Sierra 1500 Bayou Betty 11
Stephen not only came out of the box swinging on his GMC, he made some integral decisions that led to one of the classiest rides on the bayou. He wishes to thank his beautiful wife, Kayla, for her decision-making throughout the process as well as all her support and love. Without the team he chose to build Bayou Betty, he would have never achieved the heights and drops he has. Stephen debuted the finished product at Battle in Bama outside of Mobile, Alabama, to overwhelming admiration and attention. We were lucky enough to get it in front of the camera on its debut show. 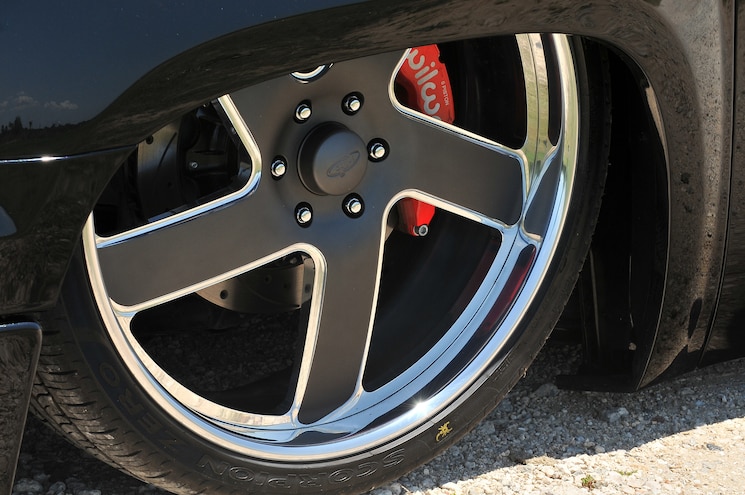