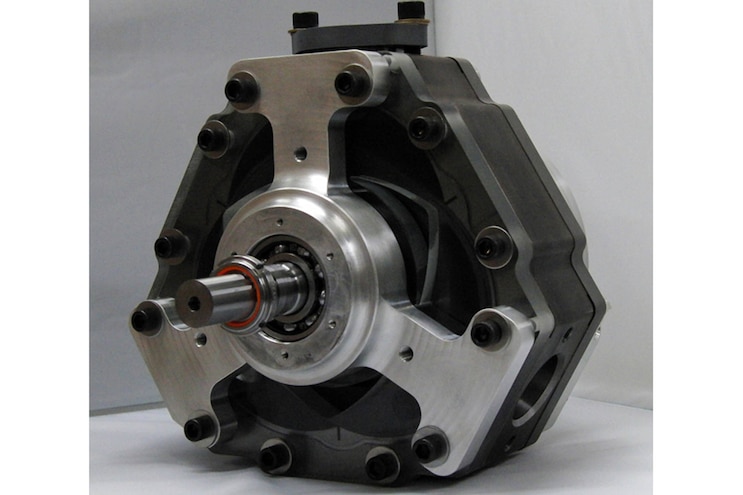 Building a diesel engine that does not use traditional pistons may seem odd, but in today's modern age of high efficiency, low emissions, and weight reduction, an engine with a nonconventional rotor may be the key to things to come.
A compression-ignition rotary powerplant is not a new concept; the idea dates back to around the same period when the first Wankel rotary gas engine was developed (Felix Wankel's first working prototype was 1957). Sharing a basic design with its gas brethren, the Wankel diesel powerplant uses a triangular-like rotor in an oval epitrochoid-shaped housing. This design offers the proposition of an efficient engine with low mass and smooth operation.
The problem that has kept the engine from coming to fruition is the design of the Wankel rotary's combustion chamber, which is elongated and convex. This shape makes it hard to get compression high enough for proper ignition, without excessive heat loss. A source of charged air is needed, but crankshaft or exhaust-driven superchargers draw too much power to be efficient. So, using externally fed compressed air is the only way to get the engine to function. Wankel conceptualized an external supercharger to try to solve the problem. Another issue with the design is getting the combustion chamber correctly angled toward the injection nozzle for a proper air/fuel mixture.

View Photo Gallery | 4 Photos
Photo 2/4   |   LiquidPiston's X4 prototype diesel rotary engine weighs in at 60 pounds and makes an amazing 40 hp. The scalable size and power output make it ideal for applications like Unarmed Aerial Vehicles, range extenders, small vehicles, handheld outpower equipment, and robotics.
Several different companies have worked with prototype Wankel rotary diesels. Daimler-Benz, MAN, Krupp, and KHD started a joint venture called Diesel-Ring but found the design to not be sufficient for diesel. Another company that experimented with rotary is Rolls-Royce. It spent a lot of resources figuring out how to get a rotary to function properly as a diesel powerplant, focusing on using a second, larger rotor to supercharge the main smaller one and ultimately achieve the needed high compression. This two-stage rotor configuration gave the engine an 8-shaped housing. But after many attempts (prototypes) and failures to hit the desired expectations, the concept was abandoned.
Though the rotary diesel never really got beyond the prototype stage of development in the past, the concept has merit. It's a lightweight, compact engine with a good power-to-weight ratio. This quality drew companies like LiquidPiston to the idea.
LiquidPiston's X Engine design is thought of more as an "inverted" Wankel. The seals normally found on the rotor in the Wankel engine are incorporated into the housing. The X operates on a new thermodynamic cycle and solves the sealing, cooling, lubrication, emissions, and efficiency challenges found in the original rotary design. This new cycle is the company's High Efficiency Hybrid Cycle. 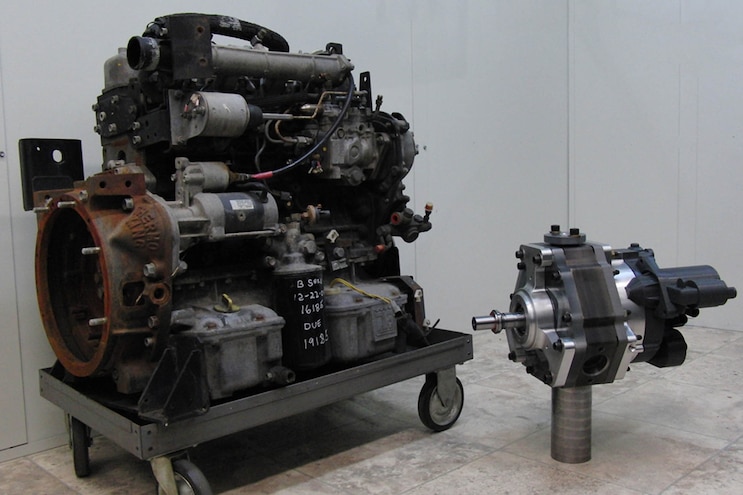 View Photo Gallery | 4 Photos
Photo 3/4   |   There is a considerable size difference between the conventional 35hp diesel on the left and the LiquidPiston 40hp rotary diesel on the right.
The HEHC combines the advantages of Diesel, Otto, and Atkinson thermodynamic cycles. For maximum efficiency, HEHC compresses air to a high ratio, directly injects fuel, and ignites compression. The dwell (flat area) near top dead center forces combustion to occur at nearly constant-volume conditions, which creates greater expansion volume than compression volume. This means the air-fuel mixture ignites like a diesel and burns much longer than normal, which provides a more complete combustion. Emissions are reduced and high chamber pressure acts on the rotor until it almost reaches atmospheric pressure and nearly all available energy is used before reaching the exhaust port. In contrast, a normal internal-combustion engine releases energy-filled, high-pressure exhaust gas.
Another element of HEHC is cycle-skipping, which modulates power and promotes high efficiencies at low power settings, while simultaneously cooling the engine's wall internally and providing partial heat recovery. With a design that converts so much more heat energy into mechanical force, the engine block needs less heat removed, which means there in no need for a water-filled cooling system. If the engine does need to be cooled, an injection event can be skipped, and just cool air can be sucked in to remove heat. Another option is for water to be injected to internally cool the engine. Some of the cooling energy is then recovered as the water turns to steam, increasing chamber pressure. 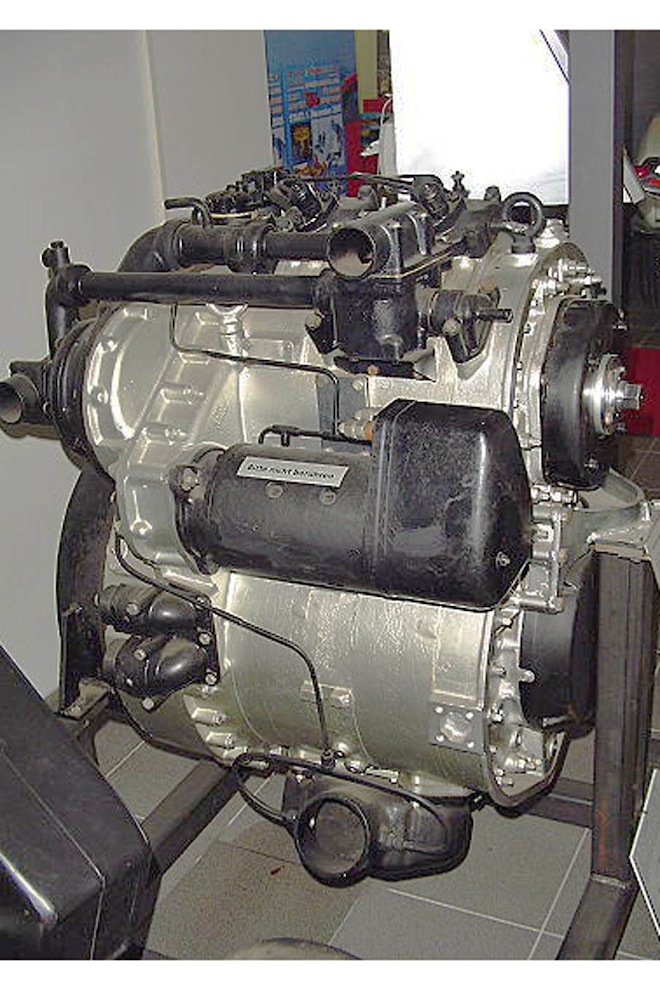 View Photo Gallery | 4 Photos
Photo 4/4   |   The Rolls Royce two-stage rotary diesel engine is a very unique, 8-shaped design. A larger rotor is used to supercharge a smaller one in order to achieve sufficient compression.
There are few moving components in the X Engine. It has a rotor (the primary work-producing component) and an eccentric shaft. The only other parts doing work are the injectors, fuel pumps, and oil pumps, making the engine extremely simple. There are three combustion events per rotor revolution, which results in high-power density.
LiquidPiston's current 40hp model (X4 prototype) only weighs 80 pounds. The production version is to weigh less than 50 pounds. They are shooting for approximately a 1hp-per-pound engine. In comparison, a conventional 40hp diesel engine weighs about 400 pounds.
Ultimately, X engines can be made to produce anywhere from 1 to 1,000 hp, making them ideal for use in a variety of combustion-engine markets (generators, auxiliary power units, Unmanned Aerial Vehicles, range extenders, handheld outdoor power equipment, small vehicles, and robotics).
SPECIFICATIONS
Engine: LiquidPiston X4 Prototype
Displacement: 750cc
Engine Layout: Rotary
Compression Ratio: 16:1 up to 26:1
Power: 40 hp
Fuel System: Direct injection
Dry Weight: 80 lbs (1,490 kg)
Length: 11 inches
Width: 7.9 inches
Height: 7.6 inches