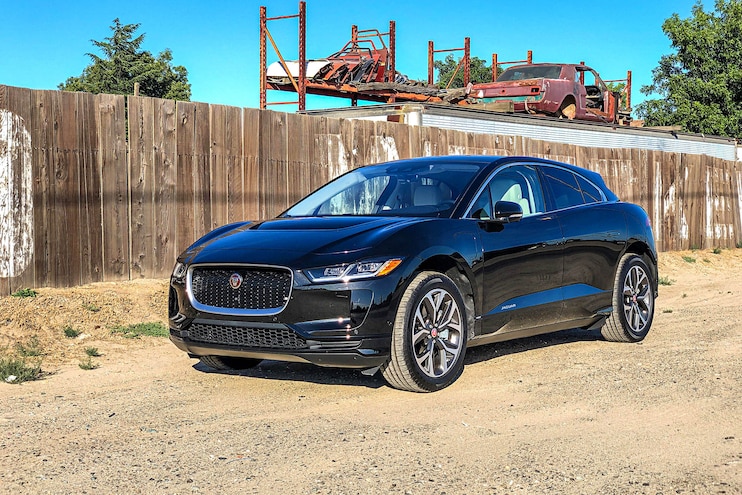 The age of electrification is upon us. It seems everywhere we turn, there's a new hybrid model or rumors of full-electric versions of popular pickups. As unpopular as this may be to us truck traditionalists, these fully electric vehicles are looking more and more to be the future of the automotive industry. In our humble opinion, that's not all a bad thing. Electric vehicles often bring with them outstanding performance specs, such as blisteringly fast acceleration and loads of torque. And gone is the dorky styling of the early electric cars of the '80s and '90s. These days, they are right up there on the top tiers of style and elegance.
As we see it now, the two largest barriers to entry are price and range. The higher-end electric vehicles tend to have a longer range, but that comes with a higher price tag. And the inverse is true for the lower tier. So, while we sit around and wait for the costs to come down and the technology to improve, we figured we'd perform a little range test with our current favorite EV, the Jaguar I-Pace. 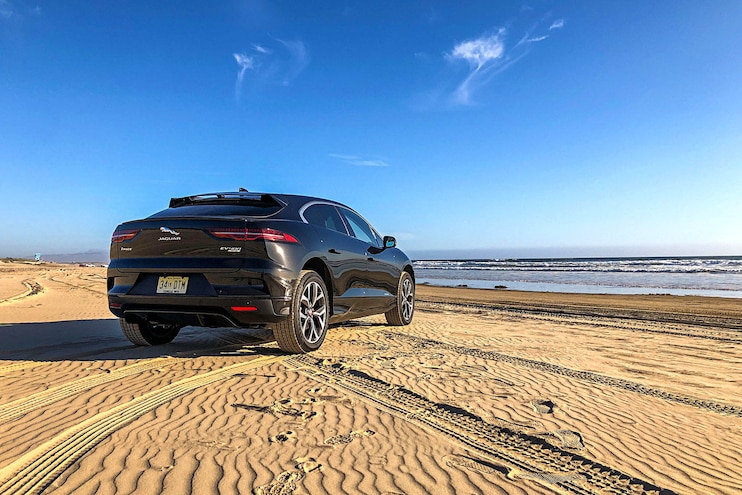 View Photo Gallery | 40 Photos
Photo 2/40   |   Road Test 2019 Jaguar I PACE Rear 3q
Introduced a year ago as a 2019 model, the Jaguar I-Pace has a long list of impressive features and stats. The I-Pace is equipped as standard with all-wheel drive thanks to a pair of electric motors (one fore and one aft) that produce 394 hp and 512 lb-ft of torque. With all that torque available at 0 rpm, the I-Pace is able to race from 0 to 60 mph in just 4.5 seconds (per Jaguar), and it has a top speed (electronically limited) of 124 mph. Providing power is a 90-kWh battery pack that is EPA rated at 234 miles of driving range. All this comes at a starting price of just $70,495, though that price quickly climbs to nearly $90k as options are selected.
To satisfy our biggest curiosity, we set off on a 1,000-mile road trip from our World Headquarters in Los Angeles, California, up through the state's Central Valley, to the San Francisco bay area, and back again. We downloaded the latest EV charging apps, thoroughly mapped our course, and set off early in the morning. 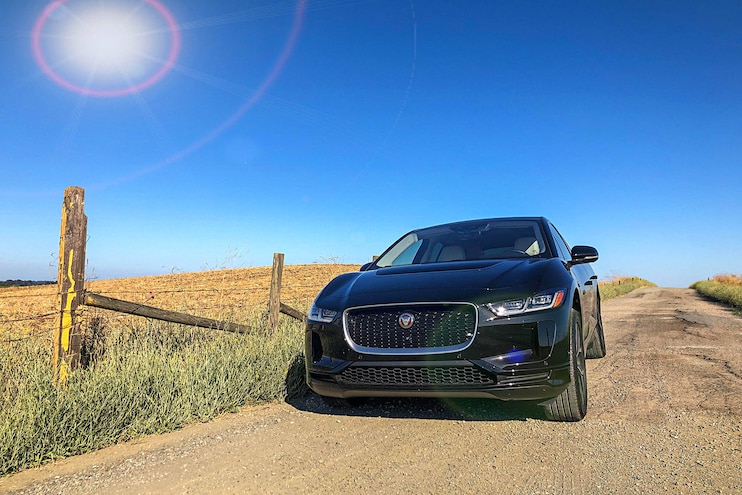 View Photo Gallery | 40 Photos
Photo 3/40   |   Road Test 2019 Jaguar I PACE
Using Jaguar's provided 110-volt charger, we topped off the I-Pace's battery to 100 percent the night before. Upon firing up the Jag on the day of our journey, the dashboard noted a range of 235 miles. Our route took us out of Los Angeles to our first charging opportunity in the city of Bakersfield. Situated in a Walmart parking lot was an EVGO Level 3 charger. We plugged in for 45 minutes and picked up 37.477 kWh of electricity, or about a third of a tank in truck terminology. Notably, the 130-mile journey only used up 100 miles of anticipated range. Things were looking good at this point.
Our next charge came 134 miles later, this time in a local grocery store parking lot. There again sat a pair of EVGO Level 3 DC fast-charging stations, empty and ready to refuel our Jaguar. This time, the car was notably lower, indicating only 22 miles of additional range remaining. We stayed attached to the cord for 67 minutes and picked up 44.320 kWh of juice, or right at half a battery worth. This bumped range up to 130 miles. 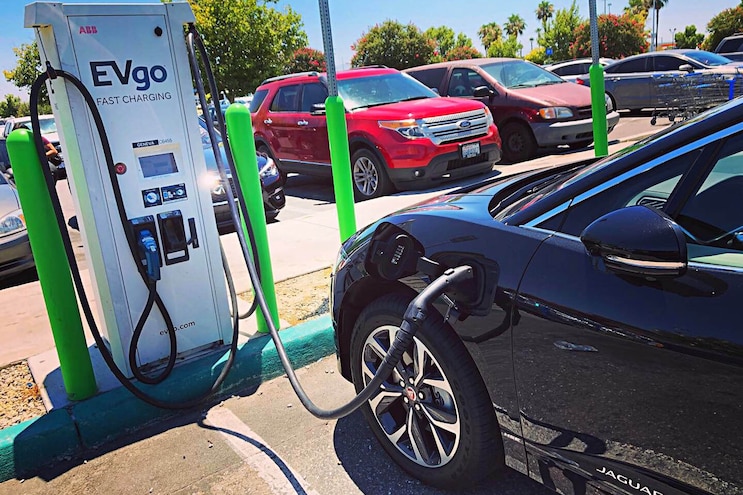 View Photo Gallery | 40 Photos
Photo 4/40   |   Road Test 2019 Jaguar I PACE Charge
We finished out the first leg of our trek by pulling up to the Level 2 charging station provided by the Hampton Inn hotel we chose to stay at, well, because they had a Level 2 charging station. This is where things started to get painful, as the shared Level 2 charger was only able to add 53.030-kWhs to the battery despite the Jag being plugged in for 13 hours. It was at this point that we finally began to feel like we were chasing our tail, as the range anxiety was starting to set in.
After spending a day in town, we returned to the hotel for night two only to find the charging station full. Upon talking to the owners of the Chevy Bolt and Tesla Model 3 parked there, we found out they live in the town and use this charger instead of a home one. And adding even more insult, we found a Mitsubishi Outlander PHEV sitting in the spot with the plug on the ground. This felt to us like the equivalent of leaving a Prius unattended blocking the only diesel pump in town, for 24 hours. It's just plain inconsiderate. 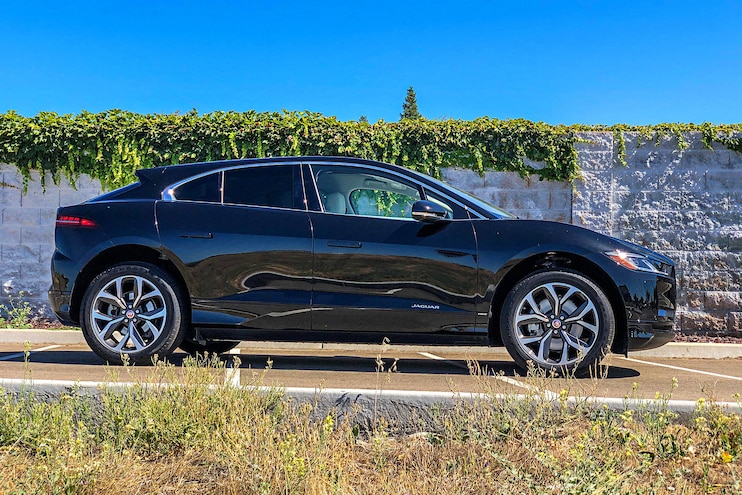 View Photo Gallery | 40 Photos
Photo 5/40   |   Road Test 2019 Jaguar I PACE Side View
No worries, however, as we still had enough juice to continue on down the road in search of a fast charger located outside the mall in the town of Merced. We charged a few more times as we headed from the Valley toward the coast. And despite the long charge times, we were never dangerously far from a charging station, and they were never busy. We used the charging time to either eat lunch, use the restroom, or browse through Walmart's ever-amusing collection of seasonal items. Up until now, the charges had been fairly reasonably located.
We spent two days in the San Francisco area before it was time to turn back south. And as if an omen of what was to come, this is where our EV experience turned south as well. Covering a distance of 494.3 miles took us seven stops to charge. During this long day, we encountered charging stations that were out of service, ones blocked by parked vehicles that were done charging but still plugged in, and stations with lines of several vehicles waiting for their turn at the machine. What started out so promising turned into a severely frustrating experience. The drive ended up using 173.346 kWh of electricity, or nearly two full batteries worth. 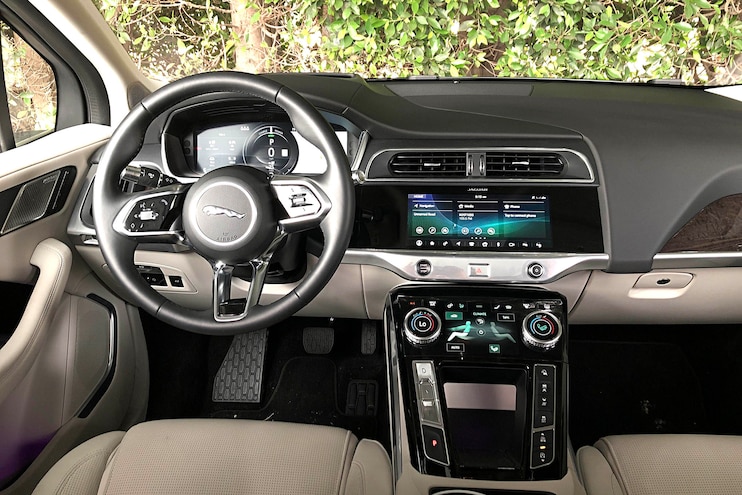 View Photo Gallery | 40 Photos
Photo 6/40   |   Road Test 2019 Jaguar I PACE Interior
The I-Pace itself is a wonderful vehicle. It impressed every person who rode in it and even scared a few of them with its powerful acceleration. We tested out the all-wheel drive and low-traction launch modes, along with every other available feature. The drive-select buttons, instead of the typical shifter or knob, took some getting used to, and hammering on it in Dynamic mode was loads of fun despite the hit to battery life. Not to beat the proverbial dead horse, but we still aren't fond of the Touch Pro Duo system, though the addition of Apple Car Play was welcome, and we are lifelong fans of the Meridian audio system. Even with two adults and two kids, there was still ample storage space for gear, including a large double stroller.
Our biggest takeaway from the endeavor was this: Electric cars may be getting close to mainstream, but until the charging infrastructure catches up, they aren't really a viable family travel option. If you charge at home and have a commute that's within the vehicle's range, there's no reason not to own an EV. But with how sprawling the United States is and with our fantastic highway system, if you plan to explore outside your home metropolitan area, you'll still need to own a gasoline-powered vehicle as well. 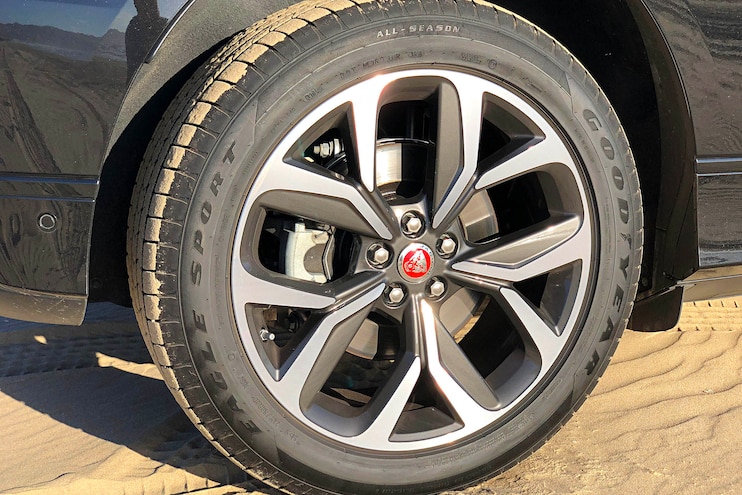 View Photo Gallery | 40 Photos
Photo 7/40   |   Road Test 2019 Jaguar I PACE Wheel
We spent dozens of hours planning a route that would accommodate the range of the I-Pace. At one point, we even had three apps running to find EV charging stations. It was through the planning that we found just how limiting owning an EV still is. For example, we couldn't drive on I-5 through Central California, as there weren't enough charging stations, making one of the two main highways through the state essentially off-limits. Then there was the waiting at the stations. If the charger was occupied, you could bet each patron was intending to use his full 45-minute time limit. This turned out to be a big issue, as our day dragged on and on. And lastly, we found the location of the charging stations to be an issue as well. While gas stations are on virtually every street corner, many of these electrical juicers were far out of the way, and we found ourselves several times sitting in the back corner of dimly lit parking lots late at night. Safety was certainly a concern.
So, while we're ready and waiting for the electric vehicle revolution, we doubt we'll see it in our lifetime. The infrastructure simply doesn't exist. Until it does, however, we'll keep playing with the fantastic vehicles that exist now, like the 2019 Jaguar I-Pace. And we'll wait with bated breath for whatever is to come next.
2019 Jaguar I-Pace HSE
Base price: $80,500
Price as tested: $86,771
Engine: Dual electric motors
Transmission: N/A
Horsepower: 394 hp
Torque: 512 lb-ft
Towing capacity: N/A
EPA fuel economy rating: 80 city/72 hwy/76 comb. MPGe (44 kW-hrs per 100 miles)
Actual calculated economy: 44.28 kw-hrs per 100 miles
Miles driven: 981 miles

- OF
By Jason Gonderman
644 Articles