Inspiration Comes From the Strangest Places 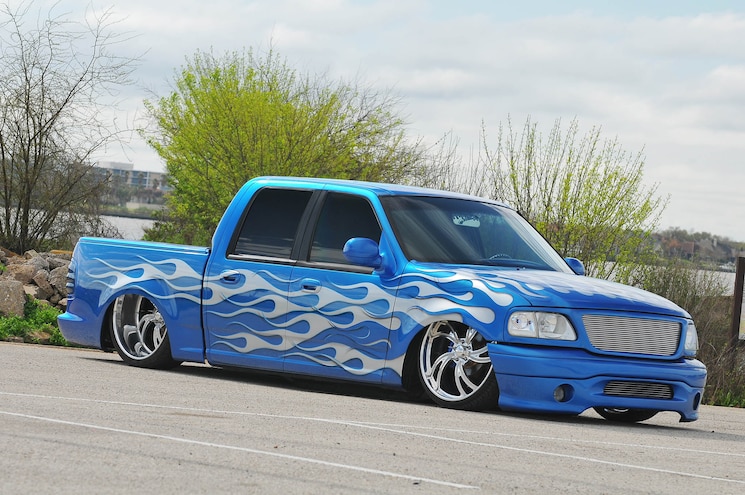 There is a level of respect truck owners get when they purchase a truck and form their own flavor and custom creation. For those truck owners that purchase a ready-made truck and rock it the way they bought it, it's not usually looked at as creation among the community. There are many reasons why someone would purchase a truck already built: either it's the owner's lack of build knowledge or simply the time it takes to build isn't feasible. For Ramon Ibarra Jr., of Weslaco, Texas, he struggled with that exact notion of creative ownership throughout his life.
Growing up in Florida and moving to Texas at driving age, Ramon was given his first truck by his father, Ramon Sr. "It was a Chevy Suburban on 22s with a system," Ramon remembers, "I wasn't sure what to do to with it, but I loved the way it looked." His Suburban didn't last long as it was involved in a rollover accident one early morning. It was time to find another vehicle for Ramon, so he began his search. He was in the passenger seat of his father's car when he saw a Ford F-150 driving by with a "For Sale" sign on it. He knew he wanted the truck, so he followed him and inquired about the price. 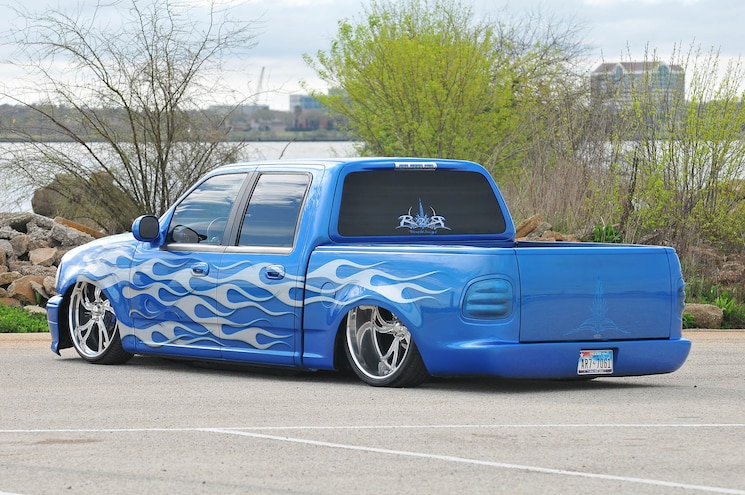 View Photo Gallery | 18 Photos
Photo 2/18   |   2001 Ford F 150 Supercrew Blue Demon Rear 3q
Once Ramon was able to purchase the 2001 Ford F-150 that already had an air-ride suspension and 22-inch wheels, his dilemma began of whether he should leave it the way it was or design a new style that was all his own. Although the stock green and air-ride suspension were solid, Ramon knew it needed to go under the knife to represent what Ramon had envisioned. His first purchase was a set of Intro Spyder 26-inch wheels for the Ford, however, the air ride on the truck wouldn't work with the larger wheels. 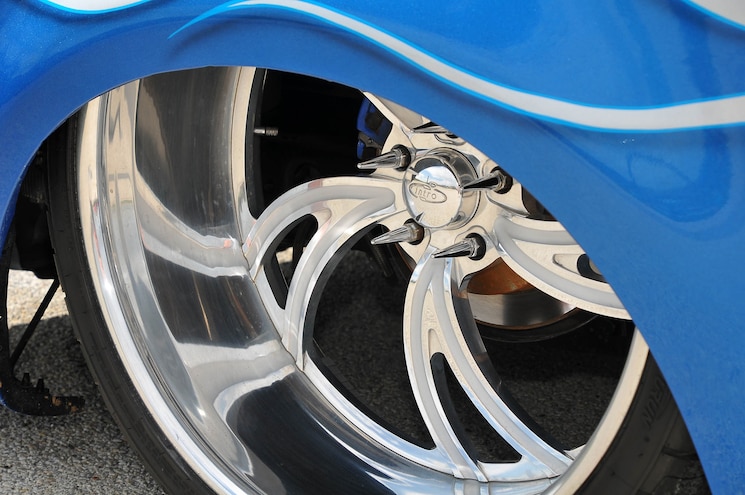 View Photo Gallery | 18 Photos
Photo 3/18   |   2001 Ford F 150 Supercrew Blue Demon Wheel
Ramon and his father carefully removed and replaced all the hardware as well as cutting the inner fender and adding custom control arms. The 'bags were on the rear axle, so they were relocated for a lower clearance. Big H from Big H Customs added the body drop to the Ford. Now that the Ford was brought to the ground even lower with larger wheels, Ramon decided it was time for a complete color change. Inspired by a Bud Light beer can, Ramon contacted Tony at TC Autoworks, and they began the process of the House of Kolor Stratto Blue mixed with silver flames.
Once the new color was completed, Ramon began the interior blending by having Tony paint and fabricate a new dashboard along with door panels. Classic Trim was enlisted to wrap the seats of the Ford in Katskin Pacific Blue. Aztec Audio built a custom subwoofer box and mounted it in place of the back seats. Ramon and his father completed the audio install wiring and placement. Under the hood, Ramon and his father installed the Power-Aide for the throttle body as well as a K&N air intake system for better performance. TC Autoworks built a custom motor cover with sheetmetal and bead and roll for a sharper appearance. 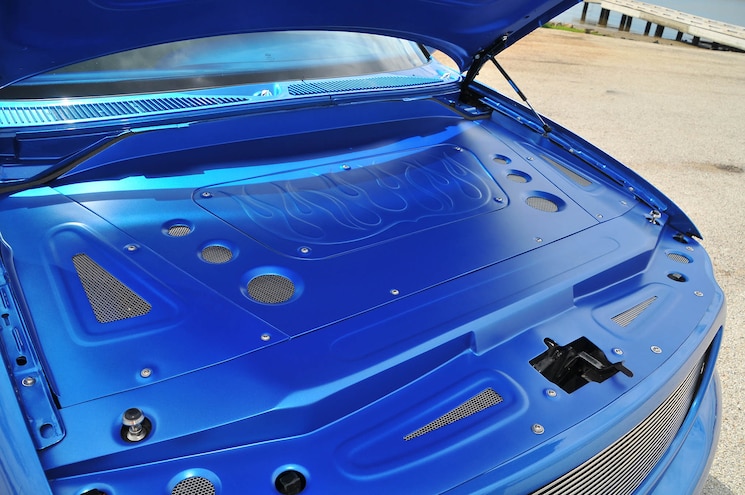 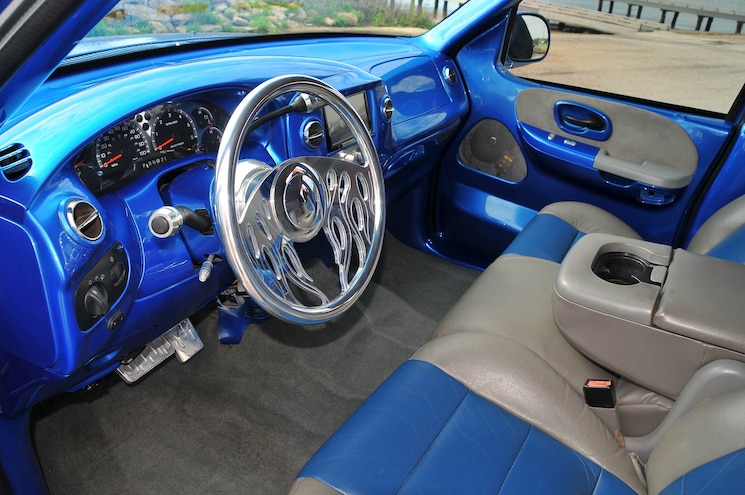 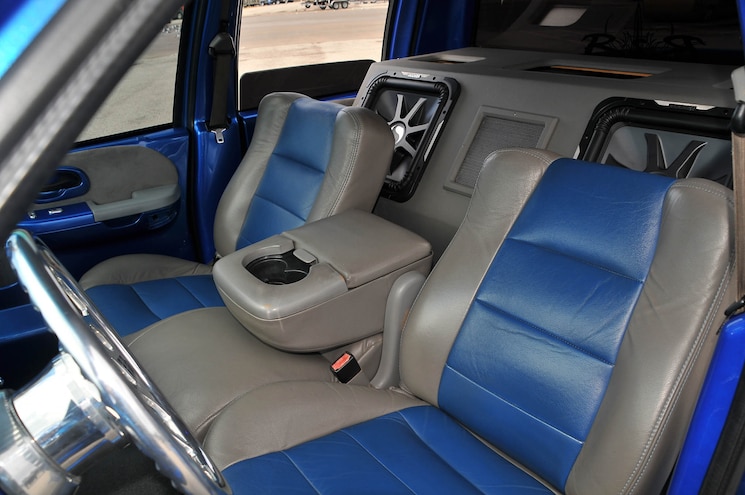 View Photo Gallery | 18 Photos
Photo 6/18   |   2001 Ford F 150 Supercrew Blue Demon Interior Seats
Ramon credits his motivation to his wife, Christina, and their two kids Ramon III and JennessaMae. Their love and support kept his head in the game and allowed him to focus on the Ford F-150. Ramon's goal has been to share his ride in Truckin since his childhood of reading those magazines at supermarkets. It's been a long road since the purchase, but his pride and dedication are visible in his custom Blue Demon build. Ramon has two custom trucks that he is currently building for his children so they can carry on the passion that has fulfilled his heart all these years. 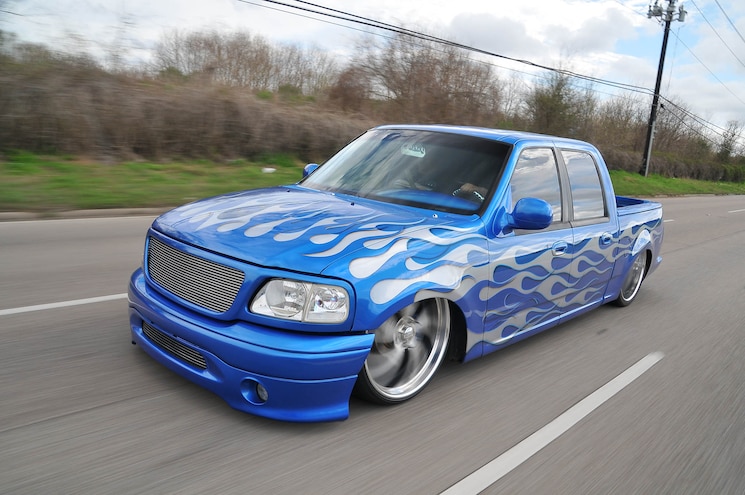