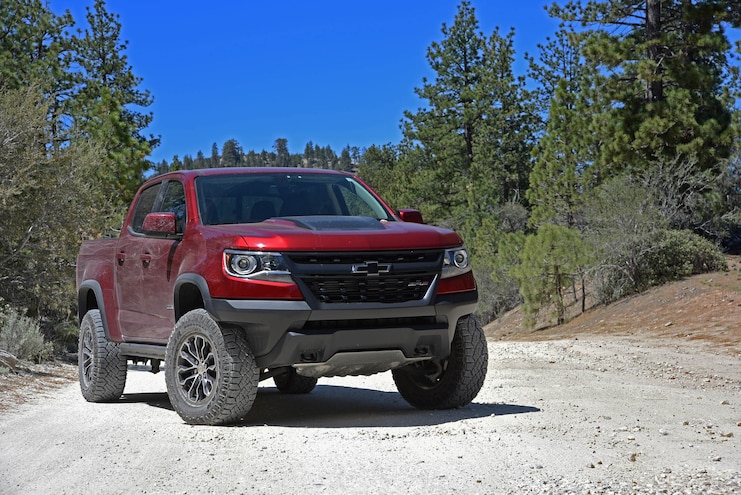 We've been driving our long-term 2018 Chevy Colorado ZR2 crew cab for a year, and we can now look back on all the miles and hours engaged in piloting it over rocks, dirt roads, mud, gravel, sand, and even snow from a more analytical viewpoint than in those early days of first getting to know the truck. To make sure we had a complete picture of the Colorado, we also spent some serious time methodically doing the mundane but necessary chores a pickup truck would tackle—driving to work; highway miles; and runs to the grocery, hardware, and auto parts (not for the ZR2) stores.
Let's start at the beginning. We first saw the "concept" in 2014 and enthusiastically applauded it. When a production vehicle was finally available, it quickly became evident that it was a very successful attempt to leapfrog over the current midsize truck technology. Chevy brought about forward-thinking concepts such as Multimatic shock absorbers, a purely unregulated (no electronics) off-road driving mode, and real electronic lockers front and rear. 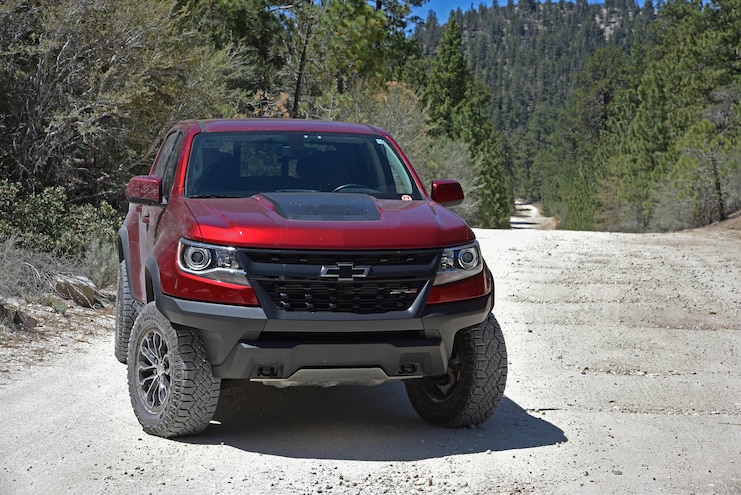 View Photo Gallery | 6 Photos
Photo 2/6   |   002 Colorado Zr2 Long Term Report 4
During these many months of testing, we spent a lot of time working out the suspension system. The ZR2 sits 2 inches higher than a non-ZR2 Colorado, and it offers the Multimatic spool valve shocks—off-road racetrack technology that until now was not used on a factory pickup. On wide-open desert dirt roads, the ZR2 performed like a champ, hooking through corners under complete control with limited body roll and negotiating small whoops at decent speeds with no trouble at all. The Multimatic shocks did their job and gave little opportunity for the body to get out of shape. We did find that, as with most pickups, some weight in the bed settled the rear suspension down a tick; after all, one of a truck's prime design directives is to haul cargo. The front end could be a bit stiff but livable, probably sprung for the heavier engine and the expectation of additional weight in the form of accessories placed on the nose.
The other big news regarding this truck was the 2.8L Duramax engine. Overall, we were pleased with its performance. Once we got past our own learning curve with this specific vehicle, the slight turbo lag could easily be compensated for in almost all situations with precise throttle positioning. Through the rough stuff and when the going is slow, careful throttle control and light brake work (both in smooth doses) were most important in making the Colorado ZR2 work well. However, in sand or mud, wheel speed had to be maintained with a little heavier but still managed foot on the throttle—enough power to maintain forward momentum and stay on top of the terrain, but not so much power that the Goodyear DuraTracs dug through and began to sink. 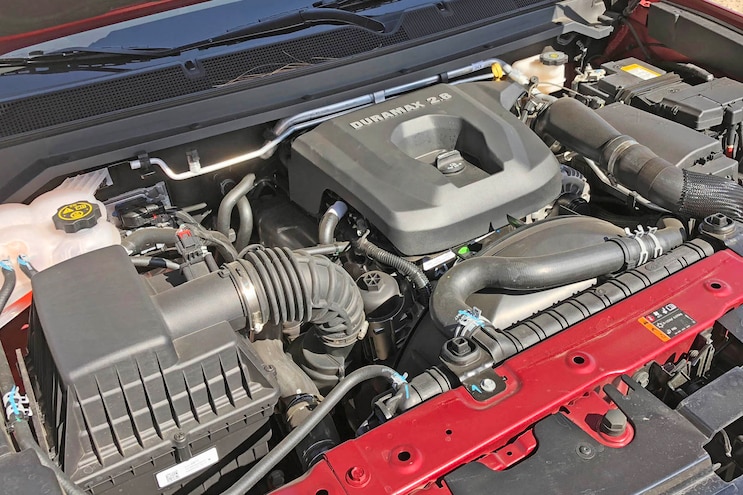 View Photo Gallery | 6 Photos
Photo 3/6   |   The Duramax 2.8L V-6 turbodiesel in our 2018 Chevy Colorado ZR2 crew cab delivered a very respectable average of 21.2 mpg during our last months of testing, and with appropriate footwork, it cranked out plenty of power when needed.
There are always pros and cons of every rig we spend a lot of time with. The truck bed's fixed-position GearOn mounting tabs mean less cargo flexibility, and the bed offers no power outlet. The sound system could use more punch, but we really liked the overall comfort and functionality of the interior. The crew cab actually fit four adults without feeling like we paid for first class but got coach seats on the airplane. And finally, the rear seat folds up or forward to expose a flat cargo platform.
Good handling and performance, good visibility, a comfortable and easily controlled interior, and loads of tech goodies kept us happy with this truck. During this entire yearlong test, the 2.8L Duramax averaged 21.5 mpg, with a best tank of 23.5 mpg on a nonstop highway slog and a worst tank of 18.2 mpg. The truck also delivered enough real trail-rig goodies like responsive suspension, aggressive tires, skidplates, rock rails, and no-nanny off-roading. And those electronic lockers kept us from getting stuck more than once. When you get right down to it, the 2018 Chevy Colorado ZR2 crew cab gave us all the basics we needed for navigating almost every type of terrain, from the road we take to work to the two-tracks and trails we spend weekends exploring. 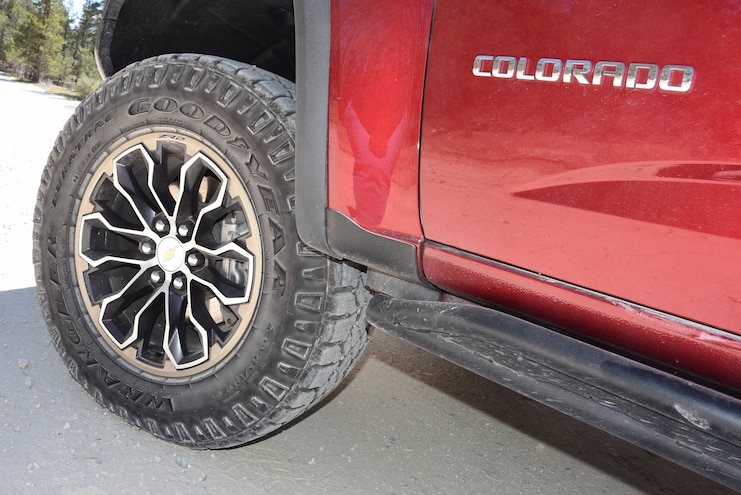 View Photo Gallery | 6 Photos
Photo 4/6   |   Shod with 265/65R17 (30.6-inch) Goodyear Wrangler DuraTrac tires, the Colorado ZR2 was able to stick to or grind through almost everything we encountered. When they couldn't go it alone, the front and rear lockers made all the difference. Having the heavy-duty, full-length factory sliders helped keep trail rash to a minimum. 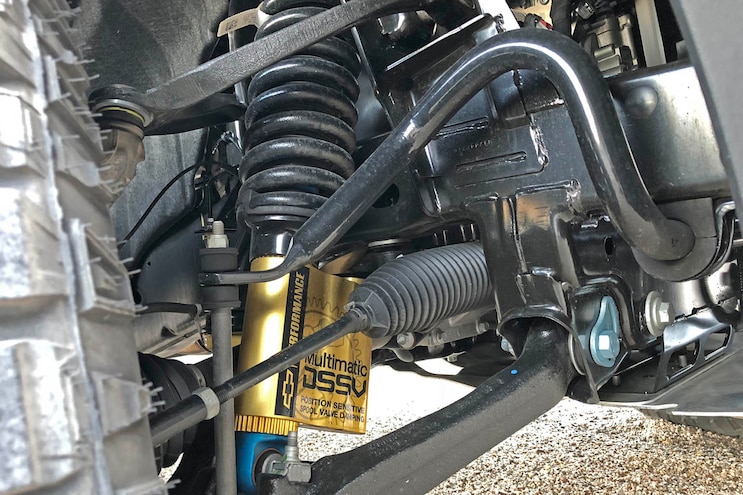 View Photo Gallery | 6 Photos
Photo 5/6   |   The technological gem of the ZR2 was the set of Multimatic DSSV spool valve shock absorbers. Working to soak up some pretty hairy bumps while whooping it up on open desert dirt roads, they also helped us tiptoe through some rough spots. 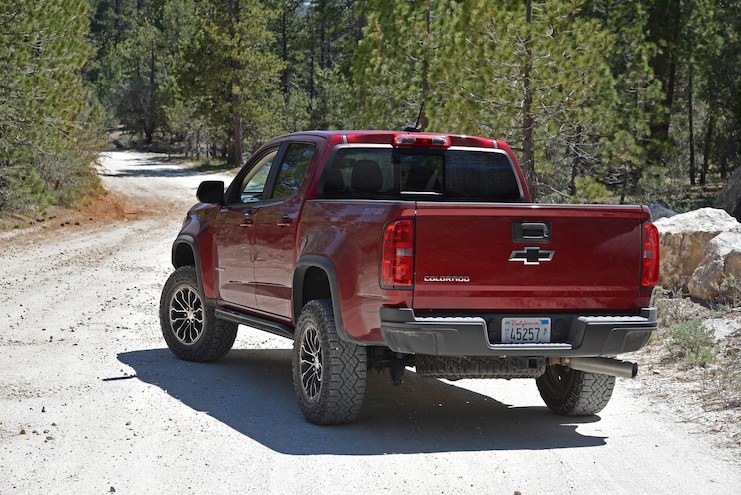 - OF
By Stuart A. Bourdon
7 Articles