Off-Road with the 2020 Toyota Tacoma and 4Runner TRD Pro 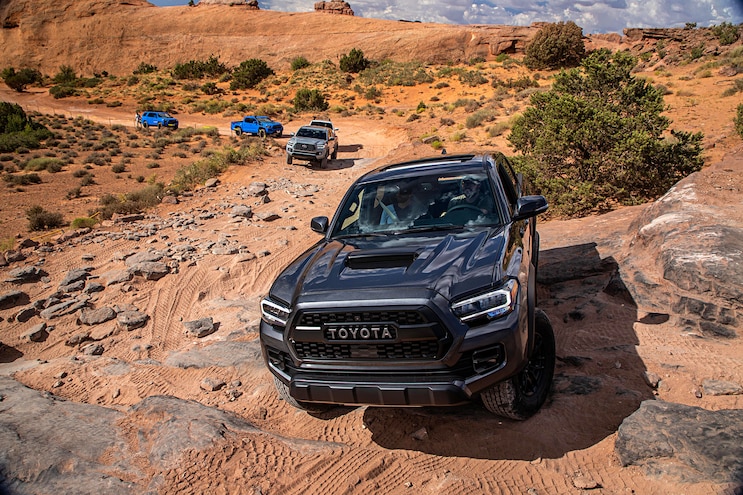 In this cynical, electronically anonymous world, it seems like every time we mention Toyota, we're met with snickers and snide remarks. And look, part of what those Facebook commenters say is valid—the Toyota Tacoma and 4Runner are some of the oldest vehicles in their respective classes, and they do suffer a bit for it. But with age comes wisdom and, typical of Toyota, reliability. And although the automaker rarely completely revamps its body-on-frame pickups and SUVs, it does invest nearly continuous small improvements into the lineup, making its trucklets far more competitive than their genealogy would suggest.
To wit: the 2020 Toyota 4Runner TRD Pro and Tacoma TRD Pro. The former was updated for 2019 with a new suspension setup featuring Fox 2.5-inch internal-bypass shocks, and for 2020, the midsize SUV gets standard Toyota Safety Sense-P (TSS-P) across the trim lineup. And the Tacoma TRD Pro has been mildly retuned to take advantage of new, forged 16-inch wheels that lighten each corner by 4.2 pounds. And finally, the Taco gets a height-adjustable driver seat—the lowest position offers enough thigh support (just barely) for this 6-foot driver, a vast improvement over the old helm.
Claiming notable convenience, comfort, and driveability advances over the 2019 midsize TRD Pro lineup, Toyota invited us to join in on a little off-road adventure spanning Utah and Colorado, terminating at FJ Summit. Surprisingly, the mild upgrades suit both vehicles very well. 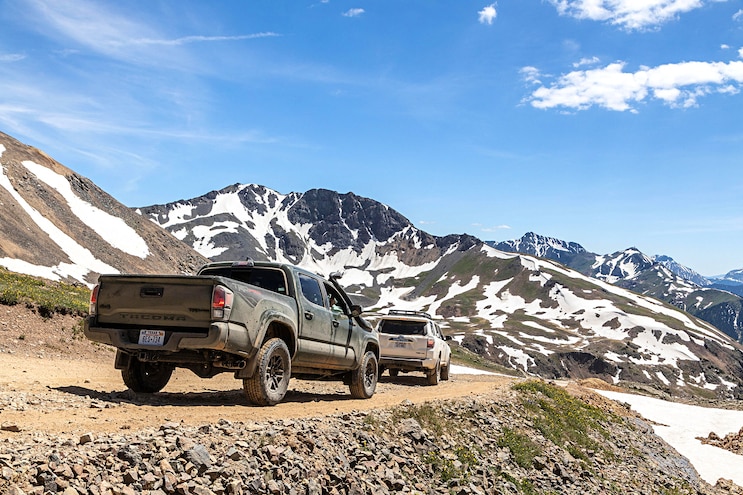 View Photo Gallery | 15 Photos
Photo 2/15   |   Off Road 2020 Toyota Tacoma And 4Runner TRD Pro
Taking Revenge
Our first day in Moab, Utah, consisted of a relatively challenging out-and-back drive through Hell's Revenge. We started behind the wheel of a Tacoma, eager to see if we could notice the retuned suspension and lighter wheels. And on the relatively slow, undulating, sandy trail, they did indeed seem to offer improved ride-and-handling composure, though we'd have to wait a day to see if they quelled the pogo-stick motions of the 2017-2019 Tacoma TRD Pro. What's more, the Toyota's sure-footed traction-management system and aggressive Goodyear Wrangler All-Terrain Adventure tires provide plenty of grip on the red slickrock and silty dust that comprises Hell's Revenge.
Although we made the most of our years of off-road experience and had dedicated spotters on hand to guide us through tricky sections of the trail, our Army Green Tacoma helped out thanks to its new Panoramic View Monitor and Multi-Terrain Monitor camera system. The spate of cameras can display a 5-second projected path on the infotainment system, easing the nervousness that can accompany cresting a ridge or traversing a blind ditch. However, we must admit the projection is saddled with pretty low resolution, meaning we'd be very hesitant to pick lines solely with the cameras. 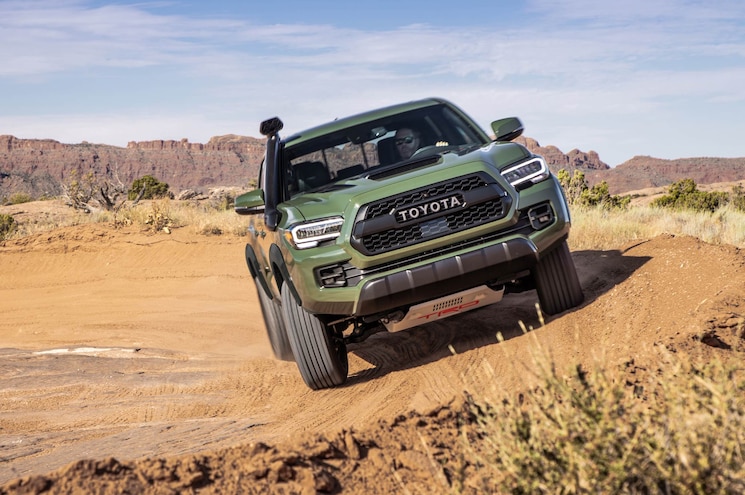 View Photo Gallery | 15 Photos
Photo 3/15   |   2020 Toyota Tacoma Trd Pro Army Green Front Quarter 02
Jumping from the Tacoma to the 4Runner, we were greeted with a familiar and chunky interior that's clearly designed for rugged operation. Like the Tacoma, the 4Runner's cabin is identified more by its hard-wearing plastics than sumptuous fitments, but that's wholly appropriate for an off-road-optimized midsize SUV. It's hard to deny the 4Runner is a more pleasant place to spend time than the Taco, offering more headroom, seat support, and adjustability—since these trucks share so much, why is one so much comfier than the other?
Also working in the 4Runner's favor is its aged but grunty 4.0L V-6, which boasts more torque (278 lb-ft) at a lower rpm (4,400) than the Tacoma's direct- and port-injected 3.5L V-6 (265 lb-ft at 4,600 rpm). Surprisingly, the 4Runner's antique five-speed auto seems to handle that torque better than the Tacoma's ostensibly newer six-speed. The Taco never stops upshifting, making that revvy torque harder to access, while the 4Runner always seems to be in the right gear. Of course, you can order the Tacoma with a manual transmission, making it even more playful than the auto-only 4Runner. Decisions, decisions 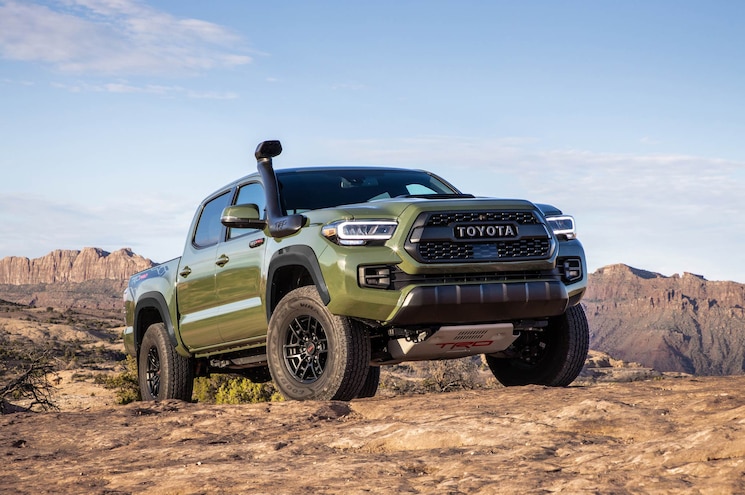 View Photo Gallery | 15 Photos
Photo 4/15   |   2020 Toyota Tacoma Trd Pro Army Green Front Quarter 01
Beyond that, it was 4Runner business as usual—flex-friendly suspension tuning that works wonders off-road and offers a smooth-if-floaty ride on road. However, the 4Runner lacks the Tacoma's somewhat useful trail cameras, meaning you're on your own unless you've got friends to spot you—they've got our condolences if it's muddy out.
Hooray, Ouray!
Day Two in these capable machines had us following the Rimrocker Trail, which winds its way through variable dirt and paved roads from Moab to Montrose, Colorado. Although the trail riding on this day was far less technical, it nevertheless offered us more insights into Toyota's most off-roadable vehicles.
Our priority this day was the Tacoma. As stated before, previous versions of the Fox suspension have left the TRD Pro feeling bouncy and uncontrolled in rapid, off-road driving. We won't bury the lede—the retuned suspension is far improved in this regard. Blasting over cattle guards left the truck feeling stable and composed, whereas before the rear wheels might wander around with little in the way of control. Well done, TRD. We like driving this truck fast again. 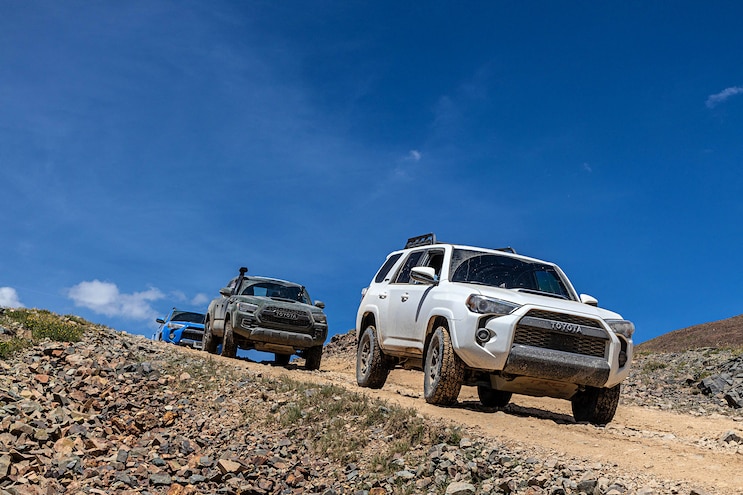 View Photo Gallery | 15 Photos
Photo 5/15   |   Off Road 2020 Toyota Tacoma And 4Runner TRD Pro 009
The 4Runner was very much the same, with the aforementioned 4.0L never letting us down. In quick driving, the suspension absorbed bumps well, although it's here that the truck's aging, somewhat wiggly bones make their presence known. There's a fair amount of steering column shake, betraying a platform that needs a daily dose of the little blue pill.
Both 4Runner and Tacoma offer TSS-P as standard, which bundles automated emergency braking, radar-based adaptive cruise control, and other collision-avoidance technologies in one easy-to-use package. On the stretch of two-lane highway from Montrose to Ouray, TSS-P allowed us to set and forget the cruise control, easing fatigue. Unlike some systems, the Toyotas' adaptive cruise automatically disengages below 20 mph or so, meaning driver attention is still vital—we say that's a good thing.
Also new for the midsize off-roaders is standard Apple CarPlay, Android Auto, and Amazon Alexa, making the vehicles much easier to live with on a daily basis. Toyota's embedded infotainment package leaves a lot to be desired, but iPhone users can now circumvent the system altogether.
The Route and the Trucks
Taken in sum, our route from Moab to Montrose and from Montrose to Ouray proved these trucks earn their reputation as solid off-roaders. Those who relegate them to mall-crawl duty are missing out on what makes the 4Runner and Tacoma so good. Yes, their age is on full display thanks to plasticky interiors and jiggling platforms, but both the pickup and its SUV sibling are undeniably capable factory off-roaders in TRD Pro trim. And it also must be said that the 4Runner's old-school feel and the Tacoma's playful demeanor are what make them so charming and fun to drive. With a subtle but palpable slate of improvements for 2020, the 4Runner TRD Pro and Tacoma TRD Pro are better now than ever. 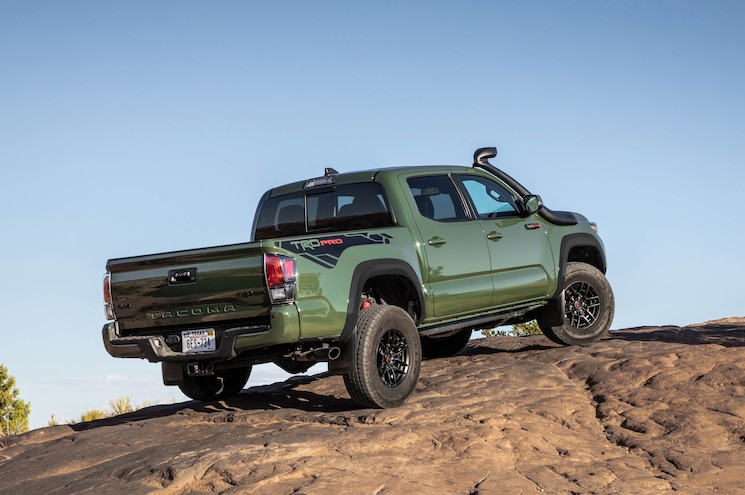 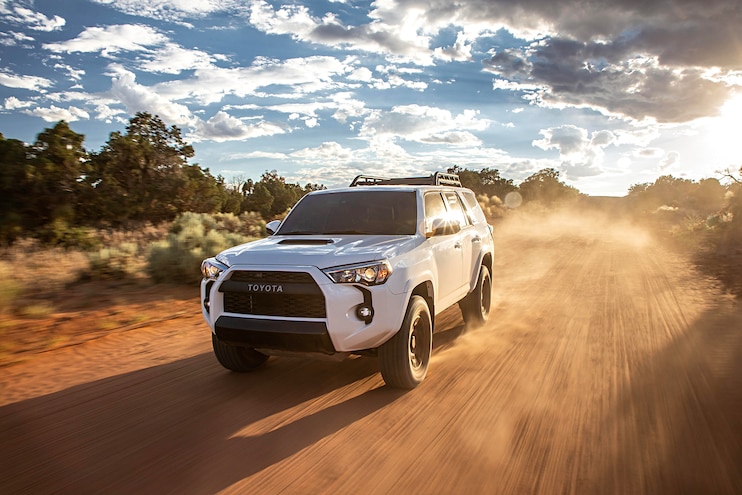