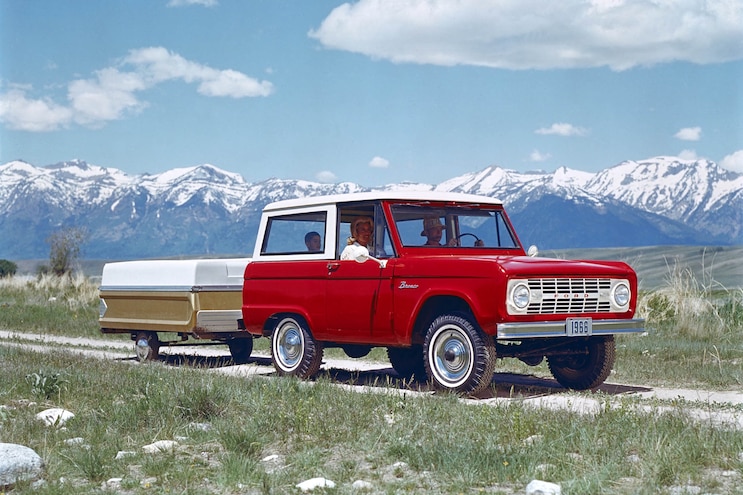 There's so much more to the Ford Bronco than a brief stint as O.J. Simpson's getaway vehicle. Yes, we might as well get that connection out of the way as quickly as possible, since we have other horses to ride. And let's keep the equine theme going a little longer, since if there was an equivalent to the Mustang in the sport-utility world, the Bronco would be an obvious contender.

That's not entirely coincidental. The Bronco was also made by Ford in the mid-'60s, at a time when car companies were going through a phase of giving vehicles animal-related names (Thunderbird, Falcon, and Stingray, for example). Also, motor industry titan Lee Iacocca and Donald N. Frey were responsible for both vehicles, even though they were markedly different machines. 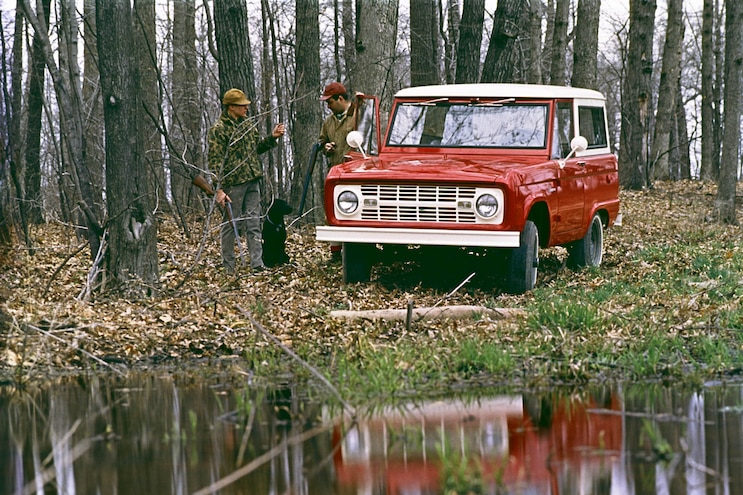 It was the Jeep CJ that was on the minds of Iacocca and Frey when they were developing the -ton Bronco. Like the Jeep, this model came with all-wheel drive (featuring a low-range transfer case) as standard, and generous ground clearance.

Unlike the Jeep, there was an initial choice of body styles: an open-topped roadster version with a fold-down windshield, a half-cab (kind of like a pickup with rear seats in the bed) model, plus a two-door wagon with a fixed metal roof. When the Bronco range went on sale in 1966, prices were $2,404, $2,480, and $2,625, respectively.

Each variant was powered by a 2.8L (170ci) inline-six making 105 hp and returning around 14 mpg. A 4.7L (289 cubes) V-8 soon became an alternative. The original transmission was a "three on the tree" manual, with a separate lever to engage the transfer case. Standard equipment included a front bench seat. All the seats were designed to be removed easily, bringing extra versatility for whatever weekend adventures Bronco owners might get up to. 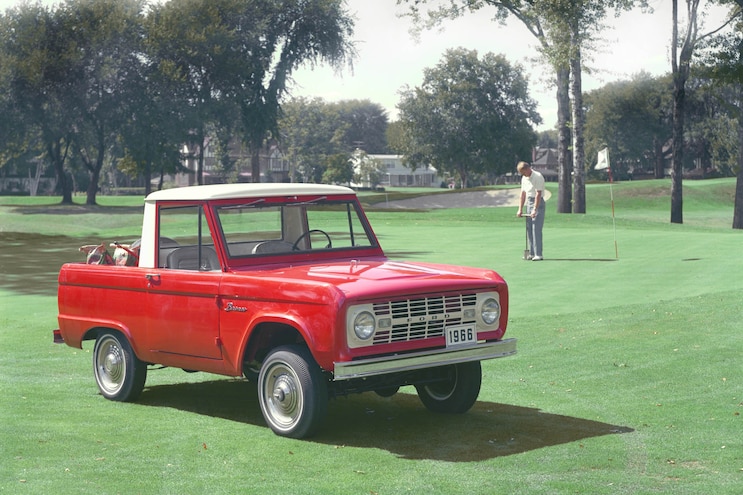 Chances are, long road trips weren't among those adventures. The Bronco was slow, struggling to reach freeway speeds. The weak drum brakes probably didn't inspire confidence, either. Its firm suspension, coupled with a short 92-inch wheelbase, was also better suited to off-roading than providing a lush ride quality. But it seems the motoring public's love of sport-utility vehicles is not just a recent thing.

At least the sales figures were galloping once the Bronco was out of the gate. It quickly became clear which Bronco model was the most popular. Production figures from 1966 showed a little more than 4,000 roadsters had been built, nearly 7,000 half-cabs, and almost 13,000 wagons.

There was also one kind of long trek where a Bronco was a common sight: the desert racing scene on Mexico's Baja Peninsula. The Bronco wasn't immediately successful, but famed builder Bill Stroppe prepared many Broncos over the years and won several titles. 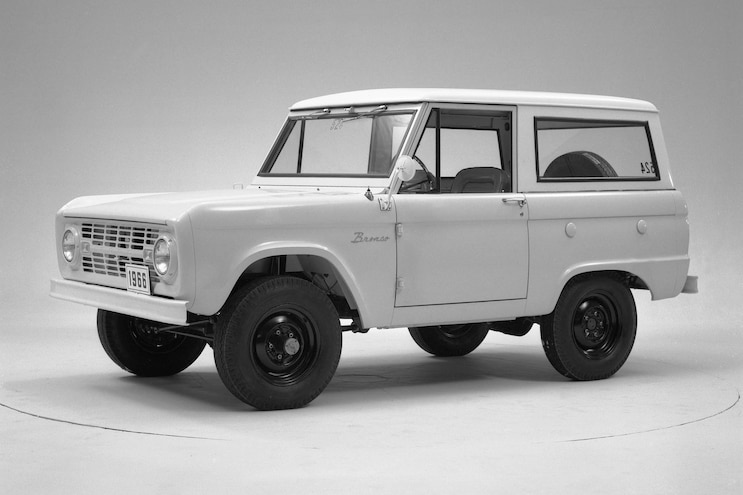 Ford commemorated these achievements with the 1974 Baja Bronco, a limited run of 650 units all bearing Stroppe-derived modifications, such as heavy-duty shock absorbers, uprated rear springs, a roll bar, and a 302ci (5.0L) V-8. These are now collectible, as are the relatively unloved (at the time) roadsters.

An automatic transmission option for versions with a V-8 arrived in 1973, along with power steering. At the same time, the wagon emerged as the sole Bronco model. The following year saw a spike in bumper sales but also the rising popularity of truck-based competitors like the Chevy Blazer. It wasn't until 1978 that a new Bronco, underpinned by the same platform as the Ford F100 truck, marked a fresh generation.

A generation that lasted only for two years. Despite the fact that the updated Bronco came with a V-8 as standard, a detachable hard top, and a pickup-like tailgate, buyer reaction was muted. The V-8's thirst had a lot to do with it.

Generation Three arrived in 1980. Smaller, lighter, offering V-8 or inline-six engines, and based on the Ford F-150, this Bronco ditched the previous solid front axle in favor of an independent suspension that made the ride bearable enough for everyday use.

The fourth and fifth generations were evolutions, but they were still three-door wagons, which is the reason Ford gives for the Bronco's eventual demise. People wanted more passenger doors, so Ford obliged with the Expedition. It wasn't the "O.J. effect" that killed the Bronco. In fact, sales enjoyed a short-lived resurgence during that time. 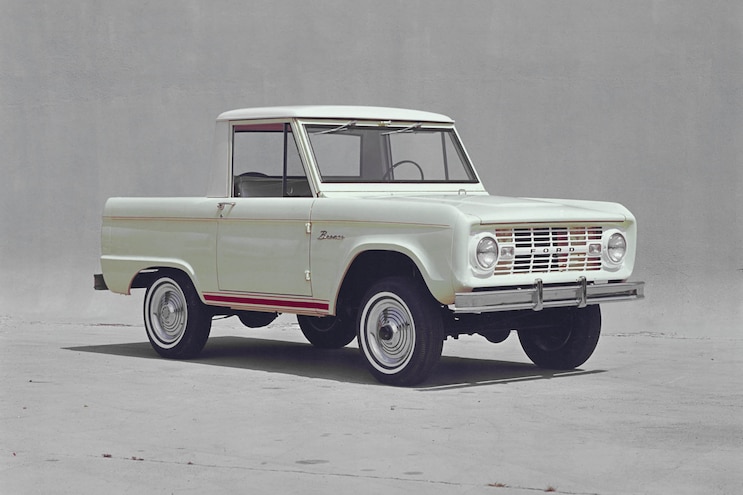 And just like that, we're back to one of the Bronco's most infamous owners. It does show, however, the pull the Bronco had on buyers. Simpson was a professional footballer who had translated his fame as an athlete into an acting career. He lived in a ritzy area of Los Angeles. So he was able to afford virtually anything he wanted—yet he bought a mainstream SUV, albeit one with a macho air about it.

Not the exact 1993 white Bronco, however, millions saw being chased by police on live TV. That one belonged to his friend, footballer Al Cowlings, who was driving at the time. These guys were so close, they purchased identical models. They put the "bro" into Bronco.

Cowlings eventually sold his for $75,000. Over the next 20 years or so, it was driven no more than 20 miles, spending the rest of its time in a corner of a Los Angeles parking garage. It's now an exhibit at the Alcatraz East Crime Museum in Tennessee. Simpson's Bronco—the one with traces of blood linked to Simpson and the two murder victims—was destroyed after the trial.

Ford now has a sixth-generation Bronco ready for release later in 2020. Like the Jeep Wrangler—progeny of the CJ—it will have two or four removable doors. It's based on a new generation of the Ranger midsize pickup truck, and there's even talk of a hybrid variant. Looks like it's time for the Bronco name to be rehabilitated.