Great Fun for Half a Century 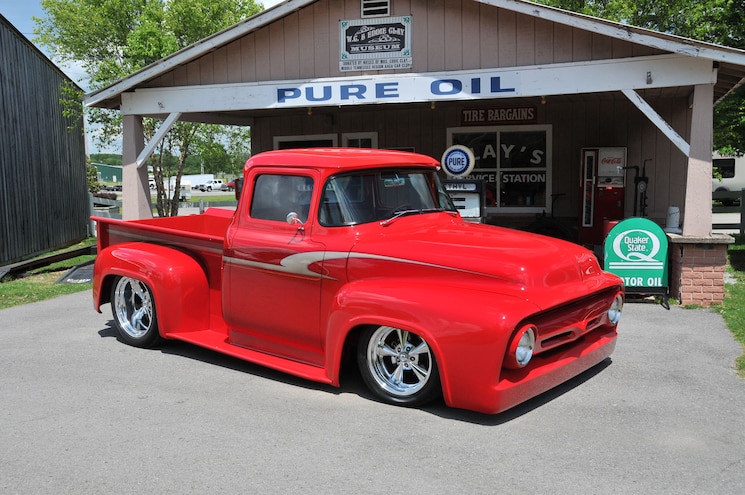 As a regular reader of this magazine, you know all about cool custom trucks but very few can say they have been enjoying one for the better part of a lifetime. Even fewer can say they have a truck that's been in the family for 50 years. Jack Sorich's connection to the hobby is clearly longer than most. From Louisville, Kentucky, he is a retired accountant and has been involved with custom rides since he was 16 years old. Originally from California, Jack found this 1956 F-100 on a used car lot 50 years ago and has been making regular enhancements ever since. The truck was all original way back then and the body was in good shape, but it took about a week to get it off the lot. The tires had to be pumped up, oil filled, plugs and distributor replaced, and a new battery added just to get the truck running. With a few minor upgrades, Jack drove the truck for more than 15 years, powered by the original 272ci cast-iron Ford Y-block engine. 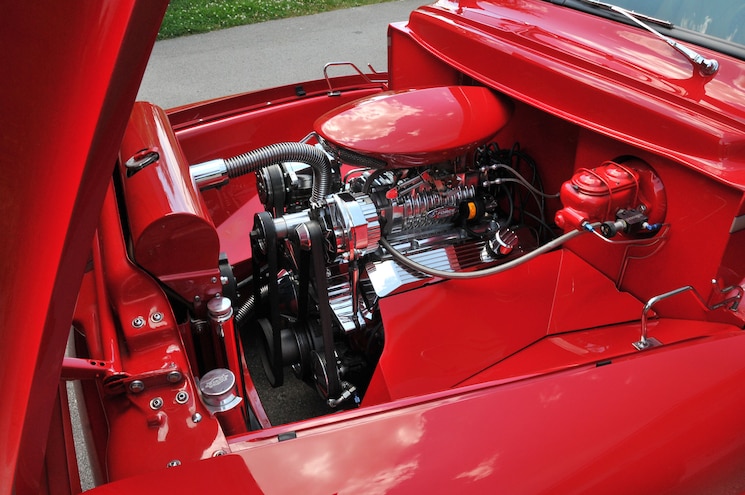 View Photo Gallery | 12 Photos
Photo 2/12   |   1956 Ford F100 Long Term Ownership Engine
The no-holds-barred customizing process began in earnest about a dozen years ago after attending the Los Angeles Roadster Show and meeting Justin Padfield of Scott's Rod and Custom in Oxnard, California. As it turned out, the shop was close to Jack's home and soon, the two men began working out the details of the build. Jack smiles saying, "I gave him a whole bunch of sheets on how I wanted it designed and he took it from there." Padfield was responsible for creating the initial changes and has participated in additional upgrades over the years. The process began by boxing the frame, fitting it with additional crossmembers, and powdercoating it. "It's almost as pretty on the bottom as it is on top," Jack told us. "If I didn't drive it as much as I do, it would be spotless." The front suspension is from Heidts with a Ride Tech four-link holding a Ford 9-inch fitted with 3.50 gears. Wilwood disc brakes provide modern stopping power while Firestone 'bags on all four corners control the truck's altitude. 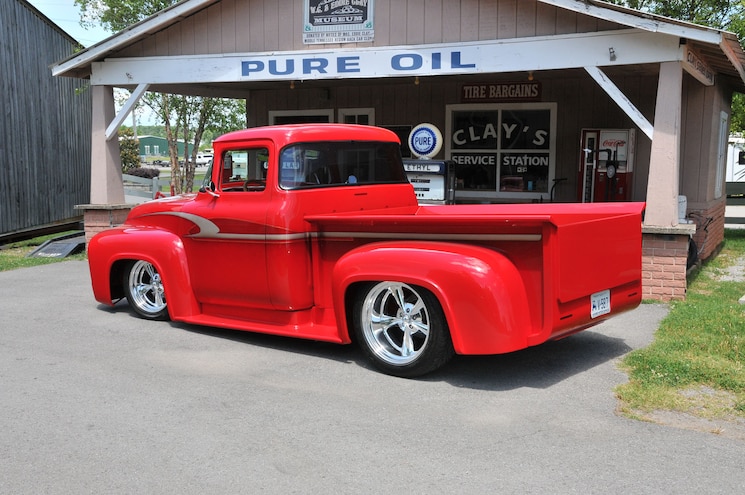 View Photo Gallery | 12 Photos
Photo 3/12   |   1956 Ford F100 Long Term Ownership Rear 3q
While the 'bags help to bring it down, the truck gets an even more distinctive profile thanks to a 2-inch top chop. The smoothing process continued with shaved door handles and custom running boards blended into the body. The grille was painted to match the exterior, and with the bumpers gone, the roll pan was fitted with tiny flush turn signals. The rear holds flush taillights, inset license plate, and tailgate molded permanently into the bed. A third brake light now sits in the rear window. Look closely at the tiny hole in the passenger-side front fender and you'll discover the power antenna. The bed uses oak planks with aluminum strips, protected with several coats of automotive clear. Colorado Custom wheels, 17x8s up front and 20x10s in the rear run Bridgestone rubber. The truck has had a few paintjobs over the years, but this latest version was accomplished by Grimes Garage in Lebanon Junction, Kentucky, using Lexus Radiant Red. The graphics are a combination of beige and Candy Burgundy with gold and green pinstriping, accomplished by Josh Culver from Louisville.
Moving inside, the original bench seat is long gone, replaced by beige leather Honda buckets handcrafted by Billy Scott. One of the focal points of the interior is the one-of-a-kind center console crafted by Jason Grimes. It begins at the dash, travels down along the floor, then curves gracefully upward to form an armrest between the seats, complete with cup holder. The ididit column holds a Billet Specialties wheel and the reworked dash was fitted with a Classic Instruments gauge package. Hot Rod Air keeps occupants cool with vents in the center console and dash while the Alpine stereo entertains with speakers in both doors. 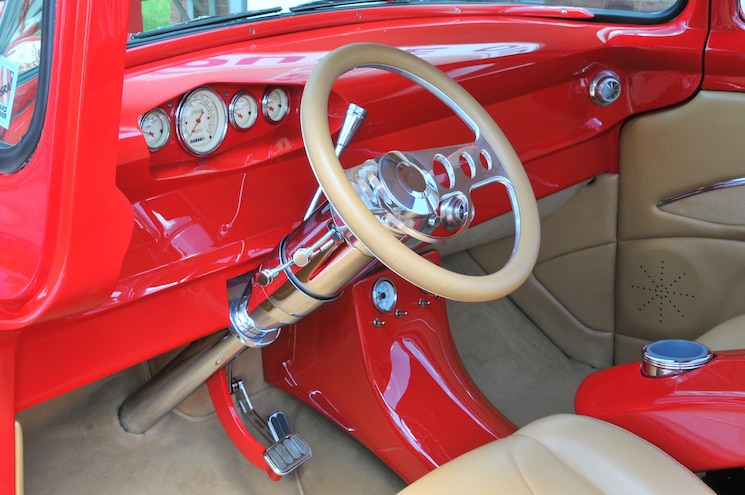 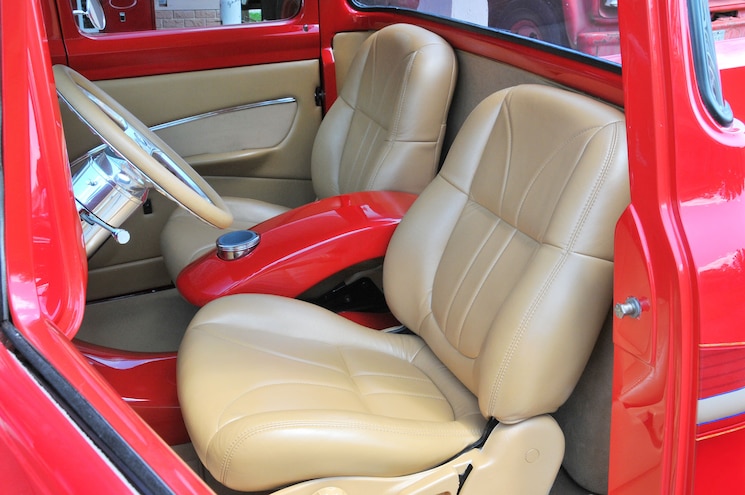 View Photo Gallery | 12 Photos
Photo 5/12   |   1956 Ford F100 Long Term Ownership Interior Seats
With inside and outside complete, all that was left was motive power. Although Jack gets a lot of kidding about a Chevy in a Ford, he doesn't complain about his 350 Chevy crate motor and turbo 350 transmission. The combo has performed flawlessly for several years, racking up more than 60,000 trouble-free miles. For a little extra high-performance rebelliousness—and maybe to catch some Ford-powered F-100s off guard—Jack added an Edelbrock E-Force blower by Magnuson after seeing it demonstrated at Scott's Rod shop. An Edelbrock Performer intake and four-barrel 750-cfm carb suck it in while ceramic coated Rewarder headers (hidden under the custom inner fender panels) blow it out. The two-inch stainless system uses a pair of Flowmaster mufflers to create an appropriately aggressive performance rumble. Dozens of elegant details dress up the engine room with accessories like the custom air cleaner, radiator shroud, and dual master cylinder painted to match the exterior. The tilt-forward hood makes it easy for spectators to appreciate the long list of upgrades. 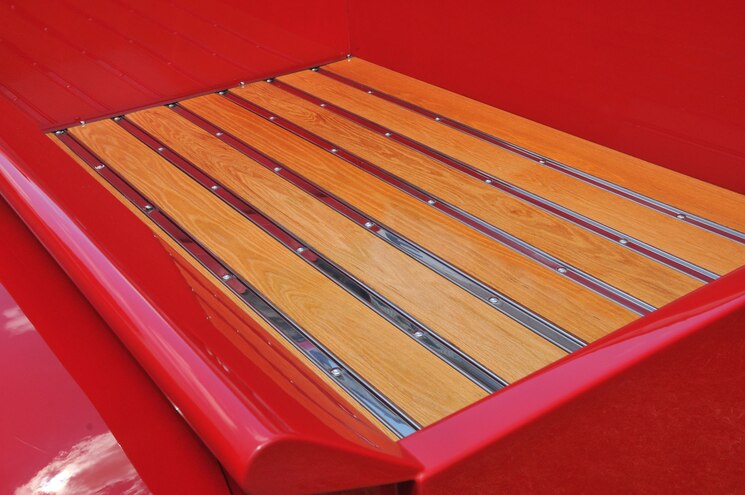