Easy for a First-Timer 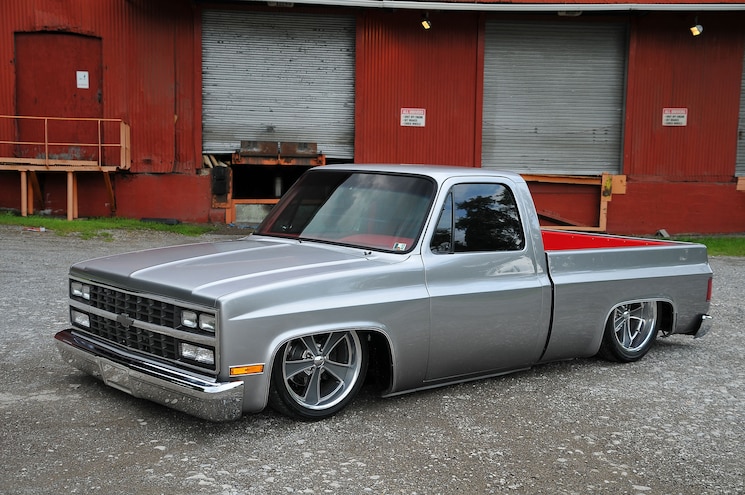 We all have that moment of epiphany or focused clarity. That one moment when you feel something and it guides you to happiness. It's possible to go through half of your life before hitting that moment when everything makes sense and you're brought back to your course. Warren Stiehler was a muscle car enthusiast but always felt like something was missing. "I loved the speed and feel of a fast car," Warren tells Truckin, "I just felt like something was missing though." His moment of clarity came when he accompanied his good friend Fred to a show in Ohio. A full Saturday walking around looking at bagged trucks, Warren felt his moment. On the way home, he turned to his friend Fred and uttered one line that changed his life; "I'm building a bagged truck!"
Of course, finding a truck to build becomes one of the hardest and most timely tasks for any builder. The very next day, Warren found an '87 GMC R10 pickup about two hours from his house. "The GMC was basically a body with an engine sitting in it," Warren adds, "Even my dad told me this was going to be a difficult project." Difficult wasn't something that would deter Warren, so the truck was loaded on a flatbed and brought home for the start of "The Breeze." 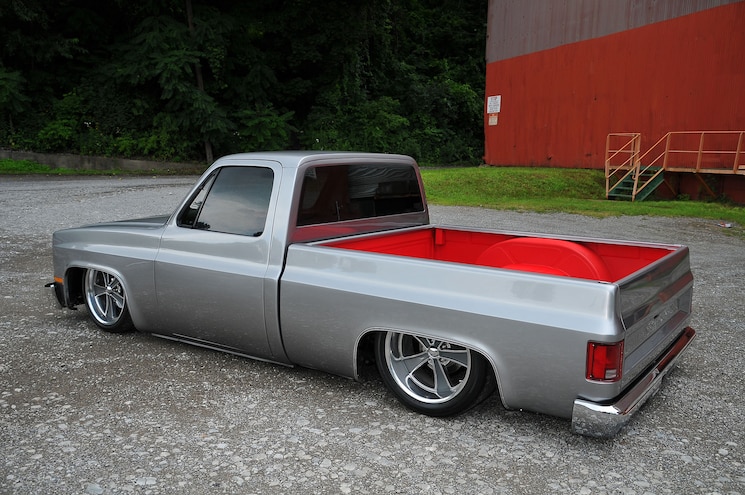 View Photo Gallery | 15 Photos
Photo 2/15   |   1987 Gmc R10 The Breeze Rear 3q
Although Warren and his father are no stranger to projects, this was quite the mission but the doubters and close friends that oftentimes questioned the finality of the build would be a constant motivator to the Stiehler's. The R10 had no interior at all, no wiring or anything, simply just a rolling body. Immediately the front clip and bed were removed and Boris at Street Machinery ordered a Ridetech four-link for the GMC.
The next step was adding a classic feel to the exterior by bringing the stripped body to his cousin Erich Myers at Erich Myers Automotive. The handles were previously shaved on the body, but the Stiehler's shaved the roof driprails, welded the holes and body-worked them. A handful of dents were repaired and Erich sprayed a PPG Porsche GT Silver in about a week. Now that everything was coming together flawlessly, Warren wanted to try something he was very unfamiliar with, a full air-ride. 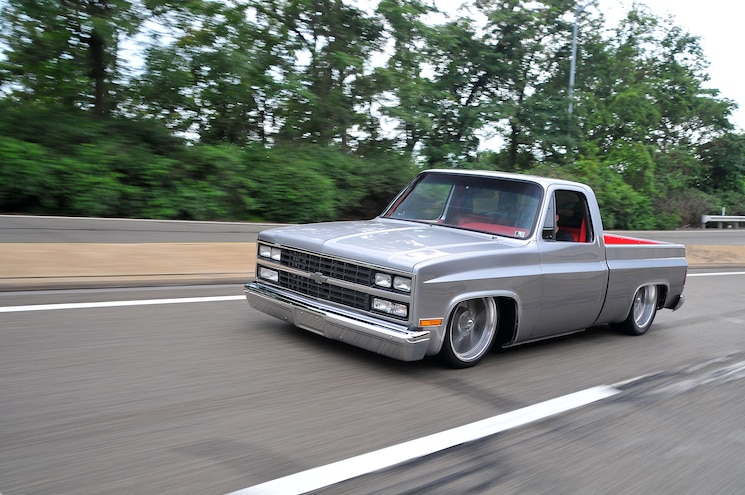 View Photo Gallery | 15 Photos
Photo 3/15   |   1987 Gmc R10 The Breeze Drive
Warren's friends were no stranger to air management and his friends Fred, Josh and Travis came over to Warren's place on a Saturday morning and spent the entire day plumbing the airlines, wiring the compressors and routing the airlines. Along the way, his friends were teaching Warren how to install and fix any issues that may arise. Warren mounted the compressors and tanks himself finishing the GMC adjustable suspension.
Although the engine was solid and working, it wasn't wired up to the pickup. Warren's father got right to work over the next few months connecting all the necessities to fire it up using a custom harness from Fuel Injection Specialties. The first time the LS1 fired up, the entire build came roaring to life and added that final touch to get the GMC complete. With only a few things left on the list to complete the truck, Warren and his friend Leroy cut a huge whole in the bed and then raised the floor. Leroy went to town welding everything together. His friend, Travis, had the bed tinted in Raptor Red for a little pop to the silver. 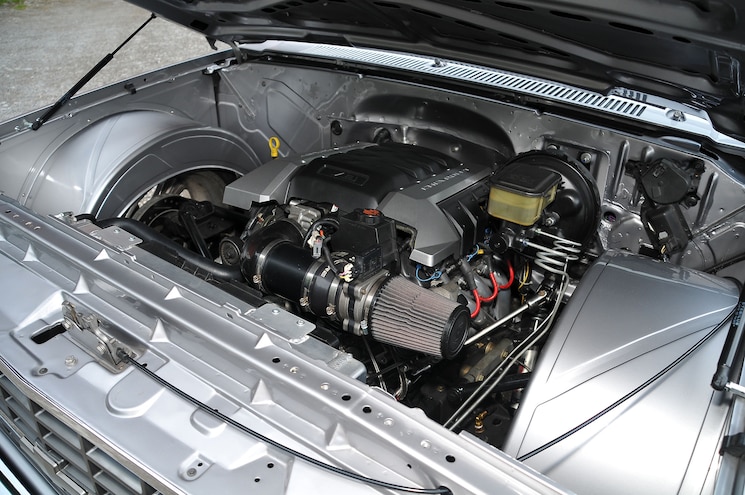 View Photo Gallery | 15 Photos
Photo 4/15   |   1987 Gmc R10 The Breeze Engine
Warren came back to his cousin Erich to match the interior to the bed using a Crimson Red paint. The stock seat, lower door panel trim and center console were brought to Josh and Doug at Trick Labs in Butler, Pennsylvania. They removed a few inches from the padding for a lower seating position for Warren. The sunvisors were also wrapped in Crimson Red to match. Warren used his own talents and added a custom Kicker stereo unit in the dash alongside the custom powdercoated steering wheel. The final touch was the front grille and radiator support being swapped to a '90s Blazer/Suburban model for Warren's preference. 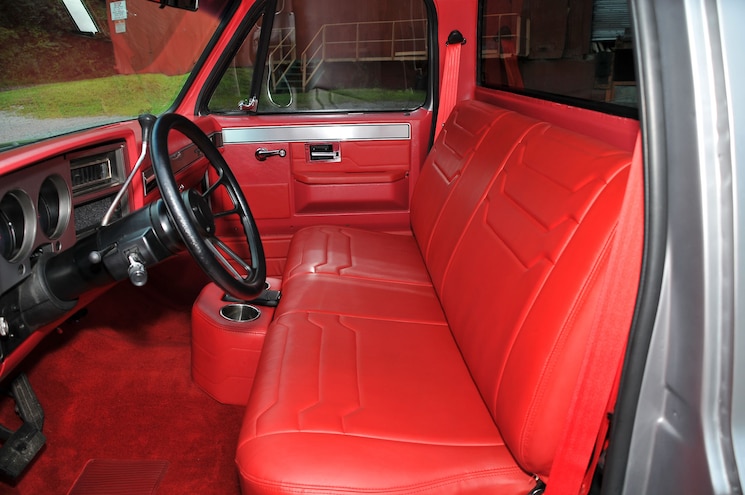 View Photo Gallery | 15 Photos
Photo 5/15   |   1987 Gmc R10 The Breeze Interior
Warren spends a lot of time looking at vehicles as he has been a parts associate for Chrysler, Jeep, Dodge, Toyota, Volkswagen and Mitsubishi for the past twenty-one years. "It takes a certain level of dedication to be around vehicles all day and then come home and continue to build and customize vehicles." Warren adds. Although cars have been running through his veins, the initial moment of seeing a show filled with custom bagged trucks turned his direction and led him to something that has given him more happiness and reward than anything with four wheels has ever given him before. When asked how hard it was to build his custom GMC R10, he replies, "It was a Breeze!" 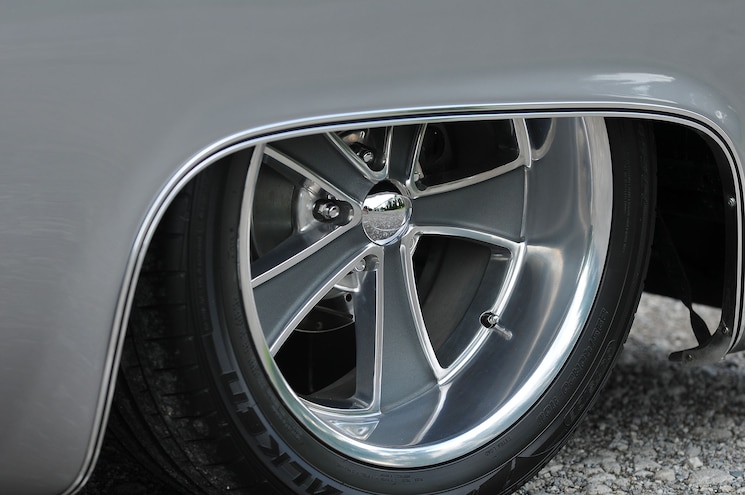