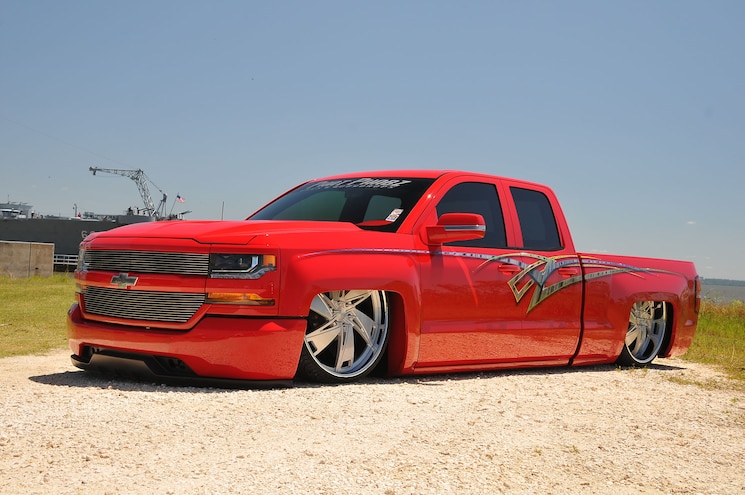 Most people make about four to five vehicle trade-ins in their lifetime, but Rickey May of Jacksonville, Florida, had his fourth trade within a year. "I just couldn't find something I knew I would be happy with," Rickey tells Truckin, "I actually went through fifteen different trade-ins in a two-year period.
Originally finding the culture intriguing by way of the lowrider world, Rickey ventured into the truck scene in 1997. Nineteen years later and fifteen trucks later, Rickey settled on the last trade he plans on when he walked into a Chevrolet dealership in Daytona Beach, Florida. In admiration of Chevy's new design of the 2016 model, he traded his 2015 Ford F-150 for a 2016 Chevy Silverado. He knew immediately when he started looking around at other new Silverados that there would be more potential for this make and model. One of the more famous builds he followed was Vanilla Ice, a '15 owned by Sean Randall and built by Jake McKiddie at Phat Phabz. Rickey knew what he had to do next to make his truck unique and stand out in a sea of Chevy's. 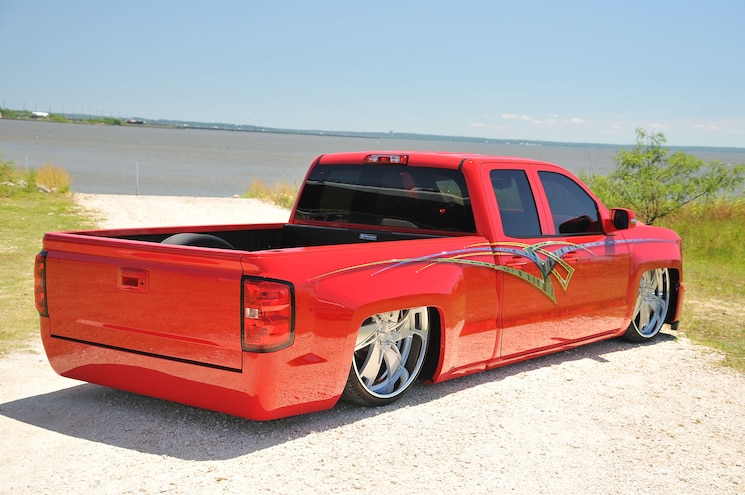 View Photo Gallery | 18 Photos
Photo 2/18   |   2016 Chevy Silverado The Final Trade Rear 3q
In order for Rickey to debut the new look at the Lonestar Throwdown in Texas, he needed to work fast. He contacted Jake and discussed what he planned. Rickey removed the stock interior and began building a custom cabin while the frame and body was sent to Oklahoma for Jake to begin the suspension process. The cab, bed and motor were pulled from the brand-new Silverado while Jake scrapped the stock suspension and frame. Along with the new fuel cell, a tubbed firewall and raised bed floor was added to accommodate the new suspension. While under the hood, so to speak, Jake added new inner wheelwells and replaced all the fuel lines with stainless braided steel.
Once the full AccuAir e-Level air management system was in place, Jake turned his attention to the motor. For some added power, Jake added a custom Magnaflow exhaust and retuned the motor. During the process of Phat Phabz creating a masterpiece, a major hail storm rolled through and put about forty dents to the hood and roof. It seemed like the perfect time to prepare for the bodywork. Rickey flew to Oklahoma to bring the Chevy back home and stopped at G&G Auto Salon where Glenn Strickland handled the body repair and added the Bob Grant roll pan, shaved the gas door, roof antenna and began the paint work. Glenn had free range as he designed the graphics and custom colors. 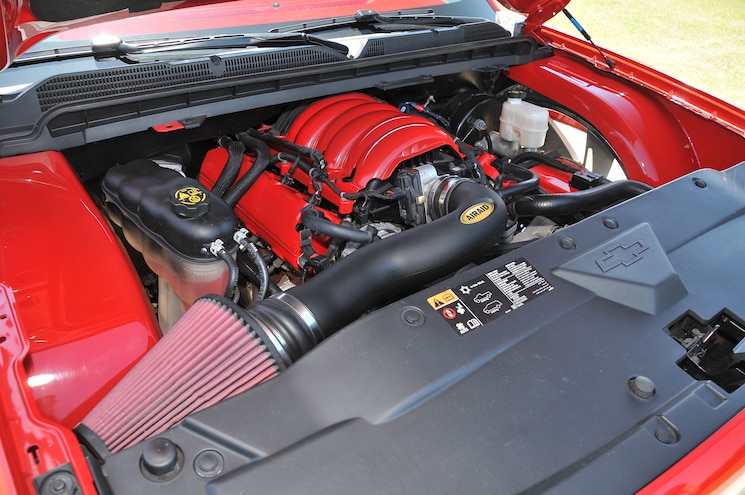 View Photo Gallery | 18 Photos
Photo 3/18   |   2016 Chevy Silverado The Final Trade Engine
Once the truck arrived back home, Rickey began cutting into the stock door panels and reshaping the bottom half for the Rockford Fosgate speakers. Rickey installed his handmade custom center console that runs from the front of the truck to the back seats and includes a billet cup holder. A Katzkin kit was added to replace the stock seats, and Glenn color-matched the fiberglass dashboard. Black suede was added to the headliner and door to make the bright red stand out. The last step was contacting MHT for a set of 28-inch two-piece Dub Hypas with Nitto tires. 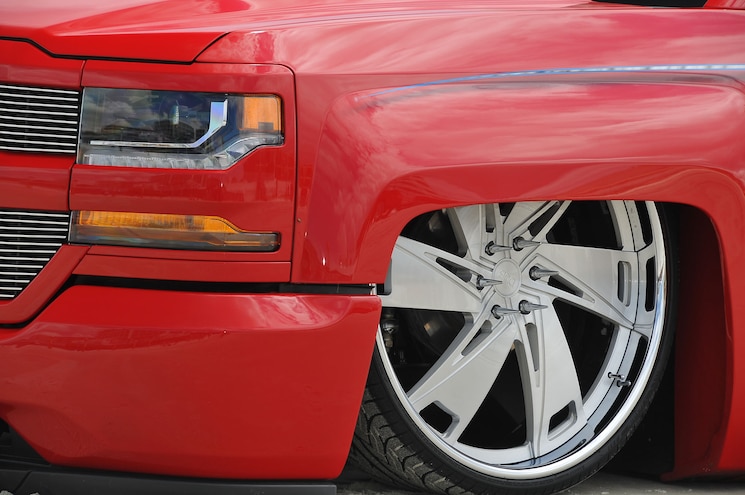 View Photo Gallery | 18 Photos
Photo 4/18   |   2016 Chevy Silverado The Final Trade Wheel
As a self-proclaimed "impatient man," Rickey is proud to say that the build was done in three months with the fast and flawless work of Jake McKiddie of Phat Phabz, Glenn Strickland of G&G Auto Salon and Troy Smith for the leather Katzkin seats. Rickey wants to thank his father, Rick, for all his support and the guidance to never give up no matter how badly you may want to. Special thanks go to his fianc e, Melissa, for all her understanding and patience. Their two children Columbia and Aria may not have been around for the fifteen trades, but they are sure enjoying daddy's Final Trade. 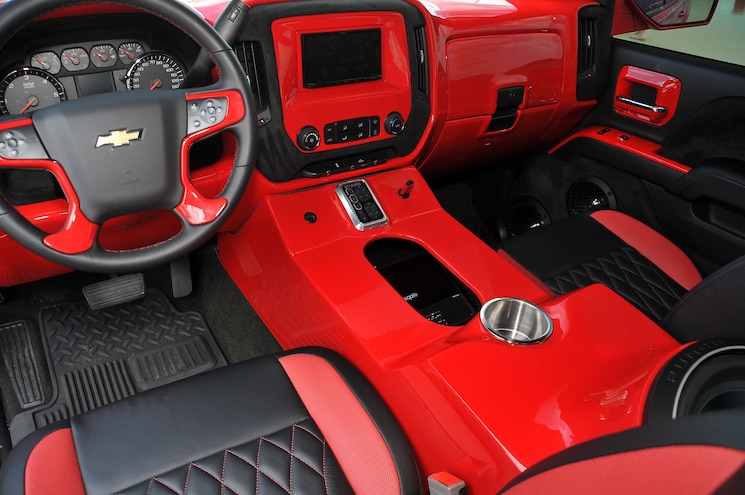 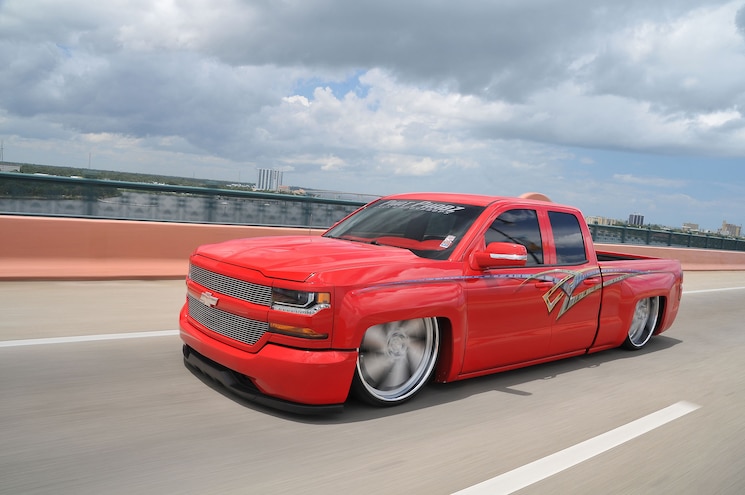