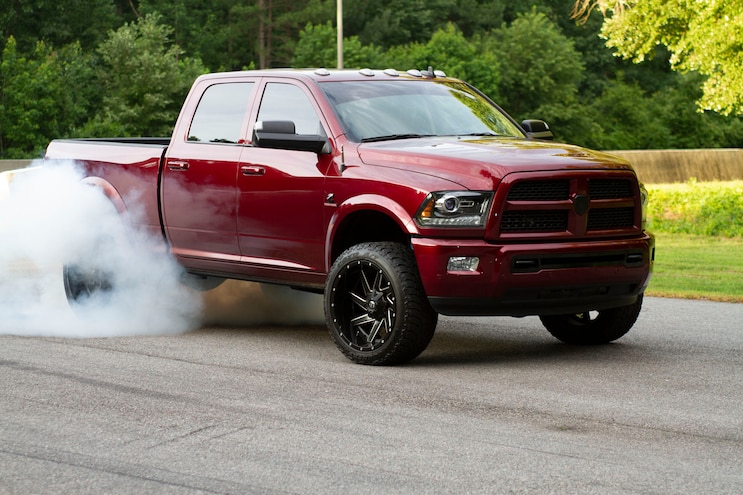 In the performance automotive world, the saying "built not bought" carries a lot of weight, especially when inexperienced people with deep pockets come into the scene with a truck they obviously know nothing about. Johnny Gilbert and his team at Stainless Diesel have built many trucks over the years, including his '19 Outlaw Diesel Super Series Hot Shot's Secret Pro Street-championship-winning Dodge Ram drag truck, so we're OK with giving him a pass when it comes to buying a truck that was already built. For Johnny, that rig is this beautiful '16 Ram 2500 originally owned and modified by James Warren of Rollin' Smoke Diesel in La Porte, Indiana.
RSD is one of Stainless Diesel's many dealers, and James worked closely with Johnny and his friends at White Knuckles Garage in Westville, Indiana, as well as several other performance-diesel-parts manufacturers, to build what many would consider the ultimate street/tow Ram. When it was time to move on to another project, James decided to sell the Ram—at the same time Johnny was looking for a late-model 6.7L Cummins-powered Ram to use as his daily driver and tow rig. As the saying goes, timing is everything. 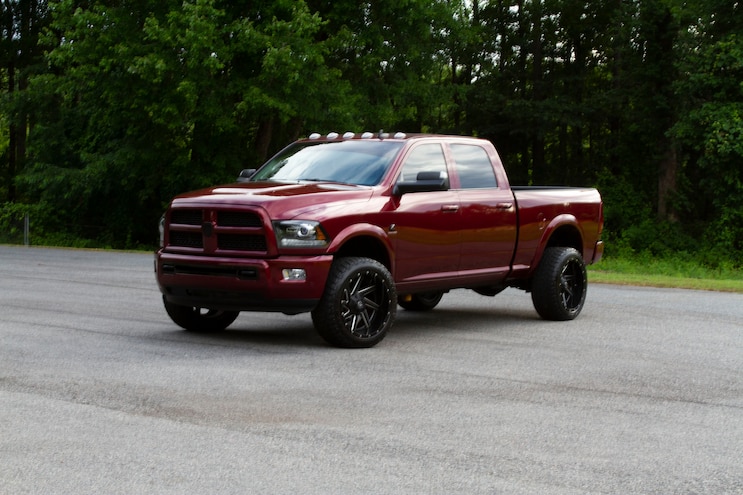 View Photo Gallery | 34 Photos
Photo 2/34   |   While Johnny Gilbert is used to blasting down the eighth-mile dragstrip in a little more than 5 seconds at around 150 mph, he moves just a little slower in the '16 Ram 2500 tow rig he uses to drag the race truck to Outlaw Diesel Super Series events around the country.
This particular '16 Ram 2500 is a great looking truck with bright paint and a plush Laramie interior that pretty much remains how it was when the truck left the factory. James did replace the Ram emblems in the grille and on the tailgate with black badges of his company, Rollin' Smoke Diesel, and he swapped the fender badges with black Cummins pieces for a more low-key look. Wanting the truck to have an imposing stance, he chose to wrap the wheels in 37-inch rubber and install a lift kit on the truck to fit the large rolling stock. 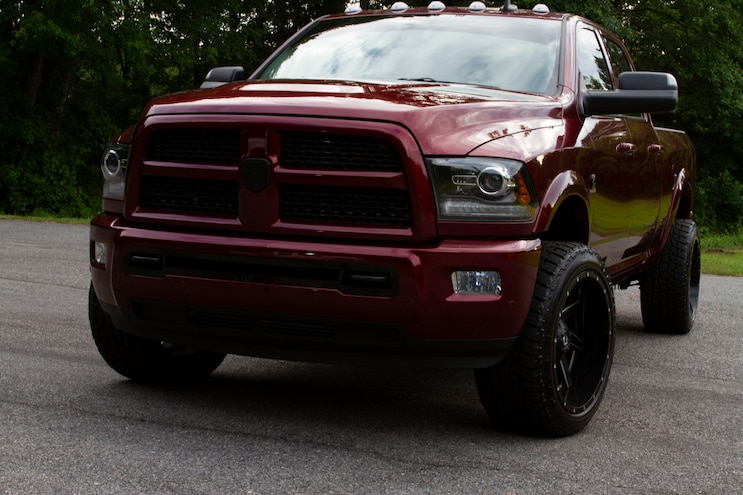 View Photo Gallery | 34 Photos
Photo 3/34   |   The color-matched bumper and grille combined with the black backing of the headlights make this Ram a slick-looking ride. 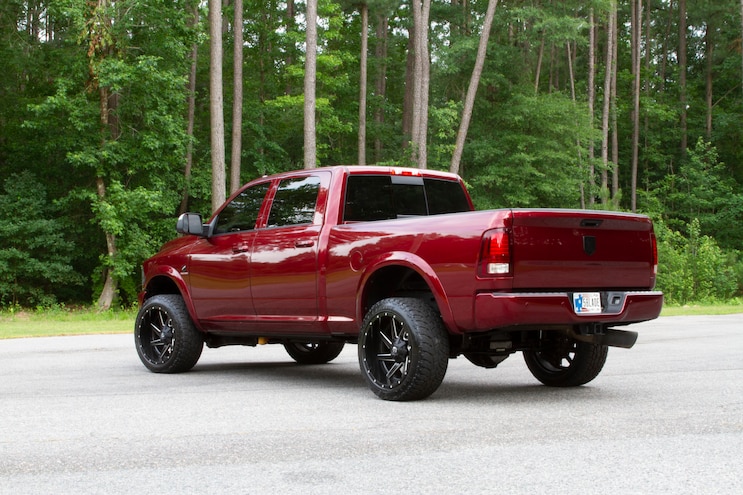 View Photo Gallery | 34 Photos
Photo 4/34   |   A color-matched rear bumper helps unify the clean look.
With the Ram's appearance to his liking, James worked with a who's who list of major players in the performance-diesel world to develop a 1,000hp-capable 6.7L Cummins I-6 engine. Wanting to ensure the rig was ready for any abuse he put it through, he opted to pull the engine out and give it a complete rebuild rather than just bolting parts on and tuning it.
The team at Diamond Engine and Machine in Monticello, Indiana, replaced the stock rods with a set of Wagler Competition Products forged pieces, and the pistons were treated to a custom top coating along with a diamond-like carbon coating on the skirts and wristpins. Then, the complete rotating assembly was balanced and the short-block was reassembled with a Hamilton Cams 188/220 camshaft and Trend pushrods. Diamond Engine and Machine also reworked the cylinder head, cutting it for 0.120 fire rings and installing new valvesprings with Fleece Performance Engineering valve bridges to eliminate deflection. New Mahle seals, rings, and bearings were used during the assembly, and an Industrial Injection Gorilla Girdle is employed with a set of ARP main studs to secure the bottom end of the short-block. 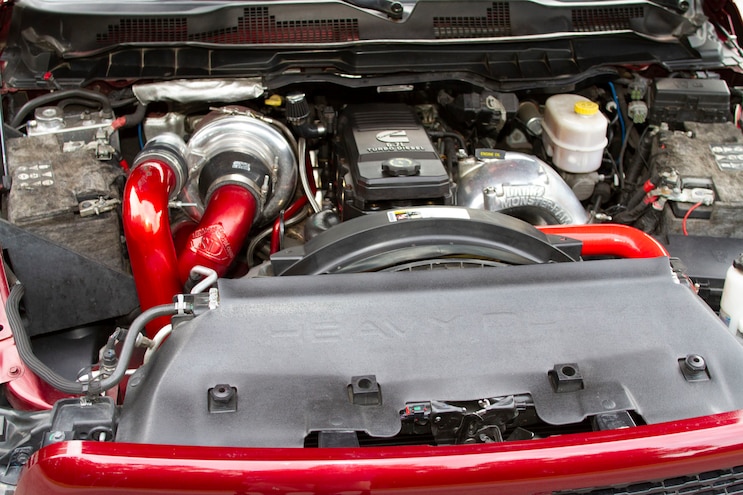 View Photo Gallery | 34 Photos
Photo 5/34   |   This isn't your average 6.7L Cummins I-6 powerplant; not only does it sport a Stainless Diesel Knuckle Sandwich 400/400 compound-turbocharger setup, it also has internal upgrades throughout, including rods, pistons, and a balanced rotating assembly that makes more than 1,000 hp.
The rebuilt head and short-block were then handed over to the team at White Knuckles Garage for final assembly using ARP studs to clamp the head securely to the block. WKG also dropped the engine back into the Ram once the assembly was complete. Of course, with a high-end engine and 1,000-plus-horsepower goals, the stock fuel system and turbocharger were not up to the task. On the fuel side, James turned to S&S Diesel Motorsport for a set of 250-percent-over injectors and a 14mm stroker CP3 injection pump to deliver plenty of fuel to the engine, with an assist from an AirDog II 4G lift pump and filter system. 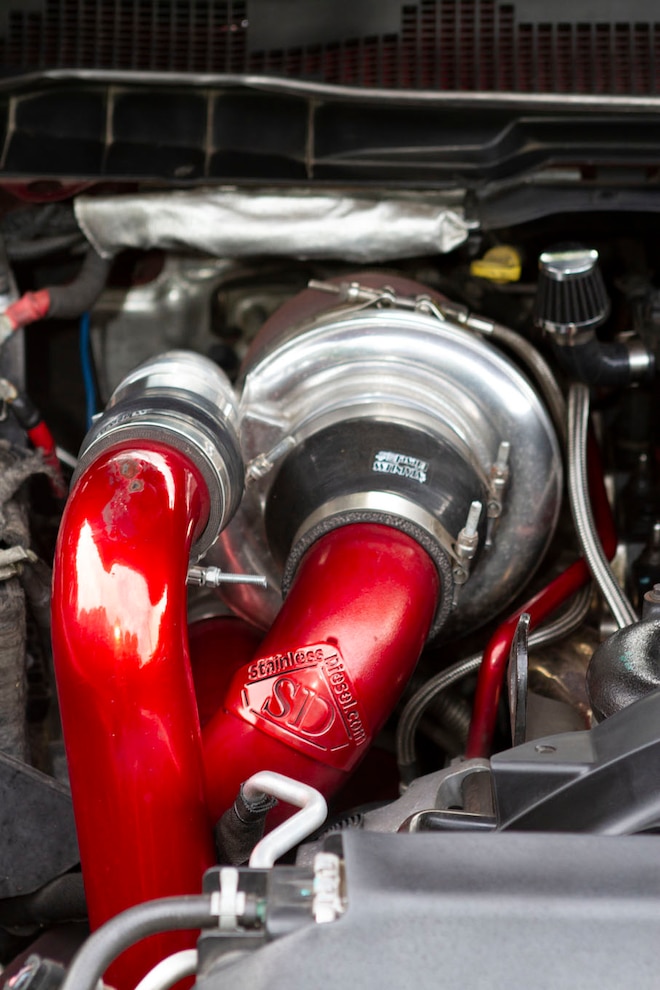 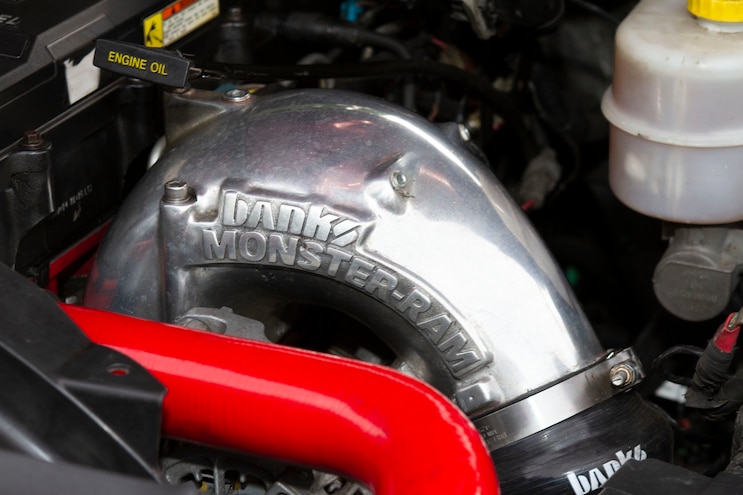 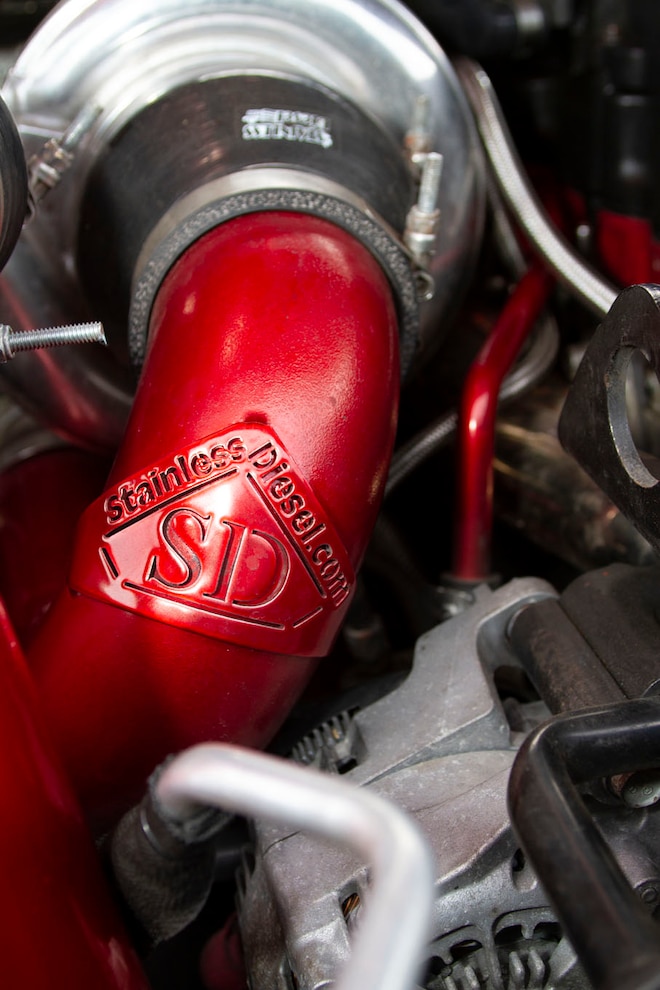 View Photo Gallery | 34 Photos
Photo 8/34   |   The Stainless Diesel piping kit is powdercoated to match the truck and the bold SD logo welded to the pipe.
For airflow, James turned to Johnny and his Stainless Diesel team for one of their Knuckle Sandwich 400/400 compound-turbo kits along with a Stainless Diesel stainless steel T-4 exhaust manifold. A Stainless Diesel 5 Blade Mafia BorgWarner S468/83/T-4 1.00 turbo is bolted directly to the exhaust manifold with a S480/96/T-6 1.32 'charger drawing air in from the atmosphere through a high-flow S&B Filters air filter with an Outerwears prefilter. Color-matched steel piping is used to link the turbos and channel boost through the intercooler to a Banks Power Monster Ram intake elbow on the driver side of the engine. 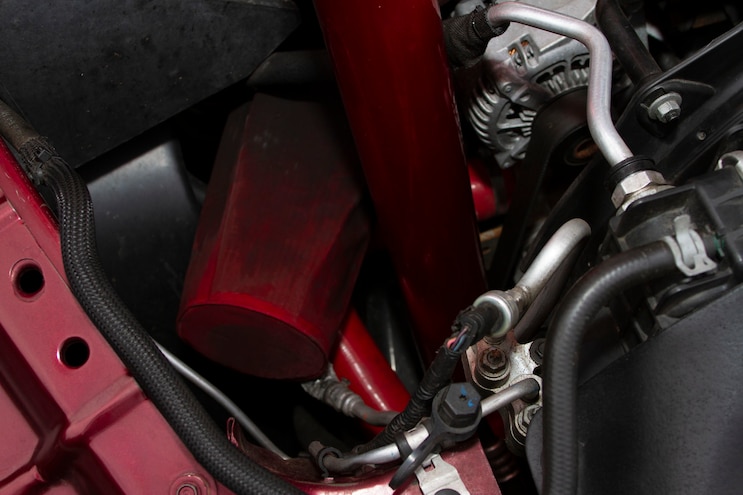 View Photo Gallery | 34 Photos
Photo 9/34   |   Since this truck is a driver not a show truck, a high-flow S&B Filters air filter element is used along with an Outerwears prefilter to prevent dirt, road debris, and moisture from entering the turbos.
ECM calibration is accomplished using EZ Lynk with tuning by Higher Power Performance. To improve throttle response, James installed a BD Diesel Performance throttle-sensitivity module. Both the BD and EZ Lynk switches are mounted in dash panels near the steering column to allow the driver easy access. On the dyno at Higher Power Performance, the Ram easily reached the 1,000hp mark.
The stock Ram 68RFE six-speed automatic transmission would never live behind the high-powered 6.7L Cummins engine, so James turned to the transmission experts at RevMax for one of their Signature Series 850 rebuilt units. The transmission is linked to the engine through a RevMax billet SFI-approved flexplate and Billet Stage 5 triple-disc torque converter. Power is channeled to the stock front and rear axles through the OEM transfer case and driveshafts. The axles were regeared with 4.56 gears from Nitro Gear by the crew at White Knuckles Garage. Since the transmission is rated at 850 hp and James wanted the truck to be able to handle anything, they decided to detune it some by swapping the injectors for a set of 100-percent-over S&S Motorsport squirters and opted for an S&S 12mm stroker CP3 injection pump. The fuel changes and tuning updates put the engine in the sweet spot of a little more than 800 hp, making the truck fun to drive while still being capable of towing anything Johnny hooks to it. 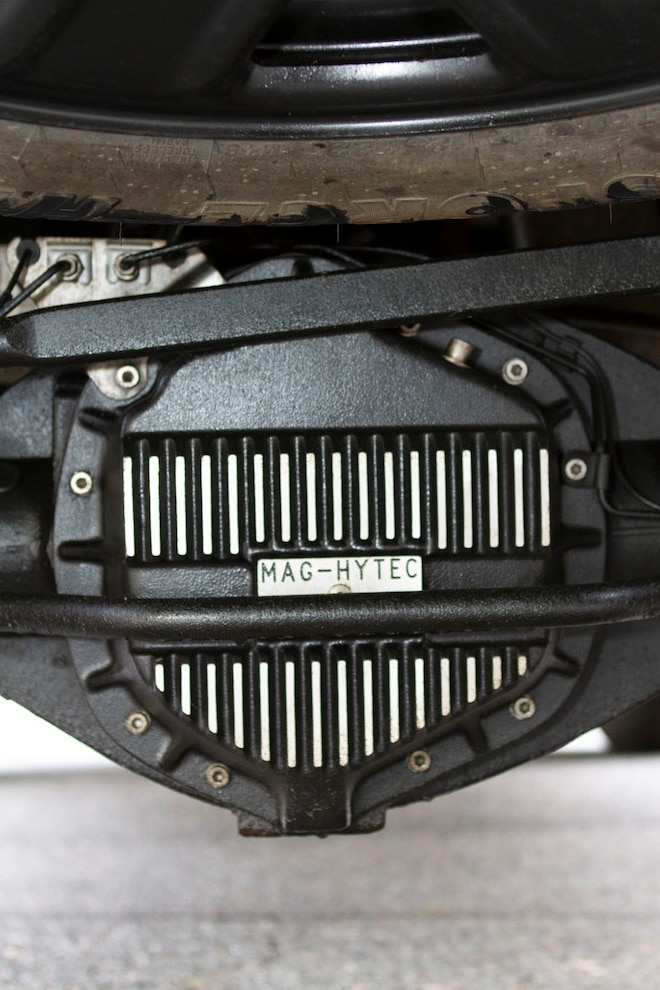 View Photo Gallery | 34 Photos
Photo 10/34   |   A Mag-Hytec differential cover is mounted on the AAM 11.5-inch rear axle to provide additional fluid capacity and keep gear-oil temperature down while towing.
One of the main reasons Johnny purchased the truck was to be able to tow the 40-foot enclosed trailer he uses to haul the Stainless Diesel drag truck, as well as the company's mobile pit equipment and tools needed for a weekend at the races. The 37-inch tires and huge lift James originally used obviously aren't ideal for towing. So Johnny and his team lowered the truck by installing a set of Ram 3500 cab-and-chassis front springs and cutting a full turnout of the stock rear springs after removing the lift kit components. He also replaced James' 37s with a set of 33x12.50R22 Toyo Open Country AT2 tires wrapped around 22x12 Fuel Renegade wheels. Bilstein shocks replace the original dampers (4600 Series front, 5100 Series rear). To help level the load when towing the heavy gooseneck trailer, the Stainless Diesel team also installed a set of Air LiftLoad Lifter 5000 airbags to keep the rear from sagging when under load. 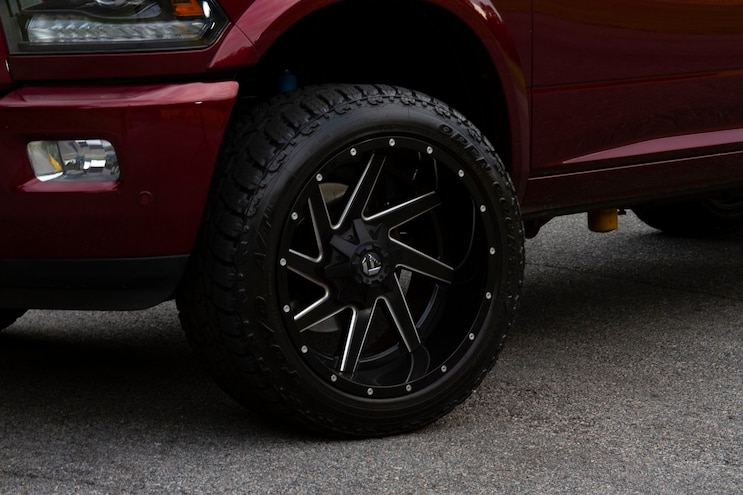 View Photo Gallery | 34 Photos
Photo 11/34   |   The Ram sports an aggressive set of black/machined 22x12 Fuel Renegade two-piece wheels wrapped in 33x12.50R22 Toyo Open Country AT2 tires for great looks and equally great handling when cruising the streets on a night out or towing to the next event. 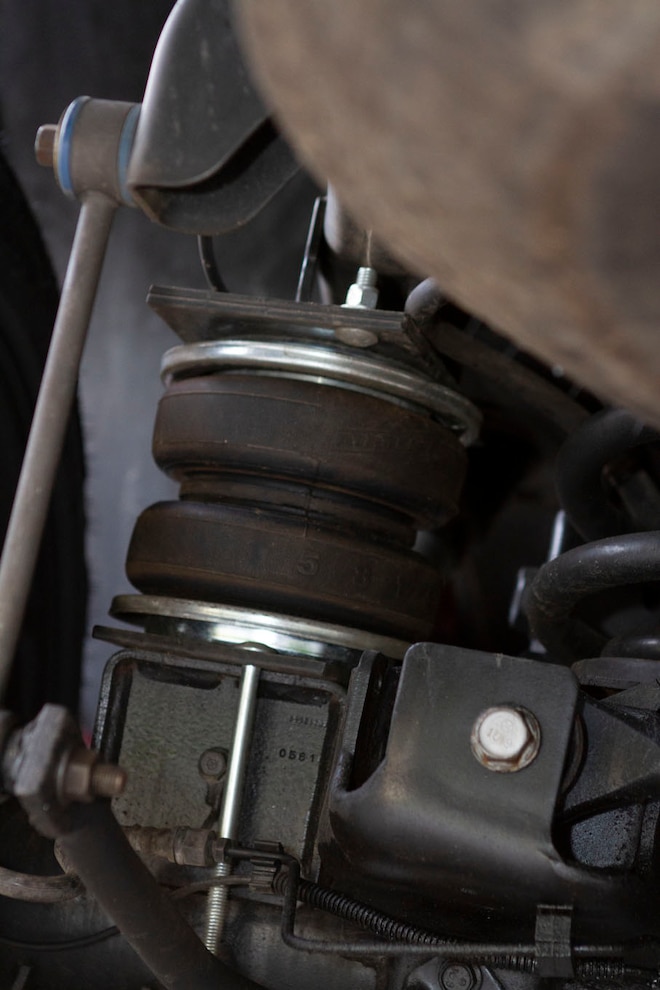 View Photo Gallery | 34 Photos
Photo 12/34   |   To assist in keeping the rear end of the truck from sagging under heavy loads, a pair of Air Lift LoadLifter 5000 airbags is used in addition to the stock rear coil springs, which are cut to lower the truck approximately 1.5 inches.
While Johnny may not have built the entire truck himself, his turbos have been on the rig throughout its existence. He continues to make it his own, thus far by reworking the suspension and changing tires to suit his needs. Whether it was built or bought, there is no denying Johnny Gilbert's 800hp daily driven tow rig is one special machine. 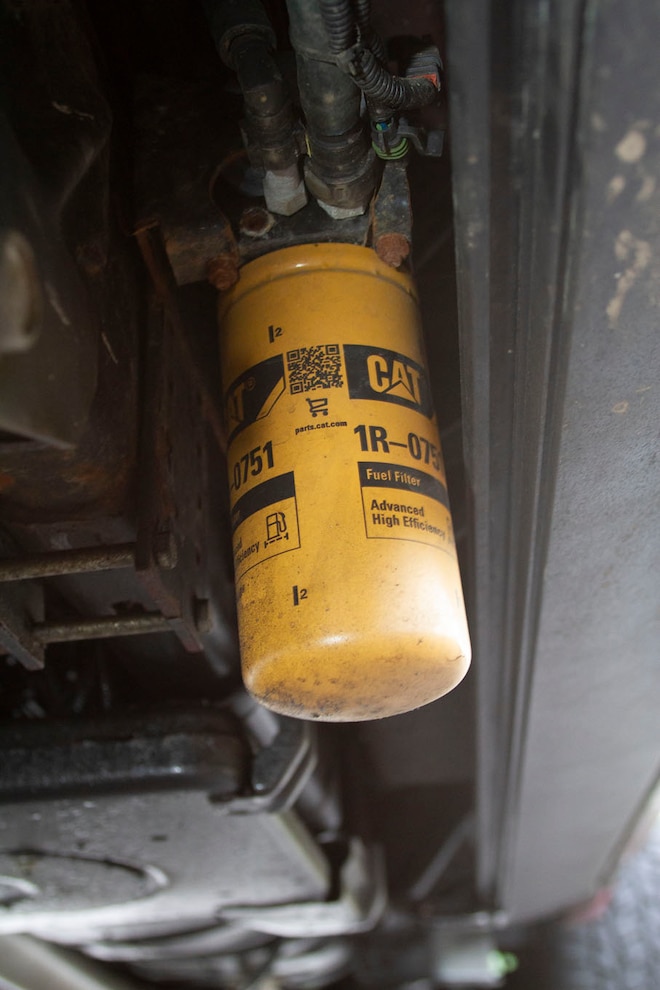 View Photo Gallery | 34 Photos
Photo 13/34   |   Peeking below the Ram, you can see the fuel filter and water separator from a PureFlow AirDog II 4G 165-gph lift pump and filter system. Clean fuel is fed from the tank to an S&S Motorsport high-pressure injection pump and fuel injectors. 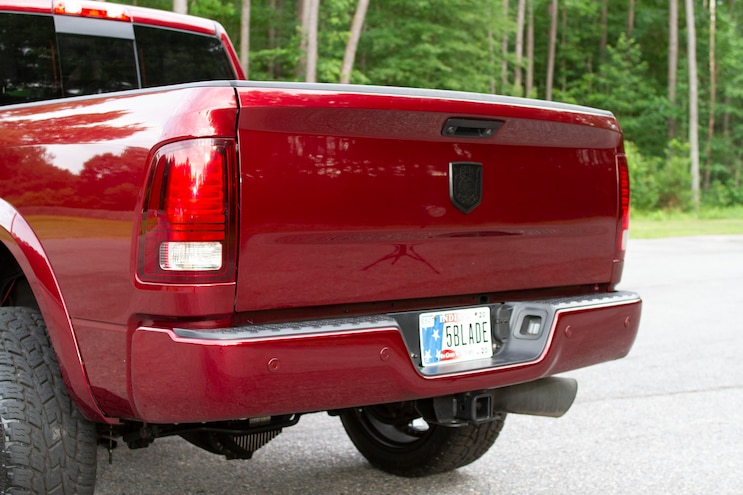 View Photo Gallery | 34 Photos
Photo 14/34   |   Looking at the truck from the rear, a black custom badge, Flo-Pro Performance Exhaust tailpipe, and Mag-Hytec differential cover are all that indicate there's a high-performance Cummins under the hood. 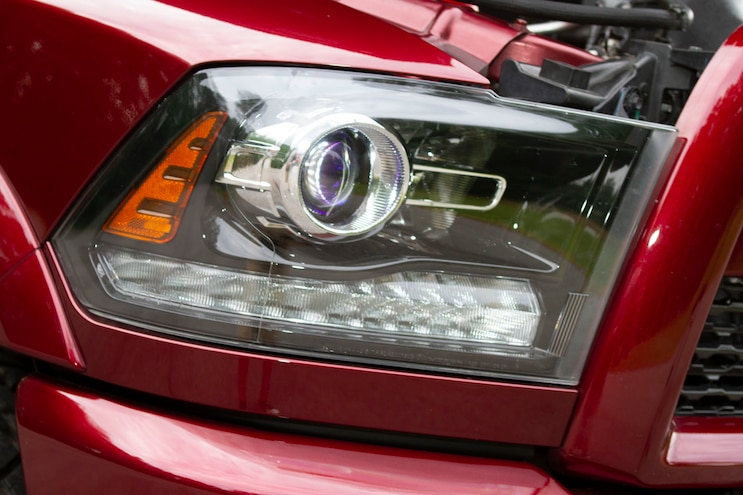 View Photo Gallery | 34 Photos
Photo 15/34   |   Despite the tint treatment, stock Ram HID headlights look great and light up the night without any drama. 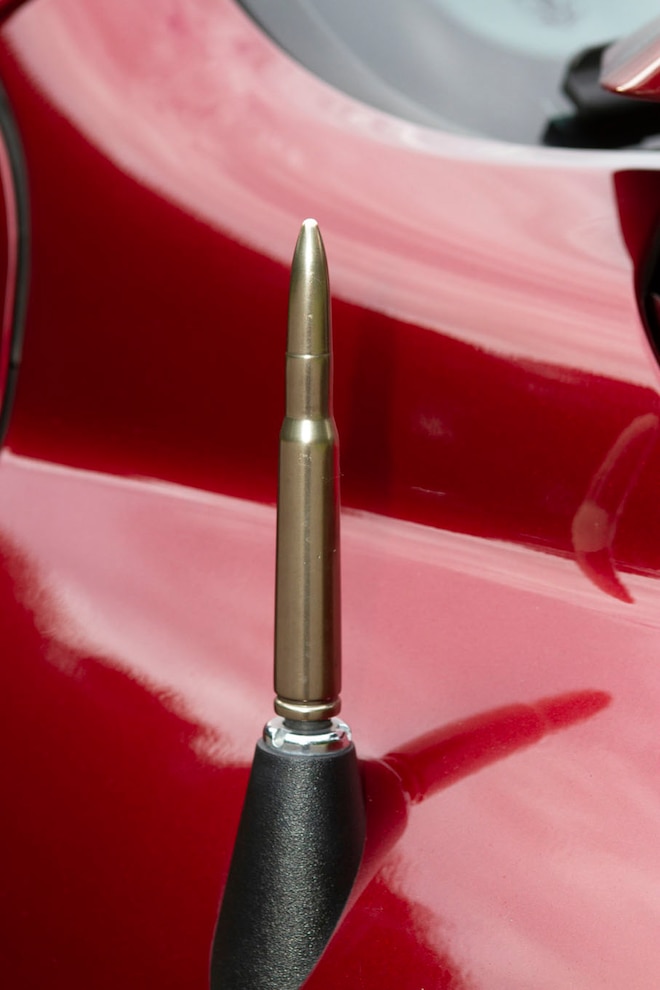 View Photo Gallery | 34 Photos
Photo 17/34   |   Blacked-out Cummins badges on the fenders give the truck a mean look while boldly stating that a monster diesel engine lurks beneath the hood. 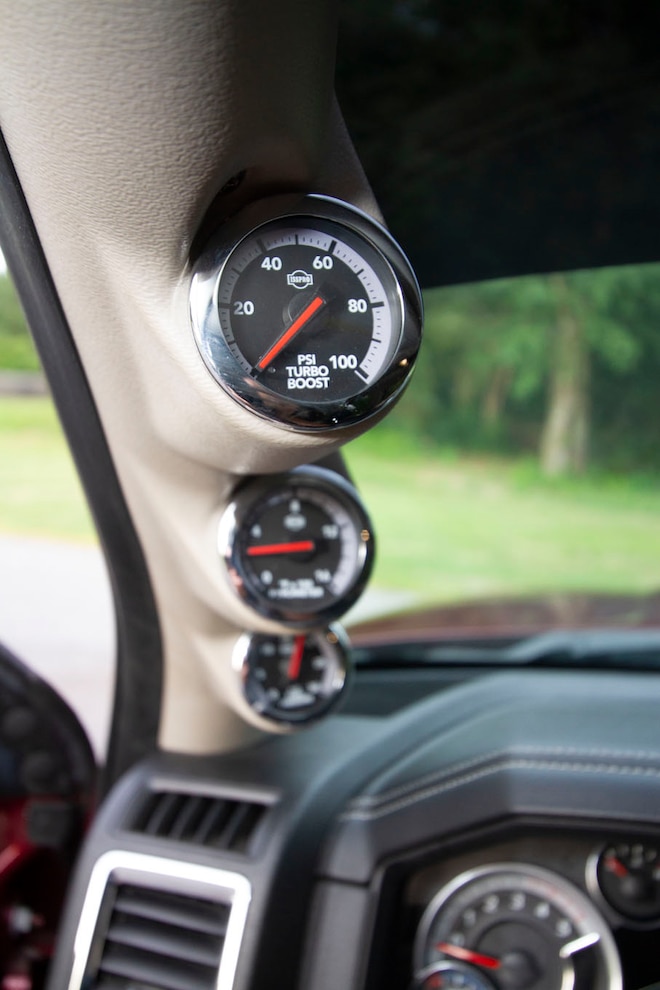 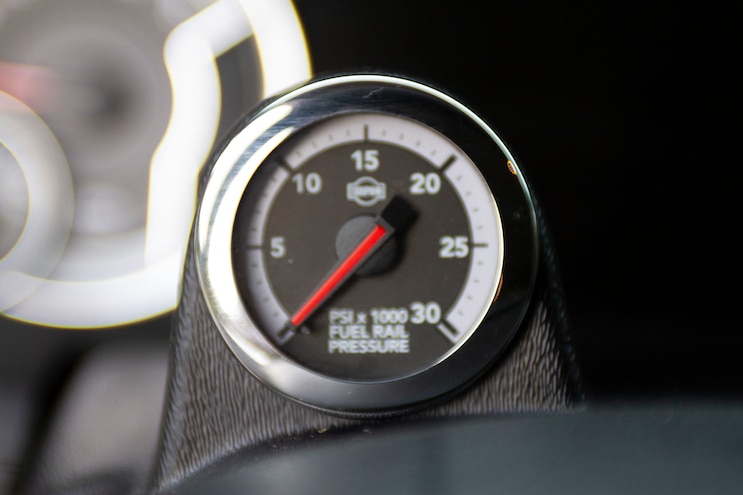 View Photo Gallery | 34 Photos
Photo 19/34   |   018 Johnny Gilbert 2016 Ram 2500 Interior Gauges 2
Johnny's Ram sports the plush Laramie interior in black with simulated metal and wood trim accents making it a comfortable place to enjoy many long hours on the road traveling to events, or a nice night on the town with the family when they are not racing. 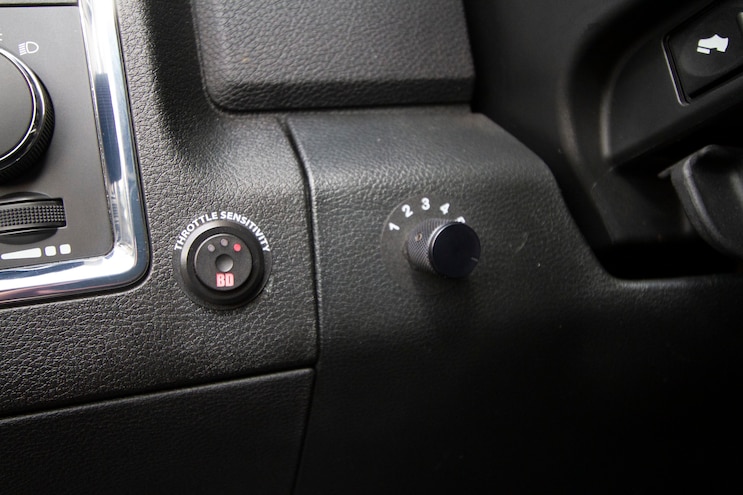 View Photo Gallery | 34 Photos
Photo 23/34   |   The controls for the BD Diesel Performance throttle-sensitivity module and EZ Lynk ECM tuning are located in dash panels near the steering wheel, giving Johnny easy access to make changes on the fly as needed. 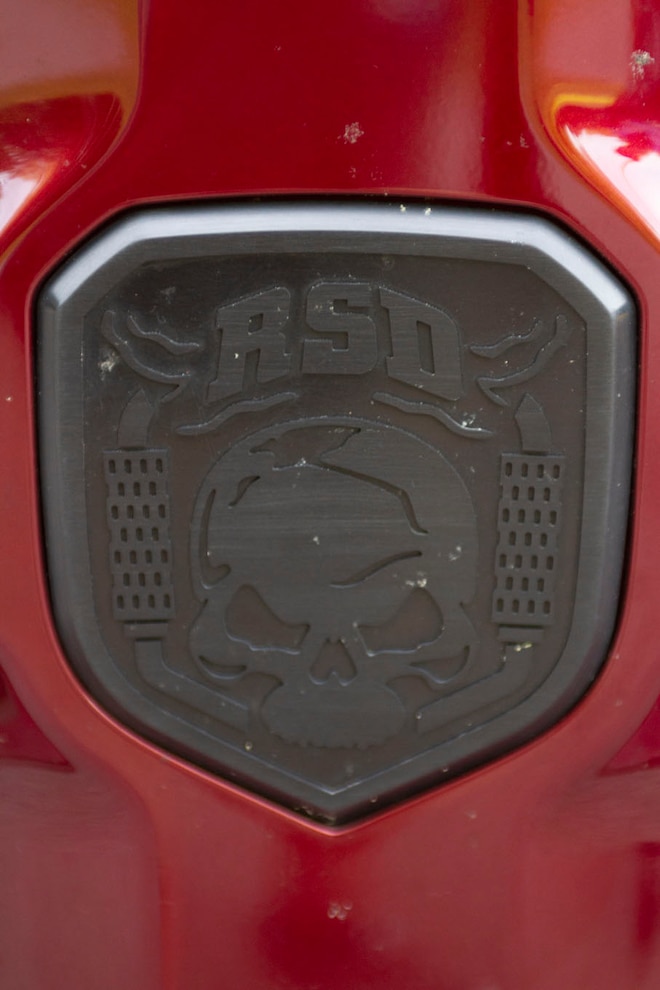 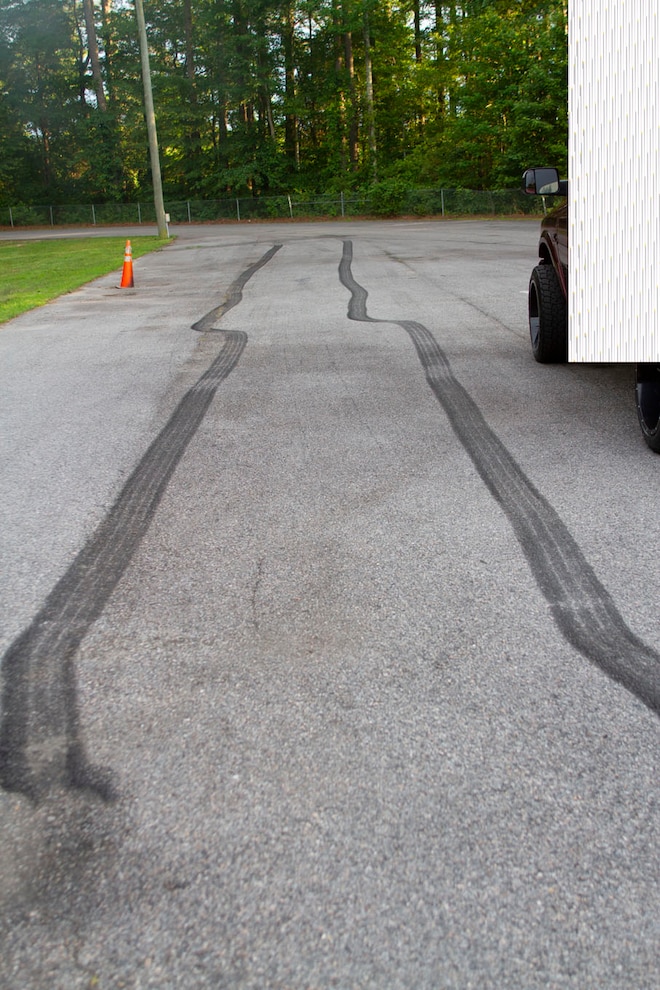