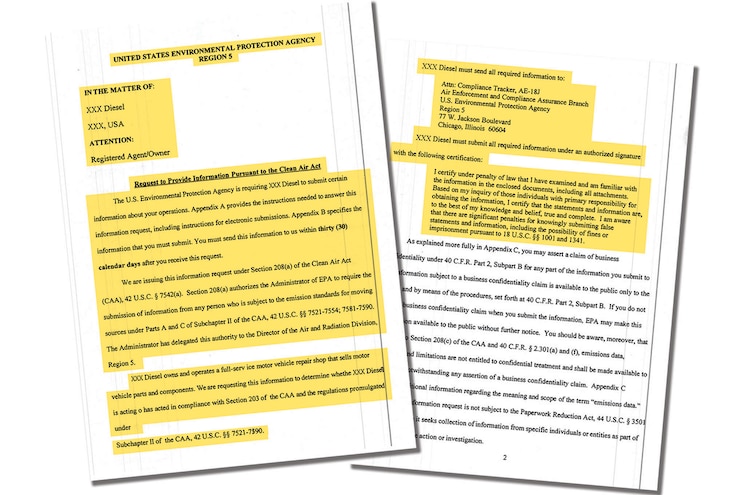 "I got a letter from the government the other day. I opened and read it.

It said " While Chuck D, lead MC of old-school rap group Public Enemy, is actually referring to a draft notice in the group's 1988 hit, "Black Steel in the Hour of Chaos," that opening line really resonates with me now.

Since June of 2019, many diesel-parts manufacturers, wholesalers, retailers/installers, and ECM tuners received their own "letters from the government," the U.S. Environmental Protection Agency. The document, billed as a "Request to Provide Information Pursuant to the Clean Air Act," is basically the first leg of what could end up being the EPA's deep dive into a company's operational practices and financials, in an effort to determine whether or not that business is or has been, well, "dirty," when it comes to following emissions laws.

I won't harp about knowing it was coming, but as I've stated before in this column, a true action on emissions-law violators (in the diesel sector) was bound to happen. The uber-juvenile "rolling coal" phenomenon was the catalyst, and as time went on, a stand would have to be taken. The feds did the proverbial math, basically, and summed up what the common modifications are—not necessarily for rolling coal, but for improving performance by going around (deleting or disabling) federally required emissions components and ECM programming and installing hard parts that are not endorsed by the EPA or the California Air Resources Board (the agency that currently blesses products that successfully meet the state's emissions standards with an Executive Order of approval. CARB's "E.O. number" is the official permission for a performance part to be sold and used on vehicles throughout the U.S. ).

Needless to say, these letters from the government have created an air of urgency in the diesel community. And that alarm has somewhat served as a call to action by several people (including me) who want this hobby to sustain and flourish.

The Clean Auto Association (yes, an intentional play on the letters C-A-A) was formed in late July 2019. The organization is the brainchild of PPEI owner Kory Willis and Clint Cannon of ATS Diesel Performance, and its primary purpose is to provide multifaceted support and emissions-compliance guidelines for the automotive aftermarket-products industry. In simpler language, the CAA is here to provide education and guidance (to manufacturers, ECM tuners, installers, marketing people, and such) on how to develop and test products so they pass tests and reach the Promised Land of passing tests and meeting EPA standards.

Trust me, the CAA is here to make a difference in the game and to help keep the hobby going. Stopping the void between the diesel industry and the EPA from growing wider is one of the group's immediate initiatives. Ultimately, the bigger plan is to develop a strong membership and a product testing and certification system endorsed by the government that will enable products meeting accepted standards to be sold, installed, and used on our trucks without any of penalty or negative consequence.

Things are in the early stages now. I'll share more information (how to become a CAA member has been a hot topic since I mentioned the group on my Diesel Power Magazine Facebook Live feed) as the effort progresses.

While Internet forums and social-media channels are teeming with discussion (conspiracy theories) about diesel emissions, letters, and reported surprise visits from the government, I suggest you tune into The Truck Show Podcast's "Emissionsisode" (Episode #88), and The Diesel Performance Podcast to hear excellent insights about what's going on, and what can and needs to be done.

Let's continue to make steam. For sure. There's no question that's what we all want: diesel power. But going forward (with new trucks, engine platforms, and so on), we all have to make sure we're doing it the right way—smoke free!