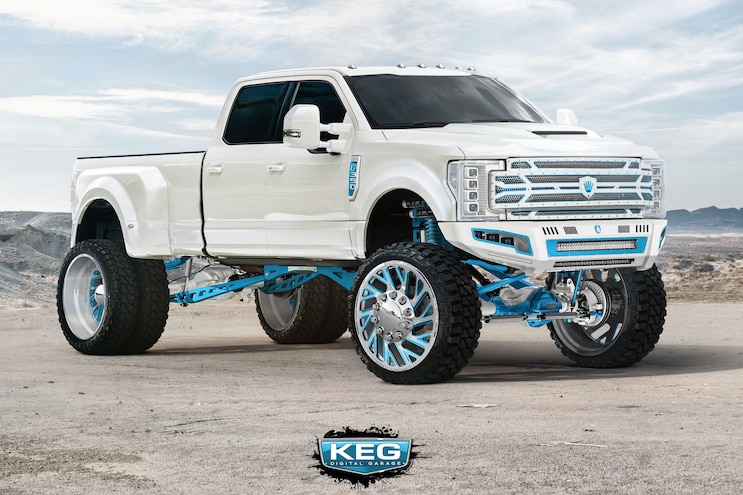 If you're into seeing the latest lifted truck builds or building a project for the annual SEMA Show, you've likely heard of KEG Media. Every year, they render all kinds of rides for owners across the country, but one thing that is unlike any of the other artists we feature here, they are directly involved in making many of their rendered builds happen each year for the SEMA Show. This year, they have 15 builds going to the massive event in Las Vegas. You can check the pages right here in Truckin magazine next year for features of many of these trucks. If you're looking to get started on a project of your own or maybe make the big jump to take your truck to the "Super Bowl for auto enthusiasts," contact them at keg-media.com for a rendering that can get you started on the right track. 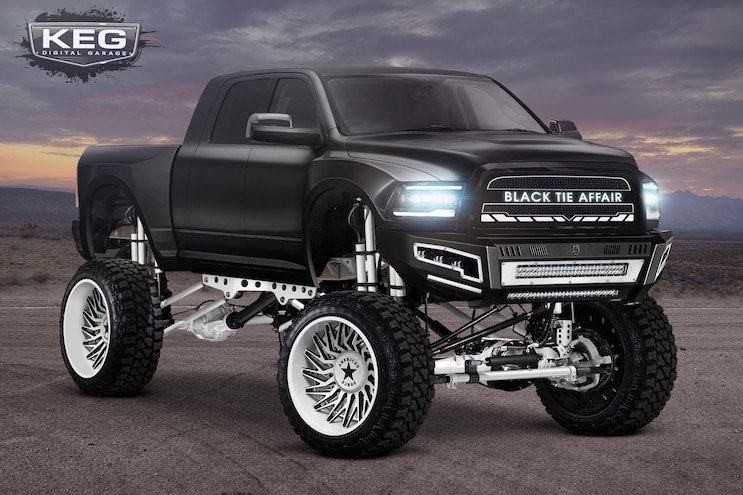 This beast, a 2018 Dodge RAM 3500 Mega Cab nicknamed "Black Tie Affair", is owned by Ryan Walker and being built by Elite Customs in Sparks, Nevada. They'll be taking it sky-high with a 16-inch Ultimate Air Ride lift with Firestone airbags, Viair Stealth Compressors and Air Lift Performance 3H air management. To give it a more aggressive look, the factory sheetmetal will be tossed out in favor of a set of Fiberwerx fiberglass fenders as well as bedsides. The black Dodge will roll on a massive combo of 28-inch American Force Wheels wrapped in 42x15.50R28 Fury Off-Road Tires. A black tie wouldn't make much of a statement without the contrasting white to complete the outfit so much of the suspension along with other removable parts will be powdercoated with Prismatic Polar White. Then, the exterior will be outfitted with a custom grille by Boost Bars, Road Armor Identity Series bumpers, Amp Research electric running boards, Twisted Pro All-Terrain LED Lighting and Alpharex headlights. Other additions to Ryan's truck will include PCS hydro assist steering, FOA Shocks and all white Alea Leather seating.

There's big and then there's huge. This 2019 Ford F-350 Platinum Dualie is already a big truck from the factory, but owner Robert Brown and Builder Select Offroad in Odessa, Texas, are going to make it a huge custom truck with a host of new products to emphasize and accessorize it. The truck is going up in the air with a PMF Suspension 12-inch lift kit powdercoated in Prismatic Powders Port Blue rolling on Fury Off-Road 42x15.50 tires that will be wrapped around a set of Specialty Forged 28-inch wheels. The stock bumpers will be swapped out to a set of Road Armor Identity Series Bumpers and a Gravel Empire Grille will replace the stock version. Other plans include King Shocks, Twisted Pro All-Terrain Lighting and Morimoto Headlights installed by Plain N Simple.