Sailing the Seas on the Blue Pearl 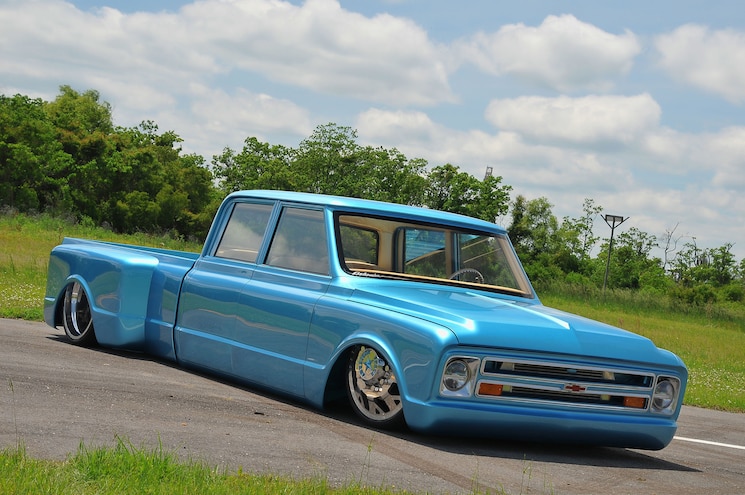 Mike Snead is a family man through and through. Born and raised on the Southwest side of Houston, Texas, Mike is the youngest of five kids. With three brothers and a sister, Mike's father started a construction company in the early sixties that specialized in site work and utilities. When Mike became an adult, he slowly integrated into the family business and became the project manager and safety director in Houston. During his younger years, he had some Chevy half-tons and did his best to make them look good but never really delved into the truck scene too deeply.
His close friend Jason Cassidy of Cassidy Customs mentioned to Mike that he was building a '98 Chevy OBS. Aside from Cassidy Customs, Jason is a country musician and planned on using the truck for touring. Mike came up with a great idea to find a truck to haul Jason's truck for the upcoming tour through the country. Mike located a 1970 Chevy Suburban truck sitting on a farm. The Chevy began as a church truck and then became a farming truck. A dovetail was added to the rear to enable the farmer to haul old equipment. 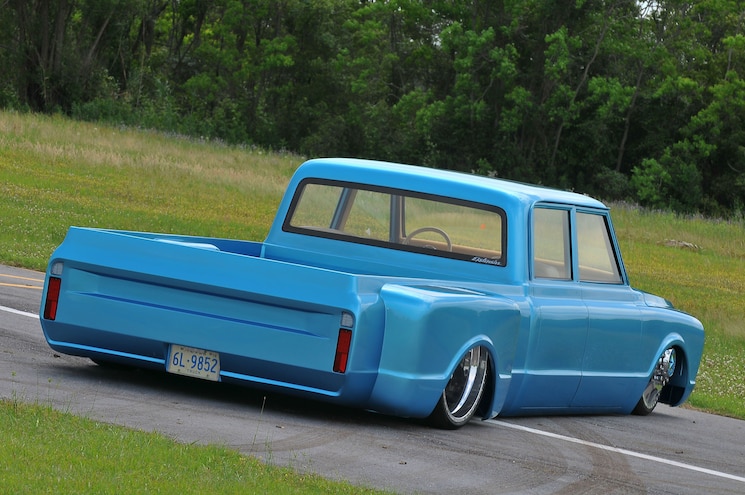 View Photo Gallery | 19 Photos
Photo 2/19   |   1970 Chevy Crew Cab Dualie La Perla Azul Rear 3q
Mike purchased the truck but had no clue which direction to go in next. In comes Ektensive Metal Works, a company that Bill Carlton founded back in '94. "I had actually known Bill throughout the years," Mike tells Truckin, "I handed him the picture of the truck and turned over the reins." At the time, Bill was searching for a new project to film on his TV show "Texas Metal" on MotorTrend TV, and it all worked out. Mike had just one request for the truck, that it would be a longbed Crew Cab dualie with a Cummins diesel. Bill and his hardworking crew knew it would be a task they could wrangle.
For the next ten months, the '70 Suburban went through more facelifts than an aging Hollywood star. First up was reworking the body since it was utilized as a farm truck and the rust and body needed to be mended. Only 3 percent of the original sheetmetal was used throughout the build relying almost purely on new metalwork. A front roll pan was built and the doors were shaved smooth. Every inch of glass was recut and flush fit. A custom bed was handbuilt and a raised floor was added. A rear Cali Combo was installed from Bob Grant and new taillights were inserted. Master Fabricator Brandon Sisco was brought in for the first step of Mike's necessities. The stock Suburban was converted by adding a new fourth door pillar, fabricated door and roof skin to make it a true four-door crew cab. 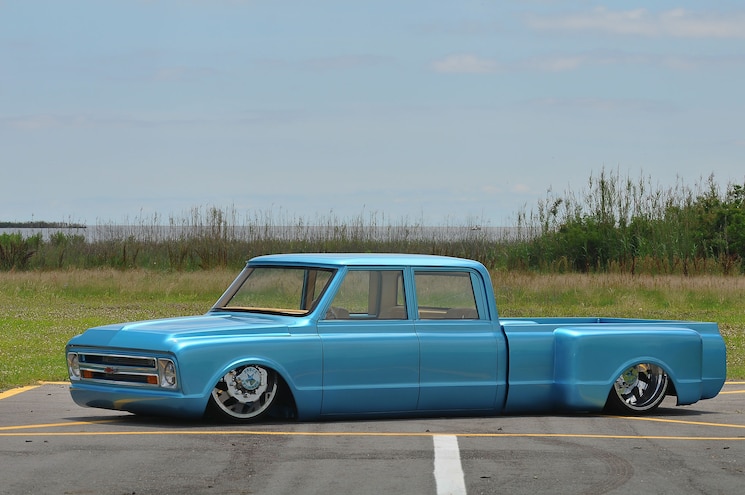 View Photo Gallery | 19 Photos
Photo 3/19   |   1970 Chevy Crew Cab Dualie La Perla Azul
Now that the body was coming out perfect, it was time for paint. Bill and his Ektensive team decided on a PPG Light Blue paint knowing that it would stand out. Once painted, it was on to the suspension upgrades. Instead of just securing the stock stance, the team decided to add adjustable suspension to the Chevy. Using a complete Ektensive chassis, a full air-ride suspension was installed using Firestone 'bags and Viair compressors. The next part of Mike's necessities was swapping over the standard 350 V-8 to a 2006 5.9 Cummins diesel. 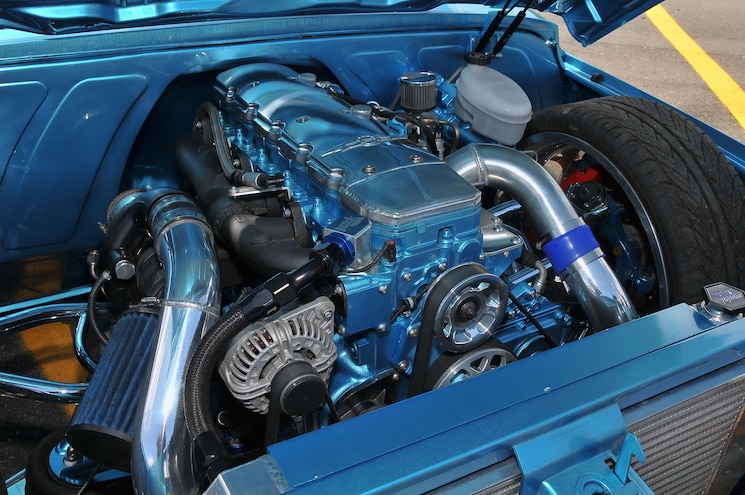 View Photo Gallery | 19 Photos
Photo 4/19   |   1970 Chevy Crew Cab Dualie La Perla Azul Engine
With everything Mike wanted now completed, it was time for Ektensive Metal Works to just show off with the rest of the build. The complete interior was hand-fabricated. The dash was wrapped in high-quality Gran Reserva leather and suede, and the custom door panels were covered to match. A custom center section was fabricated to house the A/C controls, air-ride controls, gauges and air vents. The dashpad was wrapped in sand suede as well as the headliner and custom-fabricated with a huge LED recess around the perimeter. A center overhead console also illuminated with LED lights. The seats are custom-bolstered Snowden seats with a recessed aluminum strip in the upper backrest and a suede insert. For the audio portion, Heath Moore and John Burgess added Rockford Fosgate and JL Audio products. 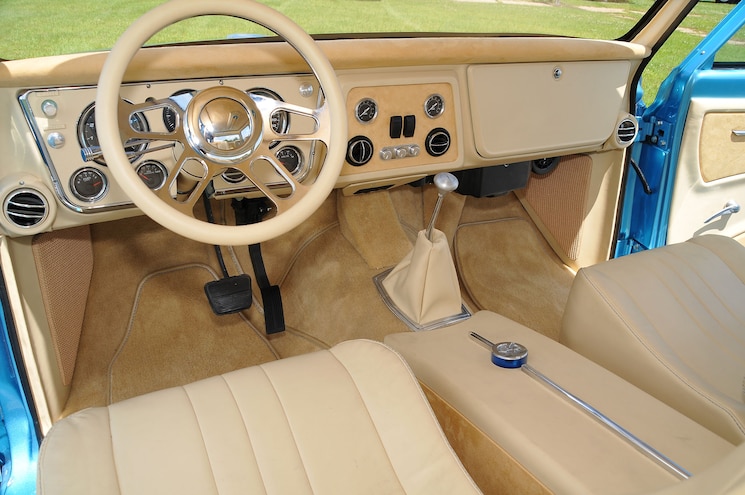 View Photo Gallery | 19 Photos
Photo 5/19   |   1970 Chevy Crew Cab Dualie La Perla Azul Interior
Once the truck was completed, Bill called Mike and asked him to come to the shop. Once Mike arrived, he was led to the back where the truck was parked for the reveal. "My daughter was with me during the reveal," Mike adds, "and she went into labor with my first grandchild while the filming was going on." Mike was speechless when he saw the truck for the first time. With no idea of the color, wheels, interior or even the shape, it took four trips around the truck to appreciate everything that had been done. La Perla Azul, or The Blue Pearl, has certainly exceeded all expectations. And instead of transporting a truck on a music tour, it's been making a show scene tour all year winning every award possible. 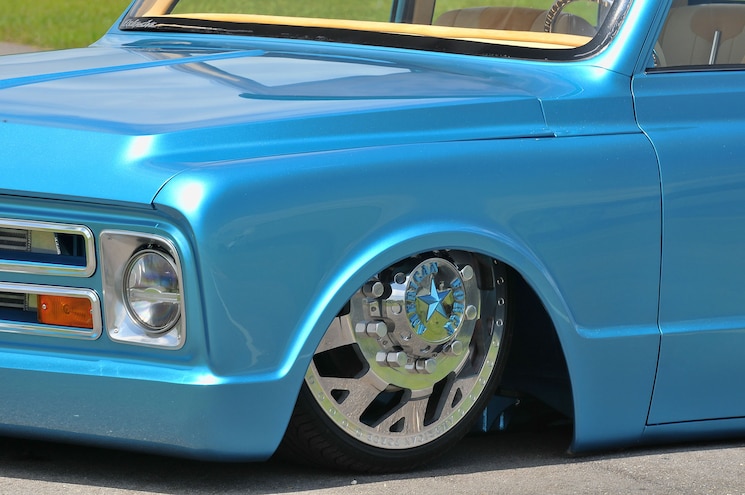